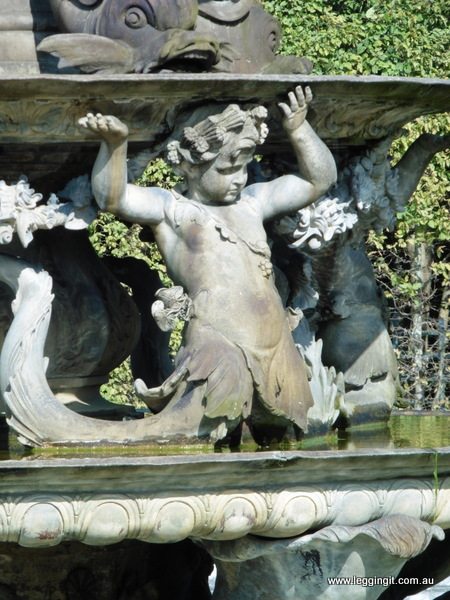 Today we took a trip out to Versailles Palace Gardens. The last time we were at Versailles Palace was in the middle of winter when we toured the interior of the palace and visited the gardens. This time we packed a few baguettes for a picnic in the gardens. Riding up the tree lined, six lane Avenue de Paris, the space of this grand avenue is the first thing that you become aware of. Then the palace comes into sight at the end of the avenue with the sun reflecting off the golden fences and gilded edges of the palace roofs. It really dominates the surroundings being set at the top of the hill. 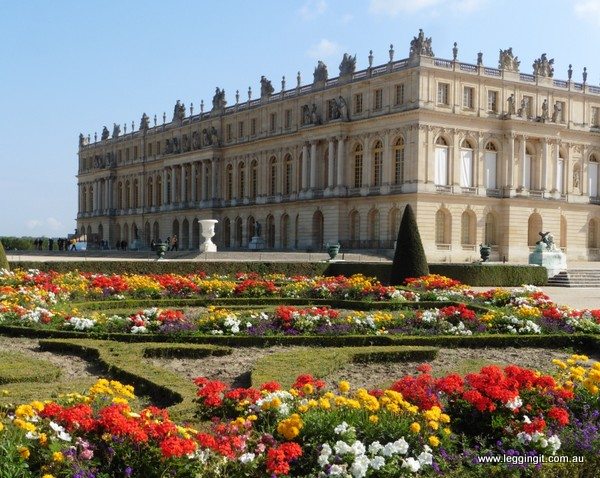 In true Parisian style we parked the bike on the footpath and headed up towards the palace over the massive cobbled forecourt. The gardens at Versailles Palace was started by Louis XIV in 1661 with his landscape designer, gardener André Le Nôtre who designed and laid out the gardens. André Le Nôtre was an accomplished designer who’d previously collaborated on the design of Vaux Le Vitcomte. His resumé include the design of gardens and parks at the Chateau’s of Chantilly, Fontainebleau, Saint-Cloud and Saint-Germain. He was the designer who actually set the style known as classic French formal.

Versailles covers a massive 800 hectares and it varies between classic french formal gardens and woodlands. so there is plenty to explore. 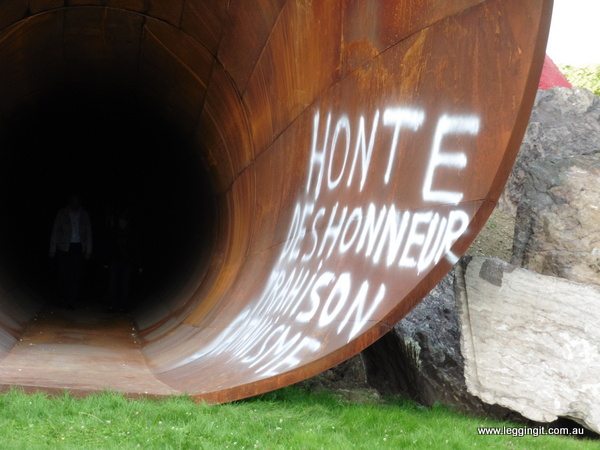 Standing up near the palace looking down the grand canal the gardens just stretch to the horizon. There was an art installation which at first glance looked like one of those witches hats or cones that they use on the roads after it’d been run over. It was made of steel and left rusty. Surrounding it were a heap of large rocks, and earth. Honestly if I was paying for it I would’ve told the artist to “get that crap outa my yard”. It seems I wasn’t the only one who didn’t like the art installation because a political group had broken in on the night of the 5th of September and painted slogans on the steel and rocks. It wasn’t painted with spray cans however, but with paint brushes in big bold letters with white paint by some french anti-semetic neo-fascist group. I know I thought it was crap but this group of wackos had a serious weed on about it and the fact the artist was Jewish. On closer examination of the art piece it actually was a long tube supposedly representing the queens vagina (bit of a long bow if you ask me) and I wonder if this caused them to write slogans about genital mutilation( Supposedly this is the second time this art piece had been attacked and the artist had decided to leave the graffiti with signs to inform viewers of its origin. The art instillation belongs to Anish Kapoor, an Indian Born Jewish artist who lives in Britain. All up there were five art installations throughout the gardens including two mirrors one of which was like a massive globe sitting atop a tripod and the other like a curved wall of mirrors from Luna Park. Another interesting part of the art instillation was a whirlpool full of blackened water called “descension”. Personally I like the mirrors but I think the positioning of a sculpture that looks like a bomb site in the middle of what should be a view down the grand canal is just tacky. 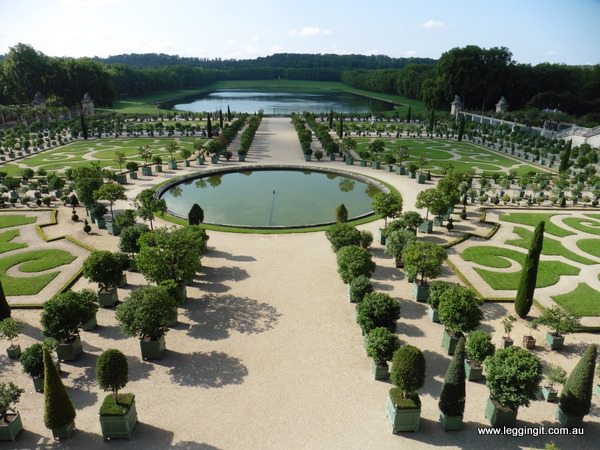 Luckily if you turn in any direction you are soon swallowed up by the gardens. Perfectly manicured box hedging, marble statues, ornate fountains and flower beds brimming with flowers all shades of the palette. The gardens were a little more colourful than last time we visited and we headed down along the grand canal and found a spot for lunch.
We’d hoped to visit Le Hameau, Marie Antoinette’s private estate but we arrived to find the place closed. Oh well time to walk some more in the lovely gardens.

The gardens are free to visit although they do have special events so you need to pay to attend them. You can find more information here
The surrounding city of Versailles, with all its renaissance buildings, is nice to wander around and even nicer to find a cafe overlooking the Palace. Most were closed which is surprising, but we found one and enjoyed a coffee before climbing back on the bike battle the traffic back to Paris.

Tomorrow we head out of town to visit Monet’s Gardens.