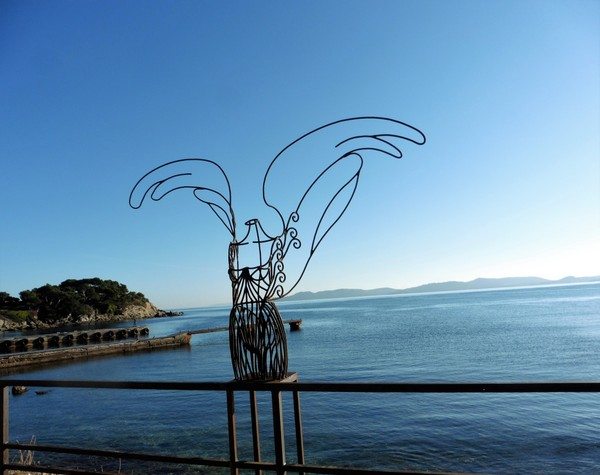 After a day out yesterday, exploring the coast around Hyeres, it was time to pack the bike again, this time to head west to Italy. 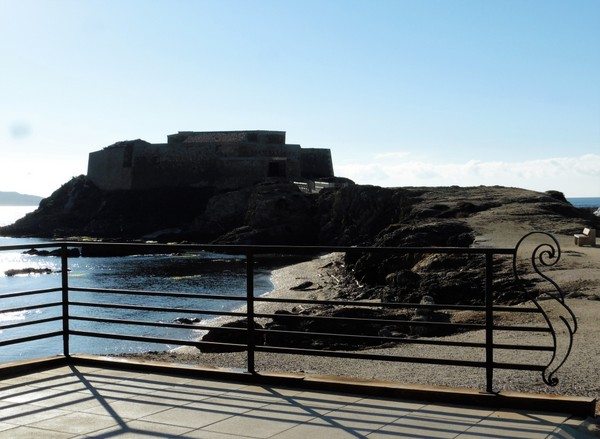 Yesterday we started from La Bergerie and explored the isthmus. It took us out to Tour La Fondue where there are fortifications dating back to the 1400’s. 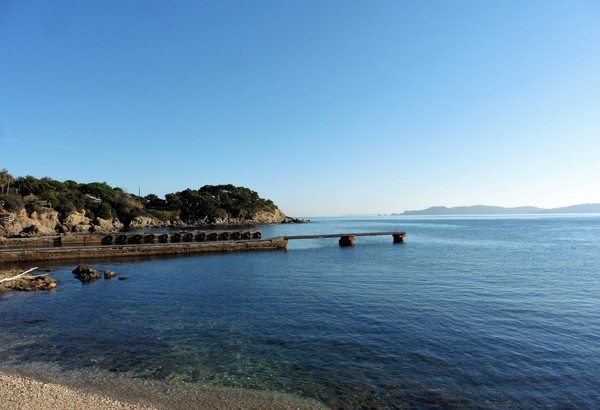 It was a lovely out of the way place to stop for a coffee whilst enjoying the views across the sea to the island of Porquerolles. 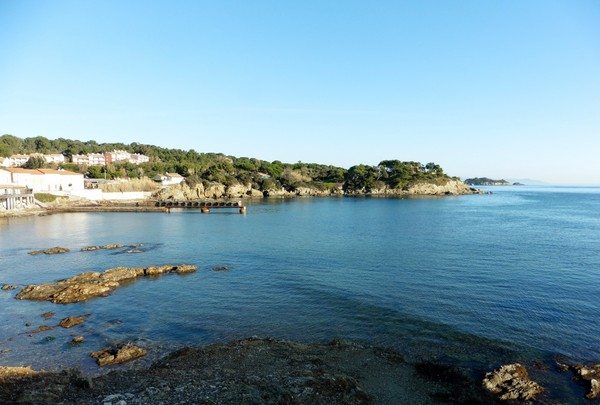 Afterwards we explored the other little villages around Hyeres, before riding along the coast up past La Carquiranne. The area around La Bergerie was used for salt production.

Back in 400 BC the Greek settlement of Olbia was established nearby at Almanarre beach. It was a trading port for salt, coral, oil, skins, and wine. The settlement was abandoned in 400 AD by which time the Romans had a firm foothold in the region. The ruins today lay between the amusement parks on the edge of Hyères. I had planned on visiting the site after returning back to the apartment but instead sat out on the patio enjoying the winter sun instead.

Today’s ride from Hyères to San Remo was planned to follow the coast. We explored much of the coast from Cannes to San Remo last year so today was filling in some of the blank areas. The ride along the coast skirted around Hyères where we passed lots of boat marinas, holiday apartments and caravan storage.
As we passed along the coast it was interesting that most of the houses were painted in pale pastels such as pink, and apricot colours. The coastal region was quite hilly with a mountain range forming a barrier with the inland areas. There were were lots of vineyards, olives and coastal forests of pine. Weaving up through the mountain ranges in low gear was fun although the visibility was not great for photos with lots of smoke from burning cuttings.

We didn’t study the map too well because we thought the road passed through St Tropez. However, the road bypasses St Tropez as it is actually around the bay from Cogolon. Oh well missed out on seeing the life of the rich and famous again.

Our first stop was Sainte-Maxime, a fairly standard coastal tourist town. They were all pretty much the same along the coast with a cluster of high rise apartments along the Main Street and a marina. They all were advertising the usual things boat hire, car hire, bike hire. As the weather was nice and sunny we sat outside watching the bikes tearing along the coast. There were lots of bikes out, all on their way somewhere else.

As we passed through Frejus we were surprised to see roman ruins. There was an amphitheatre, towers and the remains of an old aqueduct. Even in the forest on the edge of the city we could see the remains of roman building.
Along the coast from St Tropez the coastal cities seem to become larger and larger. The spaghetti junctions on the roads soon became a real hassle as the satnav kept on losing power and turning itself off. It seemed the power cable was on the fritz. It was really annoying trying to ride and keep the screen turned on. Every time it stopped it would reset itself. One reset detoured us back along the coast adding an extra 20 kilometres to the trip. With sore butts and full bladders we eventually stopped near a coastal marina to sort the problem out. While we were standing near the bike I noticed a bit of cracking on the top box bracket. The top box had sagged a bit but the bracket still felt secure. For the rest of the trip we monitored it but it didn’t fall off which was a good sign.

Once we got back on the road the satnav pointed us in the right direction but eventually it ran out of power and was dead. The only choice was to head in a general direction until we we saw a sign for Nice.

Not that we actually went into Nice. The highway skirted around Cannes and then passed above Nice. We did recognise a few places from last one we were here. 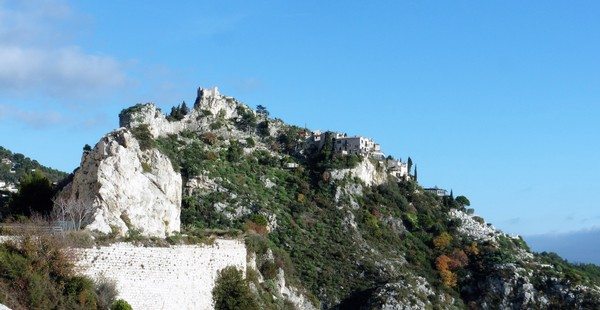 Once we hit the road to Monaco we didn’t need the satnav anyway. During our stay in Monaco last year we rode this coast many times so we could’ve ridden it blindfolded. It’s a great stretch of coast with steep rocky limestone cliffs overhanging the coast. The houses are precariously perched on the rocks overlooking the beautiful azure waters of the Mediterranean Sea.
We were tempted to stop off at Monaco for a coffee. There’s a great little place over the back of Monaco where many of the locals go. It’s away from the tourist heart of Monaco so a little more relaxed.

However, instead we headed on towards Menton with a plan of stopping off for lunch.

The beaches were pretty empty riding through Menton, although we had to laugh at the fully clothed people in sun chairs soaking up the sun. The only restaurants open were the tourist ones overlooking the beach so we decided to keep going.

The security at the border post was beefed up with armed Italian Carabinieri watching everyone entering. However, we were waved through without any hassles and were soon passing brought the coastal tunnels towards Ventimiglia.

As soon as we reached Italy there were quite noticeable differences. It was clear that the country was definitely poorer. The roads were rougher, the cars were a little older, and the buildings a little scruffier. The most visible difference was colour. After travelling along many miles of the French coast where most of the houses are painted in white, pale pastel pinks and apricot it was like someone had suddenly turned on the colour. The Italian houses were painted in bold colours of blue, green, scarlet, yellow. It was quite obvious the Italians don’t want to blend in, but rather stand out. Passing through Ventimiglia there were many examples of this.

The roads through Ventimiglia were choked with traffic with scooters zipping in and out of the traffic. It was time to really switch on and check the mirrors. One thing we’ve learnt since being on the road is that each country has different driving attitudes and rules. Even within countries people within regions drive differently. It always pays to take it a bit easily to pick up on the “lay of the land”. There were heaps of people in a lot more of a hurry than us so we just let them past and maintained a steady pace. 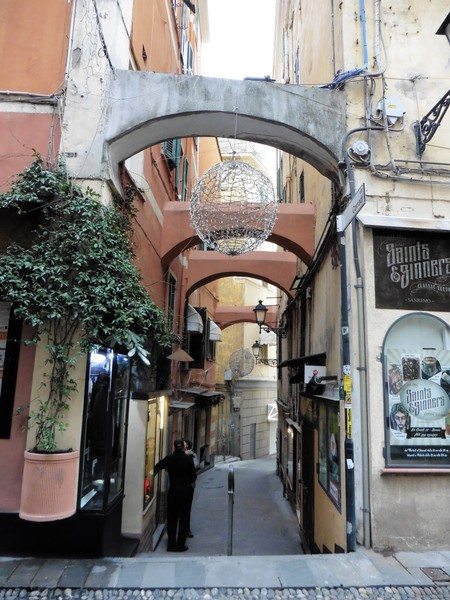 Arriving in San Remo it was nice to see the city decorated for Christmas. All down the main road Christmas lights hung and the shops were all covered with various decorations. At first we were worried that without the satnav we’d have difficulty finding the hotel.

We shouldn’t have worried for once we arrived in the centre we saw the sign in big letters hanging off the front of the building. The Albergo Malibu hotel was a small private hotel in a large building containing other hotels and various offices. After parking up outside we caught the lift up to the hotel. When we arrived we were greeted by Flavio and Amanda two of the nicest people you could hope to meet. They told us all about San Remo, what to see and some of the local traditions. 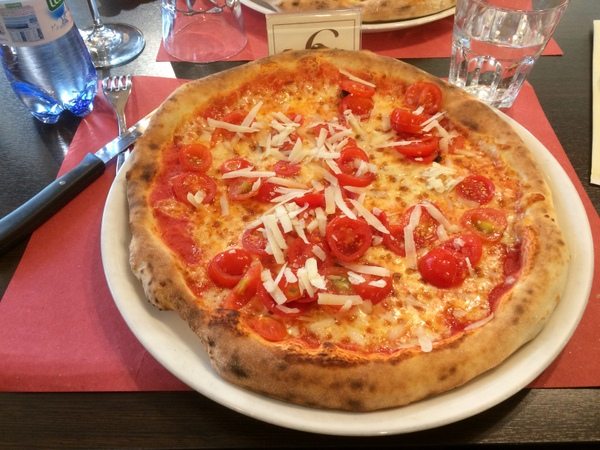 It was a lovely introduction. I unpacked the bike and we headed off for a pizza. Many places in Europe close between 2pm and 5 pm, so it’s important to remember that when looking for lunch. Luckily San Remo is a tourist city so there are a few restaurants open.

Just on dark I was able to slip down to the bike to check out the bracket. After removing the monkey face I was able to see the two securing brackets had snapped completely. They had also warped, as had the mounting bracket which also had a bit of cracking. There was a bike accessories shop open however they only dealt in Givi top boxes and this Honda bracket was specific to the model of bike. By the time I’d finished the shop was shutting and finding another bike shop over the weekend may be a problem.

All was not lost however as I did get to check out the centre of San Remo at night. The big pedestrian mall which runs from the Casino through the heart of the city is full of life. Over the next few nights we’ll check it out a bit more.