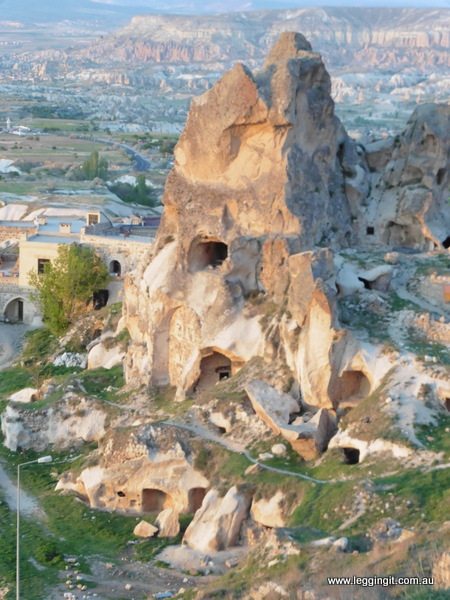 The horns started blowing on the streets of Mersin at seven this morning so there was no chance of a sleep in. Today we’re travelling from Mersin to Üçhisar in Cappadocia so we want to be off early. The horns just are an added incentive to get out of the city. It started with the Dalmus buses giving a toot to drum up business and pretty soon the cars joined in. It’s a bit unfair to make a judgement call on a city after only one night but after being in the smaller places in Turkey but we’re glad to be leaving Mersin already. It’s just too big. After arriving yesterday we took a walk around the city and down to the waterfront to Attaturk Park. The streets were pretty crowded and combined with the heat, all the cars and buses sounding their horns it’s a real rat race.

With close to one million people the city is pretty busy with a large cross section of people. It’s interesting seeing the different styles of clothes and head coverings. The ladies wore an array of different head coverings from ultra conservative black burqua, chadors, colourful niquabs, floral scarfs, simple scarfs of white cotton or they wore nothing on their heads. Women wore full length black coverings, full length coats over clothes, full length kaftans, şalvar (traditional baggy pants) or western style clothes. The older men mostly wore dark coloured şalvar with waist coats and dark jackets over white cotton shirts usually with a traditional cap, or western style clothing. Most of the younger men dressed in suits and ties, or western clothes.
After a lovely breakfast at the hotel I packed the bike and we were soon on our way picking our way through the traffic. 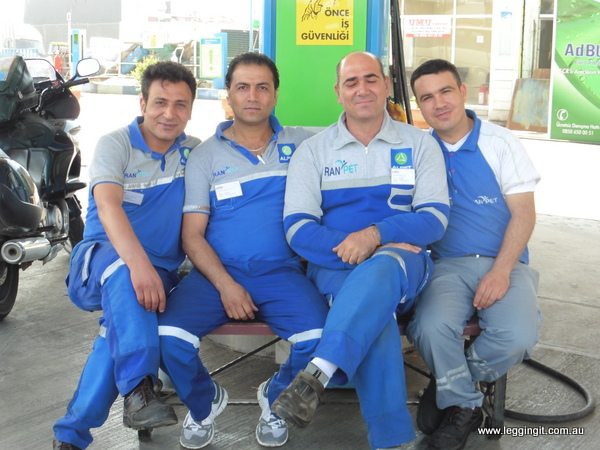 On the edge of Mersin we filled up at an Alpet which started an argument between the petrol station attendants. They were arguing over whether or not we were Australians. One guy was pointing to our flag and sticker whilst the other was pointing to our Italian sticker. They were a funny bunch of blokes who were quite interested in us asking where we were headed.

On the D400 road out of Mersin we were once again reminded of Turkish friendliness with people in cars waving and talking to us at traffic lights.

As we entered Tarsus we noticed lots of silos and a lot of wheat fields. Seeing the sign for the D750 we headed towards Pozanti. 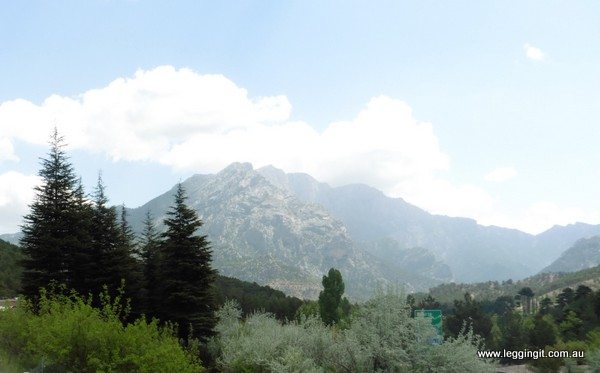 Heading over the coastal mountains the change in the countryside was quite drastic. Fields of wheat and the occasional potato crop covered the rolling hills with the occasional little hamlet with a spire sticking out. It could well be a scene from England.

The road led up into pine forested hills and we could feel the temperature drop. In the distance the snow capped Tauras mountains looked pretty cold. 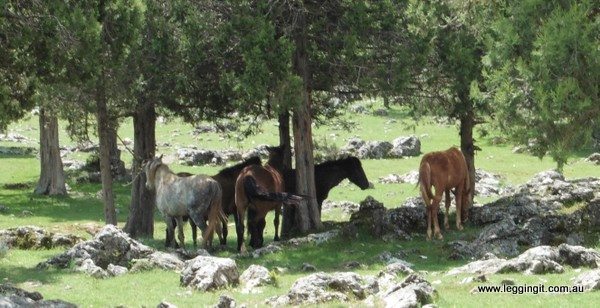 After a stop we continued on through the hills and came upon a herd of horses. One of the things that Capprodocia is known for is horses so it’s was wonderful to see a herd of wild horses. There was even a few foals.
At Pozanti we rejoined the main road and headed out through Çiftehan, where the road weaves through a rocky canyon. The landscape through the canyon seemed pretty harsh and dry with a few very humble dwellings which seemed not much more than shepherds huts built from whatever could be scrounged up. We stopped off at a massive truck-stop in the dusty town of Ulukisla for lunch. As we ate our kebabs we watched two men washing cars and trucks for about 1 or 2 TL a vehicle. They had regular customers coming and going but they were certainly earning their money.
Just out of Ulukisla we turned onto the D805 and headed towards Nigde. The road from Ulukisla to Nigde took us through rolling hills where much of the countryside had been ploughed in readiness for planting. It was dry dusty country with the only green to be found around irrigation sprinklers.

On the hills leading into Nigde thousands of pine trees have been planted and it will be interesting to see the changes once the trees are established. There were also smaller farms with apricot trees and other fruit trees.

Heading into Nigde we almost came to grief when a Kangal shepherd dog wandered out onto the road. Unlike the rest of the dogs guarding the flock further up the road this one was taking itself for a walk and almost became an ornament on the front of the princess.

After arriving in Nigde we took a ride around town looking for Mongolian and Seljuk buildings. We should’ve made better notes because we couldn’t find what we were looking for. However, we did find a bronze statue of a Mongol in one of the parks. It’s fascinating that Mongols once controlled territory from Mongolia to Turkey. 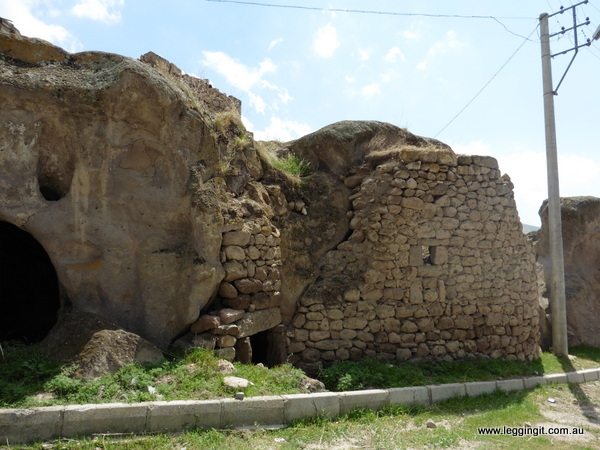 Heading out of Nigde we saw the sign to Eski Gümüşler Monastery so took a ride out. We passed a rocky outcrop which had been carved out in different areas to form rooms not realising that it was part of the Gumusler Monastery. We rode up to the end of the street before coming back to the entrance. The entry fee to Gumusler Monastery was only 5TL. 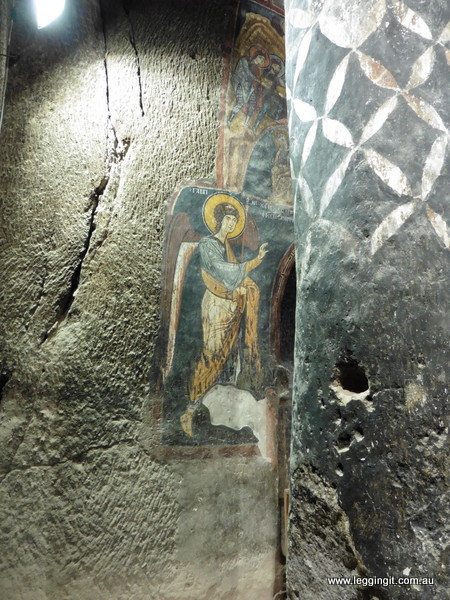 A narrow entrance tunnel emerges into an open courtyard around the courtyard are rooms carved into the rock. There are holes containing oil and water storage, crypts, kitchens, dwellings and the main church all carved into the rock. There’s even tunnels leading to underground rooms and up into upstairs rooms.
The church was decorated in colourful frescoes dating from Byzantine times between the 7th and 11th centuries. It really was quite fascinating.

Leaving Nigde we headed to Derinkuyu to check out its famous underground city. 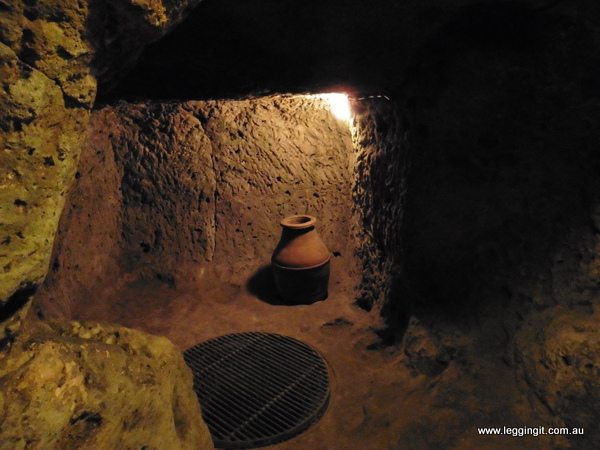 The Derinkuyu underground city extends to a depth of approximately 60 m and has six different levels. It is said to be large enough to have sheltered as many as 20,000 people, their livestock and stores of food. There were other underground cities in Cappadocia which are connected by tunnels. Supposedly the tunnel complex dates back to 8th century BC to the original people. Down brought the years the underground city was expanded with the caverns being used for storage and protection against raiders. Beneath the ground life went on with wine and oil presses, stables, cellars, storage rooms, refectories, school rooms and chapels. During the Byzantine period the tunnels were used for protection against Muslim Arab raids during the 8th – 12th century and against the Mongols in the 14th century. The tunnels were still in use up until the 20th century as a safe place for Greek Christians to hide during periods of persecution by the Ottomans.
These days electric lighting has been installed and red arrows point the way down and blue the way back up. We parked our bike near the abandoned Greek Orthodox Church, dodged the old lady with “six kids at school” trying to flog us something we really didn’t want, told the çay vendor we’d be back soon for a cuppa (the best way to get someone to watch your bike) and headed through the market place to he museum. Entry was 25 TL ($12.50 AUD) and we descended down the steps. The tunnel complex was like many we’d been in before with larger rooms near the surface for livestock. As we descended the vertical tunnels they became really low and really cramped. In these tunnels they used millstones as doors to roll across and block the passageway. We descended through the tunnel complex passing chambers and rooms until it all got a bit small and claustrophobic. In areas it was quite dark and it would’ve been scary descending into the earth with only a candle to light the way. As we followed the blue arrows we found the way out to be really tiny. I must admit I was not born the right size to be a tunnel rat and as Michele was starting to feel a bit panicky we just headed out the way in. It caused a bit of confusion to some of the people coming down but we kept a slow steady pace letting people pass until finally we reached the surface. Michele was a bit concerned that she’d spoiled it for me but I’ve been in heaps of tunnels but without the furniture and fittings they’re just holes in the ground.

We wandered back through the markets and caught up with our old mate for a cup of çay and a cool drink. It was nice sitting with all the old blokes drinking çay whilst they played backgammon and talked. The icecream seller put on a bit of a display for the tourists drumming the lid of his icecream cover with his icecream spade and ringing the bell. Dressed in a red fez and waistcoat over a white shirt he really was resplendent and very funny too.

After a quick look at the abandoned church and being nagged by the old lady with “six kids at the school”, we headed for our final destination Üçhisar not far from Nevsehir and Göreme. 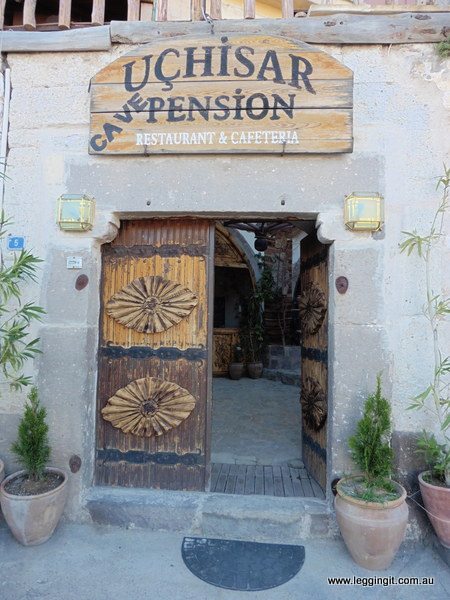 After a brief wifi stop to get our bearings we soon found our accommodation . The owners greeted us and escorted us down into the bottom level into our cave. Cappadocia is famous for its caves and Üçhisar is too. Since the earliest of times people have been carving homes out of the soft volcanic rock which once exposed to air goes hard. Towering over the Pansion is the impressive Üçhisar Castle a volcanic rock hill carved into rooms and fortifications by the Romans. 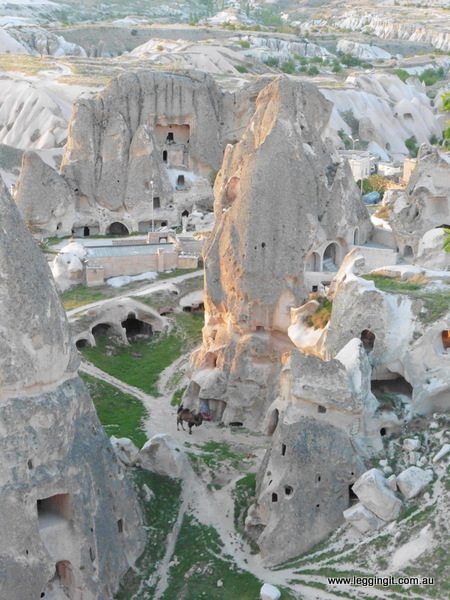 Close to sunset we took a walk around the hills to look down upon Üçhisar. The teardrop shaped volcanic rock formations are truly spectacular. With the glow of lights coming through he open windows it looks like fairyland in the valley. Tonight we have to go to bed early because tomorrow we are up up and away in a beautiful balloon as we take to the skies of Cappadocia with Butterfly Balloons. A vehicle is picking us up at 4.15 oh my god that’s early.

2 thoughts on “Mersin to Üçhisar Cappadocia”