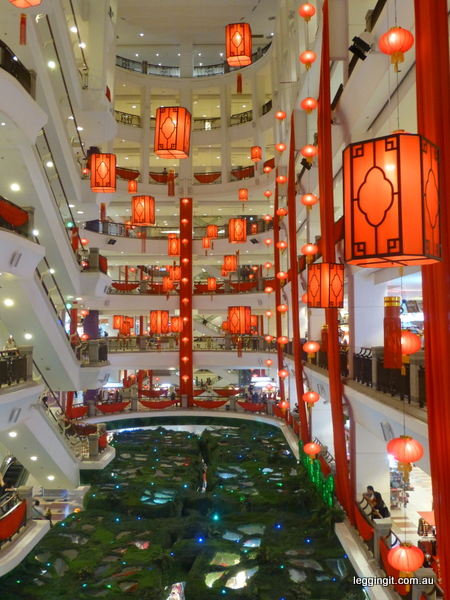 Well it was a slow start this morning after a late night, it was close to midnight by the time we went to bed and the street below the hotel was still alive. We tumbled out of bed about 8ish and then looked at our plan for the day. A cold shower set our first agenda for the day, to sort the room out!

Down at reception we had a really efficient staff member who contacted housekeeping about our wrong size blanket (a single doona on a double bed) and no hot water in the room.) He also sorted out our bookings and we soon left the hotel feeling confident.

Next stop was breakfast. We decided on a little alleyway restaurant and soon were tucking into one of the nicest Egg Roti canai we’ve ever had, it was soft and fluffy and really delicious. It had side bowls of spicy chicken, spicy gravy, a mixture of carrots, potato and okra and a spicy sambal that’d wake the dead. Michele liked the look of the roti and was soon aiding me getting rid of it. Soon her Murtabak arrived and a delicious indian breakfast was consumed, washed down with icy cold mixed juice and Teh Tarik. Another thing I noticed on the end of the table is prepackaged Nasi Lemak. It comes in a brown paper pyramid and all you have to do is open it up and eat it. I had one yesterday at the Old Town Coffee house under our hotel and it was really tasty. As in most food places in Malaysia you pay after you’ve eaten so if you want one you just open it and eat it then pay later.

Next stop was KL Sentral where we had to rearrange our train tickets to Thailand. The service at the long distance trains is excellent. They have a help desk where they evaluate how best they can help you then give a number and within minutes you are talking to ticketing staff. We had a most efficient young girl who rearranged our bookings. We tried changing our bookings to Hat Yai (Thailand) from today to Sunday but weren’t able to book sleepers, which meant we’d be sitting for 14 hours which was a bit too long. We decided to change our plans and spend three days in Penang before going on to Bangkok instead, so booked the train to Butterworth and then one from Butterworth onwards to Bangkok. We had a laugh when the girl said the fare we’d already paid would be reimbursed into our account within six…….. months. hahaha and then gave us a number to follow up if it hadn’t happened (as if we will remember that one)
Accommodation and travel sorted we hit the monorail and headed to Imbi station which adjoins Berjana Times Square shopping mall.

Then it was time to start exploring KL. BTS Shopping Centre of course was massive. One of the hidden gems about this place and one of the reasons we were there is that it has a musical staircase. That’s right you step on the stairs it plays music… Well it’s actually black and white steps like a piano and when you walk on it it’s like a piano keyboard. It was hilarious watching unsuspecting people walk up the stairs and then get a puzzled look “like where the hell is that music coming from…. Wait its my feet every time I step on a step it plays a note” lol then of course there was the people jumping from stair to stair trying but sadly failing to play “Chopsticks” ah yes good times….lol
And what does every shopping centre need so mums can shop in peace? A cinema.. Check, A bowling Alley….check, An indoor archery range…. Check, how about an indoor fun park complete with Roller coaster…Now you’re talking,……As Joliet Jake said in The Blues Brothers “man this place has got everything”

Apart from being massive and full of boutique expensive shops its also home to the Guiness Book of Records Worlds Largest Capsule Vending Machine. Just standing under this monument to those useless little plastic toys that would end up behind the lounge, half chewed up on the back lawn from the dog or stepped on in the middle of the night causing cries of pain and waking the neighbourhood, made me look on in wonder……. I wondered where could i find a ladder to put the coin in the slot. 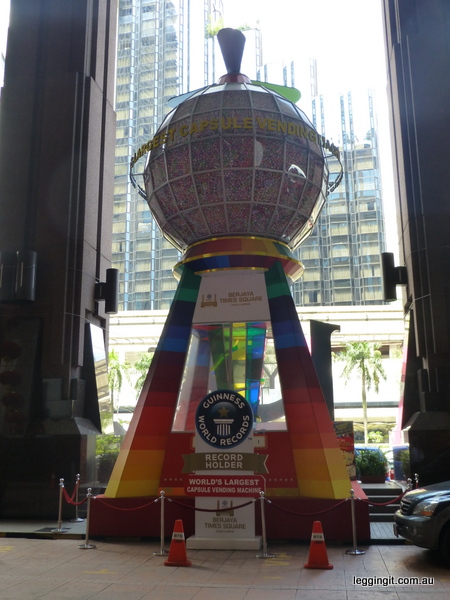 We decided to catch the monorail to Bukit Nanas to visit the Petronas Towers and after purchasing our tokens Michele headed up the stairs to platform 2 and boarded the train. Little did she realise the train to Bukit Nanas was on platform 1. I was trying to go up the stairs everyone was coming off the train and when I arrived at the top she had already left. Hmmm the immediate situation, I was carrying the bag so she had no money, no phone, just a train token. Thinking she would notice me missing and disembark at the next station and return I waited for her return (which was not to be). After 2 trains arrived my next thought was she may have disembarked at the next station and waited for me to catch up…..so checked that out…. Nope. I retraced my steps then decided that she’d just caught the train back to Sentral was either waiting at the station or had gone back to the hotel. I caught the monorail checking each passing train as best I could until I was back at Sentral…no sign of her….of course. Luckily the hotel was just around the corner and a few minutes later I arrived back at the room to find her propped up in bed on the net….. She’d sent a message to our daughter to message my phone….this is starting to become a habit (check post 18 August 2013 Pangkor Island)

Lessons learnt carry a phone and some cash next time…. And stick closer to me because I know where I’m going…..lol

After a few hours of chilling we decided to head out for Indian. Although there’s a few close by there’s a place we were taken to by Charles during our KL Food Tour a few years back that’s really good. Two meals served on a banana leaf with side dishes of chilli fish, chicken and spicy mutton what a treat
.
Then it was home to do the washing and sort the website out with the assistance of our daughter on Skype. Gotta love and hate technology it makes it so hard and so easy. Ron

3 thoughts on “She’s Legging it on the wrong train……. Exploring KL”