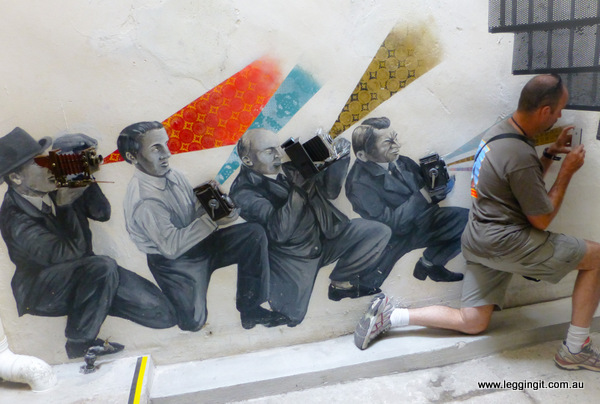 This morning the biggest decision was whether to have a swim or breakfast first…the swim won and we eventually headed over to our breakfast hangout about 9.30, just in time for their rush, motorbikes pulling in for takeaways and the place was full. We managed to get a table and before we had even sat down one of the young men came over ‘same as yesterday?’ We just smiled and said ‘Yes please’ and before we knew it breakfast was served.

We then headed off to check out the new Penang Camera Museum, on the way we spotted another abandoned building. This one still had the worshipping things there almost like they had just packed up and left.

The Penang Camera Museum is advertised as having over 100 antique cameras, so we were looking forward to spending some time learning a bit more about cameras and photography. The entrance was 20rm (about $6 Aus) which may seem a bit much for Malaysian prices but we were willing to give it a look.

We were welcomed at the door by a lovely young lady who explained there was a tour in 20 minutes, I had read there was a coffee shop so we headed there for a really good coffee, there was a great selection of cakes also but we resisted. The building itself is a work of art, lots of quirky sayings and artworks. It also had a wonderful exhibition area that had photos of Myanmar that were stunning.

We were called for our tour and climbed the stairs into the exhibition area, it was mazing to see cameras from the 20th century. Our guide was really informative about the different cameras, their eras and how technology had changed. There was also the oldest camera , made in France and basically the man sat with it and the subject sat opposite, their reflection was reflected onto the page through a lens and he then drew it. This as you can imagine was a long process so they had to sit for a long time to have it done. This area also had a selection of cameras you could play with and see how they operate.

They then had a section on spy camera which was fascinating, lots of tiny cameras used by spies from different countries. In this area they also had a Machine Gum camera used by the Japanese in World War 2 to take photos of the enemy. From afar it looked like a gun on the side of a plane yet they were taking photos of where all the ships were so they could come back and bomb them later.

During the tour we also got to see how a darkroom worked, how an obscura camera worked and also a pinhole camera.

All in all it is a great place to visit, you learn, you laugh and you reminisce. I also think it would be fun for kids so they can experience the ‘olden days’ in a hands on way.

Our visit we discovered there was a huge traffic jam, as seems to happen in Malaysia a car had double parked and then gone off, a truck approached and couldn’t reverse as there were cars behind them and the traffic the other way was looking jus the same. I never have to worry with Ron he spotted a narrow alley and we were off along with a couple of others on a bike, they then were calling out giving us instructions on how to get through the maize of alleys, that over we headed to have some lunch, another hard decision here in Penang with all the choice..indian, arabic, peranakan or chinese. As we were driving along we saw a food hall full of chinese people leaned over tables eating so chinese it was. We walked in and were handed a menu explaining all the dishes available Ron ended up with the old favourite Char Kuey Teo (stir fried noodles with a variety of things added), I had a omelette with ginger, prawns, pork and beanshoots and we both had a fresh lime juice. It was so funny to see the locals faces when we ate with chopsticks so well, they seemed almost disappointed that they were missing their lunchtime entertainment.

Back on the bike we headed of to see a Hindu Temple but took the wrong turn so decided to head around the island for a run. IT was a beautiful afternoon, a few chats at traffic lights with fellow riders, a quick stop for fuel where we met a lovely young lady, a stop to see a waterfall and finally another stop at the Snake Temple for a drink and some pineapple.

Home for a swim and before we knew it dinner time had arrives, back on the bike we headed to the New Park Food Court to try and tick some more off our food map only to discover it was dead, seems to be a day only place. We then decided to go to Guerney Lane to enjoy some of their hospitality. We chose a couple of dishes, one we have no idea what it was but there was a lineup so we thought it must be ok sort of noodles in a soy sauce with chicken and bok choy. The other was stir fried oysters, squid and prawns which were really nice. The finale was a mango, milk and sago frozen drink, it was really refreshing but5 a bit odd as the sago froze up as it sit there so went from really soft to crunchy.

We were heading home when I spotted some chinese lion dancers outside a restaurant so we did a quick uturn and watched their performance. We have no idea what it was about but it was wonderful to see.