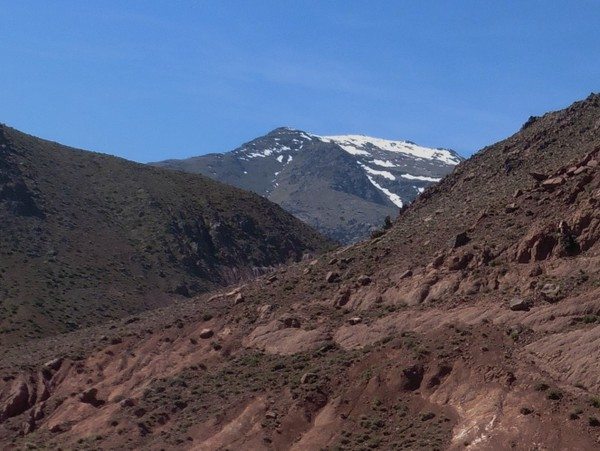 Heading south to Ourazazate took us back over the Atlas Mountains through the Tichka Pass again. It wasn’t quite as beautiful heading south maybe the light was different or something.

About 100 kms from Ourazazate we stopped for a broken down car. Expecting to maybe give the guy some water it turned out all he wanted was for us to deliver a note to his cousin in Ouarzazate to tell him that he’d broken down and to send a mechanic. Odd request but phone coverage in the mountains was pretty bad. He even drew a mud map so we’d find the place.

We wondered how many people he’d given a note prior to us or whether we were the only ones carrying a note. As we’d told him we’d deliver it we couldn’t really just ignore the request so as we reached Ouarzazate we turned right instead, onto the road to Zagora. The road took us past an old Kasbah overlooking a river lined with palm trees. A couple of km’s up the road we found the address and delivered the note to his cousin. He was a nice bloke who invited us in for tea and a chat. 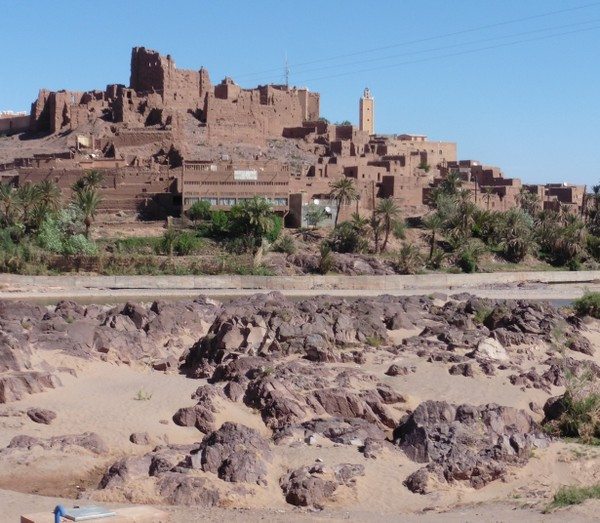 All up we spent three nights in Ouarzazate at Residence Rosa in a self -contained unit with two bedrooms, massive lounge room, and kitchen. At $30 per night with breakfast it was a bargain, with enough beds and couches, it could’ve slept seven. The breakfasts were really good with fresh crispy baguettes, coffee, freshly squeezed orange juice, panna chocolat, and scrolls. Yum yum.

On our list of things to do was check out the Cinema Museum. It’s across the road from the Taourirte Kasbah in the main part of town. The Kasbah has had a bit of renovation works recently and looks really picture perfect.

Ourazazate has a long history as a cinema town with Game of Thrones, Gladiator, Jewel of the Nile, a few other big and a number of smaller movies shot in and around the town and the museum itself is an old set for a few movies. Built back in 1981 by Italian film company CLAS it was the setting for a number of biblical films with different setups in the various buildings. It was interesting wandering around through the buildings of the museum which looked they were built of solid stone but where actually built of wood covered in bamboo and plastered over.

There are two movie studios in town so we took a run out to check them out. The review of ACL was pretty poor so we went to Atlas Studios to find it deserted. We headed back over to the ACL studio and the review was right it had seen better days. It looked like everything was falling apart so we just jumped back on the bike and decided to go for a ride instead.

We decided to take a run up to Ait-Benhaddou but of course didn’t check the map beforehand as we thought we knew where it was. Heading out towards Skoura we turned off onto the R307 and headed towards the High Atlas. It was snowing on top of the mountains so the sky was crystal clear and air was absolutely freezing. How cold was it? Well the shepherds we passed were snuggled down in depressions in the rocky ground rugged up in their Jellabas, trying to escape the biting wind with not even their heads showing above ground.

As we started climbing into the foothills it was apparent that we weren’t anywhere near where we were supposed to be, but the ride was just too beautiful to care. The road wound its way up into the mountains with the occasional rockslide or erosion undermining the road reminding us to keep our mind on the road.

Once again we amazed at the colours and different rock formations of the countryside. It was great fun just being at one with nature cruising through the hills seeing only a car every 30 minutes or so. There were only a few villages along the way as most of the land wasn’t arable just the occasional patch along the river. What was most amazing was that every now and then we’d see a local sitting by the side of the road waiting for a lift. I suppose they were working on Moroccan time so would sit there until a vehicle appeared.
Another crackup was seeing a chai wallah in the middle of nowhere, just sitting by the side of the road armed with a battered yellow enamel teapot, a couple of glasses, and some boiled eggs.

About 70 clicks up the road we decided to head back to town for lunch and riding back was almost as good as riding up, however the wind was in the opposite direction and it was even colder.

We found a nice little local cafe which was heaps tastier and half the price of yesterday’s lunch at the Greek restaurant. It also started us thinking how lucky we are living in Australia with all that great food from all over the world. Man we are spoilt for choice.

It was pretty late in the day but we decided to take a run up to Ait-Benhaddou. The main road was insane with heaps of trucks, tour vans and crazy Frenchmen driving camper vans like they were possessed. A few times we were forced to get off onto the gravel by 4wds too scared to get off the asphalt.

Ait-Benhaddou is famous as one of the towns made from mud, well actually rammed earth. It was interesting watching some of the locals busy building rammed earth walls using techniques which wouldn’t have changed much over the years. There’s lots of rammed earth buildings throughout this region and although there are lots of brick buildings going up. It is good to see that skills to build and repair rammed earth buildings hasn’t been lost. 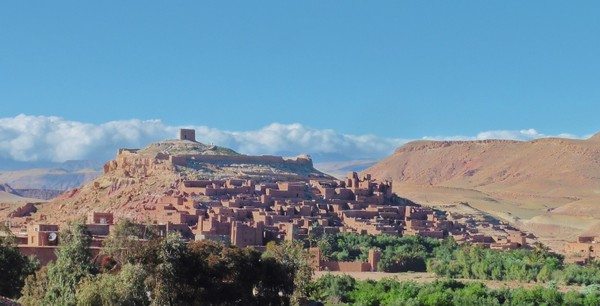 Tomorrow we head south to Zagora on our way to Mhamid on the edge of the Sahara.