After breakfast at the apartment we headed into Olomouc, the former capital of Moravia to check out the city. It’s interesting being a passenger in a car after all this time on a bike honestly, we are starting to miss the bike already. The upside is we’re really enjoying travelling with Gerry and Deb. Arriving in the city centre we drove into the market square and pretty soon had the locals waving at us. We gave them a big howdy wave only to find they were waving that we were going the wrong way. Maybe we should make a u-turn and park the car. The police just happened to be wandering by and politely told us there was no parking in the square. Luckily there was one close by so we didn’t have to walk far.
Gerry had been watching Rick Steve’s adventures in Czech and had heard about the famous smelly cheese which is a local favourite. Seeing a local deli exhibiting all sorts of cheeses in their window Gerry was sure this was the place we’d find it. Gerry got his phone translator app and typed in “could I taste your a local Famous smelly cheese?” or something similar. There must’ve been something lost in translation for she handed us all a piece of Parmesan. Delicious but not what we’re looking for. 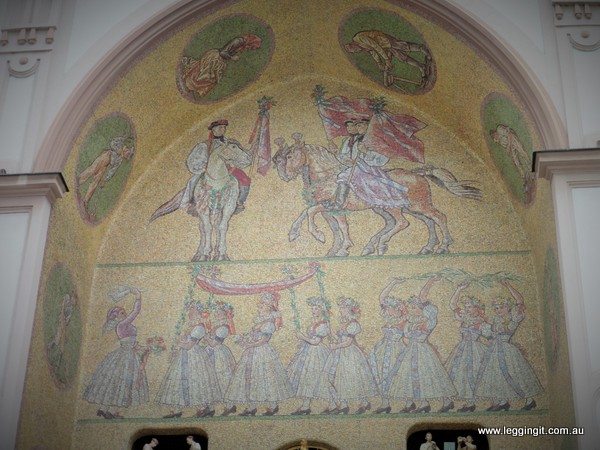 The Town Hall is an impressive building with its bulb topped tower and the famous astronomical clock. The 14 metre high clock had its origins in the 1400’s but when the Nazi’s were retreating during WWII they blew it up. After the war during the communist rule it was repaired to reflect current values. 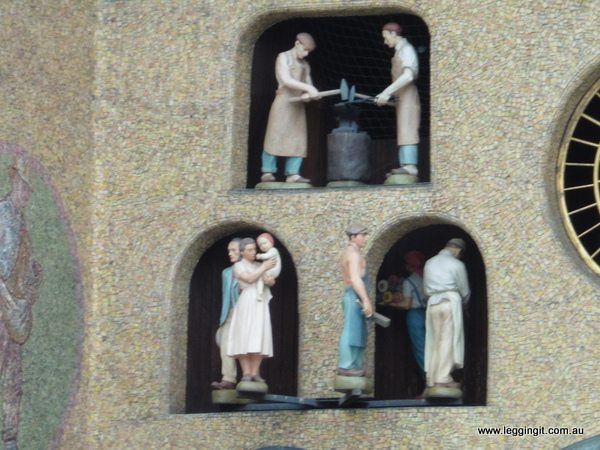 The background mosaic is of the seasons of the year and two local festivals, the procession of maidens and the ride of the kings. The little figures of saints which used to rotate at the top were replaced with the real heroes of communism, the workers.

Every thing you need to know is on the clock minute, hour, day, month, year and phase of the moon. There’s a star map, the sun, earth and planets against the different signs of the zodiac. At the very bottom on the dial on which saints days and local birth name days are displayed the saints have been replaced by heroes of communism.
We were at the cafe overlooking the clock at midday to watch the performance. Little blacksmiths started the show hammering on tiny forges, before a procession of tiny figures featuring athletes and workers slowly rotated. Firstly on the left then on the right before both started slowly spinning. Meanwhile the glockenspiel slowly hammered out a traditional tune. Judging by the crowd around the square the clock is a real favourite. The finale however, had us all in stitches. The golden rooster which sits atop the monument slowly flapped its wings and released a strangled crow.
Around the square are a few fountains Caesar (who founded the city), Neptune (who protects the city from floods), Hercules (who protects the city as he holds a chequered Eagle which is the symbol of the city) and the really cool Arions fountain which represents the rescue of Greek poet Arions by a dolphin. It also features some turtles som in the water and one out in the square. It was interesting watching the locals interact with it. Kids would sit aside its huge back whilst older people would simply pat it’s head as they walked past. Maybe it’s a local custom for good luck.
Also in the square is the Marian Plague monument which is supposedly the largest plague monument in the world. It was built after the plague which struck the city around 1715 as a memorial to those who died but mainly in gratitude by those that survived. It features lots of saints and is topped by a gilded Virgin Mary. 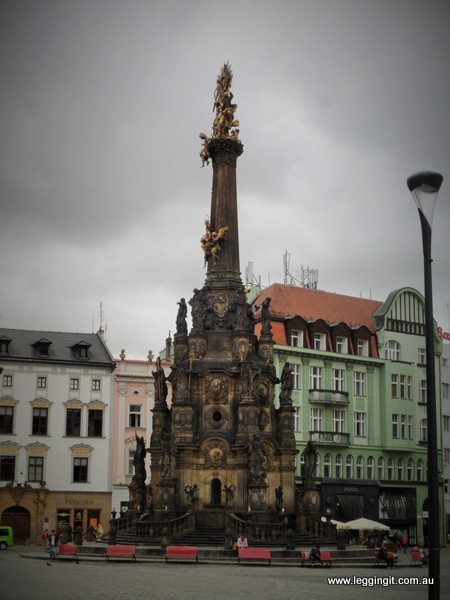 In the other part of the square (it’s odd when a square is not actually square) is the holy trinity column complete with apostles, saints and heavenly beings. Supposedly it’s a favourite with locals because everyone involved in its construction from designer down were locals. 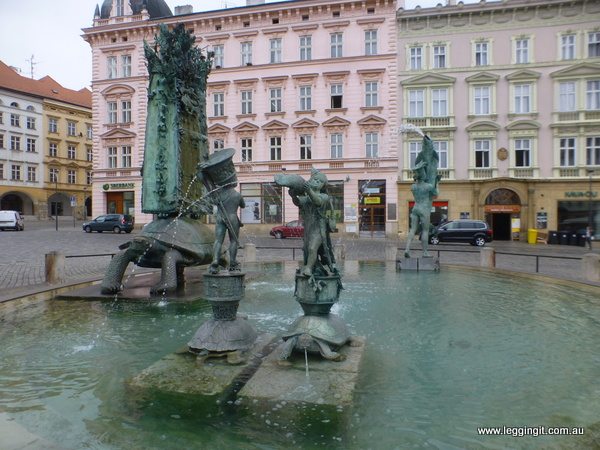 Around the square cafes front beautiful old buildings. Continuing up the Wenceslas hill we visited a few churches and chapels with beautiful baroque interiors. Olomouc must’ve been really prosperous to have all the stately buildings. St Wenceslas Cathedral which dates from 1131 was beautiful mixture of gothic and Romanesque styles. In the cathedral is the chapel to Jan Sarkandar who was accused of betrayal and tortured during the bohemian revolt for not divulging what was said in confession. He was canonised by Pope John Paul.
We took a trip out of the city to Holy Hill (Svaty Kopeček) to visit The Church of the Visitation of the Virgin Mary. When we arrived signs pointed to a carpark along the road so we of course parked. The signs in the carpark read that the park belonged to a local restaurant and you’d be fined to park there. It was one of the times when you’re unsure whether you should leave it or not but finally as the restaurant was looking deserted we just left it. 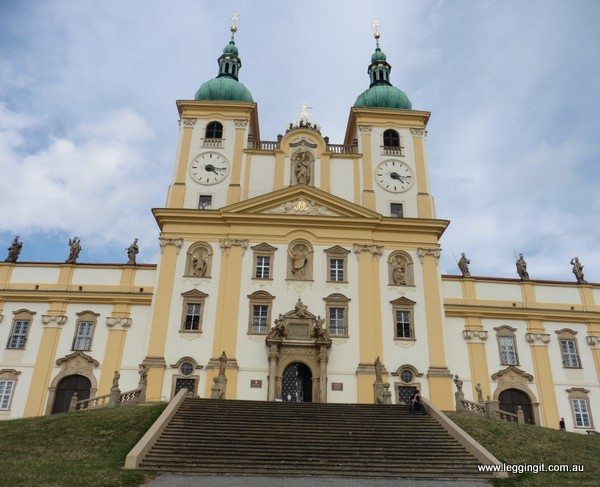 The church sits high on the hill overlooking the city of Olomouc. The name of the church refers to a local Jan Andrysek who was shown the place in a dream by the Virgin Mary, hence visitation etc. The church started in 1629 and became a place of pilgrimage over the next forty years. The present church which replaced the older church dates from 1721 and includes a beautiful baroque style facade. The facade consists of two dome topped bell towers complete with clocks (which look like a pair of “I dream of Genie” bottles). The cloister which stretches out either side of the facade is topped with statues of saints like silent sentinels. 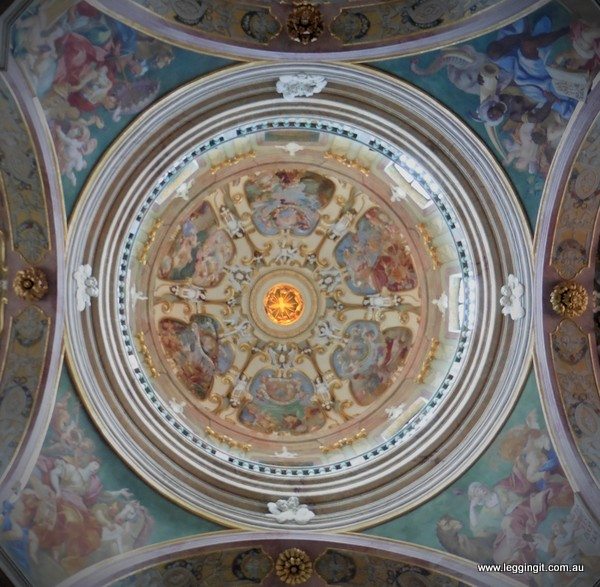 Inside the church has to be seen to be believed as it is filled with frescos, statues and intricate crafted decorations.
Late in the afternoon we headed back to our communist style apartment block amongst all the other communist style apartment blocks. It’s been interesting staying there as its like the owner just got up and left with food still in the fridge and all their belongings still in the apartment. It was advertised as a two bedroom apartment but one bedroom fits a double bed with no room to spare on any side and just a curtain for privacy. In the bathroom the boiler is situated right in the centre of the bath so having a shower is a bit like a contortionist act. Not that people have showers as such. It seems in Europe most people have a shower hose and wash themselves while standing in the bathtub. Just something to get used to.
During the day after lots of searching Gerry was able to find the Olomouc famous stinky cheese, yes syrečky cheese, in a vending machine at the tourist bureau. To give you an idea about syrečky cheese. The European Union tried to ban it but the Czech government had to negotiate to continue to produce it. Syrečky cheese is produced from rotted milk aged under hunks of meat to give it it’s unique flavour. Not surprisingly non-Moravian Czechs reckon there are two types of people Syrečky cheese-lovers and sane people. Lets just say we could still smell it with the fridge door closed. Our opinion after tasting it, well…… Michele decided it was ok but quite salty…Ron is not a fan.

Tomorrow back to Prague the cheese isn’t coming with us.