Once again we started the day with breakfast at the Hotel, because the food is fabulous. Then it was onto the tram and off to Prague Castle (Prazsky Hrad). The new Skoda trams which are mixed with the older quaint communist era trams are really clean and comfortable. The tram stop was right outside the castle gates and we were lucky to witness the changing of the guard. Guards in light blue safari style uniforms with white tshirts showing at their open collar stamped their feet and slammed the butts of their rifles into the cobblestones in a fabulous display of rifle drill.
Entry’s free to the open parts of the castle so you can wander around the buildings and grounds which are quite stunning. We headed for the ticket office which was pretty haphazard with long queues and no real movement.

There’s all sorts of tickets to get into the castle but we wanted to check out St Vitus’s Cathedral (Katedrála sv. Vita) so included was Basilica of St George,Golden Lane, Old Royal Palace as well as Prague Castle for 250 Kč. 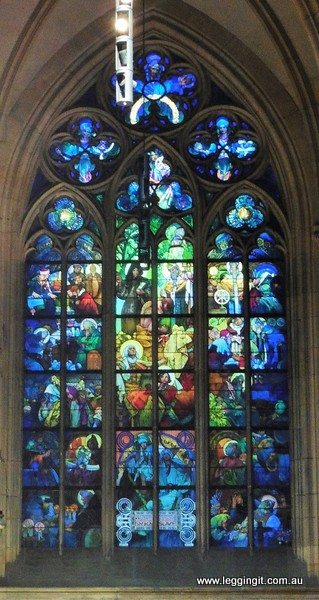 St Vitus’s Cathedral (Katedrála sv. Vita) was started in 1344 and is built in gothic style with high ceilings, big windows. gothic arches.
For the budget traveller the first 15 metres access to the cathedral is free and there were plenty of people trying to sneak past the cordon but you do miss some stunning things by not going in. 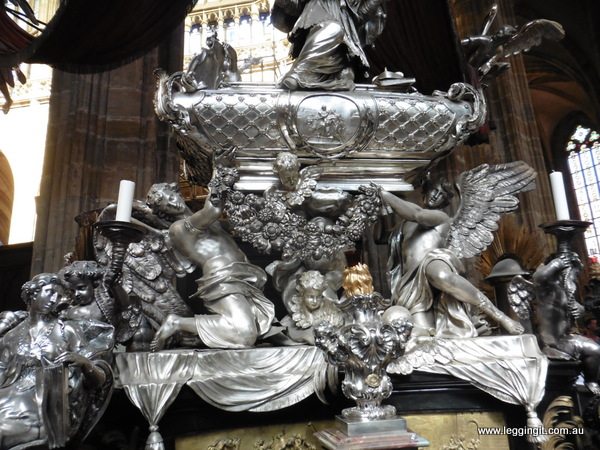 The cathedral is the last resting place of St Wenceslas and in the Chapel of the same name, the relics of the saint are kept. The room was built in the twenty years after the church started with the lower part of the walls are decorated with over 1300 semi-precious stones and paintings about the Passion of Christ dating back to the 1300’s. The upper part of the walls feature paintings about St Wenceslas life.
Before entering the Old Royal Palace (Stary Krālovsky Palác) we were entertained by changing of the guard in the court yard. Firstly trumpets sounded from the balcony, before the armed guard marched out from the palace. It was a rather grand performance with lots of stamping feet, crashing of rifle butts on the cobblestones, sharp looking pale blue uniforms, shining chromed rifles, and swishing sword salutes by the guard commanders. It was pretty hot by this stage of the day and we felt a bit sorry for the two platoons of soldiers who were left standing out in the sun whilst their commanders marched off in side the palace. After a while the two commanders were marching back out and after some more rifle drill they were marching off. Ron of course was in his element watching the drill.

After the ceremony was complete we went inside the palace only to discover this part was a big empty shell with a massive banquet hall. The tour took us to empty rooms where some nobles were thrown out the windows all those years ago. Luckily for them they landed in piles of manure under the windows and survived. Also housed in the palace was the Crown Jewels or a variation of them.
Basilica of St George (Bazilika sv. Jiti) was packed with bus tours and even getting through the front door took all sorts of blocking skills. Once inside we were carried along by the crush of people. It was a nice enough building but due to the crush of people we couldn’t wait to get out of it. 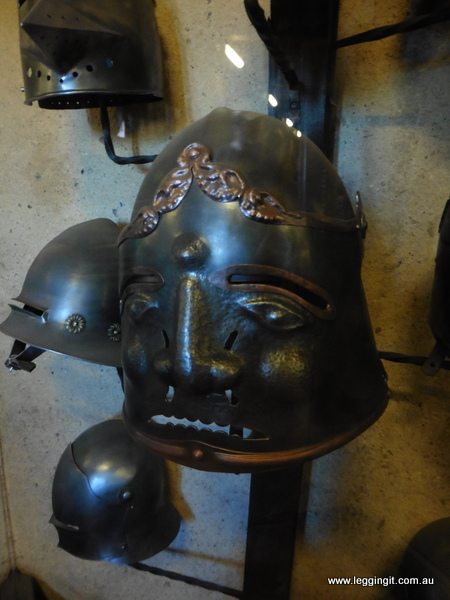 Golden Lane (Zlatá Ulìčka) was pretty interesting The Armoury building had one long upstairs hall containing a collection of all different style suits of armour and helmets. At the other end was a collection of weapons including interesting variations of axes and knives fitted with flintlock pistols. Probably useless to use in a fight but very interesting all the same. The other buildings contained all sorts of crafts and tourist gift shops. All very interesting to visit.

The castle grounds were beautiful with great views of Prague and walking around the outside walls we spotted a robotic lawnmower busily cutting the grass. Ron will have to invest in one for home. 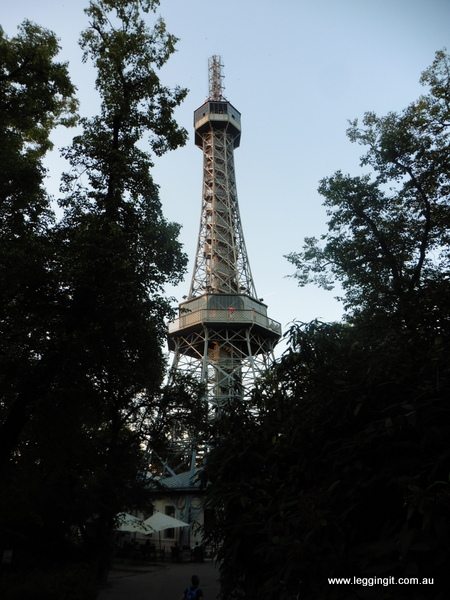 We were keen to check out Pragues version of the Eiffel Tower on Petrin Hill so caught the tram to the Funicular station. As the day was really sunny it seemed everyone wanted to visit the top of the hill and take some photos. The line stretched out about one hundred metres. A group consensus was let’s get back on the tram and find somewhere to eat. A place close to Wenceslas square had been suggested due to its authenticness by the tourist office. Well Gerry had the pork knee and I the pork neck wow how huge they were.
Wow how hot it was siting in the sun and we couldn’t find a spot to get out of it. Eventually the sun passed over the building and we soon cooled back down.

As the sun was getting lower we headed back to Petrin Hill and caught the funicular (using our all day pass for the tram). On top of Petrin Hill is a mini version of Paris’s Eiffel Tower. The Petrin Observation Tower was built in 1891 for the Jubilee Exhibition and is 60m tall. A bit like the tower in Lyon not overly tall however both sit on top of a hill so if you add the height of Petrin Hill, to the tower it’s 318m (1043 feet) high.
Gerry and Ron climbed the 299 steps to the top of the tower without stops and as the sun set had a magnificent view over Prague.
Just on dark we were treated to a fireworks display in the distance as we caught the funicular back down the hill. A few trams later we were back at Hotel Union and calling it a night. Tomorrow we visit the Alchemy Museum.