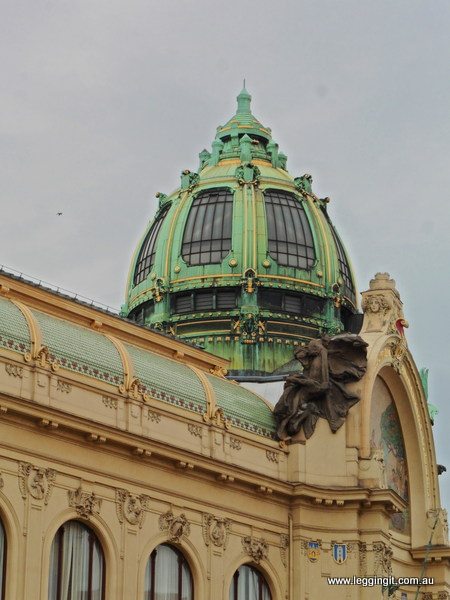 Our first morning in Prague started with a sumptuous breakfast at the hotel, which was a bit of a treat for us. A nice variety of sweet, savoury, hot and cold foods. After breakfast it was off to the old city centre for a walking tour and to spend the day meandering around Prague.

The transport system is really good with a tram running past the hotel and a whole network of trams, buses and trains that are really regular, and quite inexpensive. Tickets can be purchased from shops and the hotel with 30 minute tickets costing 24 Kč or all day 110 Kč but we discovered they never checked your tickets anyway.
The old town centre was packed with numerous tour groups and tour guides yelling in different languages in an attempt to be heard above the din. The day had turned out to be a scorcher so after yesterday’s rain on the road to Paris it was a welcome relief. Our tour guide was a real nutcase hailing from Manchester in the UK and was soon telling us little titbits about Czech history.

The town square is dominated by the statue to Jan Hus who was the first church reformer and gave birth to the Protestant movement. Jan Hus firstly spoke out against the failings of clergy, priests, bishops and the papacy which was tolerated by the Archbishop. However when he spoke out against corruption in the church especially indulgences (almost like a get out of hell free card where for an amount of money you could do what you wanted) he fell foul of the pope who ordered him excommunicated and tried for heresy. At the time there were even professional absolvers who for money would absolve you from your sins. The most ludicrous absolution was for 20,000 years, so hey are still covered today.

Jan of course was a man of his word and stood firm against the pope and the Roman Catholic Church. As he wouldn’t rescind he was burnt at the stake in Germany. His execution in 1415, started a rebellion of his followers (known as Hussites) against their Roman Catholic rulers. The pope declared five consecutive papal crusades between 1420 and 1431 in what became known as the Hussite Wars, and the Hussites were victorious each time. The effect was that a century later about 90% of Czechs were not Catholics and many were following the teachings of Jan Hus. He was also one of the inspirations for Martin Luther, one of the great protestant reformers. Hussite churches are still throughout the Czech Republic. 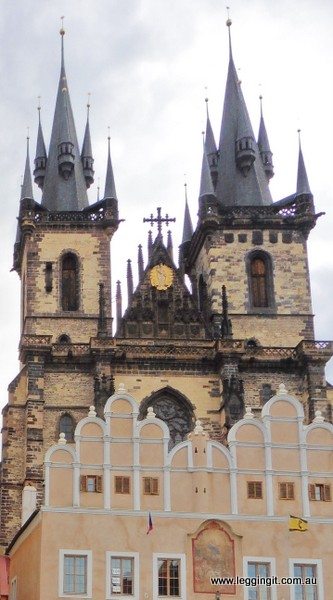 Overlooking the square is an unusual looking church, called the Church of Our Lady before Týn. It’s unusual as the two towers which should be mirror images of each other are actually different sizes. The locals call them Adam and Eve, but comedians say they’re a monument to Czech craftsmanship. The church was started in the 14th century and finished in the 1990’s. The style of the cathedral and towers however is quite unique compared to any we’ve seen before. With each spire surrounded by four smaller ones. 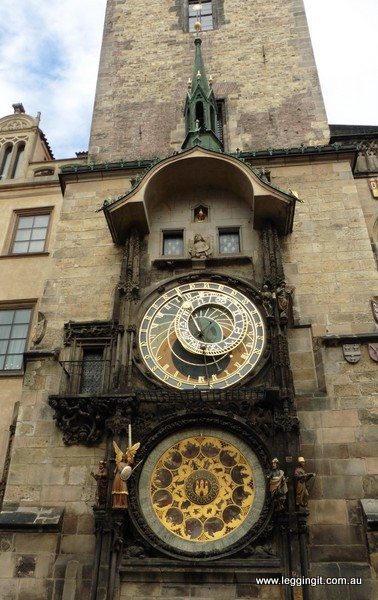 On the other side of the square is the town hall which houses Prague Orloj an astronomical clock. The clock was installed in 1410 and apart from being the third oldest in existence is the oldest still going. From the clock all sorts of information can be gathered. The clock shows the position of the sun, moon, zodiac constellations, all sorts of stuff which would be handy to farmers there’s also a dial below it showing name days. Thank god there’s actually a clock above it to show the time. 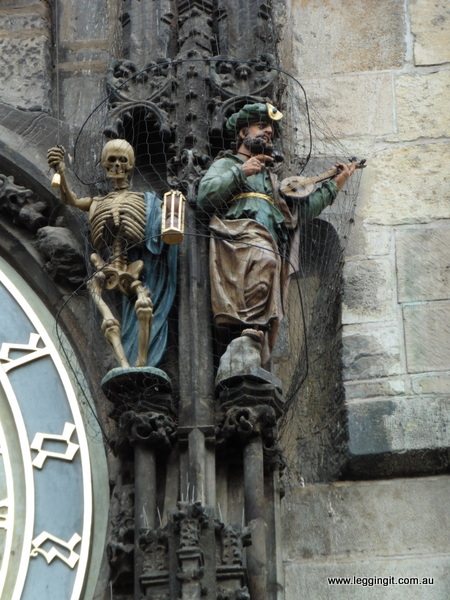 It’s got all the gadgets though a skeleton that rattles a chain, pilgrims that come out to warm everyone to repent and the highlight is the rooster which crows (although rather sickly).

The tour took us through the streets of Prague and it’s easy to see why people love this city. Along the way we learnt a little history of Prague and the Czech people. There were some names we’d heard of before such as Wenceslas (from the Christmas carol) and others we hadn’t. It was amazing how much history we’d never heard of before. It was most interesting learning some of the 20th century history, why the country became communist, the impact of communism and the rise of democracy.

The tour had all sorts of interesting stories and sights along the way. We finished close to the river so we traced our steps back to the town square to a little authentic restaurant nearby. 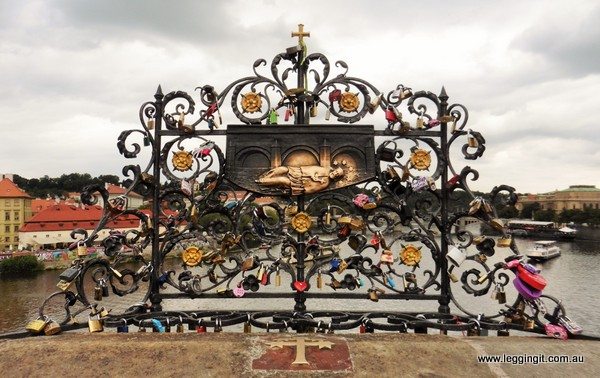 After lunch we headed to the Charles Bridge one of the main destinations of tourists. Everybody hangs out at the bridge where on either side artists, and artisans sell their wares. Michele and Deb lost us in the crowd in the market square. They lost us again just past the town hall before losing us again at the next corner. Eventually we met them at the Charles Bridge and had a laugh about which way we went. There was a great Dixieland band playing so we found a cafe and had a drink. As always we should have remembered place near tourist spots know how to charge, this lot had prices which were ok but by the time they added taxes and a service charge  it was almost 50% more than the menu. 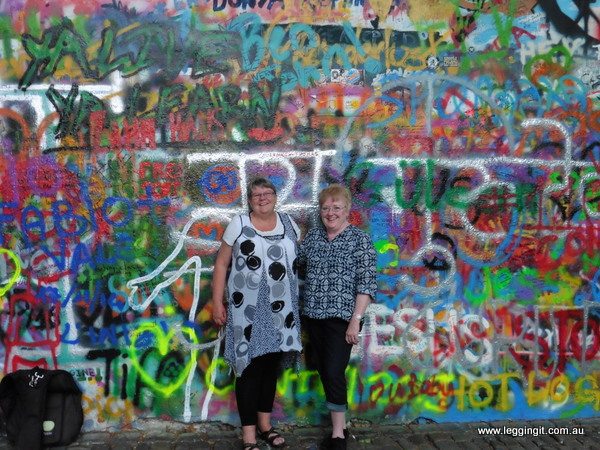 We then went in search of the John Lennon Wall, a wall dedicated to peace….sadly now it seems the graffiti has taken the message away but it was definitely colourful.

Later that night we headed up to Vyšehradské Hradby, a castle overlooking our hotel. There was a little bar up the top which on such a warm evening was the perfect place to grab a few drinks, some wurst and look out over the city.
Relaxed at the end of the day tomorrow we check out Prague Castle.