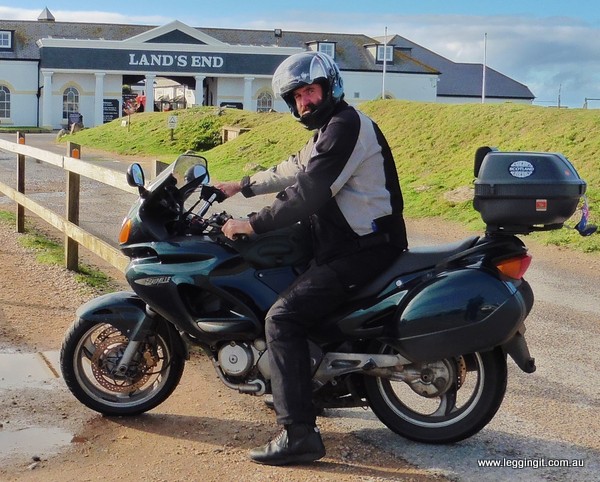 It was very foggy as we left the hostel and headed into Penzance on the way to Mount Saint Michael. After a cruise around the town and breakfast overlooking the beach we headed to Manzione finding a park near the causeway.

We wandered down onto the beach, past Cathedral rock and onto the cobblestone causeway. The causeway had been damaged in the big storms. Parts of it had been temporarily repaired with concrete and now the construction crew were out replacing cobblestones. The race was on because the tide would be in at 2.15 pm, it was 11.30 and there were still a lot of cobbles to put in.

Mount Saint Michael was a place of pilgrimage for it originally was established by Benedictine monks and named after the abbey in France. It has been the home of the St Albyn family since 1647 but they have handed it to the National Trust. The family have a 999 year lease so continue to reside there.

We walked up the many stairs and wandered through the buildings on top of the mount. A huge part is open to the public and they had lots of interesting bits a pieces.

We headed back across the causeway with half an hour to spare passing a group of young Americans who proclaimed they had half an hour to get back…it took me nearly that long to get to the top of the stairs lol so they may have to get the boat back.

The mizzle (cornish word meaning a mixture of mist and drizzle) had cleared by the time we finished lunch and with the sun shining we decided to take a trip to Lands End and officially finish our end to end journey. Riding down to Lands End we passed the usual “First and Last Pub” before arriving at a grand colosseum style building with Lands End painted in huge letters. Unlike John’o’Groats in Scotland it was like a fun fair with an End to Enders exhibition showing all the other people who’ve travelled the length of Britain, and various amusements for families including stone circles, mini village, 3D cinema and Cornish pirates. There was a Lifeboat from the lifeboat association and Helicopter from the Cornwall Search and Rescue on display raising awareness of the vital work they perform. There’s a massive hotel, with restaurant and cafe’s. We planned to get our photo at the sign post however we found it’d been removed and the only one left was run by a photographer who posted out the photo and no vehicles were allowed.

Offshore is the longboat islands and the famous lighthouse which is often seen on posters with waves crashing around its sides, it looked tiny. 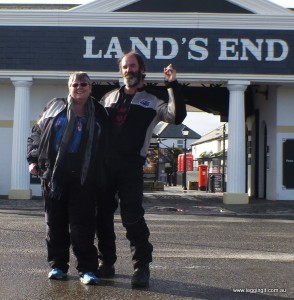 As the day was getting late we decided to visit the Levant Tin Mine, a National Trust Museum not far away. It was a pleasant ride through the countryside and the little villages with the occasional chimney stack poking out of the fields reminding us of Cornwall’s mining past. The Levant Tin Mine is situated on a cliff face at the edge of the Cornish coast. Many of the old buildings are just ruins with a number of stacks still reaching for the sky. There’s an old blower shed, a restored whim engine and boiler. The whim engine still runs but as we arrived close to closing time they’d just shut it down.

In the main display room are working models of the whim engine and man lift also the electric winch which was used when parts of Levant were mined by a neighbouring mine. The man lift was a fascinating invention. As the mine got deeper it became harder for men to climb the ladders to the surface at the end of their shifts so a man lift was installed. A simple invention where a wooden beam with platforms was attached to a winch which lifted the beam twelve feet, before lowering twelve feet and starting the cycle again. When the beam reached the top or bottom of the cycle they stepped off the platform onto the next level.

The most interesting part of the museum was the film room which told the story of Levant one of the richest mines in the country. It traced the history through the early days, through the heights in the 1800’s when it had a workforce of 320 men, 44women and 186 children. The film also told the tragic tale of the day in 1919 when the steel bracket at the top of the man lift broke and 31 men plummeted to their deaths and a further 19 were seriously injured. The mine never really recovered and faced with falling prices and the Great Depression wound up operations in the 1930’s.

Since the mine was passed to the National Trust in 1967 a long slow process has transformed the crumbled ruins into a mining museum with working equipment. It serves as a monument to the men,women and children who worked this pit and a real tribute to the men and women of the National Trust whose tireless dedication and volunteering continues today.

As the sun was setting we slowly cruised back to the hostel, through the little villages surrounding the mines which in their heyday would’ve been booming.

Tomorrow we head towards Plymouth for our housesit.