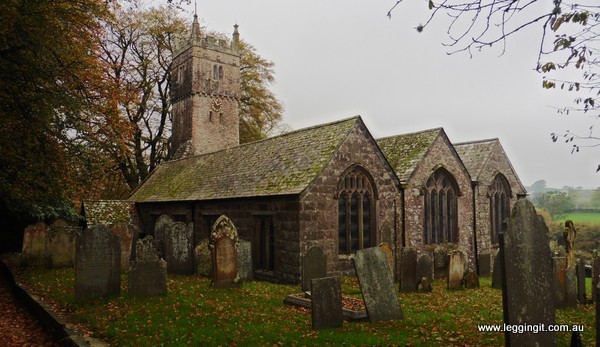 Our housesit is at Seaton and the house is set up on a hill overlooking the bay. With the stunning view and the sound of the waves crashing we were looking forward to spending a week exploring and relaxing.

Our first day at Seaton was a bit grey but we decided to check out the area. The beach was still teaming with people, the car parks were packed to the gills and so was the local pub the Smugglers Tavern.

The food was pretty good but every man and his dog were in the pub and by that it was every man had a dog and they were all wet from either the beach, the rain or both. Dunno why dogs are allowed inside places which serve food but with the dogs growling, snapping and wet dog smell it was like eating in a kennel.

The pub was packed with kids as it was also kid friendly with one kid screaming the pub down as he was told to stop playing a game and have lunch. The kid was right out of his tree, and it went on and on whilst meanwhile his mum got him a red cordial, jeez that would be the last thing he needed. So between the screaming kid, growling dogs, wet dog smell and the smell of shitty pants it wasn’t a pleasant meal. We were glad to leave the place.

For the next two days thick fog greeted us at Seaton from morning until about 4:30 when it lifted for about 1/2 an hour before returning even thicker.

The first day Ron spent in Liskeard trying to track down spares to service the bike, without success. Without Michele to guide him he found riding around in the thick fog pretty hard. Not only was visibility down to about 50 metres but the thick fog was playing havoc with the satnav and it kept losing signal so he spent a bit of time riding in circles but mad eit home eventually.

The second day Ron took a ride up to Looes to get some groceries. The fog was so thick he could only manage 25 kph all the way. On the way he said he passed through the small village of No Mans Land which due to the extra thick fog seemed aptly named.

On the third day we were greeted to a glorious sunny day so we headed to Cotehele, which has been the ancestral home to the Edgcumbe family for a few hundred years.

On the way we stopped off at a post office to post a parcel. We noticed a church nearby which looked pretty interesting so decided to check it out. It’s quite interesting the style of churches which seem to be uniquely Cornish. This one consisted of three halls alongside each other with carriage style roofs and built from grey slate.

The run from the church to Cotehele took us through some lovely little villages, down over an old stone bridge, past an old mill, a dock and up a steep hill to the house and farm buildings.

Cotehele is a Medieval/Tudor Mansion which dates from the 1300’s, set high upon a hill overlooking the River Tamar and is said to be the least altered house from that period. 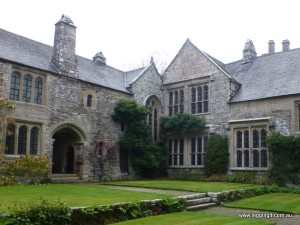 During the 19th century its quay was bustling with boats loading-unloading goods, paddle steamers plied the waters and small boats carried locally grown fruit and vegetables back down the river for sale at the Devonport Markets.

The Edgcumbe family acquired Mount Edgcumbe estate near Plymouth, in the 16th century so despite Cotehele’s size began using it as a holiday house. Like all holiday houses, as they updated the furniture at their other houses all of the older style furniture ended up at Cotehele, so it has a wonderful old feeling about it.

These days the barn has been converted to a restaurant and judging by the crowds the food must be pretty good. The estate has extensive gardens with orchards, forested areas and of course a mill. When we arrived there were people heading in all directions.

Entering the house is via a gated courtyard, which reflects a time when farms were fortified. We entered the great hall which has all sorts of swords, spears, shields, armour and animal trophies hanging from the walls. There’s a Zulu shield and spear on the wall. The guide tells of its relationship with the owners of the house and the 22-year-old Prince Imperial of France, Eugene Louis Jean Joseph Napoleon, who was killed by Zulus in the Anglo-Zulu War whilst he was with the British Army causing a huge diplomatic incident.

The house has beautiful old tapestries on nearly every wall which must’ve taken years to complete. They give the house a real warmth and homeliness. 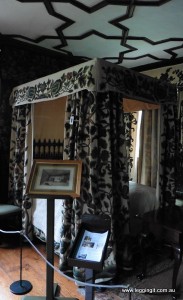 The family had a chapel as part of the building and as we entered we were treated to some wonderful music being played by a young boy. He certainly was talented and it’s good to see that some things are still being used.

The house is mainly two storey with a tower on the back, where as it’s not too far away from Halloween the national trust volunteers have been busy ” spookifying” the house. It’s also part of their effort to get the kids involved, with a list of things for kids to find. Some of the volunteers were even dressed up as witches.

The wooden floors, lattice windows, tapestries and oak furniture really add to the age of the building. On the ground floor are the old kitchens which are not as grand as would be expected in this size building, but as it wasn’t used on a permanent basis it’s understandable that it wasn’t upgraded. Also on the wall are instructions to staff displayed on the wall including penalties in the form of docking of pay for infringements.

In the library a display of World War 1 has bits and pieces donated by locals. It also contains the story of the Shamrock, a Tamar Sailing Barge built in 1899. The Shamrock, named after the unsuccessful Irish challenger to 10th Americas cup, was used during the war to ferry explosives between freighters and the ammunition factories. These days it is tied up at the quay and is open to visitors. 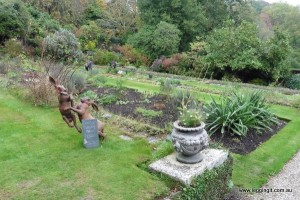 After a look through the art gallery housed in one of the wings of the house we headed to the quay. The quay area was teaming with families, either at the kiosk or the restaurant which are housed in the old quayside buildings or in the kids only section in the boathouse where the National Trust had kids Halloween activities. 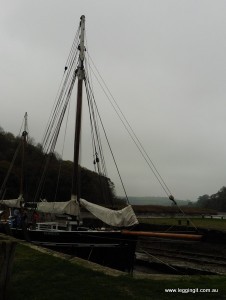 We took a break at the restaurant to conduct an experiment. We both grew up enjoying Devonshire teas, a pot of tea accompanied by scones with jam and cream. Upon arriving in Devon we found that they were called simply Cream Tea and across the border in Cornwall they were also called Cream Tea. They both have the same ingredients, scones, jam and clotted cream, however, there is a big difference. In Cornwall, the jam is applied first with the cream on top. Meanwhile over the border in Devon, the cream is applied first with the jam on top. We set up our scones in both Cornish and Devon styles, then put our taste buds to the test. We were amazed at the difference and the winner is Cornwall. 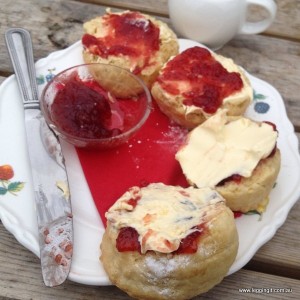 After a nice day the fog started to roll back in so we headed for Seton along the River Tamar along all the little back roads to get a feel of the countryside.

Fingers crossed for a nice sunny day again tomorrow when we head into Devonport.