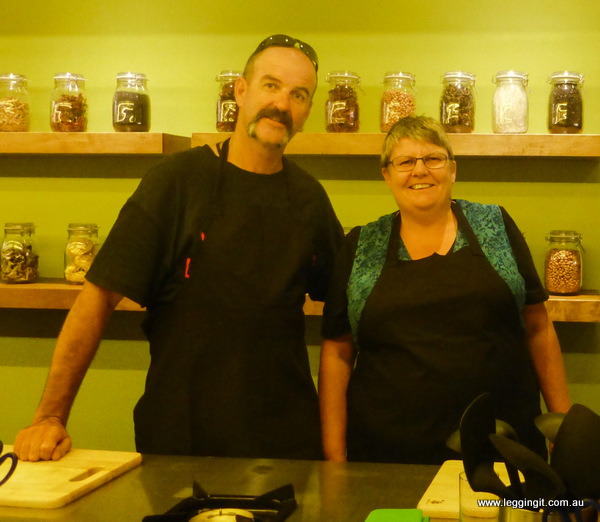 After a few days of kicking back and relaxing we decided to book a cooking class yesterday afternoon at Le Table Khmeré to learn a little Khmere cooking.

When we arrived we were warmly greeted and welcomed in, by the owner.

We were soon joined by the other participants of the course a pair of young Germans, one of whom was acting as an interpreter and a set of their parents. So five cooking and one photographing and interpreting.

The kitchen was ultra modern with large bench tops and all the pots, and dishes stowed under bench, which made everything accessible when we needed to use it but not cluttering the bench.

We  had a Khmer chef and her assistant who interpreted and helped us getting it right. The first course was Fresh Spring rolls, which we found unusual as the top was rolled back leaving the lettuce, carrots etc protruding. Usually the spring rolls we’ve eaten before have both ends rolled up encasing all the ingredients. The open end gives the spring rolls a nice look, with the soft frilled edges of the lettuce, with long thin straws of carrot, the bean sprouts, long beans and cucumber. The simple dipping sauce of coconut milk, chilli, peanuts, sugar, fish sauce, lime juice and carrot really set the Spring Rolls off with a sweet but sour zesty flavour.
Our second course had us bashing the mortar and pestle as we made the sauce for Amok (a traditional Khmer dish). Firstly we finely chopped lemon grass, then we combined Kaffir Lime leaf, chilli, palm sugar, dried sweet chilli, galangal, turmeric,garlic, shallot and added them all together in the mortar and beat the snot out of the lot with a pestle until it was a fine consistent mixture. We added an egg yolk, our meat, gave it a mix and poured it into banana leaf cups which our chef showed us how to make. We decorated it with chillies and put it in the steamer and proceeded to make our dessert.A traditional sago dessert which was quite easy and colourful.  We boiled some pearled sago, some pink and clear waved strand sago until it was cooked and the water had been fairly absorbed. To this we added a little sugar and salt and banana. When cooked we spooned this into serving dishes.

We were really impressed with our results and enjoyed eating them at the end. Our Amoks tasted  quite different as we’d cooked for our own tastes. Michele’s fish was a subtle curry with great flavours, where my chicken was extra spicy, and lots of crunch from the peanuts, displaying our different tastes.

Here are the details of the class we took, we really enjoyed it and though it was good value. You can also see the food we cooked,  we were so engrossed in the class we forgot to take photos.

A ride home through the traffic via our newly discovered shortcut down a laneway we were home in no time and enjoyed a swim to end the day.