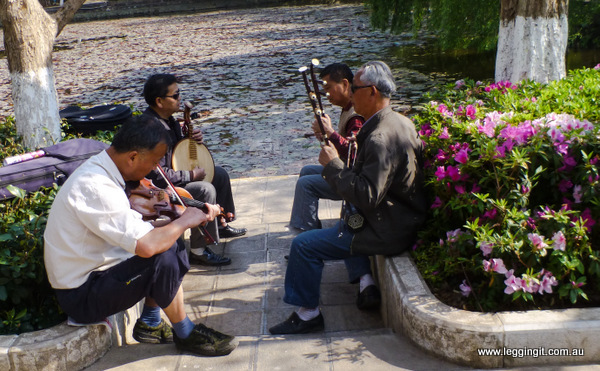 The alarm went off at 6.30 am so we sprung out of bed, showered, packed our backpacks and were ready before 7am, which was a little early so had a cuppa to kill half an hour.

The reception desk was in darkness, the front door locked and we were wondering who to call so that we could check out, there were some muffled noises from the room behind the desk and a lady wandered out, mumbling and wiping sleep out her eyes. She talked the whole time in Chinese, maybe cursing us for waking her from a wonderful dream of winning a fortune at Mahjong, but I handed her the receipt and the key and she returned our ¥100 key deposit.

The street was almost empty when we stepped out to find a taxi to get to the train station for our trip from Jianshui to Kunming.  Last night there were heaps of taxis parked outside the hostel, but now there were none to be seen. About ten minutes later one appeared and we hailed it, wiping a bead of sweat of our foreheads. The taxi driver only spoke Chinese, but we’d prepared for this situation and whipped out the Routard (a book with pictures) especially developed to breach the language barrier. We flicked through to the transport section and pointed to the train. He looked at it blankly and probably thought to himself what the…….? He started driving but he wasn’t filling us with confidence. Meanwhile Michele was feverishly trying to get a signal on the iPhone so she could show him the address. We’d gone about three or four blocks before the satellite beamed downed the info we needed. We stopped the driver, he looked at the iPhone, a light of recognition went on, he replied Ahh 30 yuan, and we replied “yes that one” in unison. He planted the foot and soon we were weaving in and out of traffic as if involved in a high speed chase.

About ten km’s out of town in a newly established area is the new train station. When we arrived the station wasn’t open, as it didn’t open until 8 o’clock and not a second before. I’m thinking that we should change our names to Brad and Angelina because wherever we go everyone stares at us and the train station was no exception. At Zero Eight Hundred hours and one second the key turned in the lock and the doors to the ticket office opened. The ticket staff on booth 1 slowly rolled up his blind and clipped a paper clip to it to hold it up (yep brand new station). I wrote Kumning on a slip of paper and passed it to the ticket clerk and held up two fingers. The screen read ¥87 for both about $15.69.

We still had about 40 minutes to kill and as there was no cafe’s inside the station we walked down into the small hill to the dirt car park where four hawker stalls were set up. We were looking for breakfast and some snacks for the trip. We purchased some apples,a nashi and peanuts while the lady was chattering away in Chinese I suppose pleased to be catering to such huge Hollywood stars. She whipped the lid off a 20 litre drink eski revealing rice in a watery looking light brown gravy. I agreed to a big bowl and she ladled a heap in before dumping a heap of sugar into it. I thought it was salt and was thinking to myself this is gonna be a bit salty for gravy. The rice was in an apple sauce and compared to some of the things I’ve eaten in the past it wasn’t too bad. The lady unfolded a canvas stool, about the size of a small milk carton, which I just looked at and said “there is no way I’ll be able to get down” but she was insistent. By this stage the ladies at the other stalls were all gathering around to look at Brad Pitt eating Rice Porridge. Meanwhile Michele was getting impatient and told me to get a wriggle on, so I went into hyperdrive, teaspoon a blur dipping in and out of the bowl as I wolfed down the rice like I hadn’t eaten for six months. The women were pretty impressed, all smiling to each other and excitedly chatting away. I reckon they were all saying to each other ” jeez he loves that rice porridge. Look at him putting it away”. It was probably high on the conversation topics for the next six months.

The station had a huge security presence with about ten police and station security manning one door. Outside police were roaming the grounds with assault rifles and as we entered the main hall the police demanded our tickets, passports and to scan our luggage. We placed our luggage of the conveyor and walked through the metal detector. I of course set it off, and a nice young Chinese lady gave me a nice long body search but didn’t find the torch I’d forgotten to remove from my pocket, or maybe she did and wasn’t letting on. The police were pointing to my backpack, uh oh. I picked it up and put it on the search table and they asked me “do you have a knife in your backpack” to which I replied “yep, a fruit knife”. Then they asked me if it was ok if they confiscated it. After the massacre last week in Kunming, I can understand the police were a little jumpy but it was a bit of a joke to take a fruit knife.

When the train was due the passengers rose as one and ran to get to the gate first. Once again our tickets were checked and as we entered the platform there were station security guards with loud hailers directing everyone to line up in their carriages . All along the platform were other security staff with loud hailers ensuring the lines were kept straight and people weren’t milling about. There were about 8 lines for each carriage. The train arrived and we discovered they’d locked the train doors so that everyone in carriage 5 and 6 entered and exited via one door and people began to push in as the security tried to keep order with their loud hailers. We found our seats which were facing each other in a group of four with an old lady and her husband but it turned out his actual seat was across the aisle in a group of six so he moved.

The train travelled through countryside with hundreds of plastic covered greenhouses and fields of vegetables. As we drew closer to some of he towns there were big manufacturing warehouses and we passed a smelter with huge stockpile of what looked like iron ore. Two teenage girls nearby broke out a pair of plastic hair dying gloves and pulled out a big plastic bag of chicken feet in a thick sauce and started devouring them, spitting the bones into the bin. One girl was playing on her phone with a chicken feet in her other hand. It was hilarious.

We played cards on the table and when we stopped for a snack the old lady beside us, started handing us sweet buns. We tried to politely refuse but she insisted so we ate one, and then she brought out chocolate and peanut brittle. It was a really nice gesture, and quite delicious. She even offered me some of her apple she happily carved up with her knife (and if you could’ve seen the look on my face as she pulled it out, old people are so devious) The two oldies departed a few stops further along waving goodbye.

There was a huge police crack down at Kunming station after last weeks massacre. Some people were killed in the ticket area and some on the forecourt and whilst we were in these areas we were extra cautious. The station was barricaded off and there were police cars, motorbikes, armoured riot vehicles, armed police everywhere and even about thirty riot squat guys all kitted up being briefed.

It was impossible to catch a taxi around the station so we walked a few blocks. Nicky took us to a nice restaurant and ordered some local dishes including soup, ginger pork, dumplings, morning glory and garlic sauce, crumbed beef with a mayonnaise style dipping sauce, and rice. There was too much for the three of us but it was probably the best Chinese meal we’ve had. Nicky escorted us to our guesthouse where we thanked him for all his help, and said goodbye.

On arrival we discovered we’d arrived a day early and they had no rooms just dorms. The 6 bed dorm had only one person so we stowed our gear and walked down to the Green Lake which was nearby. The gardens around the lake was filled with people wearing all sorts of traditional costumes belonging to different minority groups. There were groups everywhere playing music singing and dancing. We wandered around the lake until it was quite late and returned to the guesthouse for a nap. We were woken from our slumber when our roommate Dave arrived home from work. He’s currently teaching English at a nearby kindergarten. We chatted for close to an hour when the other lads from the hostel showed up. Shani from Canada who’s studying business and Ben from Germany who’s studying Mandarin. They were really nice blokes. They all headed off and we went for a drink nearby. We were pretty full from lunch and still tired so we called it a day as we were walking home from the Hikers Bar we passed a shop where a guy was teaching a young girl saxophone. A raspy warm jazz melody floated across the air and it sounded really good but at 10 o’clock we wondered what the neighbours thought!

2 thoughts on “Jianshui to Kunming”