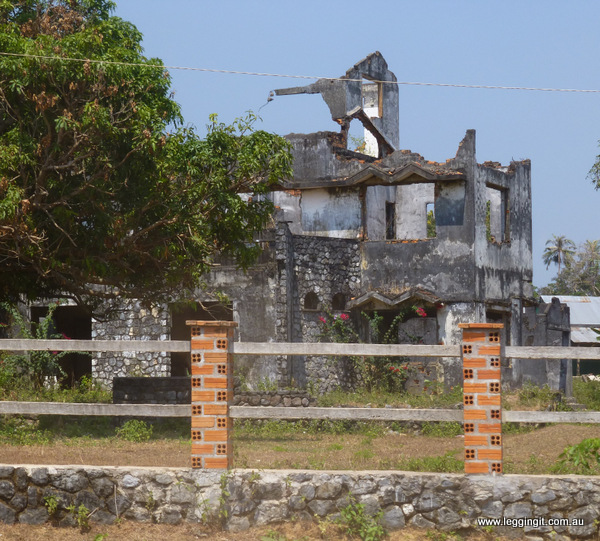 I may sound like a cracked record when I say, there’s nothing better than starting the day with a full cooked breakfast looking over palm fringed white sandy beaches, well….. apart from Legge Mc Muffins cooked on a barby at Rocko beach there isn’t. Once again Pasta and Basta in Kep was the location we chose to have the most important meal of the day. Le Dejuener Petite, er excuse my French. Michele wasn’t feeling too glamorous so opted for Lé Continental, with breads, baguettes, coffee, juice and I of course the flagship of the breakfast menu, L’Americaine. Breakfast set us back $15, which is probably a bit expensive but it was a huge meal. We met up with two ladies currently living in Phnom Penh who are involved with fostering rescue dogs.

Animal welfare is a huge problem throughout Cambodia. People just don’t have the money to spare for vets so injured animals just survive or die and animals just aren’t neutered. If our old mate Harry Cooke was alive, armed with his trusty razor blade, he would’ve been busier than a one armed paper hanger with a case of crabs “removing the back wheels of all the dogs and cats”. It may sound a bit crude but it’d control the stray animal explosion which is going on everywhere in Cambodia. The stray dogs survive by ripping apart all the piles of garbage, scavenging for food, which people just dump everywhere. Wherever we’ve been we’ve seen heaps of dogs with skin conditions, broken and deformed legs its heartbreaking and we’ve heard there’s some even with rabies. We’ve been told eight people a year die from rabies in Cambodia. We had our shots before we left, and know the precautions to take but its still a worry. Like other Asian countries when things get out of control and it comes to a head they just shoot the stray animals, but it shouldn’t get to this stage with neutering, and finding animals homes. In Phnom Penh a lady started rescuing dogs and finding them homes, which these ladies are involved with. Some of the dogs even found homes abroad. As I’m writing this I’m looking at a mangy bitch, bald as a baby’s bum from her front shoulders back trying to scratch on the grass and sand an itch that just won’t go, the poor bloody thing. Then she was off scavenging through rubbish and you just know she’ll be in pup soon breeding more mangy unloved dogs.

It was a sad day for me today, as my old grey thongs ( flip flops or Japanese Safety Boots for those who don’t understand Strayan), finally cashed in their chips. They’ve been with me through many overseas trips, mining jobs, and projects around home with different coloured paint and concrete marking the passage of time. They’ve been my good “going out thongs”, my “barbecue breakfast thongs”, my “anti piss paddling thongs” but last night I knew they’d stomped their last cockroach and swatted their last fly when I discovered a terminal tear in one of the plug holes. We visited the markets trying to find a replacement, with happy smiling ladies holding up thongs which looked like 1/32 scaled down versions beside my paint splattered beauties. Eventually we conceded and went down to the tourist area where we found the last set fairly close to my size, but in black and yellow making me look like a Flouro Tourist, just fit me out with a flowery shirt, some fisherman’s pants, a pair of bright yellow sunnies and I’m ready to go. It may take me some time to get used to these Flouro Flops.

Imagine a place high above the ratrace perched in amongst the forrest, overlooking beaches far below. With pictures of the most famous rock gods looking down on you, Hendrix, Santana, Plant, Page, Gallagher, Blackmore,Wood, Winter, Saville, Richards, Gilmore and many more representing bands like Jefferson Airplane, Stones, Faces, Deep Purple, Sabbath, Pink Floyd, Stone Mountain, T-Rex, Led Zeppelin………That’s right, we took a trip up the hill this morning to the Led Zep Bar(air guitar solo) which is situated high up on the hills bordering the National Park. Theres a rickety wooden bridge leading from the trail across to the verandah, of a thatched Hut, which is the Zep. It takes a bit of concentration to make sure you don’t step on the dodgy looking parts of the bridge and don’t end up being the one saying “i thought it was ok to walk on”. We sat feet up on the verandah rail looking over the town far below enjoying the views. We chatted with a few different people who were heading further up the hill to the temple and the nunnery. Strangely enough someone further down the hill was playing a Mister Mister album. As the tunes floated across the hillside, it reminding me of a conversation early last week on how influential this album had been. It was so nice just chilling, before we knew it 2 1/2 hours had passed.

We headed back to the Guesthouse passing groups of ladies sifting the white sand on the newly installed beach, bulldozer spreading the sand and long trucks with guys shovelling all the sand out. It might not be the best job but everyones getting paid, and thats the main thing. We picked up the camera from the room, and were just taking off when Fabian decided enough was enough and promptly broke his clutch cable. We parked up and informed Gaston about the situation and the pair of us started wheeling the broken bike to the bike shop about fifty metres away. I’m not sure if Gaston’s technically minded or not, but I was getting worried when he started the bike and was operating the throttle with his left hand while reaching down trying to operate the clutch lever on the gearbox with his right hand, whilst dropping it into gear. He got it into gear but almost dropped it twice, when he stalled it. I kept a safe distance because it looked like he hadn’t thought it through very well and it was guaranteed to turn out bad. I was expecting to be washing French skin and blood off a dented motorbike panels any moment. Luckily for him he gave up and continued to push it. The local shop charged $5 parts and labour and had the bike ready in about 5 minutes. If only they could do that in Australia.

With Fabian fixed and back on the road, we thought we’d check out the Ghost Houses of Kep so went for a cruise around looking at the old abandoned houses. Prior to the Khmer Rouge takeover, Kep was the beachside retreat for lots of wealthy French from the 1900’s and later on by cashed up Cambodians in the 60’s. The Khmer Rouge lobbed up in the late 70’s evacuated the place, put everyone to work on farms or killed them. The villas were systematically looted until all that’s left today are lots of blackened shells, some that’ve been taken over by ghosts, some by squatters, some by both. It’d be great to buy a property and do it up but supposedly all have been bought during the property boom of the 90’s by rich investors waiting for the boom to take off. There’s lots of two and three storey houses,which would’ve been grand in their day, surrounded by elaborate fences and gates. These houses are so different from the abandoned mansions in Georgetown , not only because of different architecture but the abandoned mansions in Georgetown fell into disrepair because of lack of finance these due to war.

Some of the villas have been repaired or are under renovation, but most are waiting for the time when Kep will be a boom town again and we think that time is not too far away. Hopefully our friendly Tuk Tuk driver Buntaoun, who waves every time we pass him on the bike is amongst the people benefitting in the boom times. It’s blokes like him that make this place great. He’s a top bloke and cheaper than the other tuk tuks so if you go to Kep call Buntaoun 0121718040. We’re sure he will look after you.

We lunched at the Sailing Club, which is a great setting. A beautiful timber building, set amongst breadfruit trees with a verandah and jetty overlooking the sea. I decided to have the three course menu of Shitake Spring Rolls with an intriguing chilli dipping sauce, sweet and sour prawns with jasmine rice, chocolate drizzled bread and butter pudding with coconut Icecream and peanuts. All up with a double espresso and fruit shake it cost $19 but it was enough for the two of us. However it was a shame that Michele still wasn’t feeling so good that she couldn’t really enjoy it as much as I did. As we were leaving they were lining the jetty with candle lights in preparation for tonight which will look spectacular. We made it back to the guesthouse to enjoy another blackout which we’re told is quite normal, due to electricity being supplied by Vietnam. We had one last night just before midnight which woke me up in a pool of sweat, and today’s lasted for most of the afternoon coming back on about 5ish almost to the minute that Gaston had predicted.

We watched another spectacular sunset over the Gulf of Thailand down at the Crab Markets and headed for home and were surprised by a large group of Macaques down near the beach. It was great to see locals also stopped watching the Macaques some with babies as they monkeyed about. We decided to skip tea as Michele still wasn’t 100 percent and I was still pretty full from the late lunch. I popped into a little Asian grocer for some drinks and was pleased to find jars of vegemite on the shelves, and at a reasonable price of $4.30. How good is that?
During the day we discussed the price of meals and there were a couple conclusions we came to. Location governs price; eat at flash places you’ll pay flash prices, eat with the locals you’ll pay local prices. Meal sizes; a lot of the bigger meals are enough for two people. It may be more sensible to order one meal and if we’re still hungry order more. Hmmm Food for thought 😉

Tomorrow we’re off to Vietnam. A country full of food nuts. When they are not eating they are talking about eating. Gotta love that.