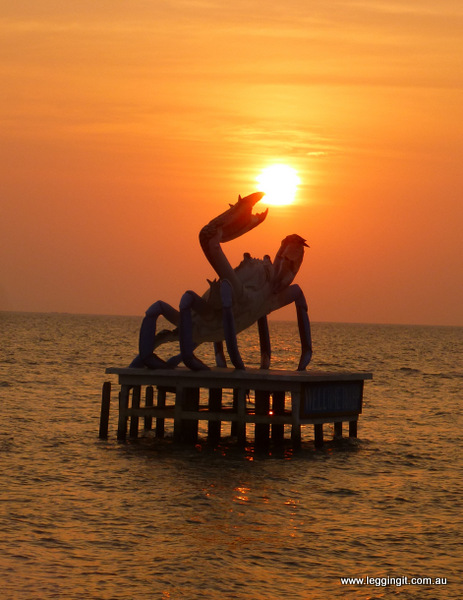 Enjoying a huge American breakfast overlooking a Palm fringed white sandy beach is definitely the best way to start the day. The setting at Pasta Basta was pretty nice and relaxed, there we met some fellow travellers from Essex called Ed and Angie. They were escaping the English winter and what better place to be relaxing but here in Kep. We told them a bit about our adventures and they told us about theirs, it was really nice. When we get to the UK we’ll definitely catch up again and have a few more laughs. It was funny looking out at the car park seeing a little Honda Civic with the back chopped, some bucket seats installed an a roof of a Tuk Tuk covering the whole lot. I’ve named it the “Popemobile”.

We decided we’d explore Ch’nork Caves near Kep so mounted Fabian for the trip. The road between Kep and Kampot is a little bumpy but in fair condition. We missed the turn and ended up on the roadworks before retracing our route. The moment we turned off the main road we hit the dirt and we had to drive slowly to avoid the potholes. The map was pretty sketchy as to the location of the cave but we came across a sign which read Kbal Romeas Prehistoric Site, but it wasn’t where we were looking for and didn’t quite look right so continued on for a short distance before asking a local drink seller who pointed back towards the site we’d passed.

We returned to the site and were met by a local boy who after charging us $1 each led us into the cave. At the entrance of the cave were some Buddha paintings on the walls and two shrines. The cave opened up into a large open main cavern and the boy told us how the cave had a temple which had been ransacked by the Khmer Rouge for its gold and now all that was left was a small pile of bricks. The trail through the cave was pretty rough with some wooden planks and dodgy slippery areas to walk over. One of the boys had Michele’s arm the whole way and was behind her helping climb steep areas, not that he would have been able to do anything had she fallen.  Finally he and his partner told us we had to squeeze into a 1 metre gap to climb back out, I wasn’t having any of that. Personally I’m not worried about climbing through the small spaces, just don’t think these guys have the know how if things were to go wrong. So we retraced our steps, passing one of the climbing guides for Climbodia who abseil around the cliff faces and climb through some of the chimneys in the limestone formation. We gave our two guides a further $2 each although they wanted $5 each for guiding us, torch rental, and looking after the bike.
We continued further up the road through beautiful paddy fields, passing smiling people and waving kids. It was a nice ride apart from the rough dusty roads. We passed a kid who pointed towards one direction saying a name we couldn’t quite make out but though it must be the other caves so we headed in that direction. We passed a German girl, Sarah, on a scooter who in true German style had entered the GPS coordinates so we decided to do a u-turn and follow her. Many bumps later and a few GPS fixes and we were being escorted by smiling kids eager to earn some cash guiding us to Ch’nork Caves and temple. But first we had to navigate over a large irrigation ditch. I wanted to ride the bike over a pair of logs loosely tied together but Michele was in favour of following Sarah over the concrete bridge further up the canal. Boooooo party pooper.

We rode around up to the temple where all the staff were keen to put the bite on for a little bit of Cyril Ash. The parking girl with her sparkly gold tooth issued us a ticket and guided us to the ticket counter where they lined up for an entry fee of $1 each. We tried to get rid of a kid who was following us and pointing out the features of the cave, we told him we didn’t want a guide, but obviously WE didn’t get the message. We hurried past the wooden temples and shrines at the bottom of he hill as our guide chased us up the steps, ensuring his paying customers didn’t escape without parting with a bit of hard earned, his way.

We climbed up the 100 plus steps and there was a really nice view looking out over the rice paddies towards the hills in the distance. We continued up over the lip and into the cave where our guide pointed out an elephant shaped formation, then an eagle, turtle, cow. Inside the main cavern was a temple supposedly dating back over a thousand years built around a stalactite representing the god Shiva. There were other formations hanging from the roof. Our guide then told us to squeeze through a hole into a darkened space which was the way back to the exit, Sarah turned on her phones torch, had a look inside and promptly said no, we both had a look and agreed. We returned the way we came, sat and chatted whilst enjoying a drink.

The staff circled like a school of sharks ready to go into a feeding frenzy as soon as we opened our wallets. The longer we sat the more they became incensed, so we sat and enjoyed finding out about Sarah. Sarah was a pretty street smart traveller judging by the way she asked directions off different people, then double checked with the next person. We followed her back out over the bumpy dirt roads. onto the number 3 main road to Kampot before saying our goodbyes.The No. 3 Road was in good condition all the way into Kampot and Fabian was rattling along happily on the speed limit, which is probably his limit as well.
We arrived in Kampot and Michele could hardly stand after the slow ride over the bumpy roads. We decided to have lunch at Veronica’s Cafe and it was an excellent choice. Normally when huge is written on a menu you instantly think “Yeah right” however, the Huge Salad was huge enough for two people. I enjoyed a local beef curry that really hit the spot, it was so flavoursome. After a fairly bumpy ride home Michele gingerly peeled her butt off Fabian’s seat and slowly made her way up the stairs to the bed where she collapsed.

Late in the afternoon we took a run down to the beach which Lonely Planet describes as a rocky pebble beach. Obviously someone has read Lonely Planet and they’ve been trucking in white sand from Shinnoukeville no stop, dumping it on the side of the road, then spreading it out with a little bulldozer to transform it, a sort of a “what do you know Lonely Planet”. They even have ladies sifting it to ensure it’s quality.

We parked Fabian up off the sand, put our gear on the sand and hit the water. It wasn’t quite cold but it was beautiful to be swimming in the sea again. We really enjoyed it, swimming in the Sea of Thailand.

After a shower we took a few shots of the sunset near Crusty the Kep Crab, and near the other statues. The haze around here makes sunsets bright orange and it’s magnificent to watch.

We wandered back to our Crab Restaurant overlooking the sea and dined on barbecue crab and Ginger Chicken with each meal costing $5. Michele felt like a killer as she ate her crabs, for not only were they undersized but the females were full of roe. I hope that with some education some of the fishing practices can change before there’s a collapse in the stocks.
We finished off with some LyLy Belgian Ice cream which at $2.50 each almost gave me heart palpitations, but it was very nice.

Tomorrow Michele has vowed not to leave Kep so who knows what we’ll do.