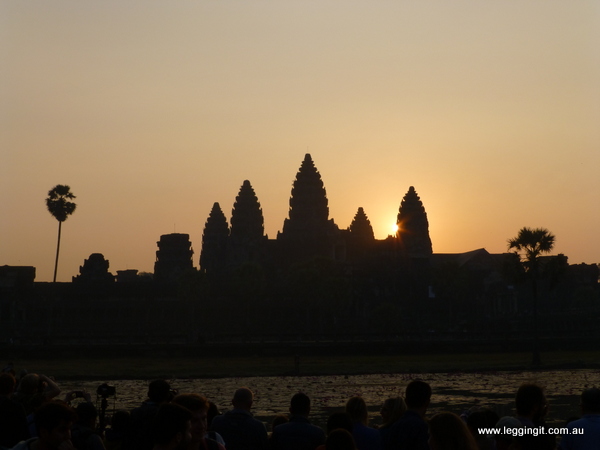 How did we celebrate the milestone of my 50th year on the planet? I shaved my head, and watched the sun rise over Angkor Wat.

We left the hotel at 0530 and travelled by Tuk Tuk out to the ticket office. Tickets have your photo on them for security and three days cost USD $80 and for the two of us that’s a great idea so we can explore as many temples as possible without getting “templed out”.

There is a mad rush for Angkor Wat before sunrise (almost like a cavalry charge) with Buses, Cars, Tuk Tuk’s, joggers, backpackers in Cambodian Elephant pants riding bicycles and those not willing to spend any money walking.

Meanwhile we’re putt putt putting along the road in our Tuk Tuk with our rider Lucky. Dunno how he got his name but every time he backs off the throttle the light dims, the engine almost conks out, and I’m thinking “lucky to get there” then miraculously he finds a gear and the engine splutters back to life and we dodge a pot hole and I’m thinking “lucky we didn’t hit that”

We arrived at Angkor Wat in plenty of time, and found a nice spot on the causeway to watch the sunrise over the temple. At sunrise we took some photos with the reflection of the temple on the water then went inside. We wandered through the main temple looking at the beautiful architecture and carved stone friezes on the wall. There are some really intricate panels remaining some showing ancient indian tales from when the temple was Hindu and others of mighty rulers and their wars. Remarkably inside the temple wasn’t too crowded and when we’d finished wandering around inside we went outside and found a crowd of over one thousand people stood around a large pond all still waiting for the postcard photo of the sun over the main temple. Out in the car park we were surprised to find a little van with a coffee machine selling coffee at $2 a cup, we instantly grabbed a cup each and headed off to find our driver Lucky who then took us to a nearby stall for breakfast.

The restaurant stalls are well set up with wooden furniture and high backed chairs and clean western toilets nearby this of course meant average food and high prices.

After breakfast we visited Bayan Temple and were amazed with the many faces of the all seeing Angkor King (disguised a Buddha). We met a friendly Tourist Policeman who was a real character who took us to a few spots to get the funny photos and we had a real laugh with him. I cracked up when he said “you like my badge, want to buy one”and pulled one from his pocket. We declined the offer and went on our way.

Our next temple was a pyramid shape with steep steps so Michele opted out on this one. It was interesting hearing a comment by a young American girl that once you’d seen the other temple first the rest of them are boring, well her opinion maybe. I climbed to the top of the temple and had a great view of the surrounding jungle. The back of the temple had subsided hundreds of years ago and they rebuilt it including a partially built reclining Buddha .

We walked back towards the restaurant area through the walled city then passed through the gates and walked along the walls and wondered about the people who hundreds of years ago built this fantastic city.

Our driver was well rested, fed and ready to go when we returned so we headed back to the city to meet our couchsurfing friends Karin and Aaron for lunch. We met them near Pub Street and they took us to a little cafe not far from their hotel where we had lunch of fresh spring rolls, and some local Cambodian dishes all for $15US including drink for the four of us.

We headed back to the hotel on a “Two Dollar Tuk Tuk” (everywhere in the city is $2) and relaxed in the pool for the rest of the afternoon. We headed back out to Pub Street that night to catch up again with Karen and Aaron. While we were waiting to meet up a Tuk Tuk with a flat screen stopped and soon a crowd of Tuk Tuk drivers and the local policeman were gathered to watch Muay Thai between a Cambodian and a Thai. I wandered over and watched a bit of the fight cheering on the local fighter.

Pub Street is a tourist street with pubs and restaurants overflowing with tourists and doof doof music blaring out of speakers. We wandered around for a while looking for something a little quieter before Aaron showed us a little place at the back of pub street where there’s a little alley lined with restaurants. This area was very quiet and the meal prices were quite reasonable.

I ordered Fresh spring rolls and Khmer Curry beef and Michele Beef Skewers in Khmer Sauce. The Spring Rolls were really nice and the curry was nice but as I’ve found with Khmer cooking it was missing the spiciness of Thai. The service was really good until they forgot to order Michele’s dinner and it took an extra 30 minutes after everyone had finished to arrive and then was pretty average.

Soon it was quite late and we parted company but before we left for the hotel Michele found a fish tank to dip her feet in, with her feet all nice and clean ee caught a $2 Tuk Tuk home and as the clock was striking midnight it was time for bed.