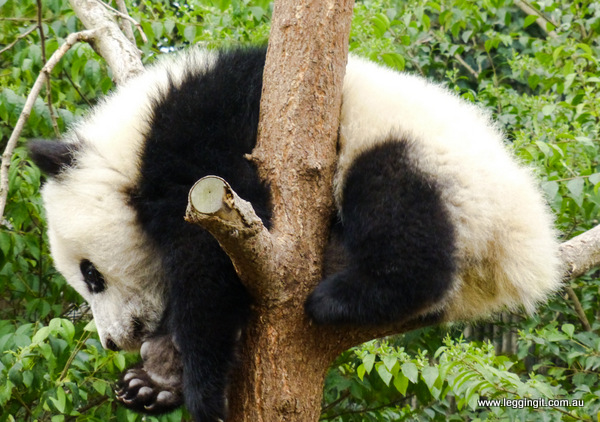 Up early this morning in readiness for a trip out to the northern suburbs of Chengdu to The Chengdu Research Base of Giant Pandas. The park covers a 100 hectare block of rolling hills running down to a lake. As we’d booked the Sichuan Opera last night through the hostel we received a 20 percent discount off both tickets. We shared the minivan with 2 Israeli girls, (who just got a lift out there) and Joost a young bloke from the Netherlands. We arrived about 830 and the driver escorted us into the park setting a cracking pace which for Michele it was pretty hard to keep up with.

The park were just feeding the baby pandas when we arrived and they brought them out one by one into the enclosure putting them up on a wooden platform where they’d set up a heap of bamboo for them to eat. The babies seemed a bit clumsy as they climbed around the platform. One baby got into the swing of it straight away, just lying on it’s back munching away.

We must have clicked about one hundred photos just watching them as they fed and played. Joost wanted to get his photo taken with a baby Panda but he hadn’t packed enough money, and they only accepted cash. To have his photo taken he had to donate ¥2,000c( $360aus) to the Panda Fund, but he was ¥1,000 short (he was lucky the Bank of Dad, well someone else’s Dad, was there with a little bit of Cyril Ash to save the day).

While we were waiting for the baby panda photo shoot we visited the Red Pandas. The Red Pandas were happily munching on carrots, fruit and bamboo when we arrived. There were a couple of enclosures which had openings for the red pandas to leave their caged areas and cross the boardwalk. There were signs warning people of the dangers of messing with a cute, cuddly animal with sharp teeth and claws and an appetite for flesh. It was here that we learned that Red Pandas in the wild eat fruit, bamboo, birds and their eggs. I’m sure if the bird who was trying to steal some of the fruit had read the sign it may have changed its mind about trying to steal the red pandas fruit.

We went past a number of Red Panda enclosures and it was great to see them on the ground up close and eating. We’ve seen them in the past but usually they’re high up in a tree, so not so easy to see.

The Giant Panda area was across two suspension bridges which Michele had the damnedest time trying to cross. Every time she steps on a suspension bridge there’s always some joker bouncing the bridge up and down and side to side. I looked around but I couldn’t spot who was swinging the bridge. They’re crafty beggars.

A few of the adult pandas were out in their enclosures munching away on their bamboo. We watched one who would pull a bamboo branch out of the hole in the ground then bite and break the bottom 30 centimetres off the branch. The panda would discard the top part and then just bite and strip the outside bark off the bamboo before chewing the inside. Soon there was a pile of branches on the ground minus the bottom 30 centimetres.

There was another baby panda enclosure and after eating some were sleeping however others couldn’t sleep as there were some who just wanted to play. One was happily asleep in the fork of a tree when another climbed up the tree and climbed on top of it and started to play. Another one joined them and then they all started fighting and playing. There was an attendant in the enclosure taking photos and doing some monitoring and a baby took an interest in him and kept following him.

The baby’s looked really clumsy in the trees and we thought at any time they were going to fall out of the tree as they were perched precariously on such tiny branches but they were actually really quite good climbers and would hang on with one paw.

Joost and the driver departed for the photo shoot and we stayed watching the panda baby’s. The crowds of people filed through, oohing and aahing, and laughing at their antics. They were sooooo cute.

Eventually it was time to rendezvous with Joost and the driver so we caught an electric shuttle back to near the lake area. We did a quick lap around the lake, spotting black swans and baby cygnets, a few geese, a few ducks and heaps of well-fed Koi carp. The local cafe sold small bags of feed but judging by the empty plastic bags discarded around the lake not everyone is a conservationist. We were planning on having coffee but refused to pay the $7 for one cup. It was quite beautiful around the lake with all the blossoms out brightening up the area.

We caught up with the other two and finished our tour through the discovery centre where we learnt some interesting facts. Giant Pandas aren’t related to Red Pandas. There are only about 297 in the wild in the area around Chengdu, and maybe only 2,000 left throughout China. Their main problems of course are habitat destruction, which is not surprising. They’re carnivores and as such have a small digestive tract. They eat heaps of bamboo, up to about 14 kg per day, but because bamboo is mainly cellulose can’t process it all, just the protein and the sugars so do heaps of bright green panda poos, up to about 40 a day.  Best not to step in those. When the babies are born their digestive tracts are sterile so they have to eat some of their mother’s faeces to get the necessary bacteria to digest bamboo.

They are solitary animals and mark their territory with urine and claw marks, only meeting up for breeding. They’re usually docile but will attack if annoyed. One of the early emperors had some trained for battle, and another when going into battle flew a flag with a panda on it. His adversary immediately sorted a peace deal.

When we returned to the city and we headed out to Mao Tse Tung’s statue by bus. On the bus we met a young girl about 9, who was learning English and was happily chatting away, sometimes forgetting and speaking in Chinese. She even gave Michele a tiny box of wildflowers which was quite sweet. Unfortunately we had to leave without getting a photo for a memoirs.

Chairman Mao’s statue overlooks a large public area, with grassed areas (banned from the public), fountains and monuments. I’m not too sure if we felt safe or not in this square because there where squads of pimply faced soldiers with riot gear and automatic weapons marching through the park. There were also policemen stationed throughout the park near big silver boxes (we weren’t too sure if they contained guns or not.

While we were in the park two young blokes came up to me and wanted to have their picture taken with me (I guess they’re fans of my Honda live the impossible dream ad, from a while ago which you can see on youtube)

We had lunch in a food court at a nearby shopping centre and headed to the People’s Park where we walked around checking out the facilities and the layout. There’s a few really nice tearooms, lakes and flower gardens. It was pretty late in the day so we decided to return earlier tomorrow. The locals were doing all sorts of activities from choir practice, to doing a ministry of silly walk, to folk dancing to music played on a transistor radio.

We returned to the park near Chairman Mao in time for the fountain display, with all the fountains all going off at the same time. The buildings surrounding the square were covered with all sorts of neon lights and designs a bit like Hong Kong back in the day. We sort of wondered when we looked across at Chairman Mao’s statue with raised hand, what he would have thought about the changes.

We finished the evening with a visit to Ben French Teppinyaki, purely by accident. There was a Department Stoire so we decided to use their facilities as they are normally clean and have western toilets. We discovered there was a food hall and checked it out. Michele and I selected a meat and seafood dish each and when we saw the price we wondered where the catch was. Chicken and spinach soup, garlic bread,  fried cabbage with bacon, fried King Prawns, Salmon, Fresh Sardines, sirloin and fillet steak in pepper sauce, rice and tea coffee soft drinks and dessert, we wondered if someone had dropped a zero off somewhere. The meal was excellent and all cooked on the hotplate at the table. Using my finest Chinese I tried to complement the chef saying the meal was delicious, but he stood there staring at me, it was lost in translation. All up the meal cost only ¥116 ( just on $20 Aus), well we couldn’t believe it and may try and slip back tomorrow what a bargain.

A local bus ride home, thank goodness for Googlemaps, we can look anything up and it tells us bus numbers and we follow the route to get off on time.