Today we were going to retrace some of our steps and ride back up to the Exmoor National Park, visiting Lynton, Lynmouth and Arlington Court along the way. The day started with a full cooked breakfast at the Hoops Inn after one of the best nights sleep since leaving home, we were so impressed with the hotel we booked another night.

Once getting through the traffic of Bideford and Barnstaple we continued up the A39 down to Lynton. Lynton was a popular spot for Victorian holiday makers who travelled by train to holiday by the sea. A cliff top railway was installed to connect Lynton at the top of the cliff with Lynmouth at the base of the cliff. There were cliff top railways all around the UK but there are only two which are water powered, this being one of them.

It’s a simple setup with a water tank under each of the two carriages. The two carriages are joined by a wire which goes over a big pulley. When the carriage reaches the top the driver opens a water valve and the underfloor tank fills up. When the lift is ready to go the driver on the bottom carriage opens the drain on his underfloor tank and the tank empties. The carriage at the top being heavier than the one at he bottom starts to fall and the one at the bottom starts to rise. Rather ingenious really.

We took the lift to the bottom and had a look around Lynmouth. Lynmouth is a beautiful little town straddling the river. In the town is a Memorial Hall remembering the two main incidents which have affected the town. In 1952 a major rain-burst of 9 inches in 24 hours fell on the rain soaked Exmoor flooding the Lyn River which flowed down through the town destroying 100 houses, causing major damage and killing 34 people. The memorial hall has photos of the devastation, stories and news reel footage. It was a story of courage and determination.

We stopped off for a cream tea and scones, although they don’t call it a Devonshire cream tea. Unlike our cream at home the clotted cream here is almost as thick as butter.

We returned to the cliff train and caught it back to the top to Lynton, where we checked out the local church before getting back on the bike and riding down through Lynmouth and up Countisbury hill and over the top. On top of the hill there were heaps of wild Exmoor ponies grazing. The Exmoor ponies are hardy little horses and have adapted to their environment with winter coats to deflect the water and keep them warm on the cold windswept moorland. It’s said that they are one of the original horse breeds of England. 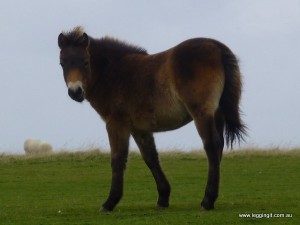 We rode back down through Lynmouth and up the hill. The ride back from Lynton took us past Woody Bay Train Station which is the home of the Lynton and Barnstaple Railway. The narrow gauge rail ran from Barnstaple to Woody Bay and this station is one of the originals which opened in 1898 and closed in 1937 when the railway shutdown due to competition with road transport.

The L & B revival story is an interesting read. After the railway closed the trackbed was sold off to over 100 different landowners which mad it difficult for the organisation to rebuild the railway. The organisation started in 1979 but it was not until 1995 until they were able to purchase the Woody Bay station, but no trackbed. It took another nine years, further land deals, restoration and lots of hard work before the railway was able to carry its first passengers. They started off just operating on weekends with 600 yards of track, a diesel locomotive and theme park carriages and have slowly increased to almost all year round service using the original 100 year old carriages being hauled by a steam engine over a mile of track. Its a real positive for the local community as the L & B Railway are staffed by mainly by volunteers as the L&B is a non profit organisation with the aim to claim as much of the old railway as possible. So train buffs get to do something they love and provide a service to other train buffs and train lovers in general. The L&B are planning the expansion of the line from Killington Lane to Wistlandpound which will be awesome.

The Woody Bay Station is like stepping back in time with all the old posters and baggage trolleys you’d expect around a station. There are beautifully restored tearooms and lots of friendly faces only too willing to help. At one end not far from the station is the workshop where the different locomotives and carriages are stored and repaired. There’s a few different loco’s including diesel and steam ones. A small information room has photos and stories of the L&B including its origins, demise and revival. There’s bits on the loco’s and carriages and restoration.

We boarded a beautifully restored first class carriage as the locomotive worked up a head of steam and soon we were off passing through the picturesque Exmoor countryside. This part of Devon is truly magical with colours that are hard to describe the true beauty of. At the end of the line we waited about five minutes for the engine to unhook and then reattach to the other end of the train before we made our way back. Some people take advantage of the break to take a stroll in the countryside as there are lots of public walkways which cut through farmers fields and they can return on a later train.

As we had planned to visit Arlington Court we decided to keep our visit short.
Arlington Court is the oddest looking mansion with one side a concrete grey colour and the newer extensions a green colour. The mansion was gifted to the National Trust by Rosalie Chichester the last owner of the house after she visited Australia, she was so impressed with their National Parks system and how the public were allowed to access such area. When she returned she bestowed her home to the National Trust with one request that it was kept as a home so when you arrive you ring the doorbell and the door is opened by a friendly volunteer. It’s a great touch.

Rosalie was a strong willed woman who travelled to Australia and New Zealand with her friend, quite impressive for the times. She was also against hunting and took a stand against the local hunt clubs crossing her property hunting stags. This of course didn’t go down well with the locals. In her later years as she became less mobile she only used a few rooms on the ground floor but as she was a collector of many things it is fascinating house to visit.

One thing that was really interesting was this Tepoy. 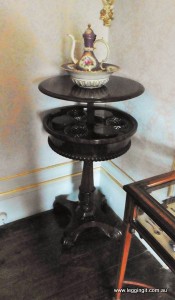 It was actually a tea holder. As tea was so expensive it was locked, wheeled to the table where it was opened by the Butler. The lady of the house then blended the tea to suit he guests and then it was locked and removed again.

Also on the estate is the Carriage Museum which houses 50 carriages ranging from Hansom Cabs, Broughams to the Speakers Carriage. There’s all sorts of horse drawn vehicles and all sizes. It was really interesting wandering through all the carriages and learning a little about heir designs and use. The speakers carriage is currently being displayed at the museum. It was stripped of all of its paintwork before being meticulously restored in all it’s finery. Unfortunately we weren’t allowed to take photos but seeing this gilded carriage close up was unbelievable.
As the estate was closing we made our way back to the bike and headed back to the Hoops Inn for dinner.

Tomorrow we head for Lands End.