Another beautiful autumn day greeted us as we headed out of Paris bound for  Château De Vaux Le Vicomte about 60 km’s from Paris. There’s rain forecasted this weekend and all along the way farmers are busy harrowing their fields in readiness.

A long avenue of trees lead towards the Château De Vaux Le Vicomte which suddenly appears at the end of the avenue. Beyond the magnificent steel fencing lies the moated chateau.

Vaux Le Vicomte was built by Nicolas Fouquet, in the mid 1600’s combining the skills of architect Louis Le Vau, painter Charles Le Brun, and garden designer André le Nôtre. The landscape was transformed with the deviation of the creek into underground piping to supply water to the moat and fountains. The river was transformed to become a grand canal lined with fountains on one side and a grotto on the other.

All sorts of optical illusions were used to create the gardens, including oval shaped pools which look round when viewed from the house, large pools which create a reflection of the house, symmetrical gardens, long gravel walks which draw the eye, and the use of the undulating landscape to make objects appear closer than what they really are. Nicholas Fouquet hosted a huge party for the King Louis XIV when the gardens were completed in 1661 only to find himself arrested three weeks later for embezzling money from the state in his role as superintendent of finances.

It’s said that 22 year old Louis XIV was scared of the power that Nicholas wielded. The extravagant displays of wealth such as Chateau De Vaux Le Vicomte (that rivalled the royal palaces), which he filled with antiques, paintings, jewels and rare manuscripts sealed his fate. (Along with the corrupt French economy in tatters). He was imprisoned from 1661 until his death in 1680 and the current owners claim he was the inspiration for Alexander Dumas’ book “The Man in The Iron Mask”. 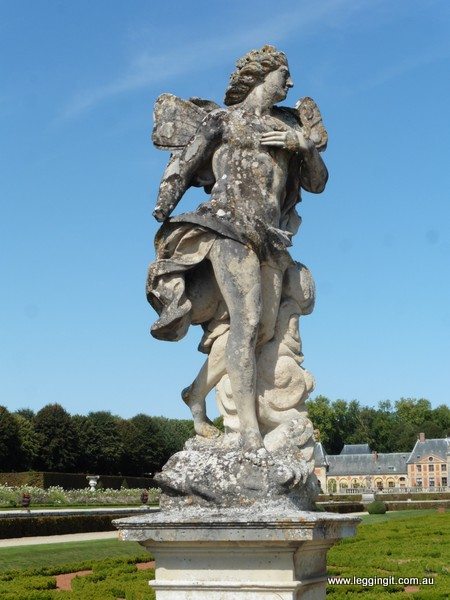 These days the chateau has been restored to its former glory with audio visual displays telling the story of the chateau, design of the gardens and some of the key characters. The interior of the chateau is decorated with fine furniture, and elaborate fittings which give the sense that the owners have just stepped out of the room. Looking out of the window over the gardens you get a real appreciation of the grandeur of the gardens. We walked around the gardens and probably should have hired a golf buggy like everyone else, because it’s much longer than it appears. Yes good work André le Nôtre, you fooled us too. 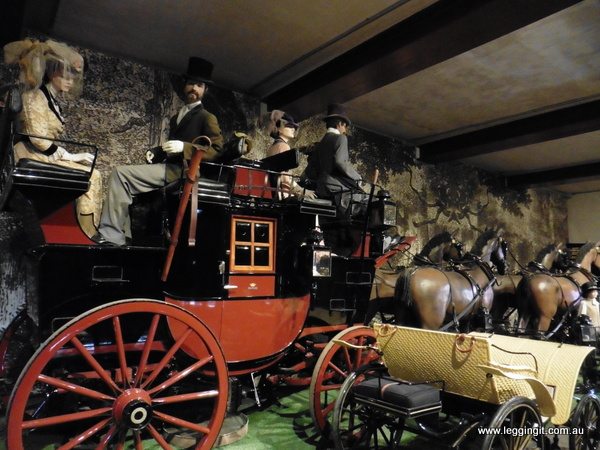 In the entry buildings, the stables house a magnificent collection of carriages of different styles which have been beautifully restored. There’s also a modern restaurant cafe nearby in another part of the building where we enjoyed lunch in the sun.

Overall we had a lovely visit to Chateau De Vaux Vicomte and it’d be a great place to visit on one of the special days or evenings when all of the fountains are operating and it is all lit by candlelight.

The Chateau is accessable by public transport and you can get more information here.