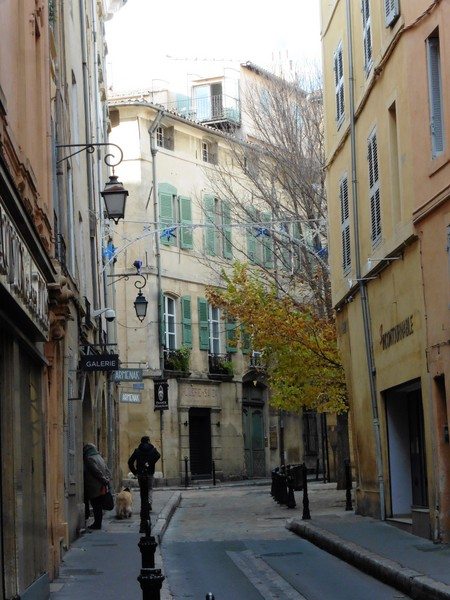 Once again the weather was tremendous for a winters day as we rode into Aix-en-Provence. Its quite remarkable how warm this area is compared to the rest of France.

Our first stop was the Tourist Office in quite a modern area of the city centre. It was one of the most modern tourist offices we’ve seen and really well organised. The tourist office features large free standing interactive screens displaying all the different sights, activities and festivals currently taking place around the city and surrounds. It was quite easy to navigate around the screens and see what was on.
Around the Tourist Office Aix-en-Provence was hosting an International Food Fair. It consisted of stalls with food from different regions of about twenty odd countries. Many of the regions we’d never heard of before so it’s was quite fascinating. The stalls inside the marques were promoting tourism whilst selling some of their regional products. In the stalls in piazza they were cooking fresh food so the aroma of spices and cooked meats filled the air. 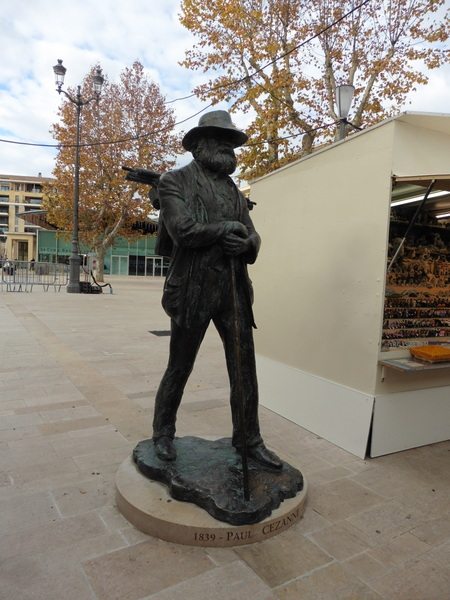 Using a walking guide we set off to discover Aix-en-Provence. In the piazza surrounding the tourist office is a statue to Paul Cezane, one of Aix-en-Provence’s favourite sons. It wasn’t always like that, a few years before his death in 1906, he fell foul of the local art critics. The local intelligentsia ridiculed his art and went as far as to tell him to leave town. However, his post-impressionist style of art was to inspire 20th century artists such as Picasso and Mattise. It was the link between Impressionism in the 19th century and cubism of the 20th century. Much of his painting was done around Aix-en-Provence and his studio, L’atelier Cézanne, is now a museum. Like most artists their art is appreciated more once they’re dead.

Opposite the statue is the Fountaine de la Rotunde. It forms the centre of the traffic roundabout. Built in 1860 and featuring sculptures of three of Aix-en-Provence’s most famous sculptors the fountain is beautiful. At the moment it’s decorated with garlands of lights for the Christmas period. 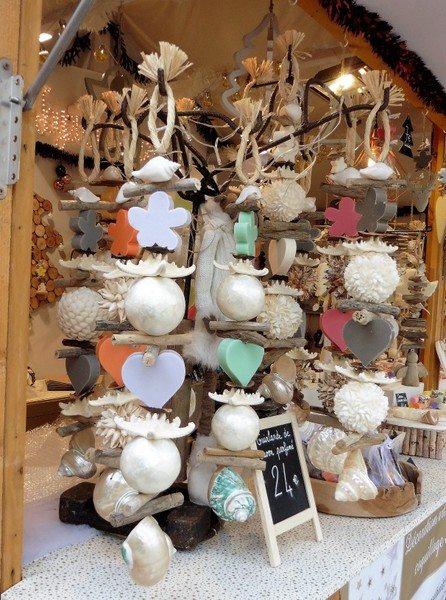 Around Place de la Rotunde and extending the length of Cours Mirabeau are Christmas markets. Porcelain nativity scenes and figurines feature quite a lot, along with baubles and other Christmas decorations. The tree lined boulevard is wide with buildings set well back giving it a sense of space and grandeur. Along the boulevard, smoke and the smell of roasting chestnuts permeated the air. The seller splitting the chestnuts skin with a paring knife. Eating roasted chestnuts at Christmas is one tradition we just haven’t gotten into. The soft centres of roasted chestnuts just doesn’t feel right. 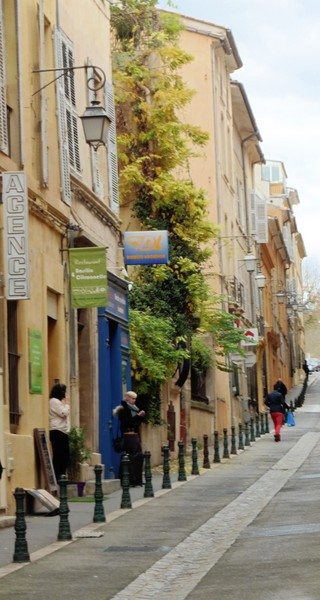 The walk along Cours Mirabeau is quite nice surrounded by plane trees and a few interesting fountains along the way.
Our walk led us into the old town where an interesting mix of old buildings greeted us. There were medieval half timbered buildings and later 18th and 19th century buildings. Much of the old town is shopping with pedestrian walkways. There’s lots of boutique style shops with lots of variety. Aix-en-Provence is a university city so the streets and cafe’s were filled with young people. It really gave the city a feeling of being alive. 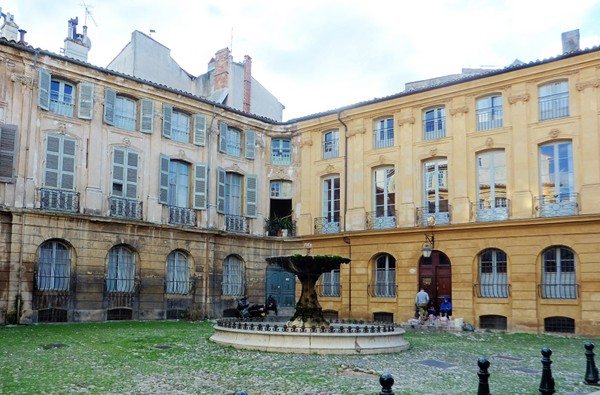 Atlas Obscura mentioned Place d’Albertas, in the centre of the old city, as a quirky place to visit. It was here that Georges Vallon Jean-Baptiste d’Albertas bought not just one building but most of the buildings on Rue Espariat in 1745. Legend has it that he bought one mansion to show off his wealth. Little did he know that he had bought a building in the middle of a brothel street. In fact a brothel had operated next door since ancient times. To advertise their profession their building featured metal work penises on its second floor balconies. 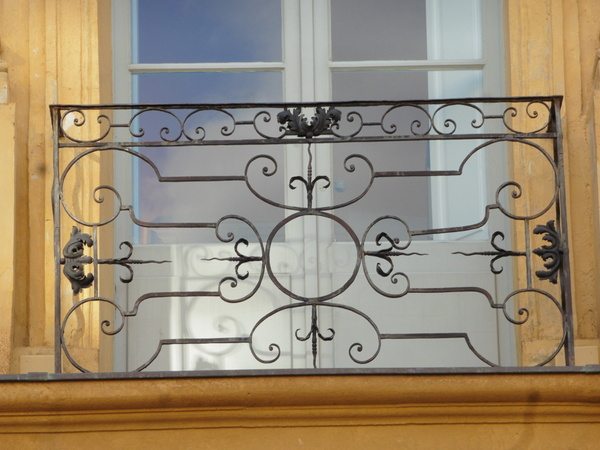 Albertas bought the building next to his and all the buildings in the street facing his mansion. He then rebuilt them in Parisian Haussmann style. The building facing his was demolished and a fountain built surrounded by a cobbled square.
However, keeping with the former style of the street the metal work balconies on all of his new buildings featured penises. 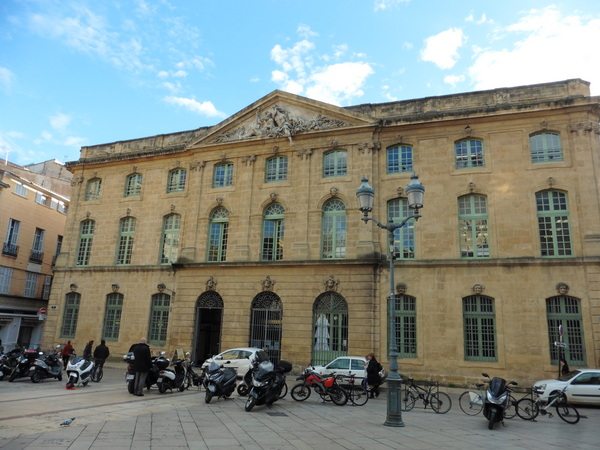 The Hotel De Ville fronts a large square which is also fronted by Halle Aux Grains. The old 17th century grain office features two statues which represent the Rhone and Durance rivers.
Near the Hotel DeVille an old roman gate is a reminder of the cities ancient past. Aix-En-Provence can trace its origins to roman settlement in 123 BC.
After wandering around the rabbit warren of streets in the medieval section we crossed over Cours Mirabeau into the 18th century Mazarin area. Haussmann style architecture featured on the large buildings in the area. Even the grid pattern of streets was large. It was definitely a wealthy part of the city. 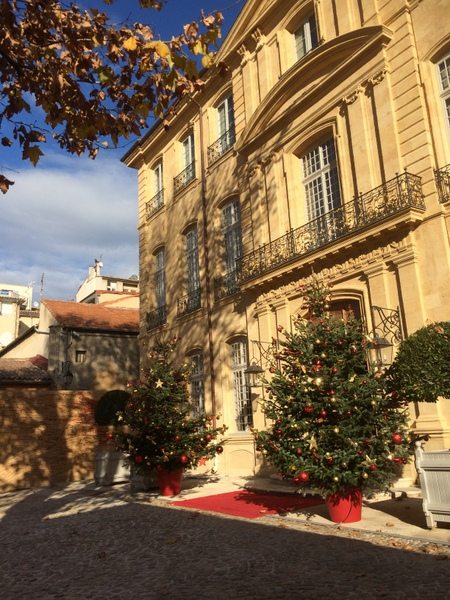 In the area we visited the Caumont Centre d’Art, which featured an exhibition on Marilyn Monroe entitled “I Want To Be Loved By You”. The exhibition of items, from private collections, featured 60 photos and multi media exhibits of the star. Michele was quite interested however my enthusiasm level to visit another museum was running at an all time low. This combined with an inflated ticket price saw us splitting up with me opting to spend my money on coffee. Nearby there was an English book cafe which was really good so I took my leave.

Caumont Centre d’Art was really well set up first you visited a video display on Paul Cezane, it gave an interesting insight into his life and how his art developed over the years, I am no art fan but found it really interesting, 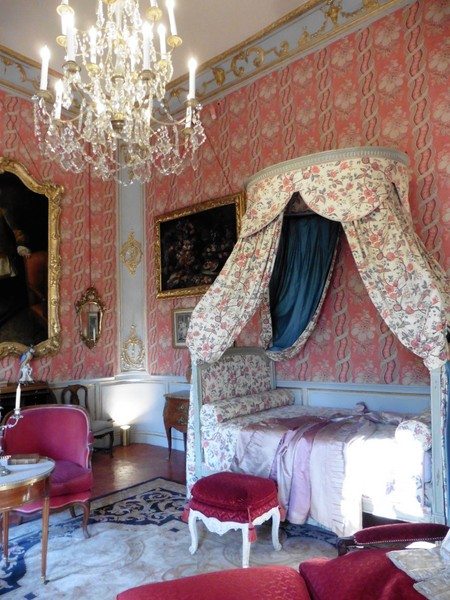 From there I went downstairs and into the centre itself, there are beautiful tearooms where you can enjoy both the stunning room and the gardens. Upstairs two rooms are set up to what it looked like when the building was in it’s prime as a home. 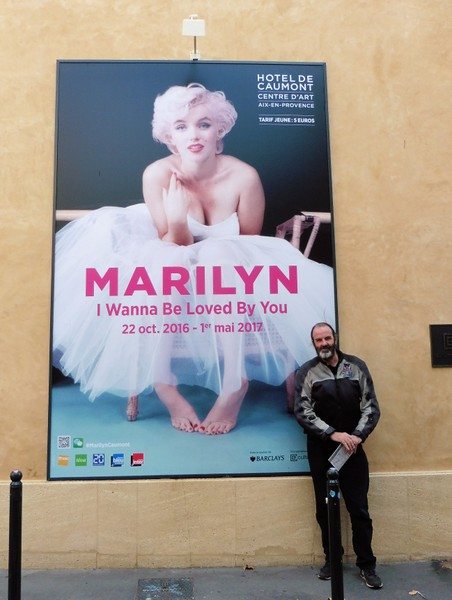 From there I headed into the Marilyn Munroe exhibition, I was amazed at the diversity of photos of her but at the same time saddened to see how she was manipulated and used by photographers. From nude calendars to glamour shots she did them all. The downfall for me was there was no English translations of anything so I never got to put the photos into any real perspective.

Once I finished I headed across to find Ron sitting comfortable in a lounge chair in the bookshop cafe enjoying a coffee. 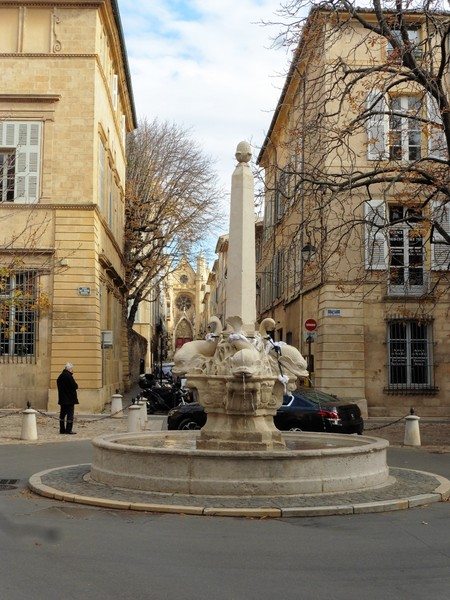 On our way back towards Cours Mirabeau we passed the Place Et Fontaine Des 4 Dauphins. The fountain features four dolphins which of course look nothing like dolphins. It’s surrounded by beautiful mansions which are a feature of the Mazarin section. 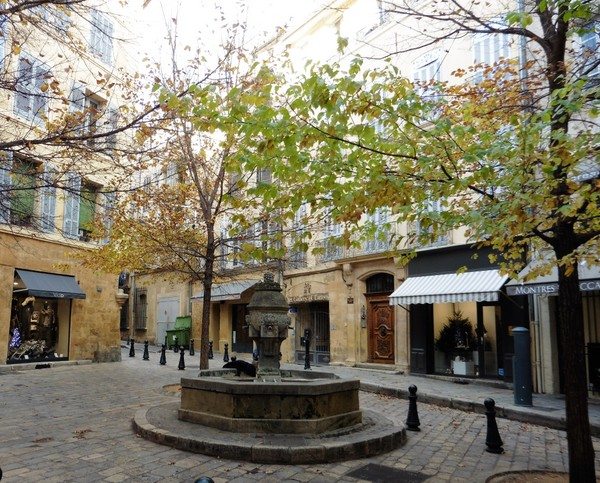 After a lovely day walking around Aix-En-Provence we headed back to the hotel. Tomorrow we are going to explore a bit of Provence and visit some more of the locations from the movie “A Good Year” starring Russell Crowe. It’s the whole reason why we are here, after watching the movie Michele fell in love with the region and dreamt of coming here.

One thought on “Aix-En-Provence, the Perfect Place For A Meander”