Well it was an early morning wake up this morning as the neighbours at the hotel had a full on barny at 3:30 am. It continued for about two hours with the woman inside the room yelling, screaming and banging things, whilst the guy was outside pleading to be let in. The hotel didn’t man the reception overnight and there was no way to contact them, so the yelling continued unabated.
Eventually the yelling stopped and the door opened. Not long after they were snoring and we were left wide awake.
The bonus was it gave us an early start to the day. Today we visited more of the filming locations around Provence from the movie “A Good Year” featuring Russell Crowe. The weather was glorious for a ride in the countryside through fields of lavender and grapevines. 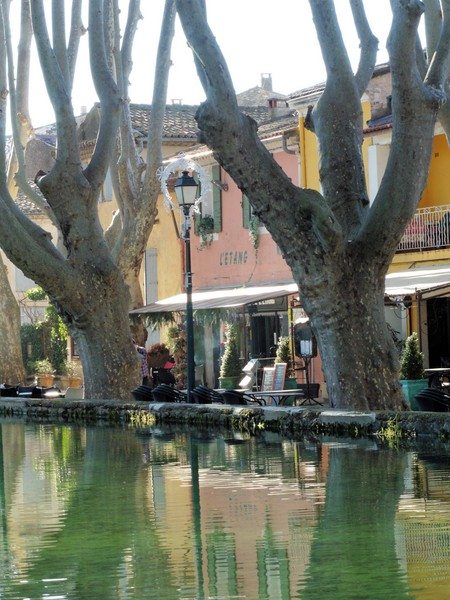 Our first stop was the village of Cucuron, not far from the town of Cadenet. The village is set on a small hill overlooking vineyards and olive trees. We found a spot to park the bike near the cafe’s, which overlook the old water supply. It’s a long above ground water storage about 30 metres long and surrounded by plane trees. We’d arrived on market day so the pool was surrounded by stalls selling fruit and vegetables, soaps, pottery, cheese, saucissons, oysters, fish, clothes, jewellery, and pizza. 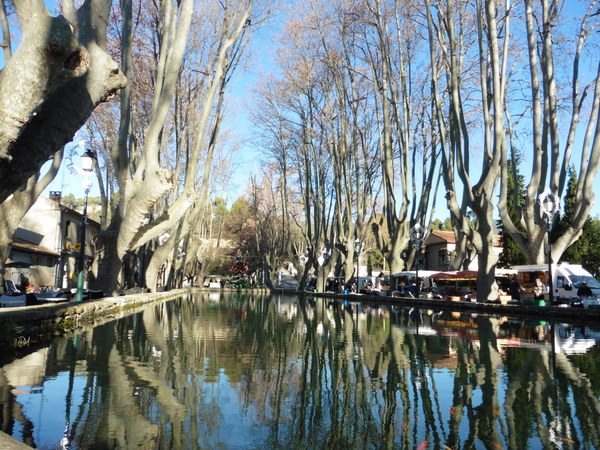 It looked so different from in the movie. In “A Good Life” a movie screen was at one end and fairy lights were strung between the trees. It was the setting for Max (Russel Crowe) and Fannys (Marion Cotillard) first date at Café L’Etang. By pure chance we sat in the spot where they sat and had lost in translation moment. I ordered a cafe allong but a glass of rose arrived. 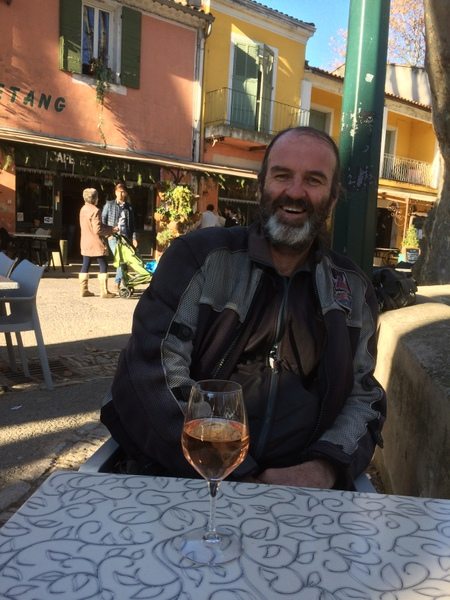 It was a wonderful setting amongst the trees with a little sun, people chatting whilst drinking wine, with the market in the background. With a little glow in our cheeks we went for a walk around the village. Near the water supply a cobbled street leads through a restored castle gate. 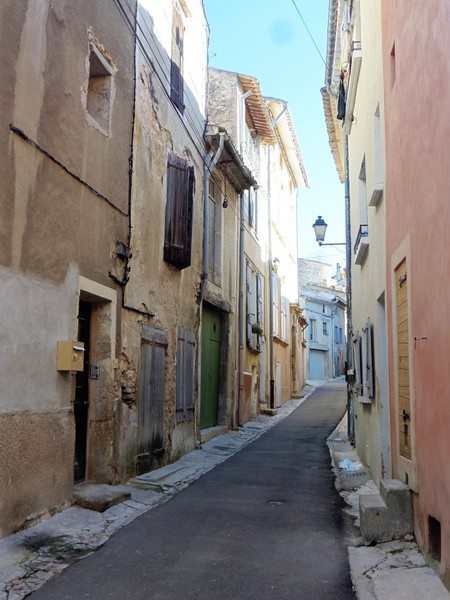 Around the village where there are lots of beautifully restored stone houses with terracotta roofs. 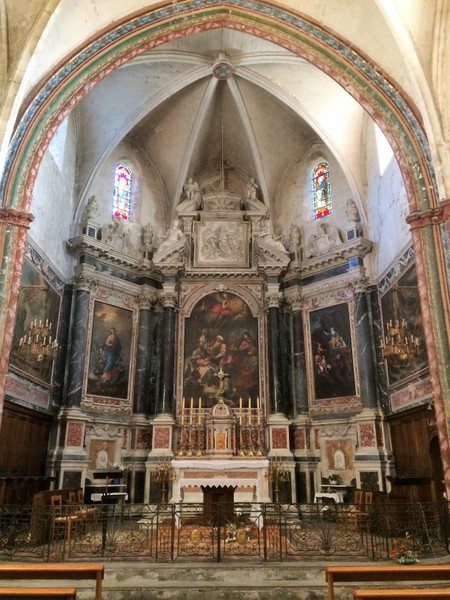 The Notre Dame de Beaulieu church is one of two churches in the village. It dates from 1292 but has had a lot of renovations. The massive facade is pretty imposing with just a small arch and door on the centre. It’s built in Romanesque style which seems quite typical of the south of France. It almost has a Spanish feel about it. Inside the church was fairly simple as would be expected in a small village. 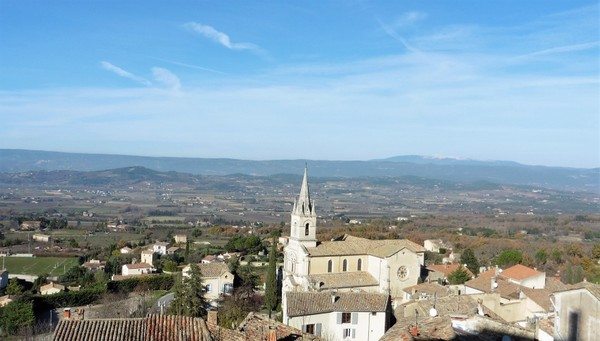 Heading out of Cucuron we headed towards Bonnieux a small town built on the hill. We passed through Bonnieux on our way into Aix-en-Provence. In the movie “A Good Year” some of the panoramic views were taken looking out across lavender fields and grapes towards Lacoste. 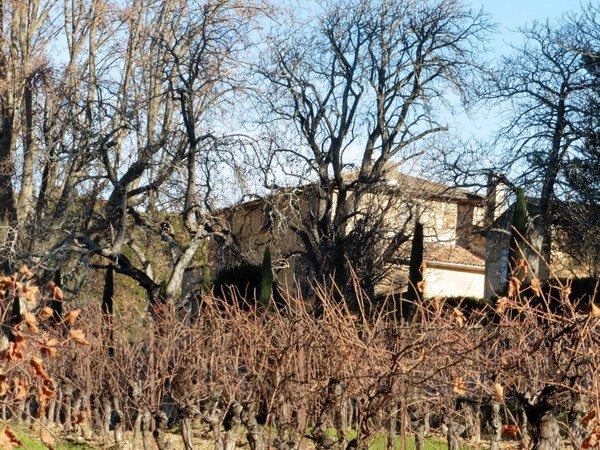 About a kilometre from Bonnieux on the road towards Pont Julien is Château la Canorgue, the chateau which Max inherits in the movie. To the right of the entry road are the overgrown gates of the chateau, just like in the movie. 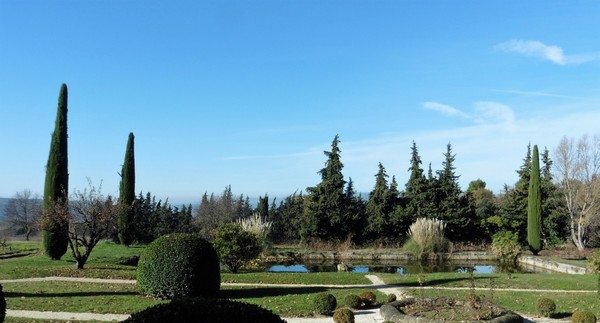 Riding down the driveway the pool which featured in the movie was on the left side of the road just below the chateau. The pool was installed for the movie but left in position afterwards. It was fabulous just reliving the movie just looking at the chateau and the pool below it. The chateau operates as a winery and is open for wine tasting and sales daily. Supposedly the winery is trying to shake the movie connection. They’re probably sick of Australians turning up looking around. It explains why there’s a big “no entry” sign near the chateau.

About two kilometres further down the road is Pont Julien, a Roman stone arch bridge dating from 3 BC. It was part of Via Domitia, the road which passed through southern france connecting Italy and Spain. It’s quite amazing that the bridge was used for car traffic right up until 2005 when a replacement bridge was built alongside it. These days it’s part of a cycle way but its pretty amazing that the bridge was used for over 2,000 years. 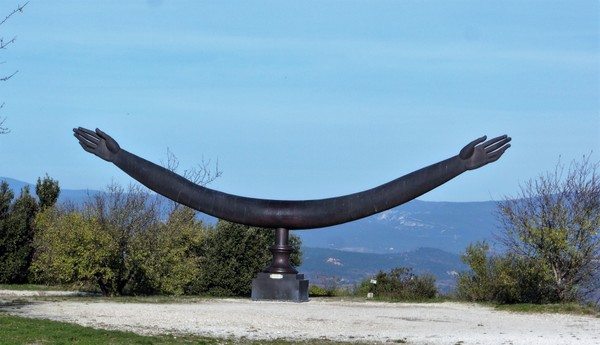 From Pont Julien we headed up to Lacoste, another hill top town featured in the movie. Lacoste’s Cafe de France of course is the location. We wound our way up through the village on winding roads. There were excellent views across the valley towards Bonnieux as we wound back and forth up the hill. On the top of the hill is the former home of the Marquis de Sade, Chateau de Lacoste. The Marquis was a much reviled figure during his lifetime and spent 32 years of his life in prison or in an asylum. The 11th century chateau was looted during the French Revolution and subsequently quarried for its stone. These days it’s a historic ruin and artspace with the most amazing bronze sculpture.

Winding back down the hill we headed towards Saignon, the setting for the book “The Lavender Keeper” which Michele loved. Saignon is set on a rocky hill above the city of Apt. It was almost deserted when we visited and we managed to walk through the village only seeing two people. Saignon has an 11th century church, abbey and ruins of old olive presses in caves under the hill. 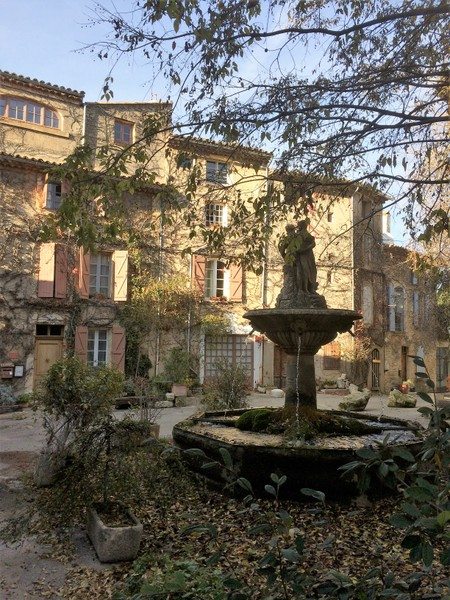 It was another quaint little village full of stone buildings, with small piazzas surrounding the few cafe’s they have.
After a day of exploring Provence looking for movie locations, it was time to head back to Aix-en-Provence.

The ride through little villages and towns was just lovely. Arriving back at the hotel the manager was all apologetic. Hopefully there will be no repeat performance tonight. Tomorrow we’re heading down to Marseille to check it out.