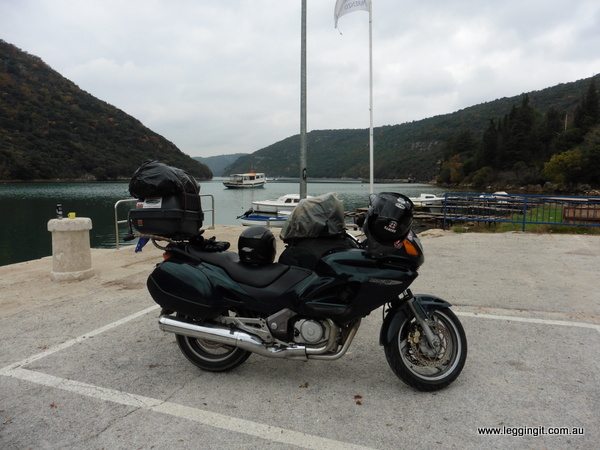 Today we had to leave the Schengen Zone and ride from Portoroź to Pula. It seemed a bit of a shame that we didn’t stay longer in Portoroź because it’s a beautiful place. It’s strange that this tip of Slovenia, only about 25 km’s wide, divides Croatia and Italy. We thought that we should at least check out Portoroź before we left, so we headed to the beach for breakfast. The swankiest looking restaurant which overlooked a beach filled with beach umbrella stands. It was like a minefield or a tank trap with spigots sticking up everywhere. Definitely not the place to go wandering around in the dark when you’re three sheets to the wind. The beach would’ve been perfect in summer with all the evenly spaced umbrellas providing the perfect amount of shade. Hmmmm maybe next time… The restaurant was really good. No breakfast, however nice fresh rolls and great Lavazza coffee (as she picks up the cup and points to the label).
Michele was pretty stressed out that we were going to be denied entry into Croatia because of all the crap about border crossings everyone’s been talking lately. As usual I took it in my stride. I don’t listen to scuttlebutt. I deal in realities. Arriving at the Slovenian border the bag with the passports got stuck in the zip of my jacket so I struggled this way and that to free the zip. The border guard wasn’t very happy, asked us if we were British, but waved us through. Reaching the Croatian border the window slid open. We passed our passports across. Two stamps later the passports were handed back. Simple as…. I don’t know what the stress was about. 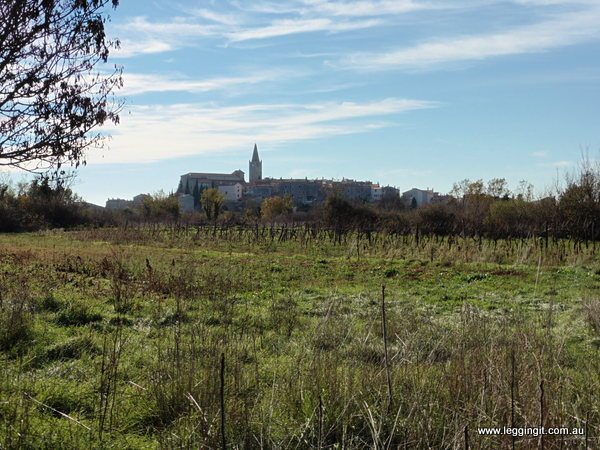 Riding through Croatia there was a noticeable difference in the countryside. Firstly it was colder, so all the Autumn colours were out on the trees. Secondly the earth was a rich red clay. There was lots of olive groves, and vineyards. The architecture was definitely Roman, with lots of old stone houses and terracotta roofs.

It was a great ride which followed the coast, winding through forests. As we were descending down the hills towards Lim Bat, (a lake) we decided to take a break. I broke out the thermos and we enjoyed a cuppa at a deserted resort overlooking the lake. As we were at a closed resort I was struck by a sudden call of nature. Murphy’s Law of course there’s no toilets open. I wandered off following a track and found a secluded spot. As soon as I returned to the bike about a dozen locals came wandering down the road and wandered straight up the track I’d just returned from. Phew that was close. That could’ve been very embarrassing caught out with my trolleys down. Michele was to tell me later that there’s a warning not to wander off tracks as there is still unexploded land mines from the civil war. Thanks for that!

With that we quickly departed the scene, and what a beautiful scene boats floating on crystal clear blue water with multicoloured autumn trees in the hills surrounding the bay.

It was a pretty straight run from there on. Lots of cute little towns which all looked a little rundown, more olive groves and vineyards.

As we rode into Pula something caught the corner of my eye. Holy crap a colosseum! Yep the worlds sixth largest and most complete colosseum greeted us as we made our way trough town. Along the way through town we could see roman towers, churches, arches. Even the local playground had bits of a column kids were playing on. We’re gonna love exploring this place over the next week. Eventually we arrived at the apartment and after getting the keys we did our shopping and settled in for the night. Tomorrow we’ll start exploring Pula.

One thought on “Portoroź to Pula”