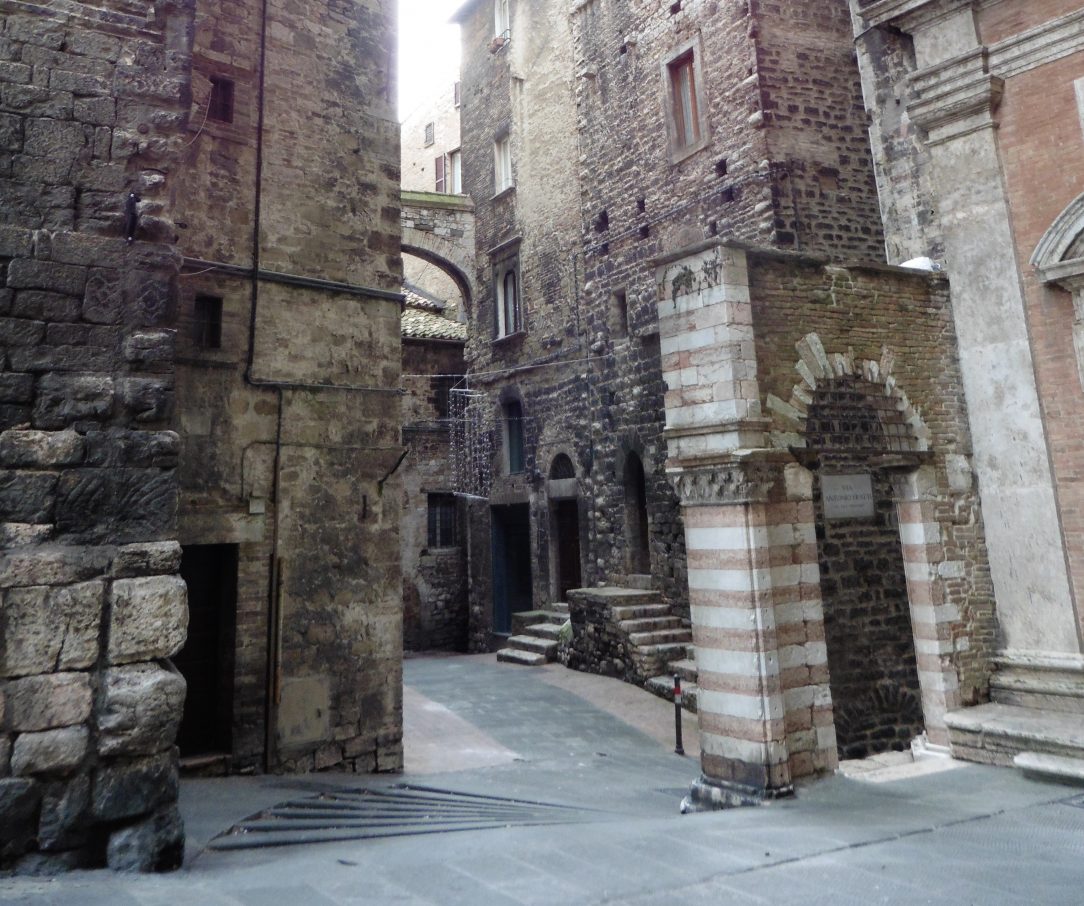 After arriving on Sunday afternoon we spent three nights in Perugia. It was quite a fascinating area with the old fortified city situated on top of the steep hill and a new modern city below it.

A Minimetrò transport system connects the new city to the old city with regular departures every 1.5 minutes. It’s an automated single car system which travels along a rail high above the road. Like a single carriage monorail train, it’s quite an interesting solution to inner-city traffic congestion by connecting the car parks to the city.

Further up the hill, just below the old city, are a few car parks which are connected to the old city via escalators. The streets of the old city are all fairly steep so we took advantage of the escalators at every opportunity when travelling from up the hotel which was located just outside Porta Santa Susanna. 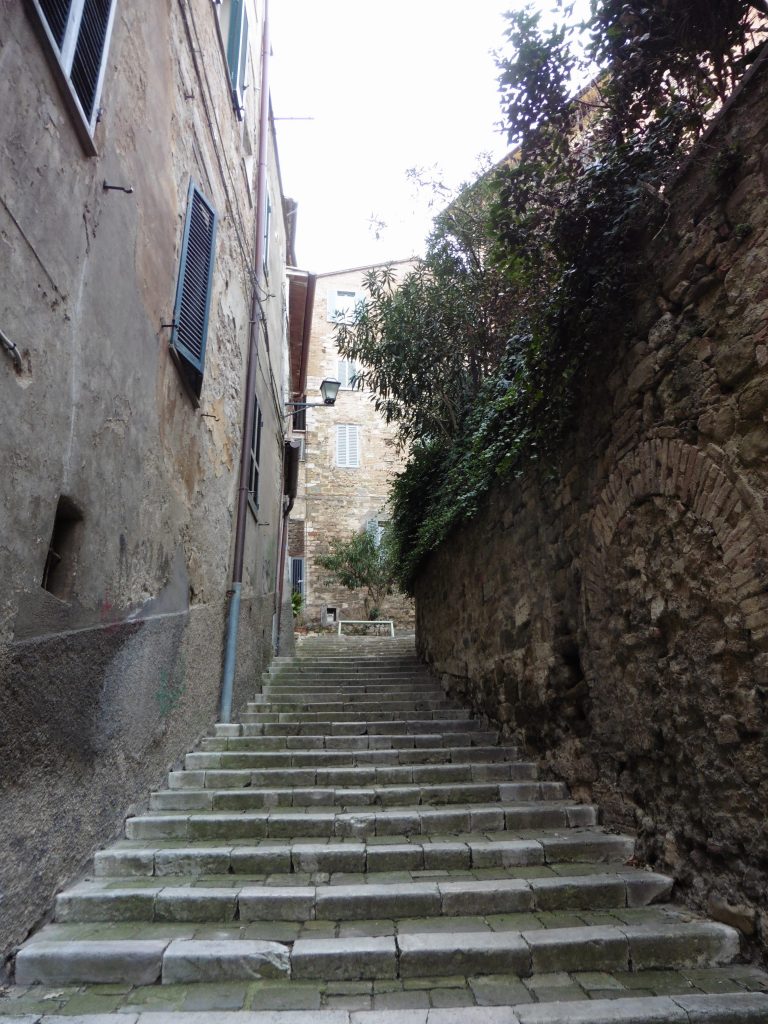 The old city drapes over a long steep gradient and despite the escalators, it’s still a long climb up to the main piazza over the cobbled streets. The old mansions, churches have been retained and combined with the narrow cobbled streets it really has ensured that Perugia has retained its medieval charm.
In the centre of the old city, gothic buildings line the wide Piazza IV Novembre which leads from the Duomo all the way down towards Piazza Italia. 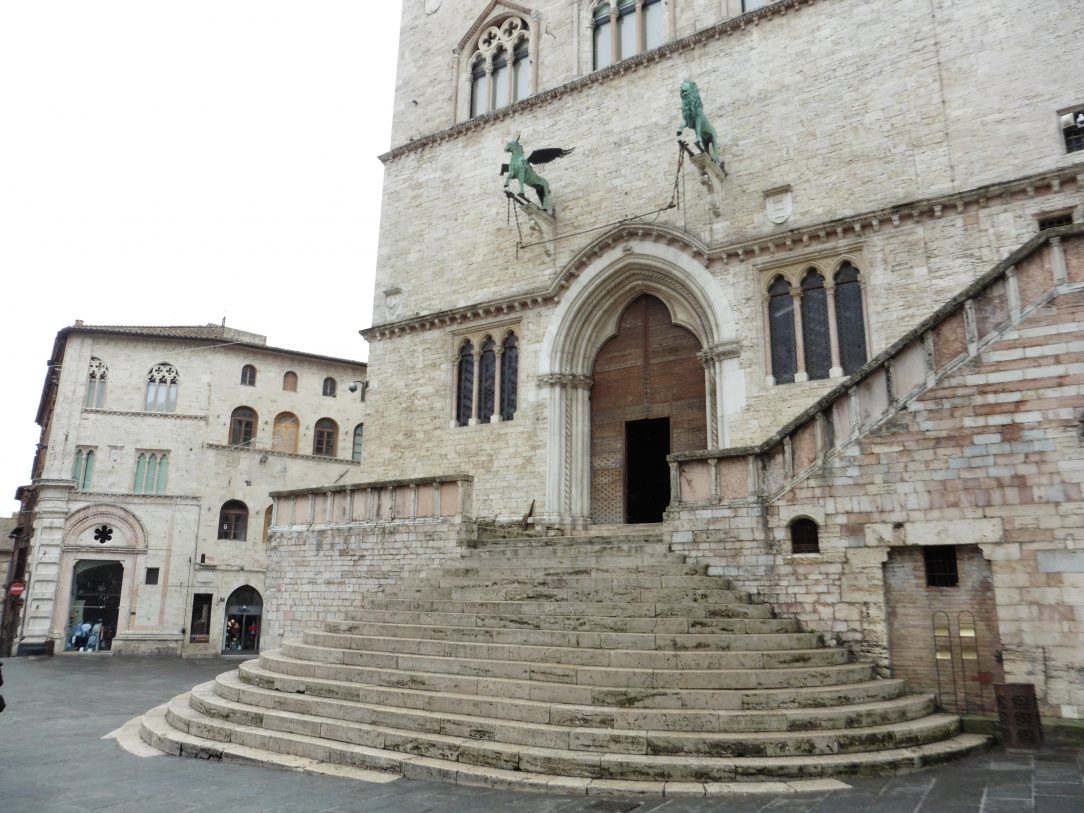 The most imposing of these buildings is the medieval Priori Palace (Palazzo Dei Priori) which is home to the Galleria Nazionale Dell Umbria (National Gallery of Umbria).
Situated in the upper floors of the Palazzo dei Priori, the Galleria Nazionale Dell Umbria exhibits regional art from the 13th century onward. As churches and abbeys were the original places where art flourished the exhibition centres around a vast collection of religious pieces. Perugia developed its own culture of art and it was quite fascinating seeing the changing styles. Over two storeys the exhibition is laid out in chronological order. The art ranges from the Middle Ages to the renaissance featuring some of Italy’s finest artists.

The early art images were very much influenced by Byzantine artists. The Madonna and child are the easiest recognised pieces of art. The gallery has quite a number which have been painted by different artists through different centuries. It’s quite fascinating seeing the changes in facial features, and veils over the centuries. In the 13th century, the madonnas features were dark but by the 18th century the Madonna was blonde with blue eyes and her face shape was quite round. It reflects people’s changing fashion and opinion.
The changing fashion can also be seen in the paintings based on scenes from the bible. In the early paintings, the subjects wore robes but in the later centuries, you’d swear they’d just stepped out of a Parisian fashion house. Even the soldiers looked more like Frankish knights than Roman legionaries.

Some of the everyday items were quite fascinating such as carved wooden chests, ivory triptychs, miniature statues, silver monsterichs, crosses, chalices, plaster statues, and wafer moulds. Like flat round jaffle irons, the collection of wafer moulds was something we’d never seen or even thought of before. Each bore a different inscription for the various bishops and cardinals plus a different design for front or back. In the later years as Perugia became more stable, the artwork became a lot more varied and included frescoes. The fresco within the Palazzo dei Priori even shows the Papal armies in action during the Schmalkaldic Wars. An interactive display explains each panel, points out the different main characters involved and gives a biography of the person. It’s quite well done. One of the more famous pieces was the Polyptych of Perugia created by Piero della Francesco in 1470. Although not entirely completed by him, the elements which he didn’t allow assistants to complete were quite exquisite.

The Master of St Francis 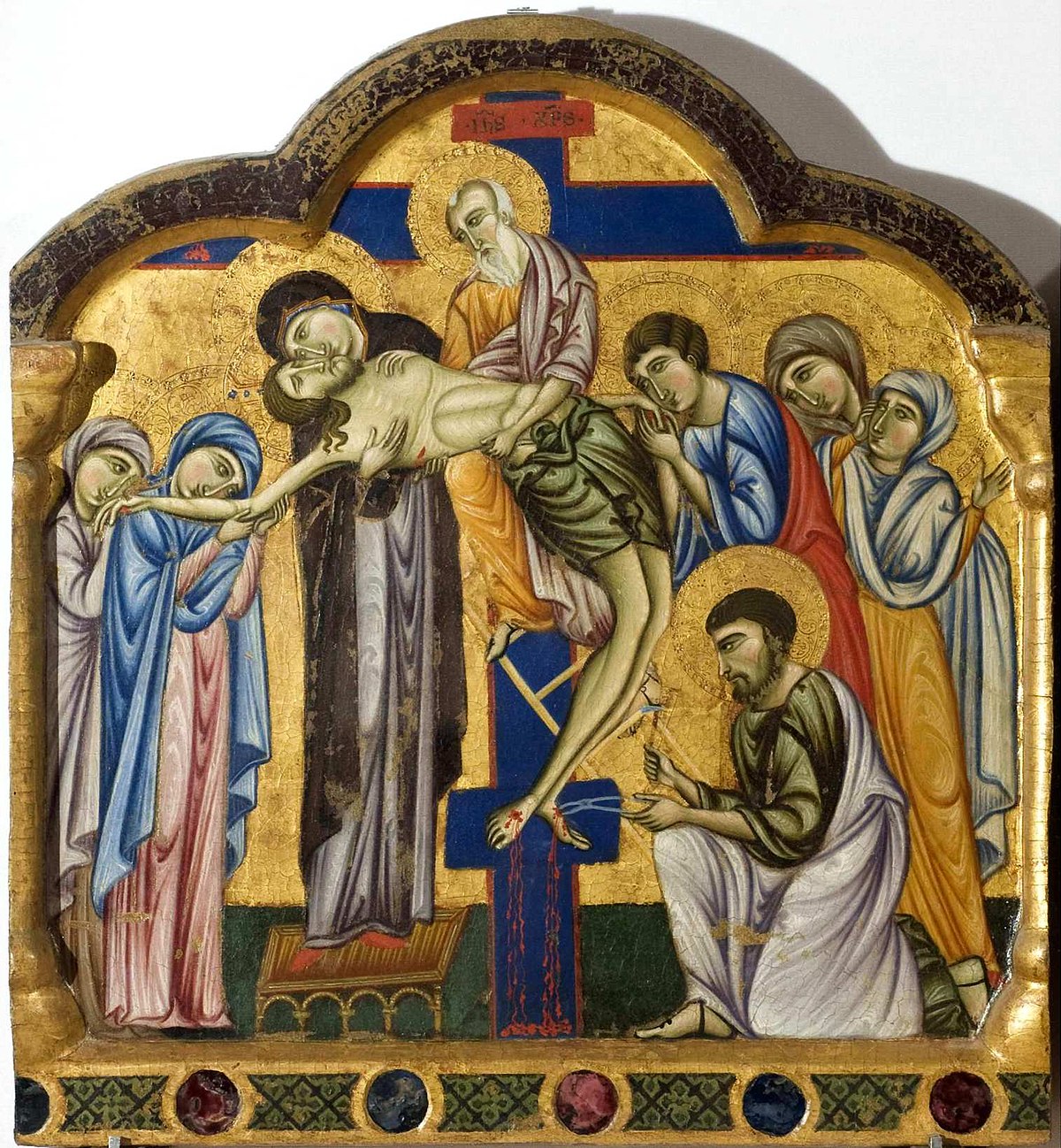 In a separate gallery, four crosses dating from the 13th century are attributed to an unknown artist known only as “The Master of St Francis”. The master painted frescoes and panels combining Italian and Byzantine art. 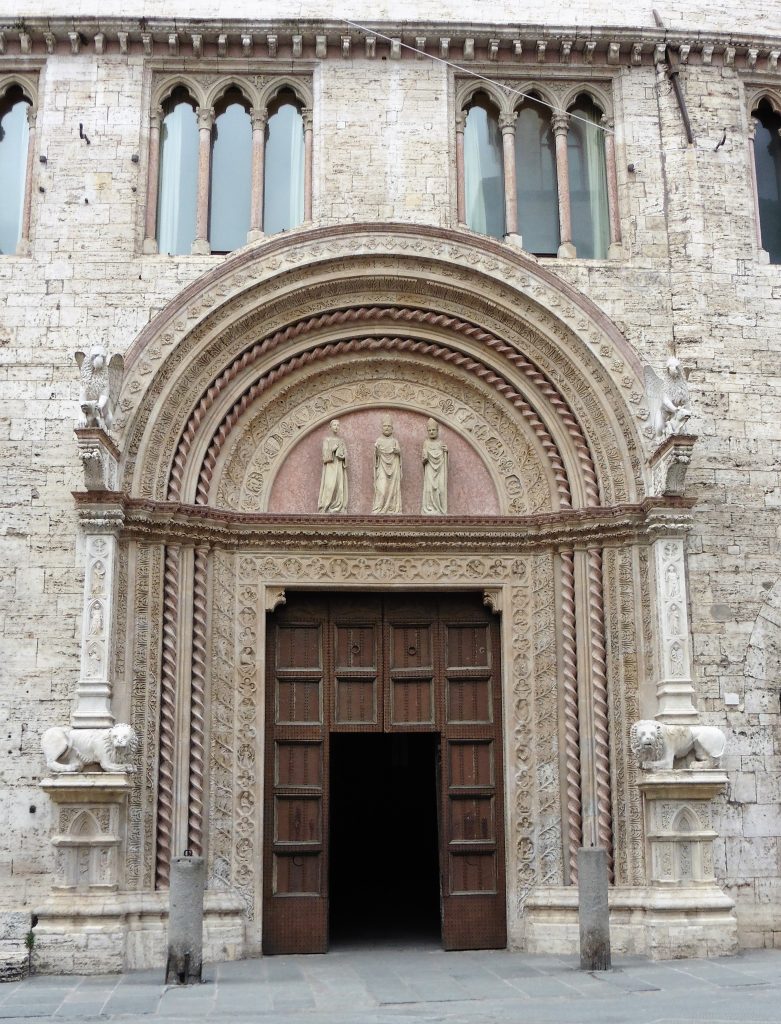 At the top of Piazza IV Novembre sits the Perugia Duomo (Cattedrale Metropolitana di San Lorenzo). It’s positioning in relation to the piazza is quite odd, for instead of the front entrance of the cathedral fronting the square it’s actually the side wall. Actually, the Duomo is an odd-looking building anyway. Originally the exterior was to be covered in pink and white marble, however, only the front facade was ever completed. That’s if you could call it completed, as the top of the facade is finished in red brick which looks kind of odd. The rest is covered in limestone.
The Duomo consists of a long single nave with two aisles under the single roof. It doesn’t have a huge bell tower and although you would never compare it to cathedrals like Milan inside it’s quite beautiful.
Inside the Duomo is quite dark due to the high windows of the Gothic design. Much of the interior such as the columns which support the roof and separate the aisles are plastered. They’re covered in fake marbling, which was all the rage in the 19th century. The finish is so good that it takes a good eye to spot the real marble. The floors are decorated with different coloured marbles and the ceiling has some beautiful frescoes.
One of the columns is decorated with all shapes of silver votives, offerings to the shrine of Madonna as thanks for all sorts of personal miracles.

The sarcophagus of Pope Martin IV from 1285 is contained within the cathedral along with relics of other popes. Relic is just a fancy name for bones or body parts. In the past and still in some places relics are venerated with people believing in their supernatural powers. 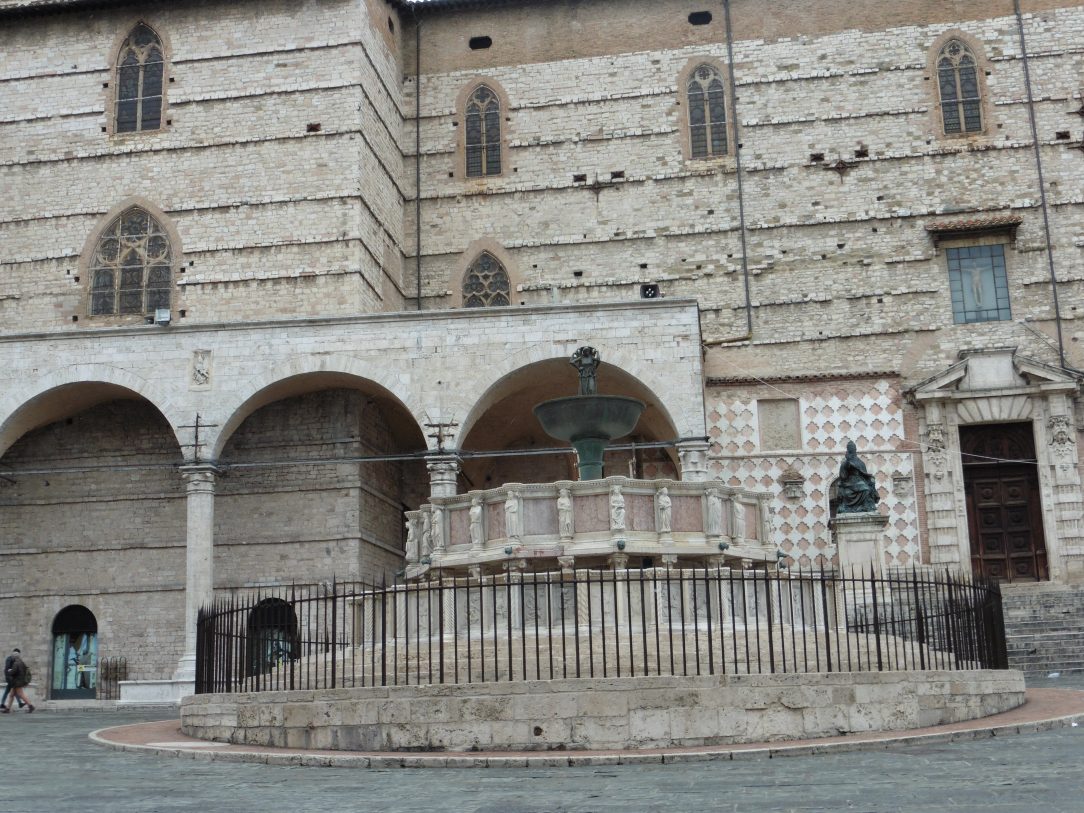 In the square beside the Duomo is Fontana Maggiore, a marble fountain built by Nicola and Giovanni Pisano in 1278. Around its 25 sides it features carvings of bible scenes from Genesis, zodiac signs and Roman history.
On the other side of the square is the Sala Dei Notari (Hall of Notaries). It’s part of the Palazzo dei Priori and features a bronze lion and a griffin over the entry. Inside the hall is decorated with elaborate frescoes featuring coats of arms of the famous Perugian families. In the heart of the old city is Chiesa di San Filippo Neri a 17th-century church built with a beautiful limestone facade.
Six chapels line the nave with triumphal arches decorated with frescoes.
In one of the chapels, we spotted art piece boxes by artist Umberto Peugello. Each face of the cubes are painted with different parts of the six seasons of the Christian calendar. When they are put together they form the whole and can be turned to make different scenes. Currently, the cubes form the picture of the visit by the three kings. It’s an interesting art piece which reminds us of picture blocks our kids had when they were little. The church is quite dark inside with squarish windows at the top of the church the only natural form of light.
Within the Votive chapel frescoes decorate the vaulted ceiling along with various silver votives. Chiesa di San Filippo Neri supposedly is one of the most important churches of Perugia. 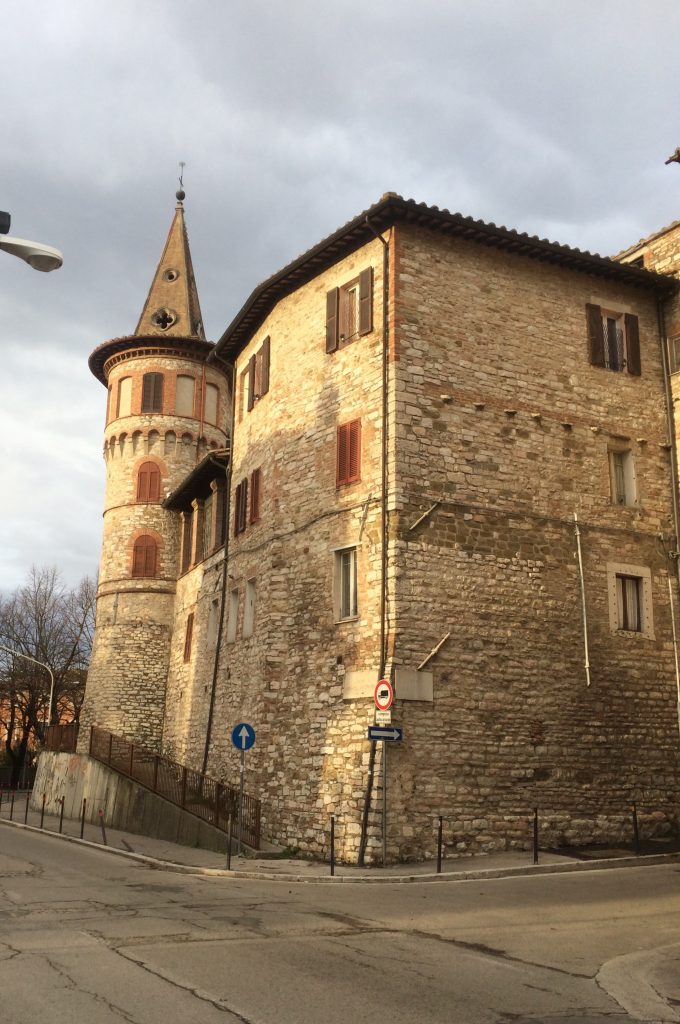 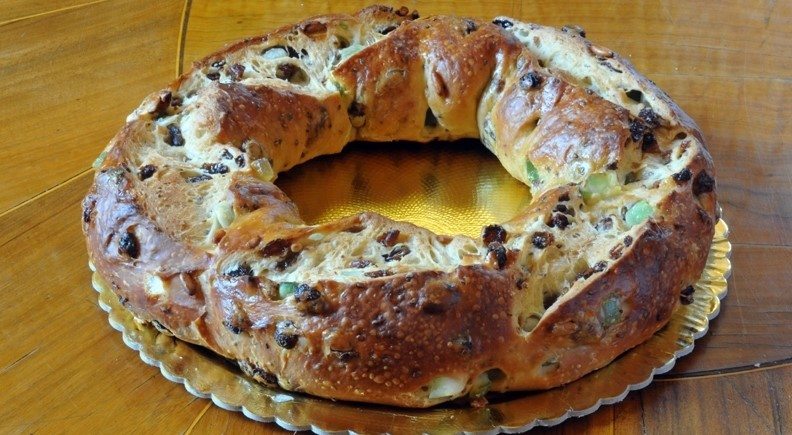 Perugia’s famous for its chocolate Baci and a chocolate coffee mix much like the one we had in Milan. However, a lesser known favourite is Torcolo Perugna Di San Costanzo. It’s a spiced bun with raisins formed in a ring. It may be the inspiration for the “bunt”, but either way, it is delicious. Not to normal light bun we are used to but quite heavy and full of fruit. 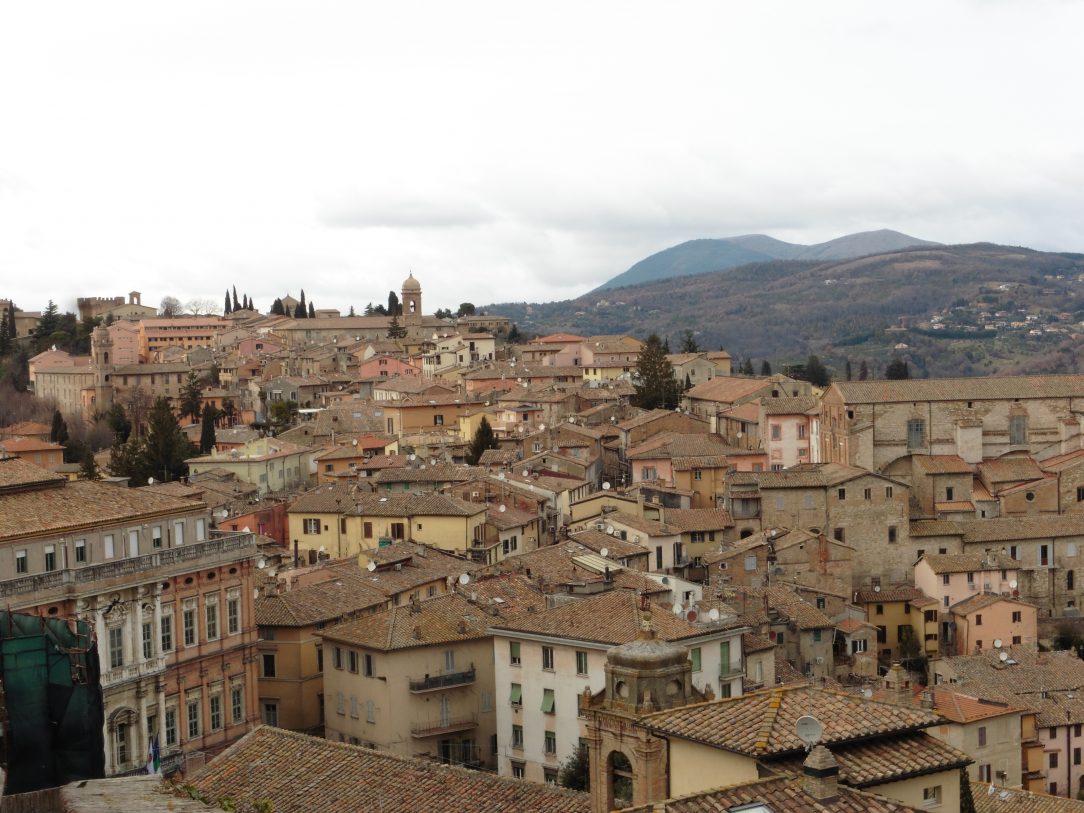 A map showing a self guided tour of Perugia is available from the Tourist Office which corresponds with signposts around the city. It’s quite easy to follow and guides you through lots of tiny cobbled streets. It’s a lovely walk which takes in historic buildings and churches. Along the wa,y there are lots of fabulous views across the city. We really loved our time in Perugia even the little bit of snow we had each day. From Perugi,a we head to Rome which we are really looking forward to.

2 thoughts on “Walking The Streets Of Perugia”