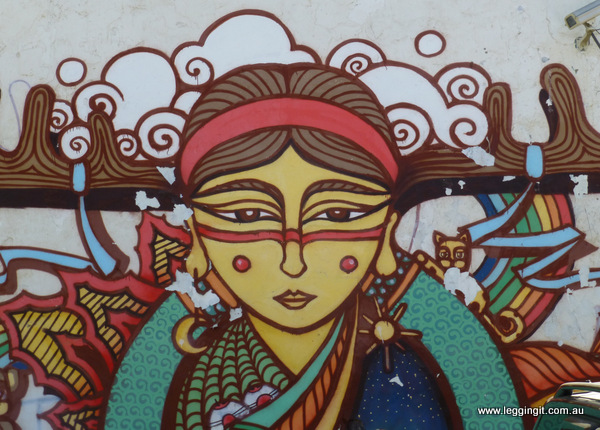 Today was our last day in Ulaan Bator as we were leaving to catch the train to Irkutsk.  We started the day with a walk to the Wedding Palace in Ulaan Bator. The weather was beautiful but when we got there, no one getting married. We had a look around the grounds. In the front of the yard is a Ger with an ornate door and the main building is a large white building quite stylised with a lovely foyer area and a beautiful staircase which would make perfect photos. Heaps of Mongolians in UB head to the wedding palace for their weddings so it is really busy especially in summer.

We continued walking, ordered an early lunch at the French bakery, only to have the power cut out so after a rethink coke and filled rolls had to be our order. We then took a slow wander back to the hostel, tried to change our Mongolian Tughrik to Roubles but with no luck. For some bizarre reason they would only change them to US Dollars??

Back at the hostel we said our goodbyes to Doljmaa and her husband dropped us at the station. We sat on the platform as the train pulled in, staff boarded and there seemed to be a lot of people hanging around with Hong Kong Shopping bags absolutely packed but we thought nothing of it.

When we finally boarded the train the fun started. As we entered our cabin there were two blokes and a lady there, strange as there are only four beds. All the beds were covered in new clothes still in their bags and tied with string. The lady tapped the top bunk and pointed to herself. Then the older bloke started saying that our bunks were top bunks and we had to stow our bags in the space above the door. He pulled the step out and was telling me to climb the ladder onto the top bunk and he really started giving me the shits.

The conductor was coming through so I spoke to her and she indicated that we had both bottom bunks so I grabbed my bag and started to put it under the bottom bunk. The bloke was really getting up my nose saying our bags had to go up the top……..that’s when I lost it. Under the bunk there is a storage area and it was packed full of clothes so I told him to get it all out from under our bunks and stick it up the top and put our bags under the bunk. Then I told him to get all his shit off our beds. The two blokes quickly split the scene.

Unbeknown to us we’d stumbled into a clothes smuggling operation and as the journey wore on we became aware the whole carriage and a few beyond were involved. The lady in the top bunk returned and with the other ladies in the carriage were furiously redistributing clothing. We were laughing as she removed 7 jackets from a bag and carefully hung them on the coat hooks so that they looked like only a few. All through the carriage was the sound of rustling plastic as shirts and pants were removed from their bags to be concealed within the carriage. Very quickly the bin was overflowing with clothing bags. Women and men were scurrying back and forth with bundles of clothes it was like a clothes shop. Apparently the clothing smugglers book a bed with unwitting travellers and then try and heavy them to conceal or carry stuff for them, as you can imagine this was not going to happen to us.

As we approached the border around 10 o’clock we had ladies trying to give us handbags and different things. Our cabin mate returned with yet more goods an d started hiding them on the top bunks, under bedding and wherever she could fit them. She then started opening things and trying to put them unsuccessfully in our beds.

The Mongolian border was pretty straightforward we gave them our paperwork and passports, however they wanted to know what currency and amounts we were carrying. Then to top that off the customs lady gave Michele’s form to the smuggler but I never saw my form again. Immigration came through the train checked for people and the smuggler noticed some clothes hidden under the bed that she’d forgotten to hide so the redistribution started again, people running up and down the carriage, plastic bags flying as the y opened everything trying to make it look like used clothing.

As we approached the Russian border she was still pushing clothes into her pillow and under her bedding. The funniest thing for us was the sudden appearance of about ten huge Salamis that were carefully hung to hide even more clothes.

Russian Immigration boarded the train around midnight and there were heaps of them with dogs and searchers looking for people being smuggled across the border. The Immigration Officer made a point of slowly and deliberately checking us out. Customs came on and they made me open my bags, then checked a few shopping bags which the smuggler had placed close to the door but at no time did the customs officer actually do a proper search. With all the officers on board it was an absolute joke. The bins were overflowing with clothes bags, there were enough jackets hanging up to keep the Swiss Army warm in winter, but no one made the connection and no one did a proper search. Basically everyone knew what was going on train staff included but no one said a thing.

As the customs officers were departing the smugglers were busy redistributing their goods , we slept with one eye open in case someone wanted to relieve us of a bit of our spending money as the weary smuggler was no longer sleepy but busy as a one legged arse kicker. People throughout the carriage were returning all sorts of things to her and other things being sent off to other people along the train.

We woke reasonable early and watched people getting off at different points with their booty, the local markets will be busy on the weekend with all the new stock.

On the serious side we are lucky Michele had read a bit about this and we knew not to get involved, had it all gone pear-shaped we could have ended up in a jail cell somewhere for something we had nothing to do with.