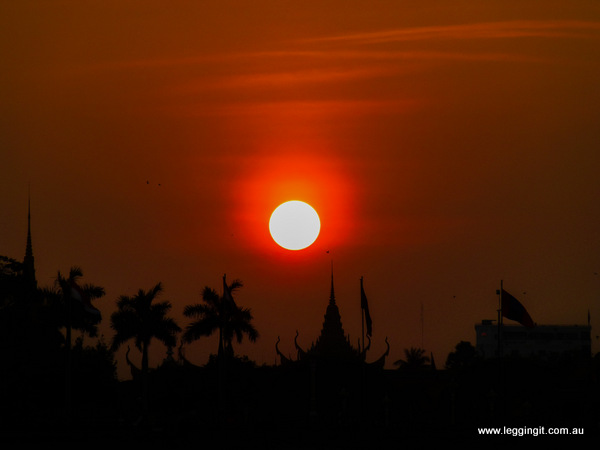 After a little lay in we boarded Phnom Penh Sally and headed off towards the tourist strip. Things were going great for a while until we realised we were going around in circles and were no where near where we were supposed to be. We got google maps up and soon were back on track.

We tried our cards at the bank and soon realised that they weren’t active. So all the legwork we did before leaving home was useless, we gave the bank loose plans and now we were in Cambodia without access to our money. We couldn’t ring the overseas number, and the emails we’ve sent are yet to be replied to. We had to change some of our emergency money which means that we’re now two days into our emergency money and with the bank not answering emails and us not being able to access the overseas number things will be getting grim soon.

We found our way to the riverfront and had breakfast at the Royal Cambodian Hotel. We had an English breakfast with poached eggs, bacon, tomatoes, a really tasty homemade hash brown and coffee. We headed off back to the bike-shop to organise our visas for Vietnam and China. We spoke to the Boss of the shop and for US$60 each he’d organise a China visa and for US$62 each he’d organise a Vietnam visa. After our previous experiences, we looked at what we’d have to pay and time we’d have to waste waiting to get it and just paid the money. They will be ready on Tuesday so we can head off after that.

We then decided to go for a little trip along the river and eventually ended up near where the bus was washed when we arrived, about 16 kms out of town. We stopped for a drink and when we returned home google maps showed us a shortcut, hmmmmm, There was a little bit of road between the potholes but not much, it was like a lunar landscape. Now I’ve driven on some bad roads in my time but there is nothing that compares to Road number1, and it’s only 15 kms from the city. No wonder there’s tyre repair shops every kilometre or so. It sure takes a lot of concentration to pick the best line trying to miss all the potholes, watch the oncoming traffic and those coming up behind.

We followed road number one for a while skirting around the edge of the city through the rural areas until we soon were getting close to the hotel. There were areas under repair and a few sections where they’d laid single lanes of concrete, and the funniest part was a toll road which was absolutely trashed with little or no bitumen, just road base and potholes. Shops along the side of the road had hoses running to eliminate the dust but it just aided in creating potholes.

The rough road sure made us saddle sore and with only 4.5 kms to go we decided to stop and have a drink and relax, before continuing back to the hotel where we negotiated a discount for our continued stay. They thought we had checked out yesterday 🙂 that might explain why the room wasn’t serviced. We managed to get the room for $18 US a night which is ok. We immediately hit the pool aaaah it was really nice.

We met up again with our Swiss friends for a sunset tour of the river which was a lovely way to end the day. Phnom Penh is at the meeting point of three rivers the Tonlé Sap, Bassat and Mekong River so there’s lots of water transport throughout the country and to neighbouring countries.

After sunset we ate at a nice Thai restaurant before heading to another place for desert and relived old times with a game of “Skipbo”. A young local boy of about 4 who was selling postcards on the street, was quite fascinated with us playing cards and was counting the cards, pointing out cards that were the same. He was really sharp.

It was disgusting to see a young local girl, who had came past selling books and arm bands, groped by an old guy of about 60 as he passed her further up the street. We wonder how these vulnerable kids will survive with these creeps wandering the streets.

We said goodbye to our friends and Bon Voyage hope to see them again during our travels. We then headed home on “Sally” with google maps navigating funny it was only a 10 minute trip. lol