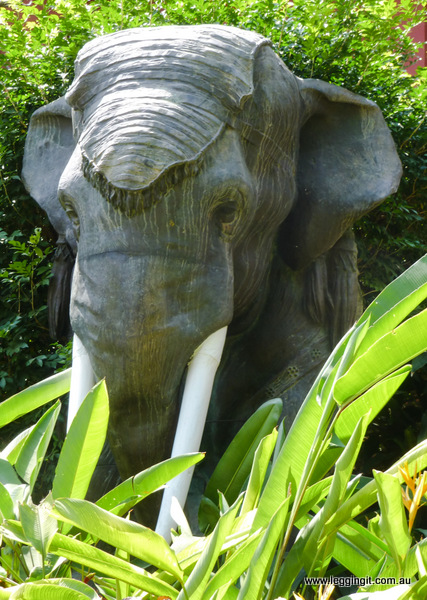 There’s nothing nicer than a relaxing swim before breakfast but when we hit the pool we found a few local kids swimming. They were pretty friendly and were readily impressed with our swimming abilities. So I gave them an impromptu swimming lesson, teaching them the basics of breaststroke and freestyle. They were keen learners watching the way I swam and trying to repeat it. It was good fun.

After a disappointing breakfast yesterday we decided to have a break and had breakfast at Costa Coffee, a nice two storey cafe over looking the river on one side and the royal palace on the other. There was a crowd of people making lots of noise on the riverfront across the road and we were unsure whether it was a protest or not. We noticed about twenty helmeted Policemen turn up on Motorbikes wearing special uniforms and wondered whether they were riot police or not. A large procession of limousines pulled out of the Royal Palace and we then knew the reason for the large police presence.

After breakfast we visited the National Museum. The National Museum only cost US$2 and we started our tour by looking at some great local woven cloth which is used in temples. The silk thread is meticulously planned and dyed so that as it is weaved it creates a pattern. Some of the cloth is so intricate, and we contemplated how they were planned woven and dyed its just an amazing process.

The museum was full of statues from all over the country, carved items, weaving looms and metal objects. There were lots of Buddhas and ladies pushing floral tributes in our faces to leave for the buddhas and after about four we just started saying “No thanks”.

There were other areas which tell the tale of grave robbery by the desperately poor population and the sale of items belonging to the ancient people from a time before Angkor Wat. We relaxed with a drink in the nice gardens in the courtyard of the museum before heading back to the bike.

After another relaxing drink at “The Riverfront” restaurant we cruised around for a while before stopping at a local Chinese restaurant for lunch. We parked the bike next to two big trays of fish drying in the sun out the front. Michele ordered Pork and Rice and I Beef Lok Lak which were pretty cheap (about $5) and quite delicious.

After lunch we returned to the hotel for a swim and when we hit the pool we found two local boys swimming. They were also pretty friendly and were impressed as well with our swimming abilities. So I also gave them an impromptu swimming lesson, teaching them the basics of breaststroke and freestyle just like the boys in the morning. I was starting to feel like Laurie Lawrence.

A bit worn out after sightseeing and swimming we decided on something different and had a movie night at The Flicks. The Flicks is a little independent cinema run by a couple of expats, that Michele had discovered through Helpex. So basically you can volunteer there and they provide food and accommodation. The interior of the cinema is wicker lounges up the top two levels and large cushions/mattresses on the bottom two levels. The cost of the cinema is US$3.50 and that entitles you to watch all the movies on that day(not a bad deal). We went to watch 12years a Slave, but arrived early to catch an English movie called “Selfish Giant” a story about kids working Rag and Bone around Bradford, England. We had plans to have dinner at the beautiful Guesthouse next door, but stayed for the third movie ” Sunshine on Leith”(a musical about two scottish soldiers returning from Afghanistan, and it included some of the Proclaimers music)

We ordered some movie food of burger and chips instead. All up we spent from 4pm until about 10.30 just chilling and was a great way to unwind after a few hectic days. The cruise home was pretty nice until we hit the traffic snarl where they’re constructing the flyover outside the hotel.