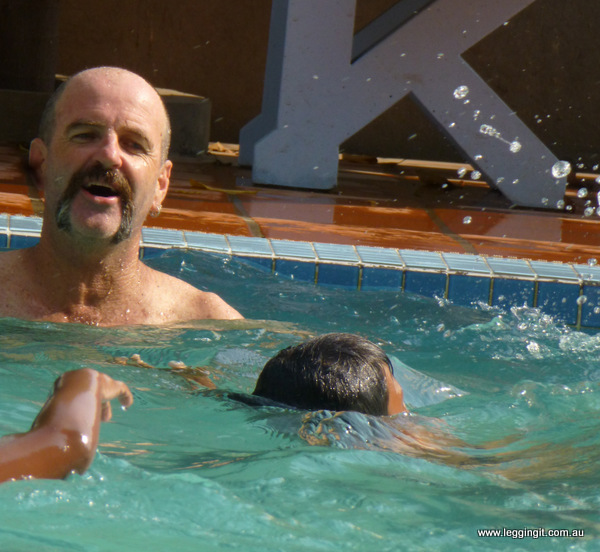 Breakfast of Croissants, pastries and good coffee, this morning at Tour Le Jours. There’s nothing better than fresh croissants and vegemite….yum. We met an American guy who quickly told us his life story, and his conspiracy theories. He was a nice guy, a bit like some of the guys we’ve run across on past trips who just don’t “fit in”and end up in Asia.

After breakfast we headed into the city looking for Sorya Shopping centre. As usual the traffic was horrendous and we of course couldn’t find the shopping centre. As we were riding down the street, out stepped the police waving us over. They started saying that we were riding the wrong way down a one way street, even though as we were talking someone rode past on the opposite side of the road gutter. We pointed this out and their explanation was that its ok to ride on the gutter, or footpath. It was just ludicrous. They looked at my licence and once again after looking through the pages in all different languages without getting to the page with my photo or details gave it back. I argued the toss but eventually cut to the chase made the thumb forefinger sign and asked how much? They wanted $10 but I said $5 and after passing over a fiver we were on our way and they even pointed the way to the shopping centre.

We found the shopping centre eventually and had a look around it was pretty disappointing, however seeing the sign with a “no hand grenades” symbol on it was a crack up. We were thinking where do you leave your hand grenades? Is there a pile near the front door? How do you stop from getting your hand grenades mixed up? Do you write your name on your hand grenade?

We left the shopping centre and i looked at the road yep two lanes and as we crossed the intersection more police stepped out, what the…… I was really pissed off with the weak arse excuse he gave me that we were once again going the wrong way up a one way street, I pointed to the Tuk Tuk just up the road and said “what about that guy”. The policeman didn’t bother with the licence, he just told the truth ” money for beer, $5″ I was angry as I started pulling dollar bills out as I only had 4 one dollar notes he gave us a break and accepted 4. He was grinning at me as I was telling what a pitiful human being he was, and a few other things.

We found a nice restaurant for lunch called Karma, which hopefully will be visited on these parasites. It was a nice little restaurant and we enjoyed baguettes, Club Sandwiches, with Vietnamese coffee and fruit shakes.
The trip back to the motel was pretty quiet with both of us watching for police, and riding within packs of motorbikes and cars to “blend in”.

Another trip to the pool found the it teaming with about 15 local kids and once again I was teaching the locals how to swim. They were great kids. They loved showing off with back flips into the pool and there were kids of all ages and sizes. After mixing with all the corruption this morning it was great mixing with the local people and maybe getting a little hope for the future of this country.