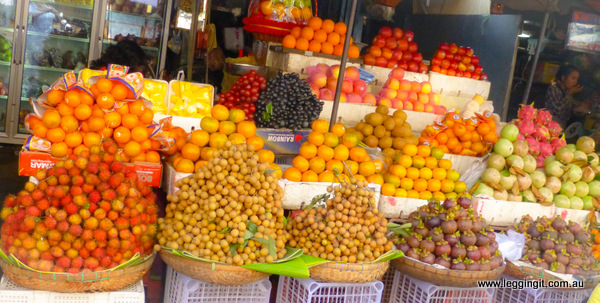 Our mission today was to organise some transport so we did not have to keep getting tuk tuks…so a motor bike rental shop needed to be tracked down.

We were woken this morning to the sound of squeaking brakes . We looked out the window at hundreds of vehicles below in the peak hour rush, bicycles carrying big bunches of balloons, food vendors with their stalls attached to their motorcycles. Suddenly we heard drums and cymbals to look out again to see some Chinese dragon dancers and their band warming up for a busy days work ( we saw them a few times during the day blessing different businesses). There are road works outside our hotel so the traffic is really congested but not overly noisy so it isn’t a bother.

Our objective for the day was to unwind so we sat around the pool, swimming, playing cards for most of the morning. The kids next door were hiding in the upstairs room and talking to us and everytime we looked noone was there. They played this game for ages and it reminded us of when we were kids playing similar games. Eventually the two tricksters showed their faces and we said hello.

We caught a Tuk Tuk into the riverfront area and walked along past the expat hotels amazing at the amount of bars full of men sitting alone at tables and for some reason it felt sleazy. We found a really nice restaurant where were shared a seafood platter for two, full of tuna, salmon, calamari, prawns, battered fish and of course chips. It was a great meal with everything cooked to perfection and beautifully arranged. We spent the rest of the afternoon there kicking back drinking coffee, playing cards and their amazing iced coffees before looking for a motorbike hire shop.

We wandered around looking for the numbered address and were about to give up when we stumbled across a motorbike hire place. We had to surrender our passport (which is typical here) and after discussion how we needed it to get our visa the guy called someone who organises visas. Pretty soon we were climbing aboard a little Honda Airblade we christened “Phnom Pehn Sally” and making the trek home through traffic that was unbelievable. We were soon riding like the locals however, going the wrong way against the flow of traffic, riding over footpaths to get ahead of the traffic and doing whatever it took to get where we were going.

We got a bit off track going back to the hotel but with the help of google maps we soon were back on track and parked the bike in the foyer of the hotel.lol Very handy We had to dodge traffic as we headed out for tea. In Cambodia wherever there’s footpaths they’re usually full of parked cars and bikes so the only way to get through is walk on the road, and that’s probably why except in rural areas nobody walks. We walked around looking for the shopping centre but we eventually gave up and retraced our steps to a little local restaurant. The food was pretty good Michele had fried rice, and I pork with noodles. There were about twenty other local people there enjoying steamboat and it was nice being the local celebrities.

Tomorrow we have to get our Chinese visas underway.