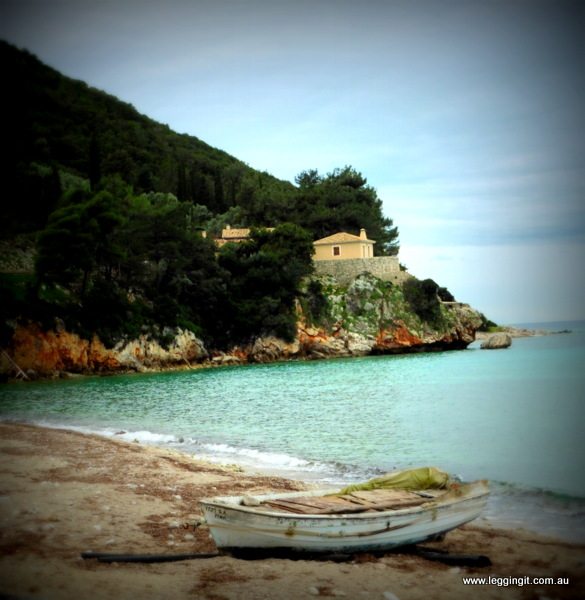 Waking up to rain falling on the roof we walked down to the local cafe for breakfast. Today we’re planning to ride around the island of Lefkada so all we have to do is wait out the rain. As predicted the rain eased around 10 o’clock so we headed out of Nikiana and into Lefkada. The roads were still covered in confetti and streamers which the rain had turned to a technicolor mush. Unlike Rijecka Carnival in Croatia, there were no early morning clean up crews here. 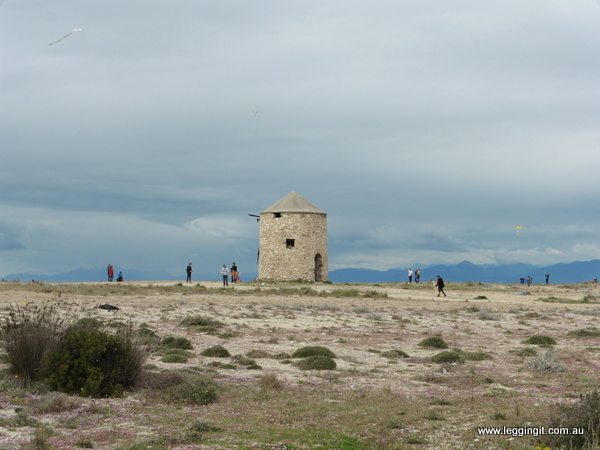 Passing through Lefkada we headed around the lagoon which is surrounded on one side by the causeway and on the seaside by a long strip of sand dunes. It seemed today must be kite flying day, as we passed a few kite sellers on our way through the town. On the thin strip of land a number of old windmills stood silent indicating that this must be the best place to catch the breeze and lines of cars thronged the edge of the nearby roadway. Around the windmills along the sand dunes dozens of hexagonal kites fluttered in the breeze. The hexagonal shape must be a local thing and they were decorated with all sorts of designs. All the cafe’s around Lefkada and along the beachfront were full so it seems that because today was a public holiday people were making the most of it.
Heading back through the edge of Lefkada we spotted the road to take us to the other side of the island. The road was pretty steep winding back and forth up the hill through lots of housing before a long climb towards a monastery. After that the road levelled out and it took us through a few villages of the standard two story houses with a vege patch in the front yard surrounded by olive groves. The road petered out to a mixed bag of surfaces and widths which left us wondering how often some sections of the road are used.

As we descended to the coast we encountered some new section of road that had obviously been affected by the recent storms. Multiple landslides had flattened the landslide barriers and spilled onto the road. There’d been a lot of clean up and it was obviously still in progress as one side of the road was still covered in debris. 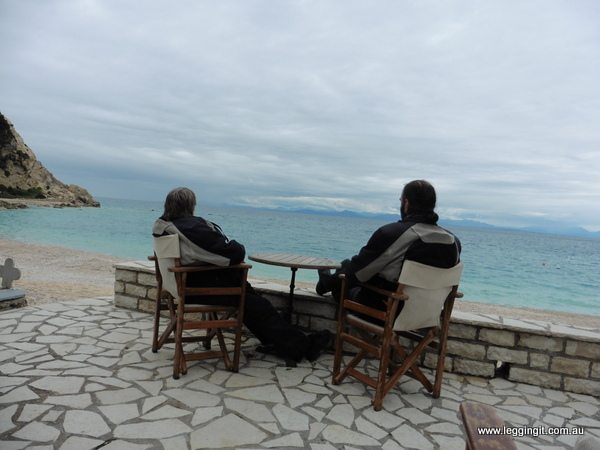 The views around the coast were magnificent so we headed into the little town and found a cafe overlooking the bay. The water was unbelievably green and in the distance the storm clouds framed islands with such colours that they looked like they leapt from the paper of an ancient Japanese painting. With the noise of the waves crashing on the shore before draining through the shingle it really was a magical experience. 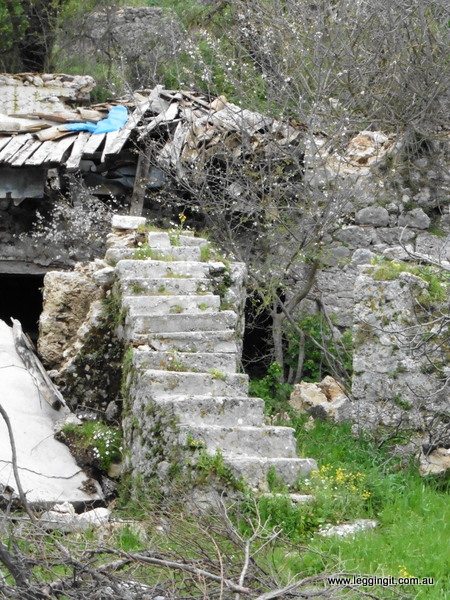 After a coffee we headed on towards Vasiliki but turned off near Komilio and headed down through Dragano. This part of the island looks extra sleepy with just the occasional tourist hotel. Along the road there was lots more evidence of the latest storms with collapsed stone walls, undermined roads and huge gaping cracks in the asphalt. The upside was there was hardly any traffic and just the occasional flock of sheep. Around this part of the island was incredibly beautiful. As we got closer towards Porto Katsiki much of the hills were covered in coastal scrub with lots of wildflowers just coming into bloom. 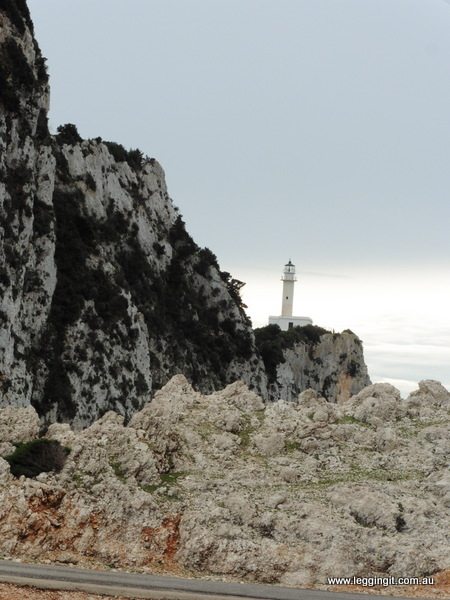 As we wound down the hills towards Lefkada lighthouse we caught a glimpse of sheer cliffs and amazed at the beauty of the landscape surrounding the bay.
Unfortunately we had to head all the way back to Komilio to pick up the road towards Vasiliki. On the way home we crossed over the mountains which ringed a huge valley with the town of fronting a long beach. We took a quick spin around town, noticing lots of tourist hotels. With the long beach and a nearby ferry port this place must go off in the summer. 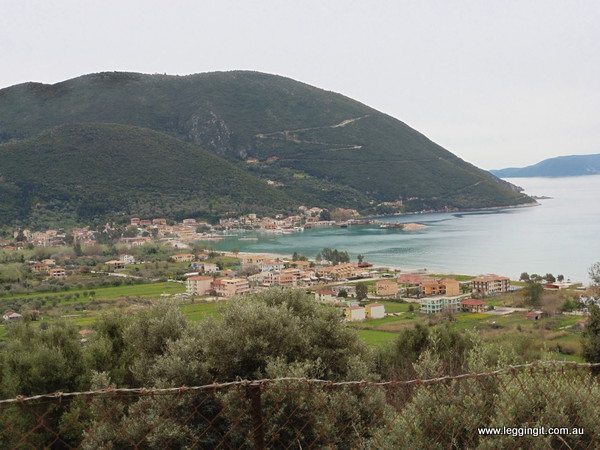 Dark clouds were getting lower and lower so we didn’t dally too long in and once again we headed up and over the hills into another town. The views were spectacular with hills surrounding the blue water of the bay and the waters almost lapping the edge of road. There were lots of tour boats tied up and even a trireme (an Ancient Greek warship) in the dock.
As the rain started to fall we made it back to Nikiana just in time. It was a great ride around Lefkada and in summer it would be perfect. Tomorrow we head to Patras, a brief stop on our way to Athens.