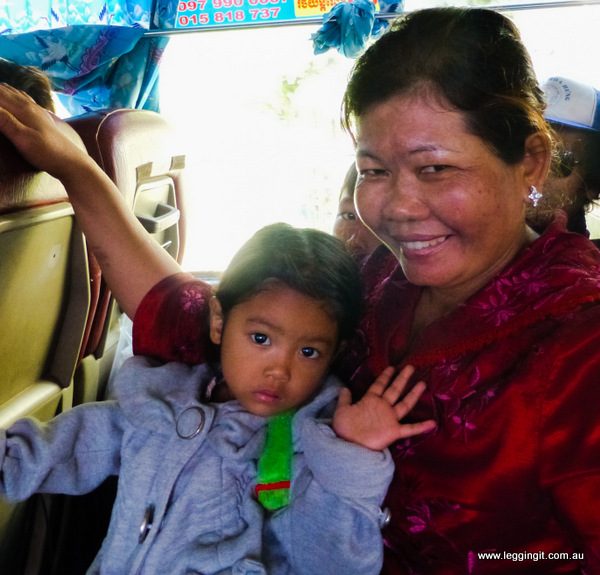 This morning we needed to get on the bus and head to Phnom Penh, it was supposed to be easy but…I really hate starting the day being mucked around, especially before I’ve had my first coffee, it really sets the tone for the day. Booking out turned out to be a real drama as we sort of expected. We had come to expect poor service at the Coconut House, (well actually no service), because the room hadn’t been serviced once during the three days we were there, and the bins were overflowing.

When we were checking out we tried to pay a $36 bill with a $100 note the girl at the front desk went into a flat spin and wouldn’t accept it because she didn’t have change. She told us to take a Tuk Tuk and get some change but wanted our passport if we were going to leave the grounds. I left Michele there and stormed off to the Cold Night restaurant just up the road who quite happily changed the note for me. The girl was all smiles when I came back with change, however I was not.

We were dropped off by Chantha our Tuk Tuk driver about 1/2 an hour early for the bus, and as we hadn’t eaten breakfast looked for something to eat. There were plenty of local cuisine and baguettes for sale but not much to put on them. There were two hands of bananas that different ladies were selling but they demanded premium prices for pretty low grade hands, so I told them they were joking. Michele settled for dry bread but I had a can of Bully Beef that Karen and Aaron had given me so I opened it up and filled my baguette up.

The bus arrived about 9 but when we boarded there was a fight over our seat. Someone else was in it, they wanted to put us in the back seat but we weren’t having none of that. So they said there’d be another bus in 10 minutes so we grabbed our gear and got off. It was absolutely scorching waiting for the next bus and we tried to keep out of the sun as best we could. A baby of a young mum near us wasn’t handling the heat either and she was screaming her head off. All the older ladies all chipped in and pretty soon they had bottles of water out and were giving the baby a cooling wash. It was great to see them all bonding together and the baby certainly enjoyed it and very soon was happily laughing.

The next bus arrived close to 10 o’clock and once again we had trouble as someone was in our seats. We found some empty seats and sat down hoping they were vacant and the owners didn’t turn up. Obviously these stuff ups were usual practice for the company as we could hear a lady going off her head up the front of the bus, that someone was in her seat.The guy in front of us spoke good English, overheard me commenting to Michele about what was going on and asked “You understand Khmer” to which I replied “No, I understand angry” lol

Then the owners of the seats we were sitting in showed up. The driver intervened and after shuffling people around different seats, most people were happily seated. The rest were standing in the aisle. Then the drivers offsider whom I named the Smiling Assassin, broke out the tiny plastic stools for people in the aisle to sit on.

The most horrendous Khmer radio station was blaring out of the speakers so we both donned our earphones and turned our own music up loud. Lee Kernaghan, Cold Chisel and Screaming Jets for me and I heard Michele singing ABBA at one stage, as did everyone around us(oops was she supposed to be singing in her head) lol

The road to Phnom Penh was unbelievable, with only a single lane each way, huge potholes and huge streams of traffic. The bus driver looked for gaps to overtake at every opportunity and alternated between accelerator, horn, brake in no particular order. Adding to the traffic were all sorts of vehicles from Walking tractors piled high with produce and people doing about 30 kph, to motorbikes towing trailers and homemade trucks.As we headed along every now and then the bus would come to a screaming halt a passenger would embark and a plastic chair would be passed forward.

Our first stop was a big dust bowl which was a bus park with a bustling central stalls area which was covered and had seating. They were selling all sorts of snacks, drinks and food. There were hundreds of people from different buses and as men got off the buses they all found trees to piddle on just like dogs, maybe they’d seen the toilets.

As the bus was now empty we decided to count the passengers as they got on the bus 54 adults and 17 kids in a 45 seat bus. One again it reminded us of teenage years trying to fit the maximum amount of people in the back seat of a friends car.

The rest of the run to Phnom Penh was pretty monotonous passing through rural areas with rice paddies and cows grazing, picking up or dropping off a passenger or two. The houses were pretty much the same as everywhere else with a mixture of timber, tin or Atap houses on stilts with the occasional two storey brick house (usually with bags and bags of rice stored underneath)
Just before we reached the city,16 kms out, we had another stop to wash the bus. All the company’s buses must come through this depot as there were two other buses being washed. Pretty soon the buses exterior was clean, although the interior was filthy as people just drop rubbish on the floor, and everyone boarded the bus with their bags of banana chips and steamed eggs.

On arrival in Phnom Penh we were surprised to see a motorcycle being unloaded our of the hold of the bus, which as we added up our stats 294.7 kms travelled in 7.5 hours, 54 Adults, 17 kids, 1motorbike, a bag of rice, 3 irate women, 2 sick kids and a friendly monk, all piled into a 45 seat bus.lol

We had arranged a Tuk Tuk through Chantha but as we were late he was nowhere to be seen. The hotel address was a bit confusing as the streets are numbered and the address we were looking for was 268 st 217. So was it 268, 217 street or 217, 268 street. We grabbed a Tuk Tuk showed him the address and hotel name. He said he knew where it was, then looked at the map, asked a friend, looked at the map again, asked someone else before heading off. The traffic was pretty heavy and we were warned to secure our items in the Tuk Tuk to prevent bag snatchers. We arrived at the address which of course was not the hotel. We then rang the hotel who gave the driver instructions on how to get there and we headed back the way we’d come arriving there about 30 minutes later. We gave the driver USD$6 but somehow felt we’d been taken for a ride…… in more ways than one.lol

The hotel had a nice triple room waiting and settled in before cooling off in the ground floor pool. After a shower we caught a Tuk Tuk to the Royal Palace which is situated in the centre of the tourist area which runs along the riverfront. We met up with our couchsurfing friends Karin and Aaron and dined at the Royal Hotel. Michele enjoyed some pork Tacos and I a local Khmer dish, and some crepes, with some good coffee. It was a great way to unwind after a stressful at times day.
We headed back to the hotel and to bed.