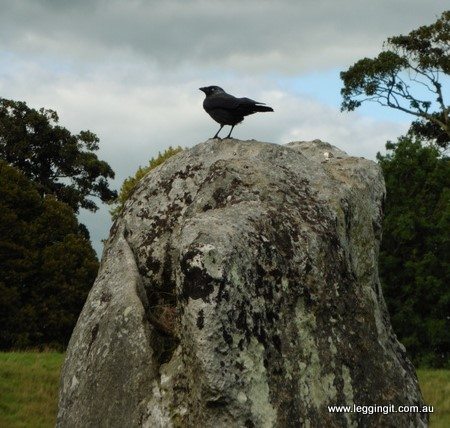 Today we took a trip up to Avebury, one of the UK’s most impressive stone circles and henge complexes. Most people have heard of Stonehenge however, Avebury is a little unknown and often overshadowed by the more popular Stonehenge. Avebury is situated about 45 km’s from Bath in an area full of Neolithic sites. 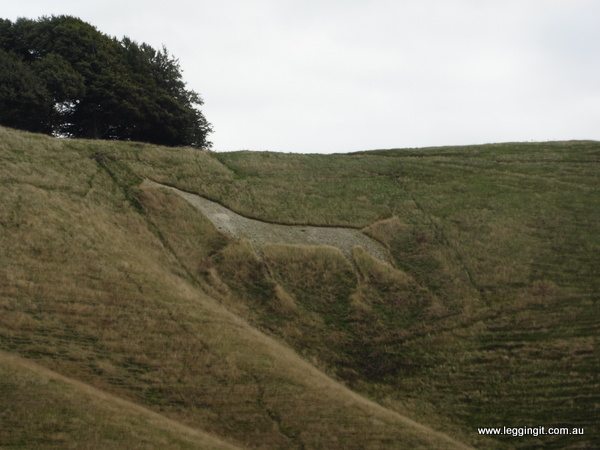 As we were riding up towards Avebury today we spotted a white horse carved into the chalk escarpment above the village of Cherhill. We were a little excited and surprised as we weren’t expecting to see a chalk horse in this location. It wasn’t the Bronze Age Uffington White Horse, however that we’d first expected but one dating from 1780. 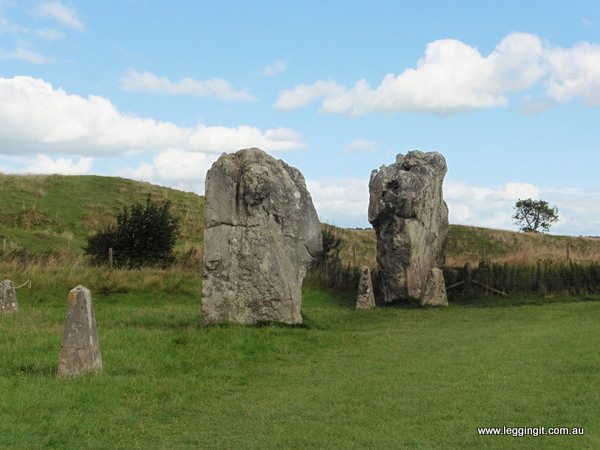 The site at Avebury is managed by the National Trust with a pay car park however unlike Stonehenge, access to the stones is free. You can even go up and actually touch the stones, if you want.
Through the middle of the stones is the village of Avebury which seems a little out of place for such an important nation monument. At the nearby National Trust museum we were to learn that the Avebury Stone Circle wasn’t always important to the local people as we learnt some of the history of the area. 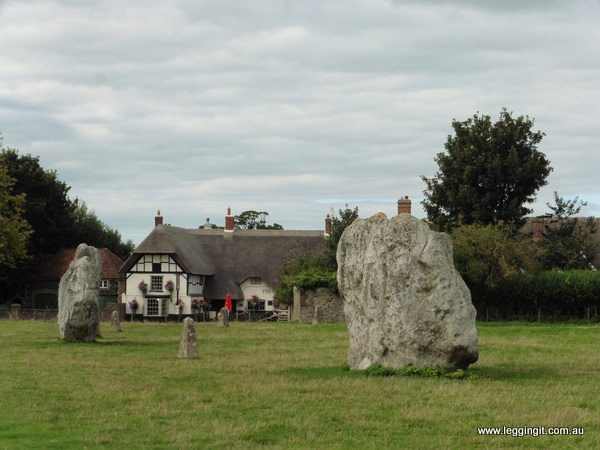 The Avebury Stone Circle dates from before the pyramids and even before Stonehenge. The reasons it was built are just pure speculation but one thing is certain, the people who built it were well organised and well fed. It would be impossible to conduct such a mammoth task otherwise. 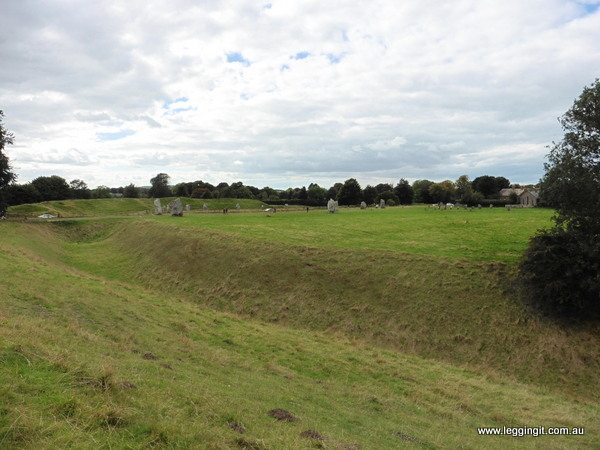 The Avebury Stone Circle is surrounded by a ditch which originally was 10 metres deep, around 15 metres wide and 1,000 metres in circumference. It’s estimated around 165,000 tons of material was removed from the ditch to built the bank which surrounds it. Using picks made from deer antlers and stone hammers to cut through the hard chalk it’s hard to imagine the enormity of the task of digging the ditch. One thing is certain however, it would’ve looked amazing with the white walls surrounding it. Another fact is there is nothing of this scale anywhere else in the world.

The outer stone circle measures 331 metres in diameter and is said to have contained around 98 Sarsen standing stones, some weighing over 40 tons.

There were originally two inner rings. The Northern one has two of the original stones still standing but the southern one lies beneath the 18th century village of Avebury which runs through the site.
One of the stones on site weighs a whopping 100 tons. Imagining the effort to cut, prepare, transport it from the quarry and erect the stone is just phenomenal. 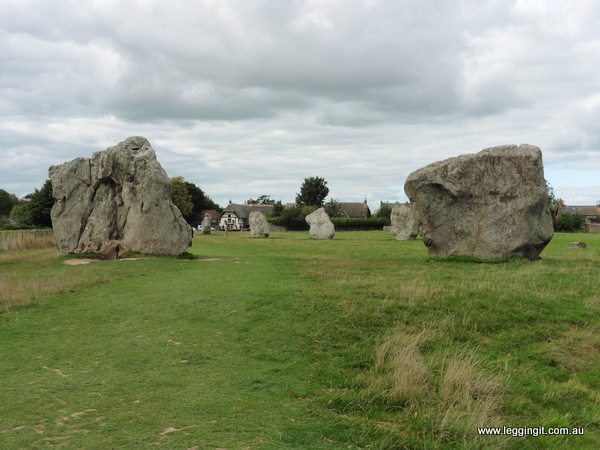 From the Avebury Stone Circle an avenue lined with paired rocks lead off to the west (West Kennet Avenue) and traces of rocks lead of to the south east (Beckhampton Avenue). In the countryside surrounding Avebury are the other Neolithic sites of the Sanctuary, Silbury Hill and West Kennet Long Barrow. It appears that these avenues were erected to connect the sites. Looking at the current stones and imagining what it was like 5,000 years ago is a little mind blowing.

During the history of the Avebury Stone Circle they weren’t always seen as a much treasured monument. During the Middle Ages they were seen as pagan and the local priest organised local people push the stones over. This came to a grinding halt when one of the locals was crushed by a falling stone. Whether they were superstitious and they were scared of devils it was enough to stop work. 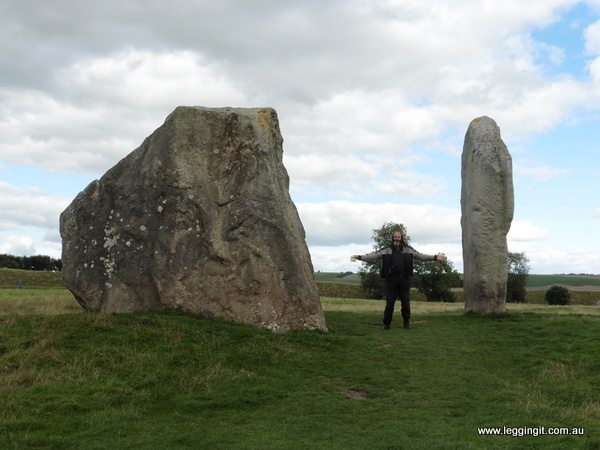 During the 17th and 18th century the pious locals were at it again this time destroying the Sarsen Stones. They devised a system to break them up by using fires to heat them up and then quickly cooling them with water. The Sarsen Stone is a type of limestone, so they were used in construction. Burning limestone also is quite dangerous as it sometimes explodes.
In 1837 the site was purchased by archaeologist and politician Sir John Lubbock in an attempt to prevent further expansion of the village .

Much of the current history of Avebury Stone Circle is due to the work of archaeologist Alexander Keiller who purchased Avebury Manor and as much of the land around Kennet Avenue in order to preserve the site. He was a keen archaeologist who set about re-erecting the surviving stones in the 1930’s. He also plotted where the missing stones originally had been. Under one stone (Barber Stone) he found the skeleton of a man with the tools of a surgeon-barber in his pockets. He also had coins from 1320 in his pocket so Alexander was able to determine his occupation and approximate year of death. 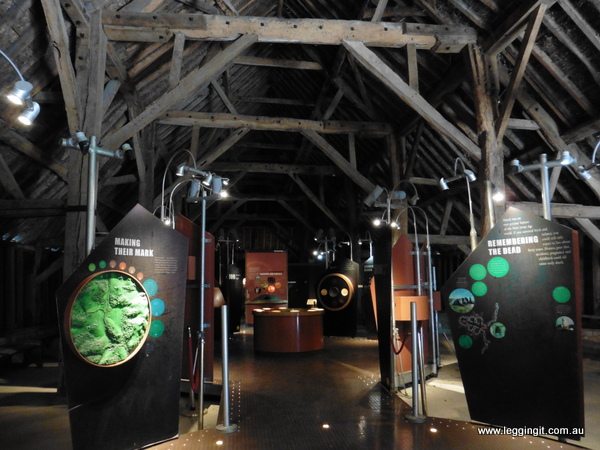 These days Avebury Manor and buildings house the Alexander Keiller Museum . Situated in the old barn which has an modern interactive display for people of all ages. It traces the history of the local area and also has a nice display featuring the life of Alexander Keiller. The old stables house the tearooms and in the gatehouse another museum houses many of the artefacts found at Avebury dating from Neolithic, Bronze Age and Anglo-Saxon times.

The Museum is £4.40 (Free for both National Trust and English Heritage members) 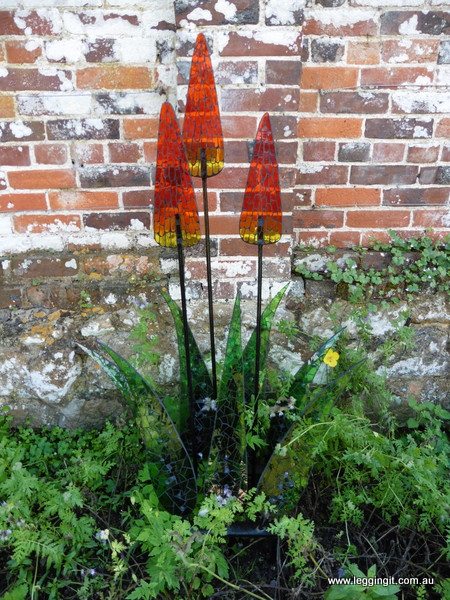 The Avebury Manor had a garden art display which included many stone sculptures and pieces built from glass and metal. It was fascinating to see how they had placed the art works interacting with the plants and buildings in the garden. 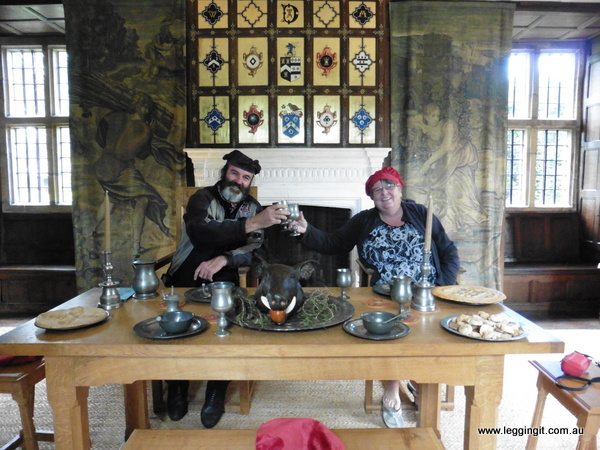 Avebury Manor was featured in the BBC series to ‘The Manor Reborn‘. In the series the house was transformed to reflect its 500 years of history. Unlike museum houses where nothing is allowed to be touched, they allowed each room to be transformed with a different theme. The effect is that each room of the house looks like it would’ve at each period. Using old designs and traditional methods the furniture and fittings were recreated so that everything is old but new. 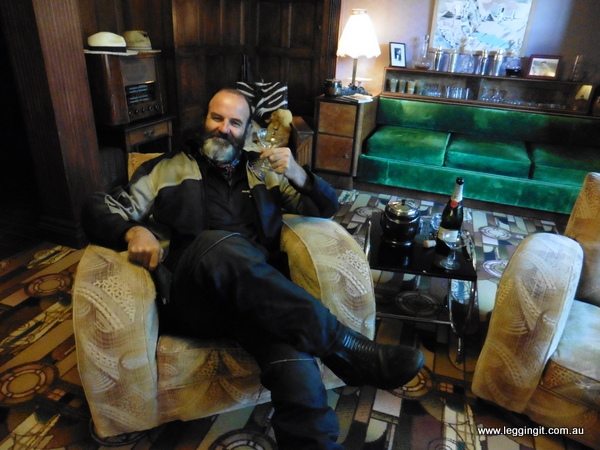 As all of the house is new we were allowed to sit on the furniture. We relaxed on the sofa in the 1930’s sitting room amongst Art Deco furniture it was like stepping back in time. Upstairs in the lovely Queen Anne’s bedroom we were told how visitors were received by the Queen using the bed like a backdrop as a sign of wealth. Around the ceiling decorative plasterwork dated back to the original installation.

Nearby the Tudor bedroom showed the various layers of material used in a mattress. There was no inner springs just layers of straw and goose down.

On the lower floor the Victorian Billiard room represents one of the more important areas of relaxation of the times. It was a real men’s retreat and I even got to snooker my opponent on the table. 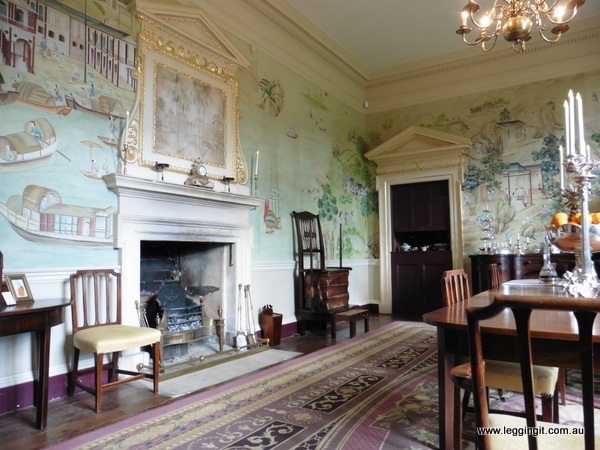 The Georgian dining room was one of my favourites. Hand painted Chinese wall paper lined the walls with Chinese scenes painted on it. It was quite exquisite and even had a little bit of England on one wall. On the dining table a pineapple, something we take for granted was pride of place. In Georgian times a sign of wealth was the display of a pineapple on a dining table. You weren’t allowed to eat it, because it was too valuable. It would be brought to the table for the meal and then put back into storage until the next meal. In Georgian England they were grown in special hothouses heated by fire or imported so they were only or the very rich indeed. Some of the architecture of the time even uses carved stone pineapples to display wealth.

Avebury Manor and Gardens are £9.50 (free for National Trust Members)

The visit to Avebury Stone Circle was quite fascinating and brought up more questions than it actually answered.
We were quite surprised as we were leaving that we had spent almost the whole day at Avebury. Time really flew.
Not far from Avebury are Sidbury Hill (a neolithic site) and Oldbury Hill both of which are Bronze Age Hill-forts. It’s quite amazing how much history is in one small area.
Riding back towards Bath we both tumbled over in our minds the questions that many people which visit Avebury Stone Circle ask, but there were no answers. If nothing else it’s one of those places worth visiting just to ask why?
Tomorrow the weather forecast is for rain so we can rest our weary brains for a day before catching up with our friend at Newark Park in a few days.

Opening hours can be found here