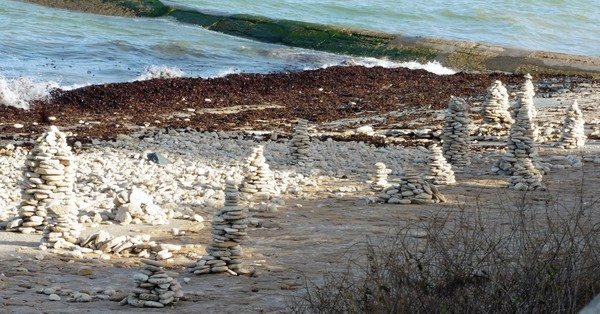 We picked the perfect winters day to visit Ile De Re. The island known as Ile De Re is France’s second biggest island after Corsica.

It’s connected to the mainland via a pay bridge which is the third longest in France.

The first thing we noticed on Ile De Re was grapevines. They’re absolutely everywhere. At this time of year they look spectacular. The leaves have all turned to lively shades of gold and the canes have taken on a rich red colour. Many of the vineyards are protected by cane grass windbreaks. 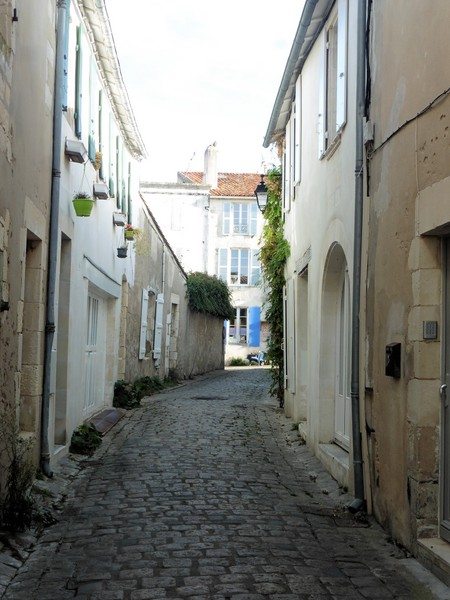 When we arrived on the island we took a ride down through Sainte Marie De Ré. It was quite interesting how Ile De Re has a real spanish feel about it. Whitewashed houses, terracotta roofs and green shutters which are not typically french at all. Many of the bungalows have the curved arches which are quite typical of spanish haciendas. It was market day and in the square a small market selling clothes, cooked chicken, vegetable and meats was in full swing. 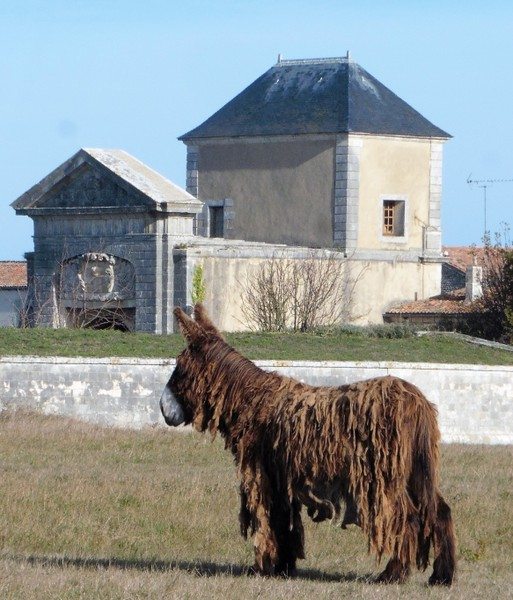 As we travelled around the island we saw the other feature of the island, donkeys. There were some of the shaggiest donkeys wed ever seen, they almost looked like they had dreadies. On Ile De Re the donkeys milk is used to create luxury bath soap. Huge stuffed toy Donkeys wearing stripey pyjamas feature outside many stores advertising it.
It was a perfect winters day and we travelled the length of the island. We discovered the island is almost divided in two. One end is covered in forests of pine trees and vineyards whilst the other is covered in marshland. The marshland is divided up into canals used for oyster and mussel farms. We travelled through the little villages to the beach at La Couarde Sur Mer. It one of the nicer beaches on the island which is sheltered from the sea. Its an area with caravan parks and holiday cottages surrounding it. In summer it must be packed with holiday makers. 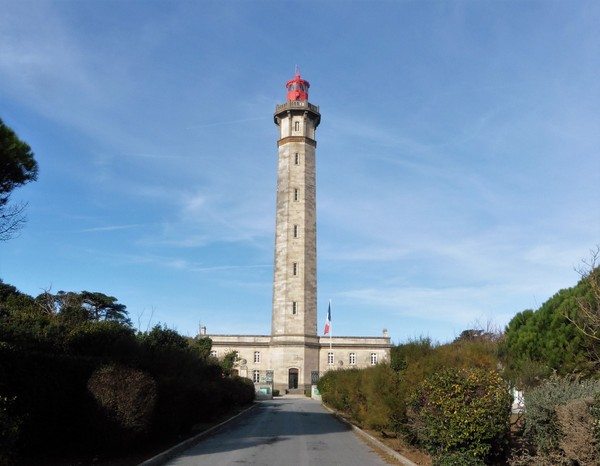 After riding to the end of the island we stopped at the lighthouse of Phare des Baleines. It seems pretty popular with visitors as there are lots of seafood restaurants, many of which were packed with patrons. There were also markets selling a great selection of souvenirs, clothes, soaps and lots of local produce.
We took a look around the lighthouse which was constructed in 1854. It was built to replace the smaller lighthouse of Tour Des Baleens which was constructed in 1682. There was a small museum there but as most things were in French the entry fee was a bit pricey. 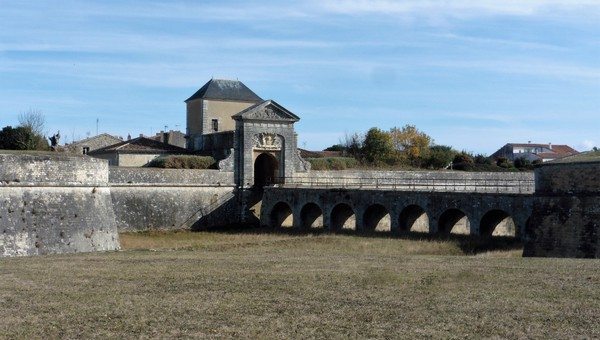 As it was close to lunch time we headed to Saint Martin De Ré where shaggy donkeys greeted us. Saint Martin De Ré became a fortified town in the 1620’s to counter the Huguenots in nearby La Rochelle. It never eventuated but in 1627 the town was besieged for three months by the English. From 1670-1702 the defences were redesigned so that the town was completely enclosed. The fort was designed so that the whole population of the island could fit inside Saint Martin De Ré. These days it’s an interesting town filled with a mixture of old stone houses, half timbered and newer houses. With cobbled streets and tree covered squares it’s lovely and quiet. However, venture away from the housing area towards the shopping district a whole new world awaits. The quaint half timbered shops sold all sorts of local crafts, soap, shoes, clothes, sweets, cakes along with designer brands. 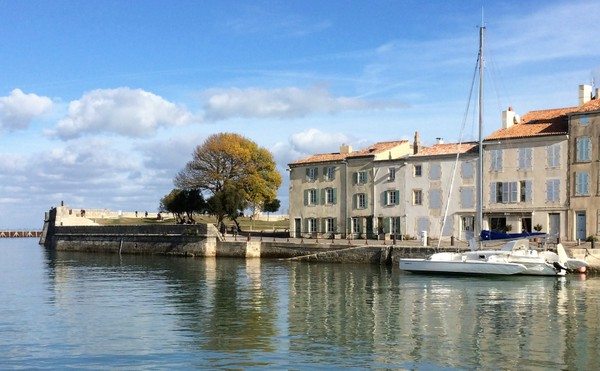 The shopping area lead to a modern marina lined with dozens of open air restaurants. Every sunny spot was covered in people drinking, eating and soaking up the sun. It was the perfect spot for lunch and a drink. 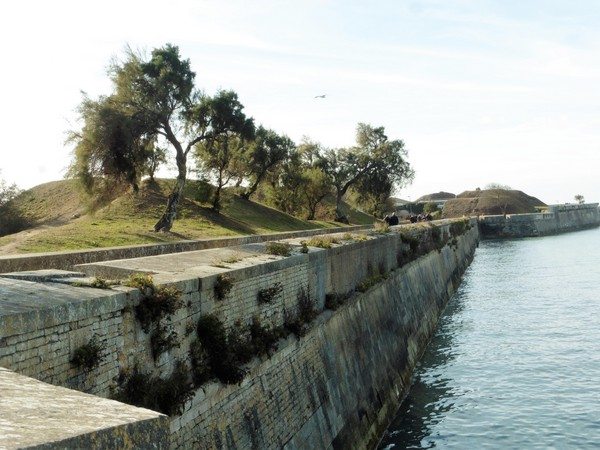 The marina is a great place to explore with old fortifications and a lovely harbour. At the marina we noticed a bust which looked very familiar to one at Busselton. We looked a little closer and sure enough it was Nicholas Baudin. He’s well known in Western Australia for his 1801 expedition to map the coast of Southern Australia. Around Western Australia their are places names after his ships Géographe and Naturaliste. Other places are named after his officers Hamelin and Leschenault. On his voyage he discovered and named over 2,500 species. Unfortunately Nicholas Baudin never made it back to France as he died on the way home, aged 49 from tuberculosis in 1803 in Mauritius.

St Martin De Ré also was the site of a prison which operated from 1873 until 1938. Prisoners were held at St Martin De Ré before being sent to New Caledonia and French Guyana. With so much history St Martin De Ré is quite a fascinating town to explore. However, so many one way streets. 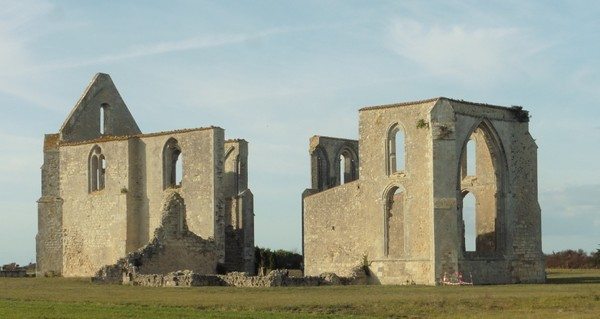 On our way back to La Rochelle we stopped off at the old Abbey of Chateliers. It was formerly a place of pilgrimage however in the 17th century it was abandoned. It was a result of the Hundred Years’ War and Wars of Religion. The abbey was quarried for stone to build the nearby fort and all that’s left today is the outside walls.
As the sun was starting to set we headed for La Rochelle. It was amazing how quiet the town was as we rode through it.  Tomorrow we’re heading into La Rochelle to explore it.