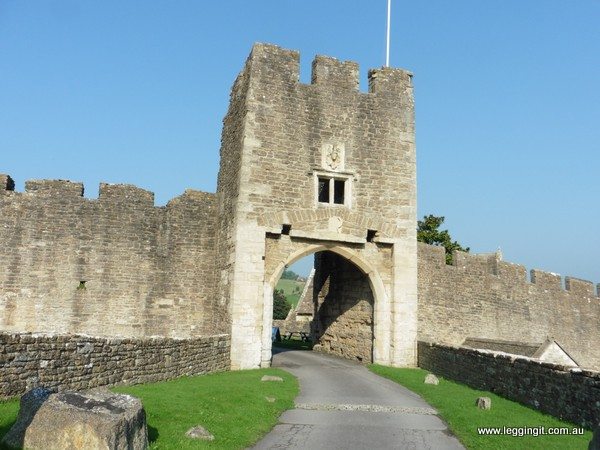 Today we visited the ruins of Farleigh Hungerford Castle, an English Heritage site not far from Bradford-on-Avon and only 9 miles from Bath.

Farleigh Hungerford Castle or Farleigh Castle as it’s also known is the former home of the Hungerford family. It’s got a fascinating history which includes murder, treason, executions and the eventual loss of the family castle.

The Castle history dates back to Thomas Hungerford who purchased the lands in 1369 and quickly decided that the manor house wasn’t befitting his status. He was steward to John of Gaunt (the kings son) a member of parliament and also the speaker of house of commons. So with access to the kings ear he was quite an influential man.

Quite understandably he decided that it was time to move up in the world and in 1377 built a Castle. Even in those days to build a Castle was impossible without the King’s permission. If the King took offence he could demand that you pull it down. However, Thomas’ penalty for not asking the king’s permission was the fine of one penny. It’s lucky he had friends in high places.

His son Walter,  was to expand the family estates and fortune by proving himself to be skilled war leader. He made a name for himself during the Hundred Years War at the battle of Agincourt and various other battles. He was knighted, made a peer, became an Admiral, Treasurer of England and was first Baron Hungerford.
Thomas’ great grandson Robert 3rd Baron Hungerford was to lose everything including his life when he supported the Lancastrian side in the War of the Roses. Him and his son Thomas were executed by Edward IV.To add insult their lands were granted to the future king Richard III. 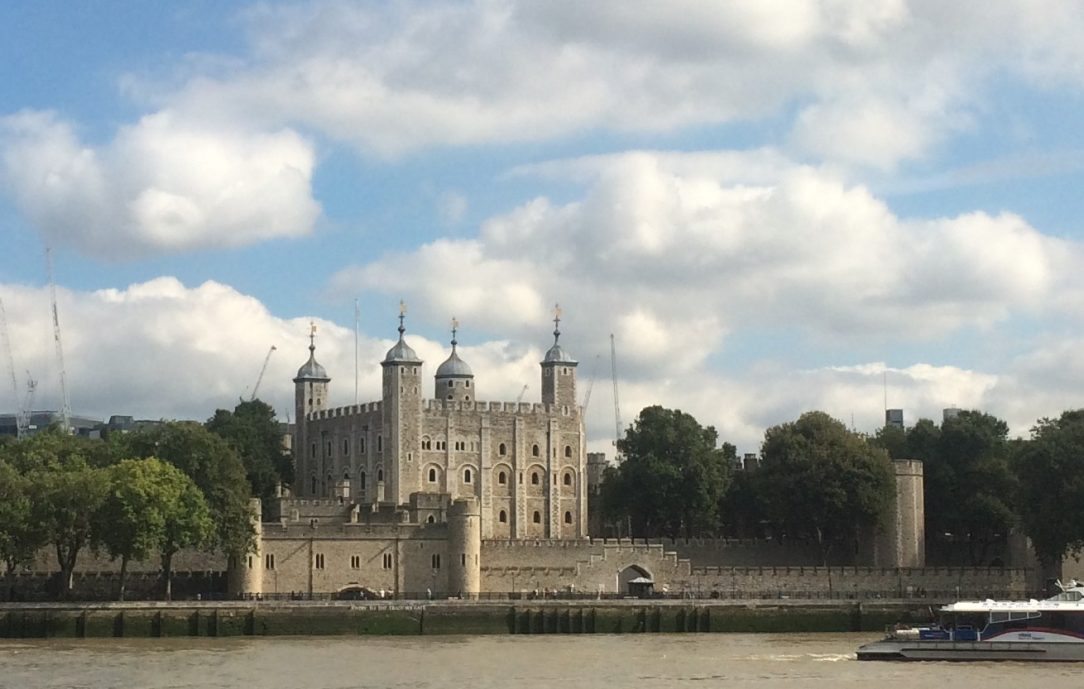 When we visited the Tower Of London we learnt that Richard III was a real nasty piece of work. After his brother King Edward IV’s death he became Lord Protector of the realm as his 12 year old nephew Edward V was too young to reign. The young Edward V and his brother Richard were moved to the Tower of London in preparation for Edwards coronation. In the meantime Richard III had the marriage of his brother revoked, Edward V made illegitimate and as such unable to be king. Then with support of the Parliament Richard III was crowned King. The two Princes were never seen again which sparked a rumour that the Princes were killed in the tower. Two small skeletons were found in a trunk buried near the White Tower. 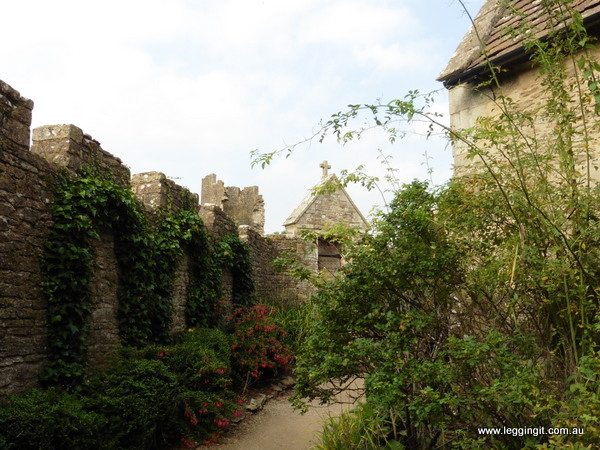 The Hungerford’s didn’t stay locked out of the castle for very long. Robert’s son Walter of Farleigh, was rewarded with the return of all their lands and was knighted on the battlefield during the victorious Battle of Bosworth Field. That was the decisive battle in the War of the Roses which saw the Lancastrians under Henry Tudor victorious and King Richard III dead.

Sir Walters son, Edward, was a right hand man to Henry VIII and was knighted at the Seige of Tournai. After his first wife died he married his steward’s recently widowed wife Agnes. Rumour had it that she strangled her husband John Cote and burnt his body in the oven at Farleigh Hungerford Castle’s great hall. Whilst Sir Edward was alive she was safe from prosecution but after his death in 1522, she was no longer protected. Charges were laid, she and her accomplice were found guilty, and transported to Tyburn where they danced the “Tyburn Jig”. (Were hung) 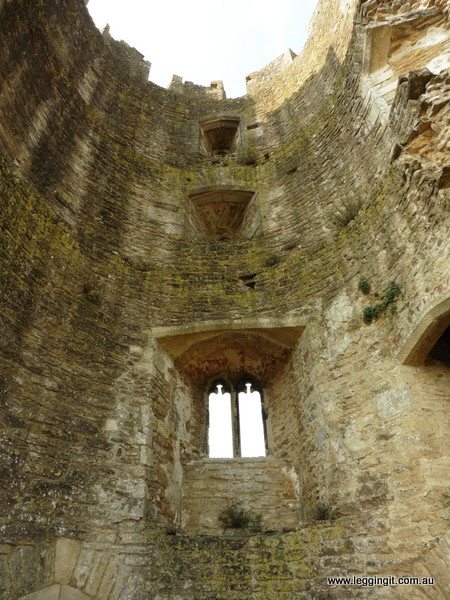 The scandal associated with Farleigh Hungerford Castle didn’t end there. Sir Edwards son Walter imprisoned his third wife Elizabeth in the tower for four years and supposedly tried to poison her. The local villagers sympathised with Elizabeth and at night she would lower a bucket from the tower which they would fill with food.
King Henry VIII executed him for siding with Thomas Cromwell, who’d been sorting out wives and divorces for Henry VIII but had fallen out of favour with the king.

Another famous woman associated both with Farleigh Hungerford Castle and Henry VIII was Margaret Pole, 8th Countess of Salisbury. She was born in the Ladies Tower (where Walter imprisoned Elizabeth his wife). Margaret Pole was to pay for the sins of her son. Her son Reginald was promoted to cardinal by Pope Paul III. The pope set about establishing an embargo against Henry VIII with Reginald Pole organising it. As Henry VIII couldn’t touch Reginald Pole he sentenced Margaret Pole to death for treason on trumped up charges.
Margaret Pole’s execution was pretty gruesome as she wouldn’t put her head on the chopping block. She said she never committed a crime so she was hacked to death at Tower of London by a substitute executioner.
Once again by siding with the wrong side, the family lost all their lands. It was up to Sir Walters son Walter (knight of Farley) to get the family’s lands back. which he did in 1554.

The last Hungerford to inherit the castle was another Edward Hungerford, known as Edward the Spendthrift. He squandered the family fortune on gambling, and living a lavish lifestyle. By 1686 after selling all his estates in Wiltshire the party boy had to sell it.
The Castle passed through a few different sets of hands and by 1701 the castle had fallen into disrepair.

The Houlton family bought the castle in 1730 to quarry it for the stone for their own house and to remove any item of worth. St Leonard’s Chapel however was restored and became curiosity museum with items like Oliver Cromwell’s boots hanging on the walls. 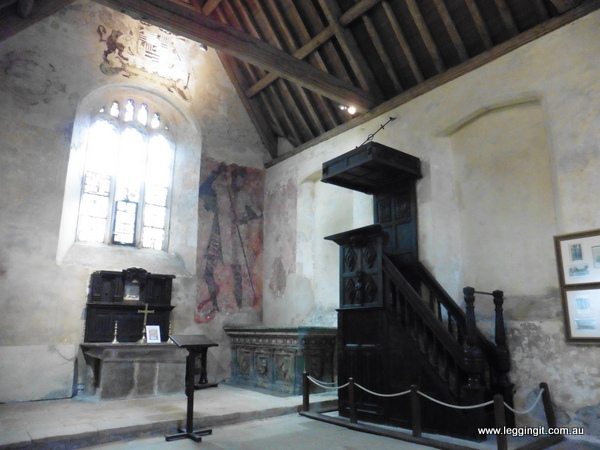 The St Leonard’s Chapel is a small medieval chapel, featuring some of the only remaining medieval murals in the country. Featuring on the wall to the right of the altar is a painting of St George killing the dragon and it dates dates back 600 years. Also around the walls and on the beams medieval paintings give a sense of what the chapel looked like hundreds of years ago. 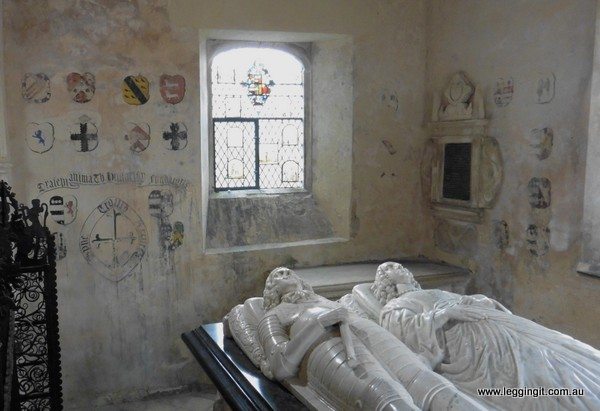 In the transept are a few 17th century tombs of the Hungerford’s all ornately decorated as was the fashion of the time. The painted walls featuring the crests of the family through the centuries. 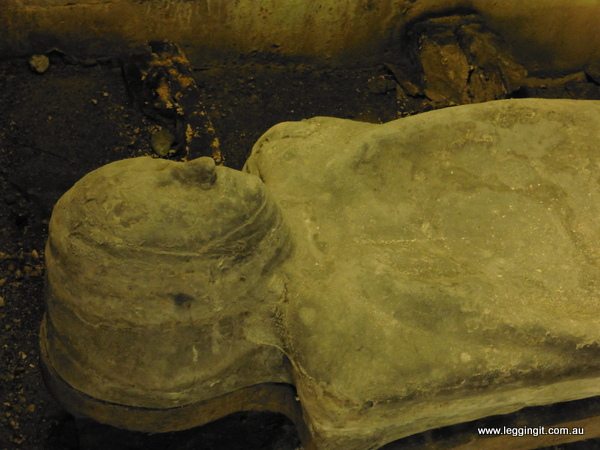 Containing a variety of lead anthropomorphic coffins, the crypt is a fascinating place to visit. While you can no longer actually go inside, you can see them all clearly including two tiny children’s ones. Their style shows defined facial features and are in excellent condition. They featured as part of an emerging Victorian tourism industry, this saw tourists flock to the castle to look at the coffins, some people even feeling the need to drink the fluid the leached out….you can see the hole for the straw on the side of the head aaargh.  They are said to be some of the best examples of these type of coffins still surviving today. 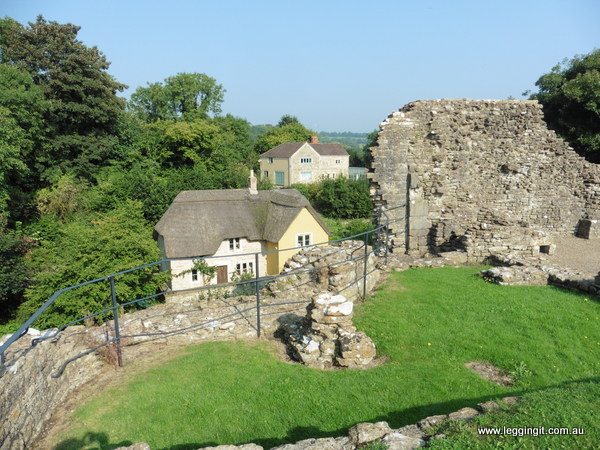 In 1915 Farleigh Hungerford Castle was passed to Office of Works and since then has become an English Heritage site. These days much of the outer wall remains including the eastern gatehouse but of the inner castle and great hall only the foundations survive. Part of the lady tower and the south west tower add a bit of shape to the ruins.
It was an interesting castle to visit with a fascinating history. Usually the audio guides get a bit boring after a while but the stories of castle kept us entertained from beginning to end.

Farleigh Hungerford Castle is operated by  English Heritage, the entry cost is £4.50  and  includes a really good audioguide which explained some of the history of the ancient castle. Opening hour are available here.