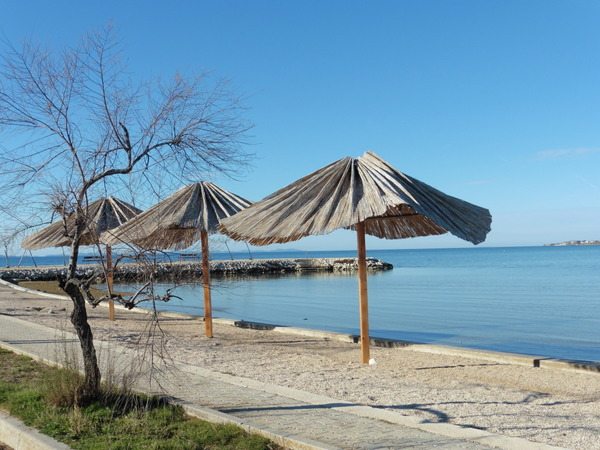 After yesterday’s visit to Uglijan island we decided to follow the coastal roads from Zadar out to Vir and eventually arrive in Nin. There we planned to meet Sarah-Jane and her family from Chasing The Donkey . Their blog was one of the things that inspired us to visit Croatia. 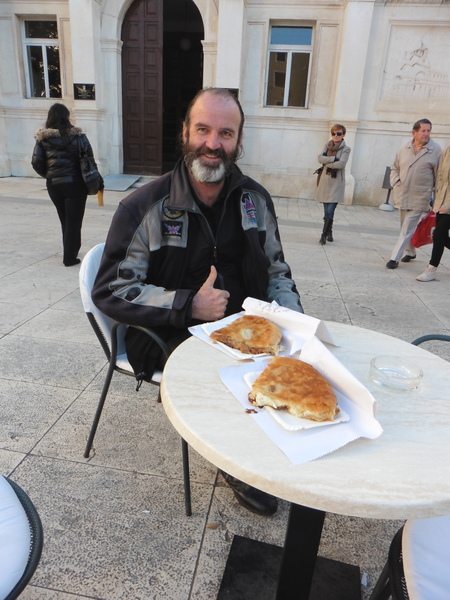 As there was nothing to eat in the apartment we visited the local Pekara where we bought two Berak. They’re a type of pie with flakey pastry on top and bottom, filled with sweet or savoury fillings. I ordered one with apple and Michele the feta cheese one. Our favourite cafe provided us two coffees and a table to eat it at. They were pretty tasty but with all that pastry so filling.
After breakfast we boarded the bike and headed around to the other side of the harbour to pick up the coastal road.
The map showed a road which traced the coastline pretty closely but we soon found that first part of it was one way. The opposite to our direction unfortunately. Not to be deterred we kept the coast on our left and picked our way around until we found a road. A lot of the little towns along the coast are full of apartments which are locked up for the winter and some are just life supports for the huge German resorts. At this time of year they resemble the Costa Del Sol which we visited last year during winter, vacant. 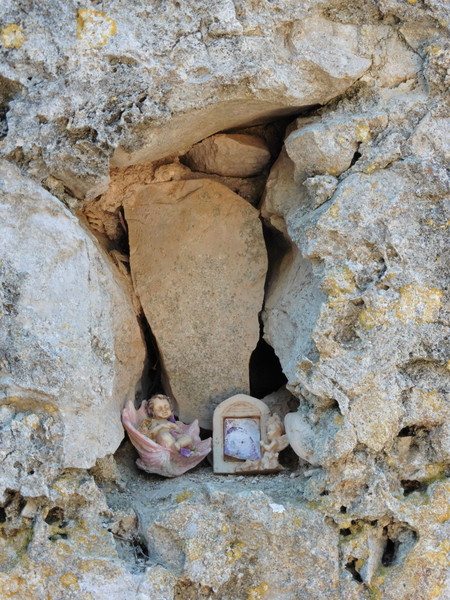 At Dikla as we were riding down a dirt track we discovered a little stone church. It looked abandoned and unused but on closer inspection we found a brick missing in the facade where tiny angels had been placed. In the town of Nin we also discovered votives like this in the worlds tiniest cathedral. 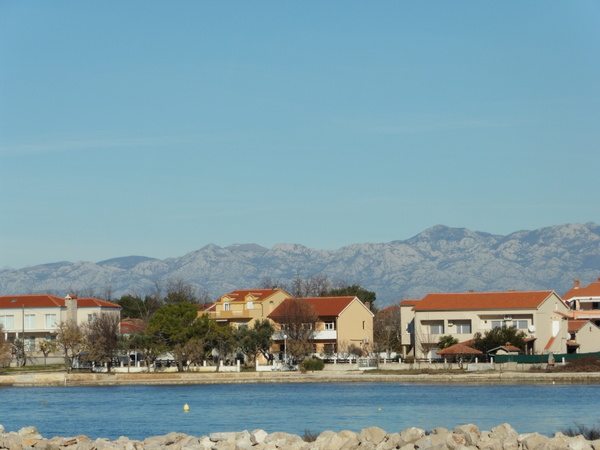 The Croatian coast around Zadar is just beautiful with lots of beaches and bays filled with crystal clear water. It was just too much for me and finding a secluded spot ripped of my bike gear and got into the water. The water was as beautiful as it looked. As I was drying out on the shore a local woman came wandering along which broke the peace of the moment, so it was time to dry off and hit the road again. 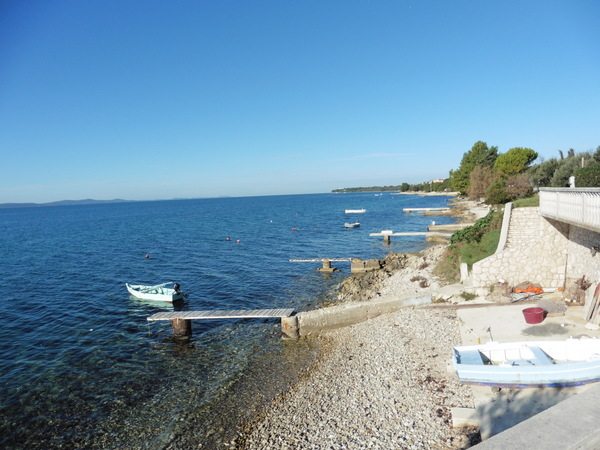 We rode over the bridge to the island of Vir and found it was pretty deserted. Finding something for lunch was also challenging and after stopping at a pizza shop at the end of the island to find they didn’t start serving food until late in the day we retreated to a Pekara where we bought a Berak. This time it was filled with meat, sort of like a flakey meat pie which we ate in the carpark. 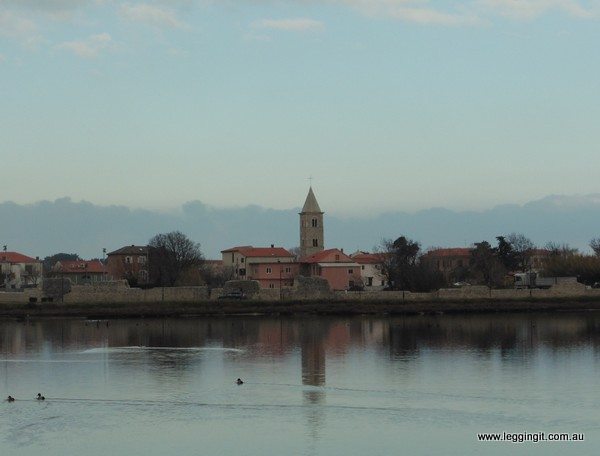 As the time was getting on we headed back to Nin where we caught up with our Australian travel blogger friends. How good was it to be speaking to Australians again. Like a breath of fresh air. Although lots of people speak English there are some cultural differences between countries. It was great to hear about their life in Croatia and their story of what led them to settle here. They gave us an insight into Croatian life and how things get done or not done. 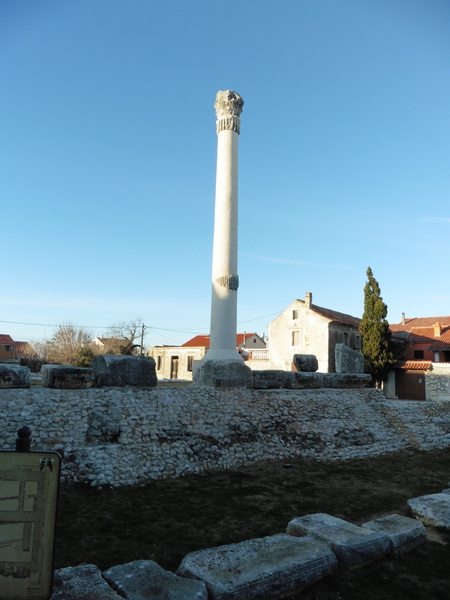 After a coffee we walked around Nin and we got a guided tour of the beautiful little town. We visited some of the Roman ruins I(which we had missed on our last visit) , and the worlds smallest cathedral The Holy Cross Church which dates from the 9th century. It was so interesting hearing about graveyard real estate. As we are working on a cemeteries series it’s interesting learning how different cultures commemorate their dead. The latest trend is cemetery speculation. Finding a family tomb in the “right” cemetery is very important. People have been buying and selling cemetery real estate in an effort to get the right spot, make a little money or both. How fascinating. 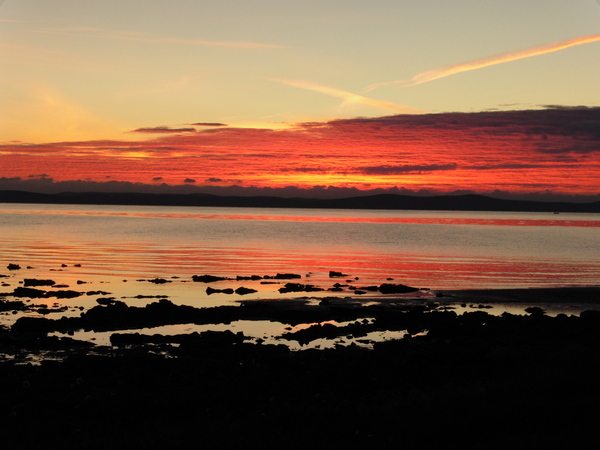 As it was getting close to dark we said our goodbyes and headed off to try and catch some sunset photos at the beach.
Tomorrow we say goodbye to Zadar and head to Split.