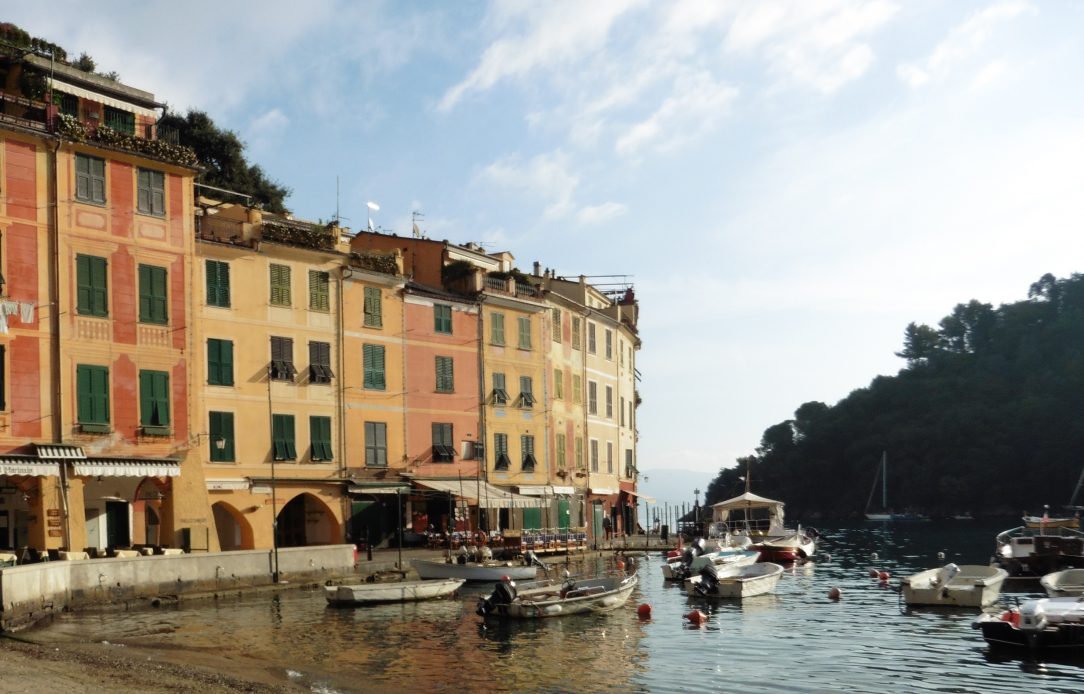 It was an early start this morning as we headed from Genova to Pisa. With 50 school kids arriving last night on our floor the last thing we wanted was to be lining up for the shower or worse still lining up for the toilet. Even though Michele had complained that the toilets stunk because they hadn’t been cleaned properly nothing had been done despite assurance otherwise. Now with our floor at maximum capacity we were forced to either hold our breath and use the toilet with a lockable door or use the one with the broken lock which had a window you could open to let some fresh air in. Then it became a contortion act trying to keep the door closed and relieve yourself. Meanwhile the two other toilets remained locked. Youth hostels are not what they used to be.
After packing the bike we were off down the twisting windy streets as we made our way down the hill. It was peak hour for schools and there were kids everywhere and cars double parked while other people are trying to get to work. Scooters were going up over pavements and cutting through parks it was just like Asia. Heading through the city it was a mad race to get ahead of the traffic and every time we’d just get ahead a scooter would overtake us.lol 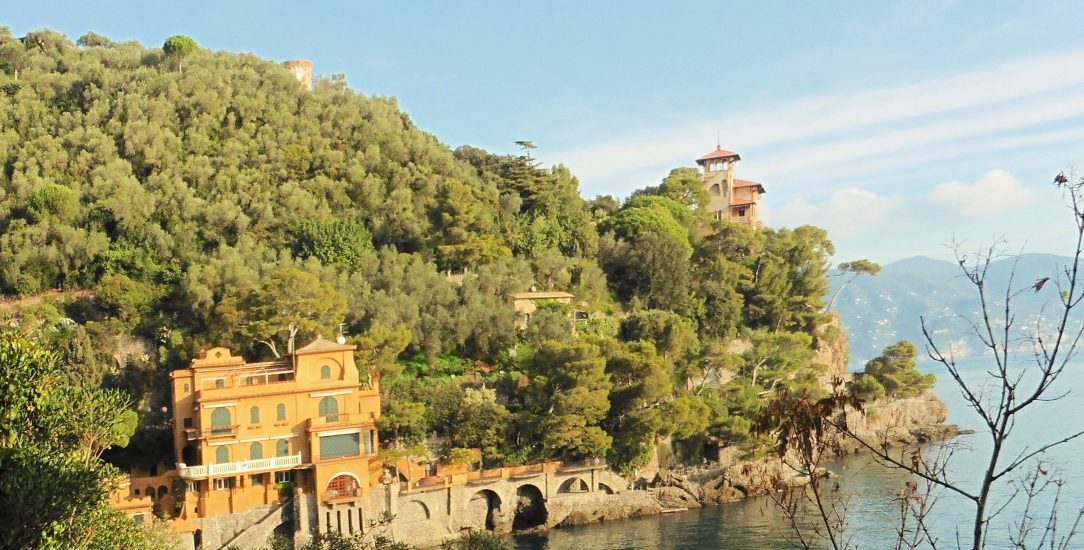 Eventually we were out of the craziness of Genoa (Genova) and onto the coast road which meandered along the coast. One of Michele’s favourite restaurants in Perth is Portofinos and after seeing pictures of the seaside village when we visited we just had to go there. It was a great ride back from Ruffino with a road inches away from the water. When we reached Porofino the pictures we’d seen didn’t do it justice as it was more beautiful than we imagined. 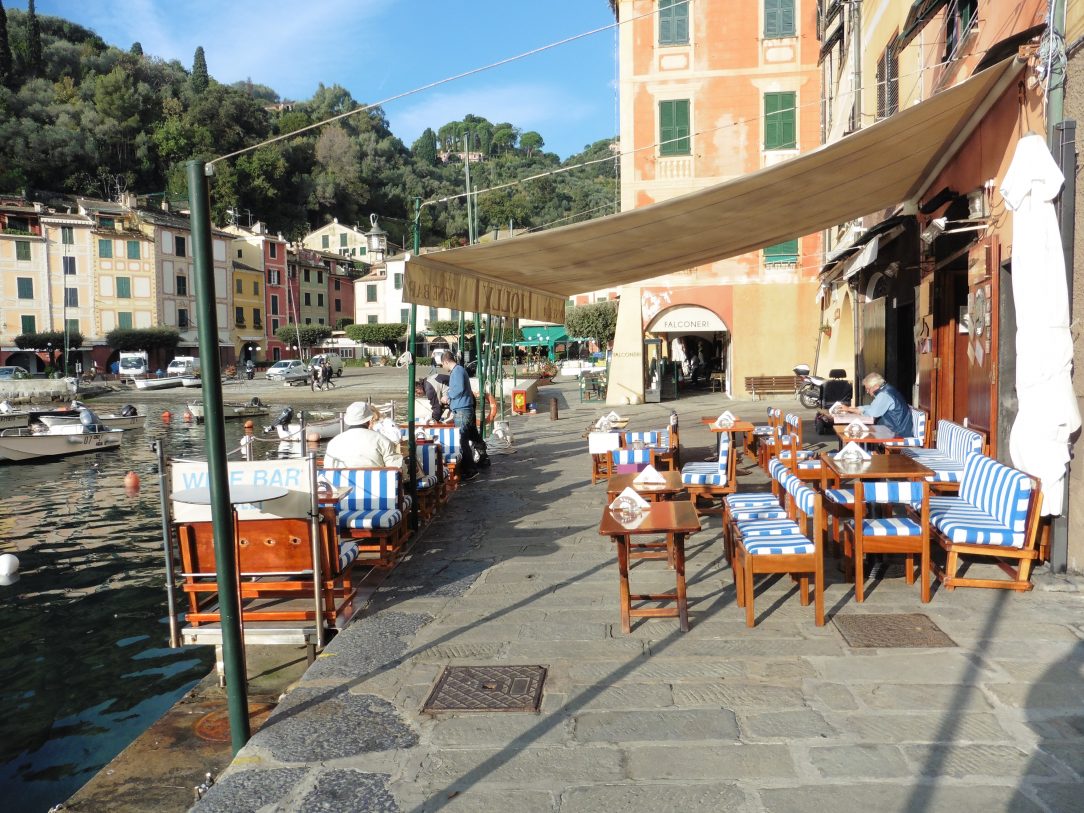 The downfall was the prices at the cafe, €5 ($7.30 Aus) for a coffee aaargh… After seeing these sorts of prices,our dreams of coffee and pastries overlooking the water evaporated as we retraced our steps back to the bike. 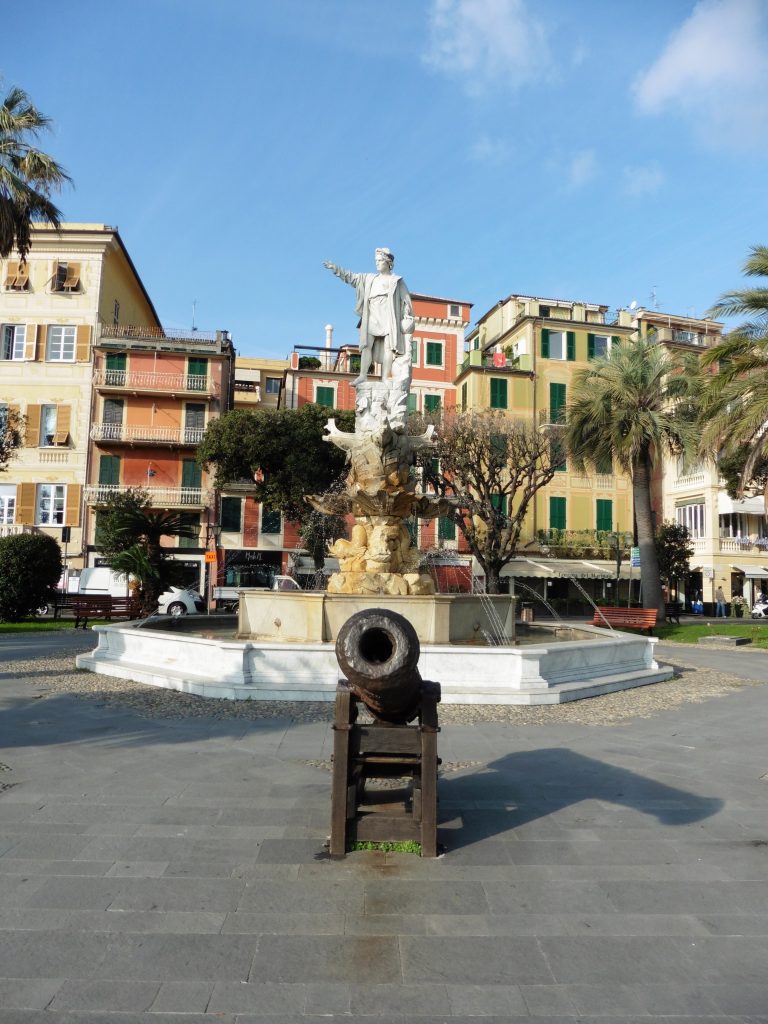 Marguerite had a few nice cafes so after parking the bike outside the cafe we ordered coffee and pastries for about the cost of a cup of coffee in Portofino. Eventually the local policeman came along to inform us to move our bike (maybe shouldn’t have parked outside his booth lol). That was our cue to get back on the bike and head off. 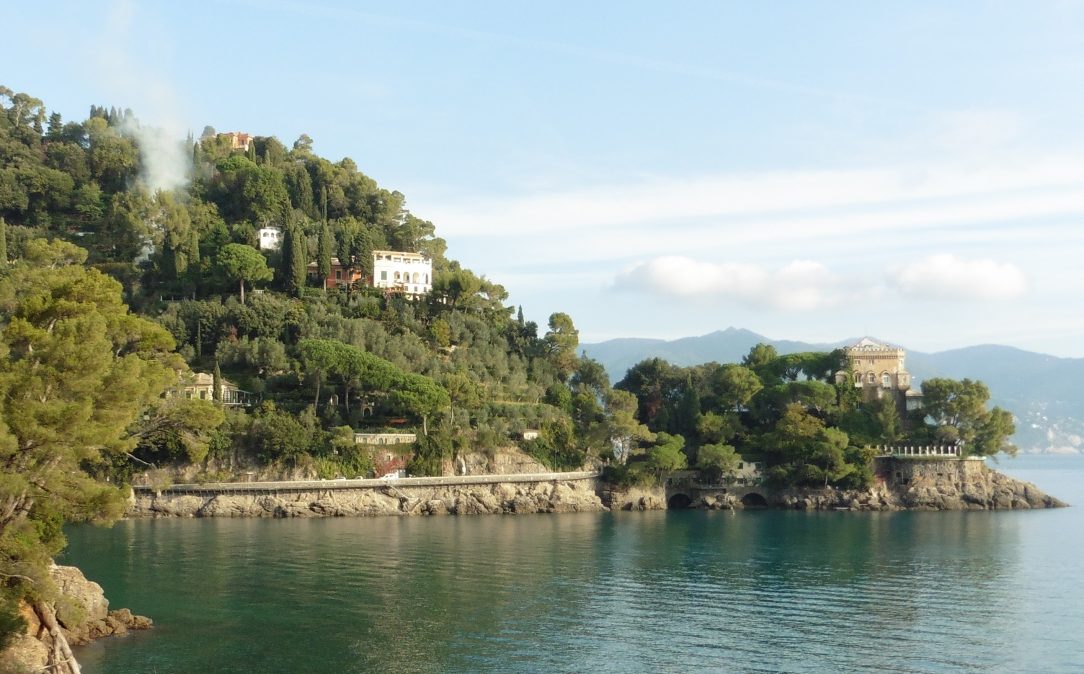 Travelling along the coast was pretty slow as the roads were fairly poor and very windy. By lunchtime we’d reached Saint Gregorio on the beach so we headed down and took a break. It was a nice little spot with an old railway bridge converted into parking. High up in the hills Saint Gregorio church was visible. 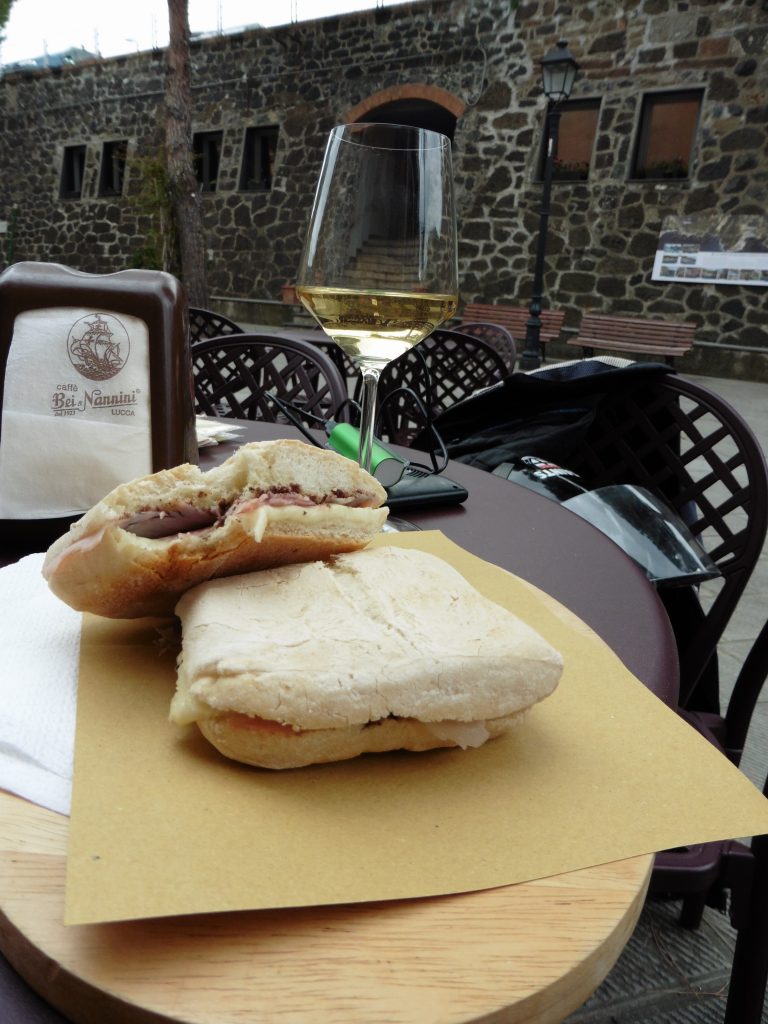 After lunch we headed off again and saw a sign which said something about road being damaged by flood (on top of a mountain?) Sure enough about 5 km’s down the road we found a big fence stretching across the road. Damn it! As we headed back up the road we passed an old lady who we’d waved to only a few minutes ago as we waved again she was laughing her head off  waving as we went past.
In true Italian style there was no diversion. The road was closed and that was that. Further up the road we found a junction and hoping for the best followed it. It went down to a one lane road before eventually leading back onto the main road….phew. 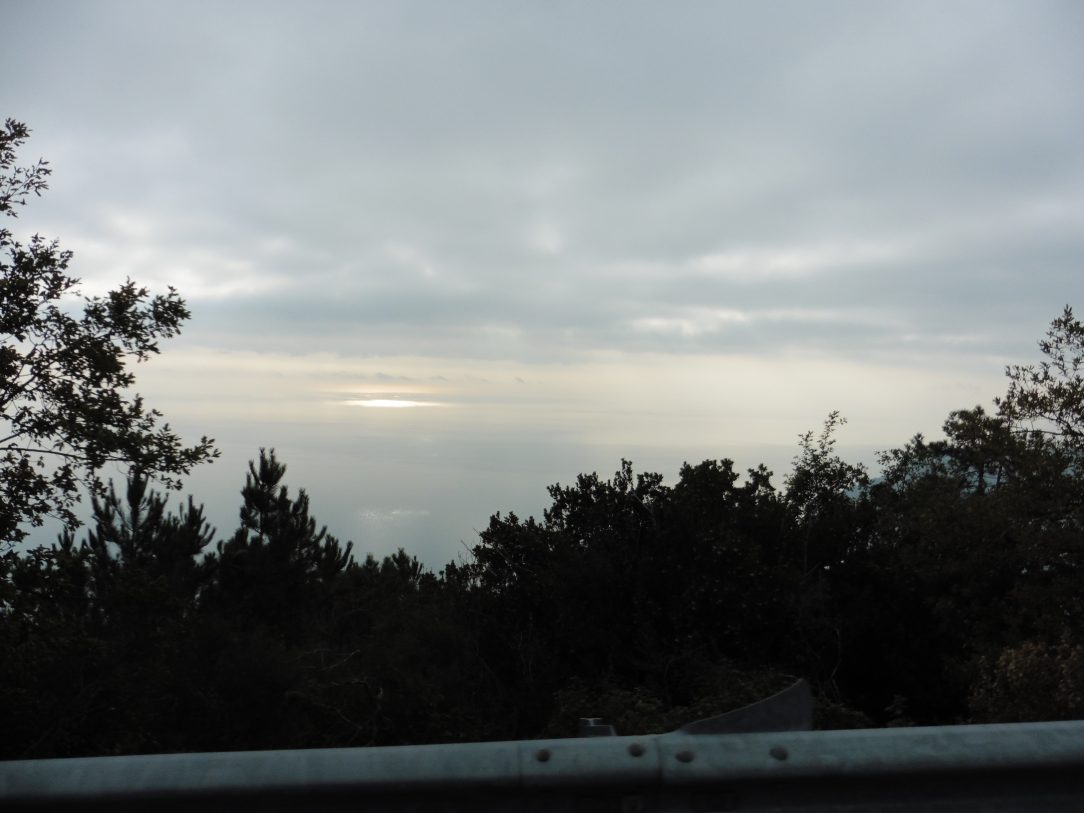 Once again we got caught out as another road we followed was closed we’d ridden past the road closed sign and not noticed it as we turned. Double damn it! Eventually we made it down onto the coast. Flat roads where we could open the throttle up and make up some time. It was close to 5 o’clock so the sun was slowly setting. The coastal towns were pretty crap with the usual soulless beachside apartments and all the crap which goes with it. Yep prostitutes. On the edge of Pisa the working girls were out in force. It was dark by the time we arrived in Culci. It was a long run up a winding hill and as we reached the edge of the village the road reverted to one lane and the road got steeper. It was all first and second gear as we picked our way up through the village trying to find our guesthouse. As we weren’t entirely sure what we were looking for we stopped and Michele got off. I had to pull the bike off the street as a car came down the hill (yes the road was that small) . The car stopped and Michele asked the driver if he knew this guesthouse. Luckily Lee spoke very good English and knew the owners of the guesthouse very well. Soon he was on the phone and had contacted them and was told they were waiting for us. Lee then gave us directions, “Just go up the hill through the arch, don’t take the first left or the second or third right turns then once you hit the gravel it’s about another 200 metres.” There were some white knuckles as we rode up the hill and down the bumpy one lane track.We met one of the owners on the track who was walking home. Just when we reached the gravel we met the other owner Daniel who’d come to guide us in his three wheeled Piaggio ute. I’m glad we didn’t get a lift with him because he drove like a madman. Lol 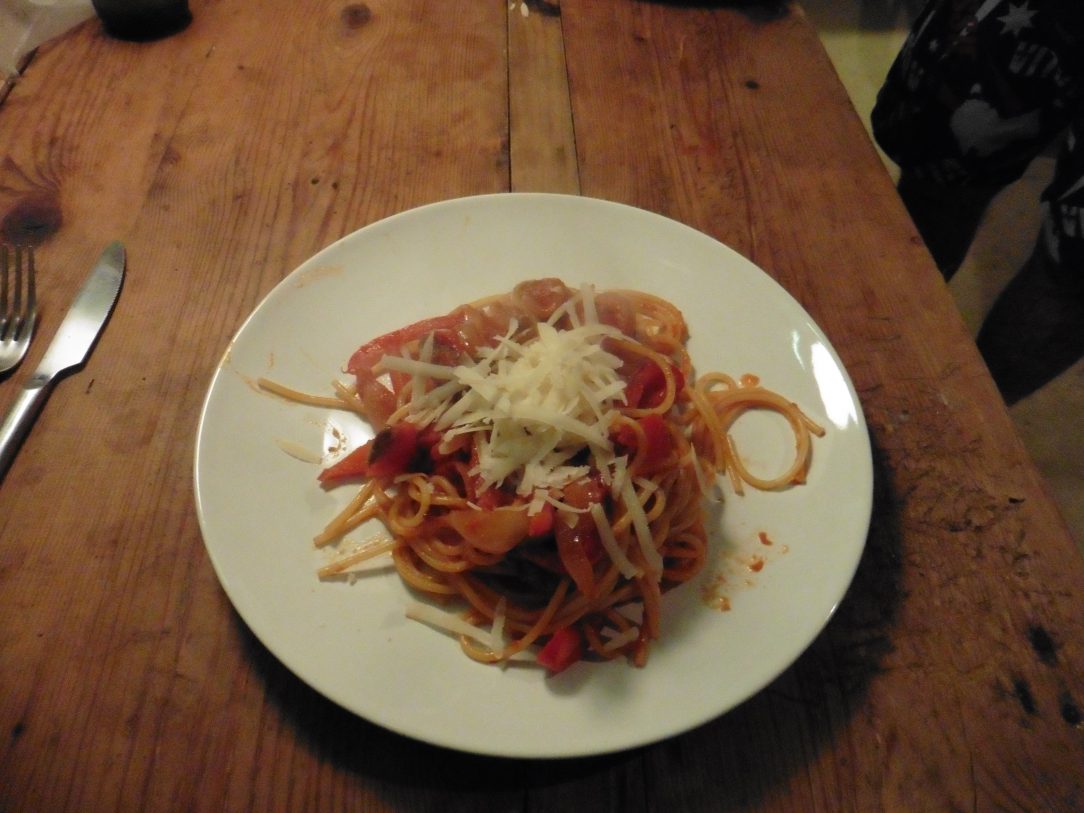 Soon we were at our home for the next two nights, of course we had not managed to get to a market to get any food so were thinking we would be living on the two oranges we had left but our wonderful hosts returned with pasta and some ingredients. Soon we were enjoying a nice dinner of spaghetti with tomato, mushroom, onion and capsicum sauce. The rustic cabin was perfect, everything we expected from Tuscany with wisteria hanging from the trellis.
Tomorrow we head into Pisa.