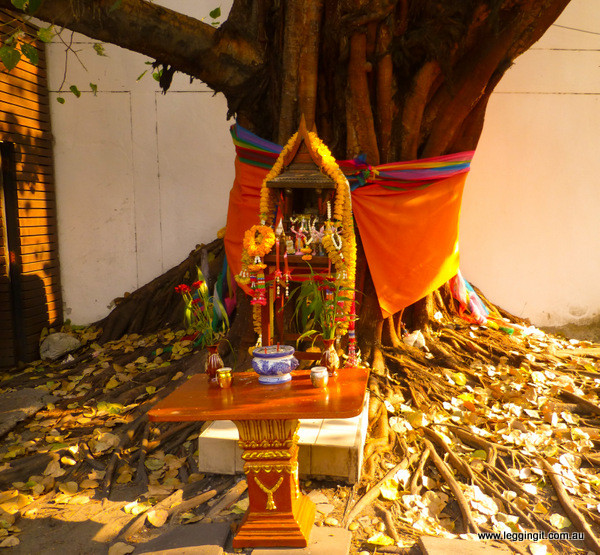 For some reason, we were up with the sparrows this morning but it took us ages to get moving. We’d bought pastries and fruit last night so it was Pineapple, and Croissants for breakfast. We kicked around what to do until we thought let’s go organise our bus tickets to Siem Riep. 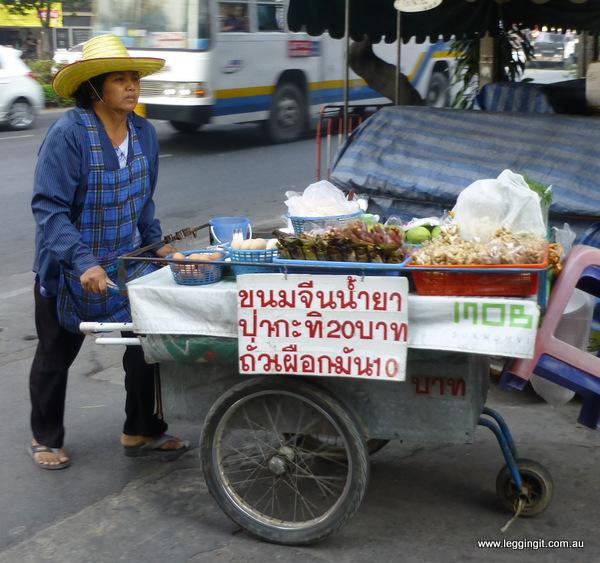 We caught the BTS out to Mo Chit, which is the end of the line and also the site of a huge market called Chattakuk which is popular with westerners. We jumped in the first taxi we could find and asked to be taken to Mo Chit bus station. We’d just settled into the back seat when the taxi driver did a u-turn on our side of the 4 lane highway and started to drive back towards the oncoming traffic. Michele and I looked at each other and mouthed to each other “we are going to die”. A bit dramatic and obviously it didn’t happen he stayed to the left and the traffic passed us on Michele’s side so I was in no danger. There was a side road just back from the station that every taxi, bus, motorbike, tuk-tuk, bicycle and man and their dog was desperately trying to get into creating a traffic snarl and it seems local taxies have some local allowance where they’re allowed to drive the wrong way down the highway to get to this road. Well once we finally got through the road we then went the scenic route, past people’s backyards, and then around one highway one way then back the other way before we finally arrived at the bus station 80 baht later. You’re probably thinking those ripoff taxi drivers but we were laughing our heads off because he was playing a cd with some hillbilly song about some guys first time, and it was hilarious. Well worth the 80 baht.

The tickets to Siem Reap were going to be a drama until Michele remembered she had her passport number in an email on her phone, I, of course, had forgotten to carry the passports and my phone with a photo of our passports was flat. We paid the lady 1,500 baht and looked for a taxi. A short 50 baht fare later we were back at the station.

Michele saw a lady with a mango on her head (as you do) so we headed back to have a look and take a photo. So we had a bit of a geek at the markets by the side of the road and bought some sticky rice and mango from the lady with the Mango on her Head and ate it in the park. It was delicious. 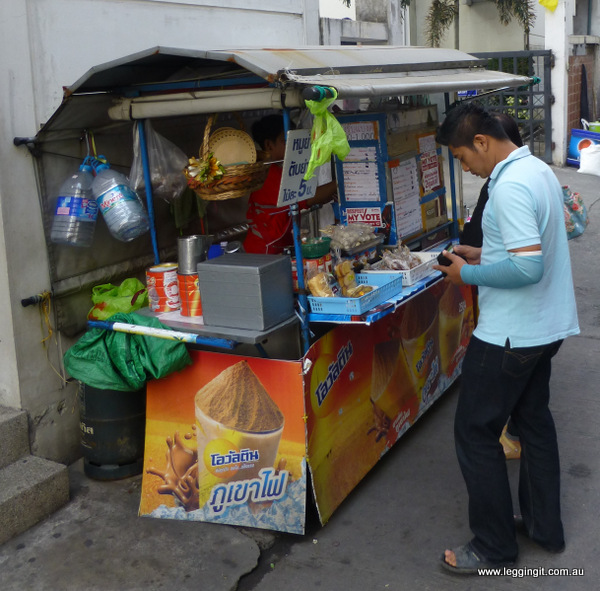 We wandered back through the markets, there were heaps of food, clothes, gadgets and even a ladyboy singing near the station entrance the place was insane, and that wasn’t even the main markets.

Back on the train, we decided to visit the Fertility Shrine at the back of the Swissotel in Chit Lom. If you’ve never been to Thailand they practice a mixture of Buddhism, Hinduism and Animism where every house, building even shopping centres have a shrine to appease the spirit world. 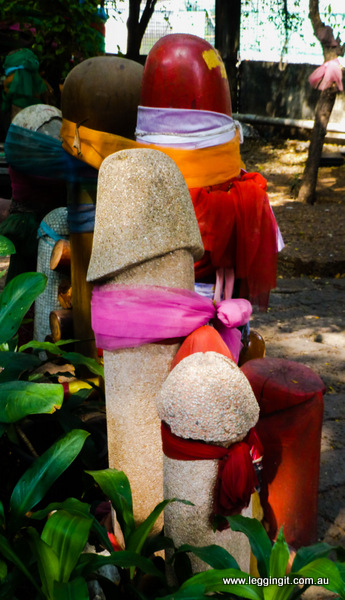 The shrine wasn’t far from the station but the guide said it was in the back of the grounds and they were correct as it was the back corner. 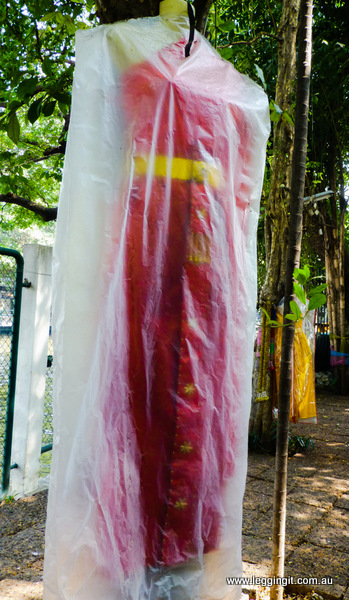 The shrine is believed to aid those wishing to conceive and has silk dresses wrapped in plastic hanging from the trees (which could be wedding dresses) and all sizes of coloured phallic devices around the trunks of the holy trees there. 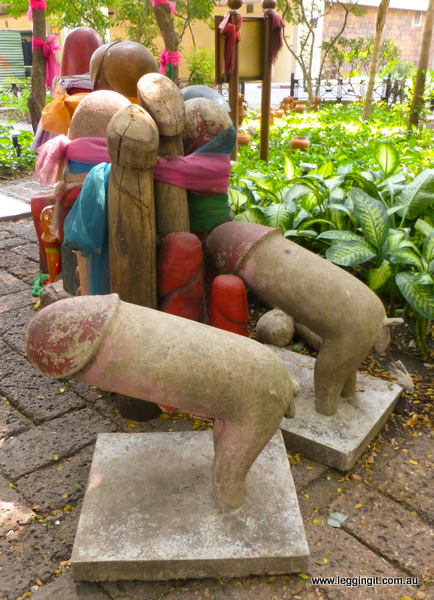 The shrine obviously has significance to locals as I watched a local walking around the corner of the building opposite, stop and pray at the shrine. 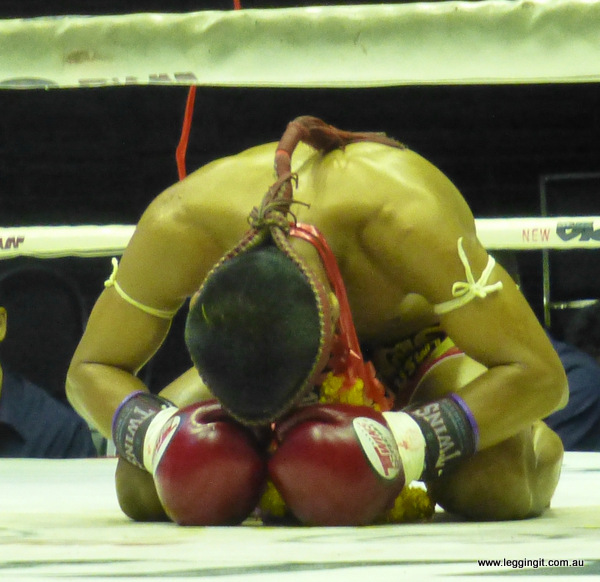 I really wanted to go to Lumphini Stadium for the Muay Thai but Michele wasn’t feeling very well so she bought a DVD and settled down in the room and didn’t join me. Too bad because it was awesome. The ladies are probably all thinking its about bashing someone’s head in and all that but it is a bit more than that. The two fighters come out with all their gear on and then enter the ring they pray in every corner before praying in the centre of the ring. 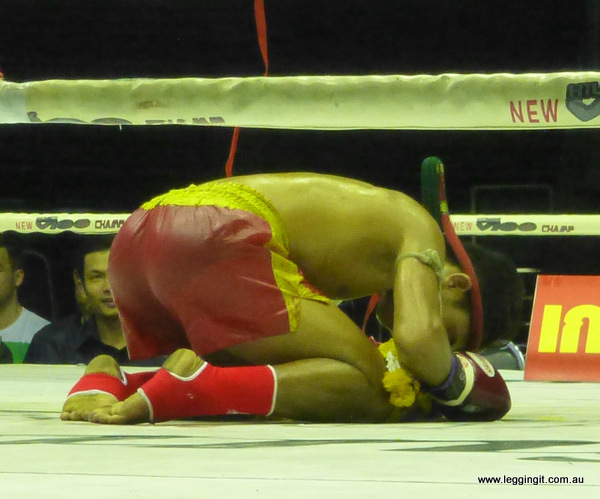 Then they perform actions which are part of their ritual or limbering up. It’s all quite fascinating. Their trainers pray for them in the corners before splashing them with water. Then they walk out and touch gloves. 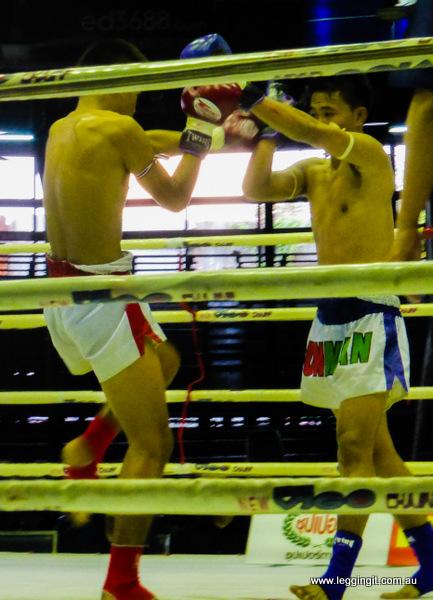 It was a great night only one guy was knocked down and the fight stopped. The rest of the fights were high energy matches with heaps of kicking, elbows, punches and knees. The crowd was on their feet with supporters from each side yelling each time their fighter landed a scoring shot to make sure the judges saw it and to urge their fighter on. 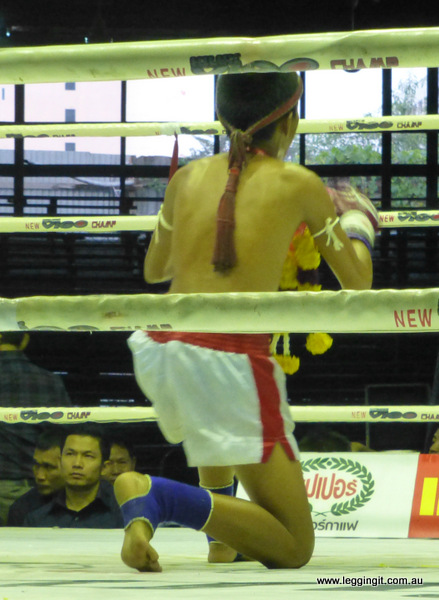 They have an orchestra who play during the fights playing traditional instruments who’s job is to inspire the fighters. They just play like they’re possessed (but not possessed by something musical). There are signs announcing “no Gambling” but judging by the crowd up the back there has to be someone on the “punt”.

It was a great night out and the trip home was interesting as one of the train changes was at Sukkhomvit Station where the protest has been happening. It was like a party with loud music and hundreds of whistles and people coming and going with the red white blue Thai ribbon identifying their part in the protest.

Meanwhile back at the hotel, we were serenaded until midnight by karaoke singers of mixed talent as we drifted off to sleep.