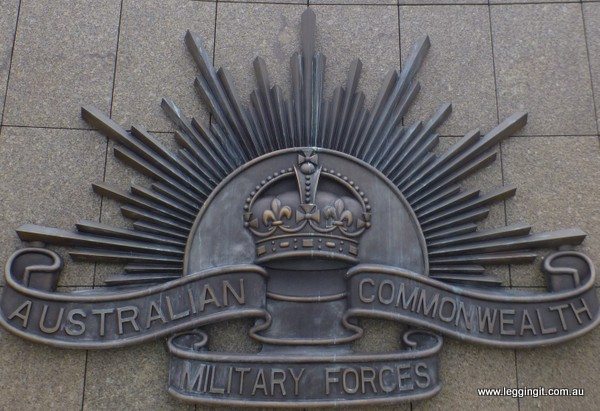 On the third day in Amiens we rode into the city where Michele, Val and Sandra spent the day together. Meanwhile I headed out of town to visit the Australian battlefields on the Somme. 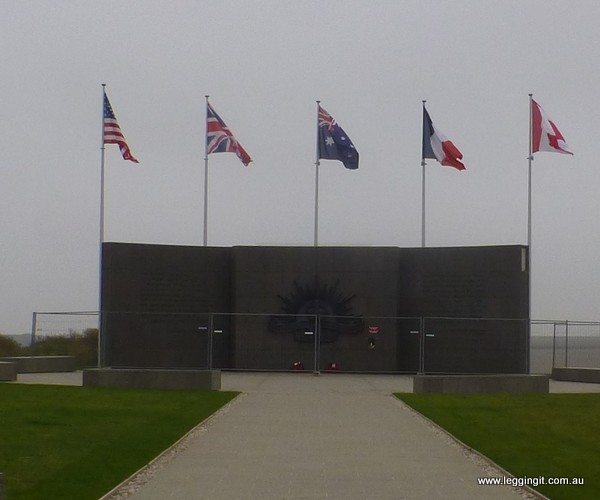 After wasting an hour getting lost, as I was trying to navigate using a large scale map, I finally found my way to Le Hamel. At the tiny village of Le Hamel not far from Villers-Bretoneux is the newly inaugurated Australian Corps Memorial Park. It’s the site of General Monash’s perfectly planned battle which included the use of tanks, which took place on the 4th July 1918. It was one of the most decisive battles of the war involving Australian troops. The park is set on top of the hill overlooking fields in all directions with a pathway lined with story boards leading to the memorial and the site of some of the old trenches.

Unlike the memorial at Villers-Bretoneux there’s facilities which came in handy on this bitterly cold day. It’s cold foggy days like today that you get a feel for some of the conditions that the soldiers had to face. It’s quite eerie in the fog. Thankfully it wasn’t raining, and I didn’t have to face what they had to. Being by myself however was quite nice just wandering around the memorial alone with my thoughts. I had the thermos in the pannier so I had a cuppa of sweet black tea on the ghostly hallowed fields. 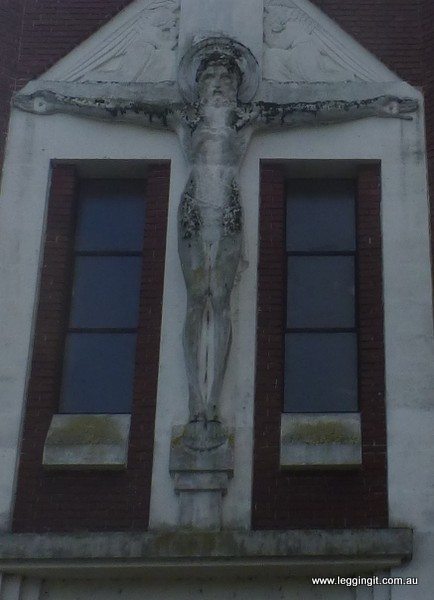 Climbing back on the bike I decided to head towards Peronne. I was going to head towards the two other Australian memorials over that way. Along the way I stopped off at Heath Cemetery, near Harbonnières. Like most of the cemeteries around the area there’s a mixture of soldiers from all over the Commonwealth buried here. However for a little cemetery of almost 1500 there’s 910 Australians buried here including two Victoria Cross recipients and an Aboriginal medal recipient. Also in the cemetery are memorials with the names of 19 British and 2 Australians buried in other cemeteries whose graves could not be found. Another memorial states that some soldiers are buried somewhere near this spot. It made me think of Michele’s Great Uncle Tom who was killed at Ypres, but due to the fighting his grave was lost. With no known grave, now he’s just a name on a wall amongst thousands of others.

At the crossroads at Villers-Carbonnel a small French Military Cemetery caught my eye so I decided to stop. Although it was well kept, unlike the British and Commonwealth cemeteries there were no notes, flags, flowers, or personal objects. It made me wonder if all the relatives of these French soldiers who gave their all had perished or if these French soldiers were just forgotten. 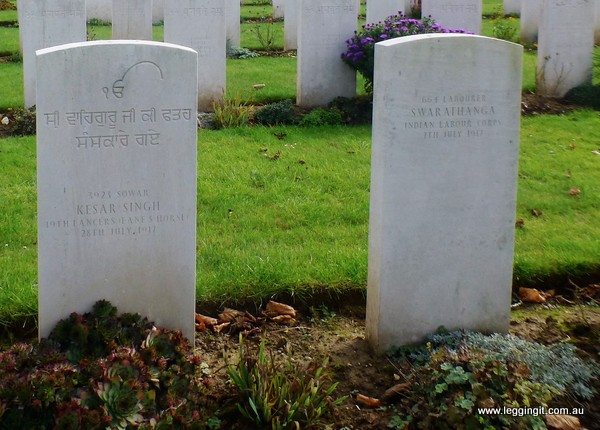 As the day was quickly disappearing, I cut short my  visit to Peronne with just a leisurely drive around before heading towards Rancourt. All along the roads around the Somme are markers which are part of the Somme history trail. Personally I think you’d need up to two weeks to really explore the area with a few rest days.

At Rancourt there are three major cemeteries British, French and German which date back to late 1916 when there was fierce fighting around the area which resulted in the recapture of the town. The largest French Military Cemetery on the Somme, is situated here with a church alongside it and a memorial chapel. The chapel was built by the du Bos family, who were originally from this region. It was built to commemorate their son and his comrades who were killed in action on 25 September 1916.
With lots of red flowers growing around the graves it’s quite colourful, however like the cemetery at Villers-Carbonnel it seems quite well kept but not well visited, despite this being the final resting place for over 8,500 French soldiers. 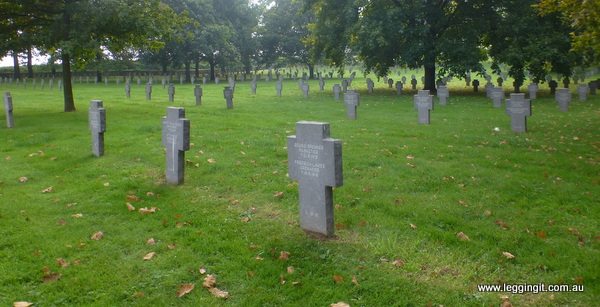 Not far from the French Military Cemetery is the Rancourt Soldatenfriedhof, the German Military Cemetery. It’s red granite crosses set amongst trees are a little eerie. In this cemetery beneath two slabs of granite are two mass graves containing 7 492 soldiers of which only 2 316 of whom are known. So many young men who gave their all when their country’s diplomats failed, yet they’re buried in a mass grave. It’s a fact which is hard to comprehend.
The German Military Cemetery might be an unfortunate reminder that the current Germany seems to be trying to distance itself from, but those men gave their all for their country and should be remembered. It is heartening to see jews and gentiles buried side by side. A few flowers on graves tell me that these young men are remembered by the people who matter most, their families. 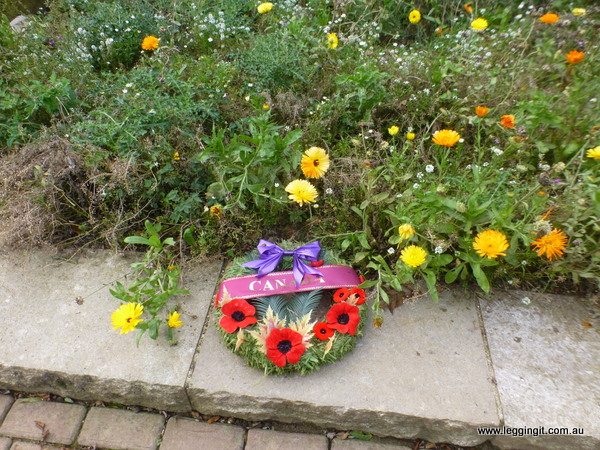 A wreath laid by veterans from Canada is a fitting tribute as there are no winners in war just survivors. 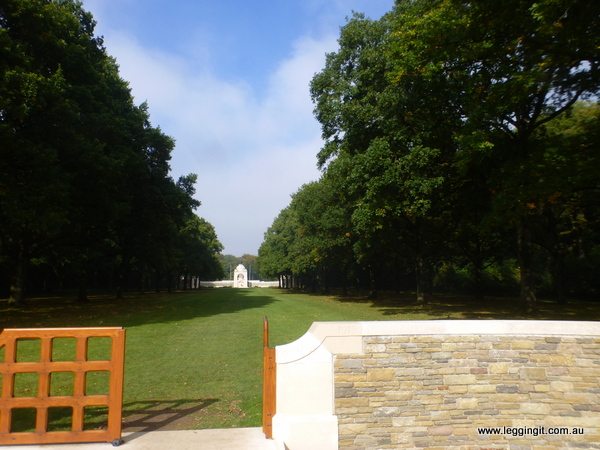 As all the photos we took yesterday didn’t turn out I retraced some of our route back through Longueval to the New Zealand Memorial. Along the way I briefly stopped at the South African Memorial at Delville Wood, on the other side of Longueville. It was here that the South African Brigade fought its first battle and its here that all South Africans who served throughout the war are commemorated. After the war the trees were replanted and a monument raised in the centre for commemoration. These days the trees are all quite tall so walking through the trails is quite peaceful. 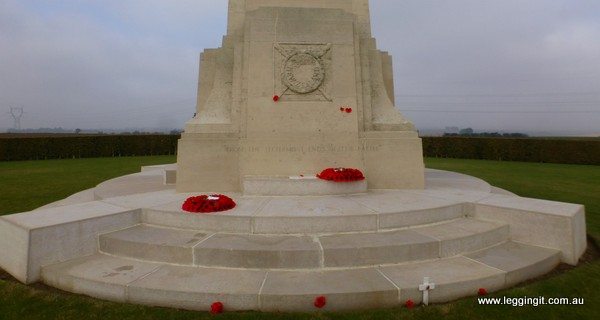 Time was now getting away from me so I took a run up to the New Zealand Memorial at Longueval situated where the New Zealand Division started their attack during the Battle of Flers-Courcelette on 15 September 1916. The monument is a pretty simple obelisk with the following words on it “In Honour of the men of the New Zealand Division. First Battle of the Somme, 1916” On the sides and back in English and french are also “From the utmost ends of the earth” “New Zealand Division, Auckland, Wellington, Canterbury, Otago” and “The New Zealand Division, after gaining this position as their first objective, launched from it the successful attack on Flers, 15th September, 1916”. Also around the outside are a few story boards which explain about the New Zealand involvement. It’s probably a good time to be visiting the Somme as there are less tourists so there’s time to sit and ponder. 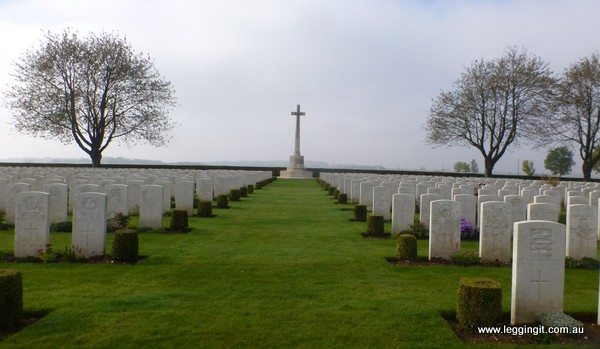 Between Longueval and Pozières I also stopped off at Caterpillar Valley Cemetery. As over half of the soldiers of the New Zealand Division who were killed on the Somme have no known grave their names are recorded here. On the wall surrounding the cemetery is the New Zealand Memorial to the Missing in the Caterpillar Valley Cemetery. It’s here that the names of over 1200 New Zealand soldiers with no known graves are recorded. It was from this cemetery that New Zealand’s unknown soldier was exhumed and reburied in their National Memorial. It’s amazing that in 1914 the population of New Zealand was one million and yet over 120,000 people enlisted.
Returning to Pozières I briefly stopped at the Windmill, which in 1916 was converted by the Germans to a fortified defensive position known as hill 160. It seems hard to believe but thousands of Australians were killed or wounded trying to capture the German positions around here.

These days the ruins are a memorial to the 23,000 Australians who were killed or wounded in the battle for Pozières.
There’s an inscription on a stone bench which reads “The ruin of Pozières Windmill  which lies here was the center of the struggle in this part of the Somme Battlefield in July and August 1916. It was captured on August 4th by Australian troops who fell more thickly on this ridge than any other battlefield of the war”
Heading out of Pozières on the other side of the ridge, another memorial marks the spot where Australian troops fought fierce battles at Mouquet Farm, (which they nicknamed Moo Cow or Mucky farm). On the side of the road a brass plaque commemorates the AIF’s efforts, where after taking Pozières they fought for a month until relieved by the Canadians who also fought for a month before  capturing the farm.The AIF suffered 6,300 casualties during ferocious fighting at the site in July through to September in 1916.
Only a few km’s away was Thiepval with a few significant sites but my time was up and to be honest I was emotionally drained. Actually I was on empty.
It was a pretty slow trip back to Amiens where I met up with Michele and the girls who had just had a “Chill Out Day” (which are so important when you’re always on the go).
Our time catching up with Val and Sandra was at an end and it was so good to hear about their travels through Europe. As Val was keen to have a ride on the Princess I happily volunteered to take her for a spin around the city. It was interesting having a different pillion after over a year with only Michele on the back and Val was a natural. The weather was pretty mild so it was nice just riding around the streets. After dropping Val off we all said our goodbyes and headed our separate ways. Tomorrow we head to Troyes.

3 thoughts on “Australian Battlefields on the Somme”