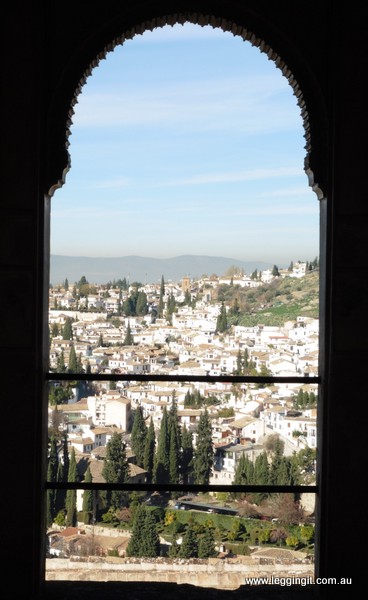 Today was the day Michele has waited for we were visiting the Alhambra, after seeing a picture a few years ago she had been keen to visit and we were finally here.

We walked up Gran Vio and caught the C23 bus from the Isobel the Catolica statue which cost €1.20 each. The bus wound through the little streets and alleys up to the Alhambra stopping outside the main entry. The tickets cost €14 each and the audioguide is another €4. We were lucky it was off peak generally you need to prebook your tickets online,

From the time we purchased the tickets we then had 40 minutes to walk from the entry to the Palacios Nazaries (Nazrid Palaces). Just past the entry the road splits with Generalife straight ahead and the other palaces to the left. The road to the left took us over a bridge through the defensive walls and down past the Medina. These days the Medina is just a ruin, but the defensive walls are intact as are the buildings which are part of the convent. In front of the convent are some sculptured gardens which the gardeners are busy planting for winter. The pathway leading down to the lower castles are lined on either side with hedged pines with archways cut into them which are quite stunning. Today security and police were crawling all over the Alhambra as the 5 plus 5 Defence meeting was on. There were guys with trench coats and black sunglasses talking into their sleeves. Ron almost walked into one of the Army chiefs which would’ve been embarrassing.

We arrived at the entry to the Palacios Nazaries with 15 minutes to spare, and waited, Ron was happy because he managed to find a coffee machine but I wasn’t so lucky because it had run out of milk.

The gate opened right on 10.30 and we were let in and then had to wait another 15 minutes. By this stage we’d had our tickets checked three times.

After getting our tickets checked twice more we entered the Palace, and it was stunning. The Alhambra was started in 1238 by Mohammed I al-Ahmat, who founded the Nasrid dynasty, and successive sultans added to the fortress. During the 1300’s, the heyday of the Moorish Sultans, three palaces were built. The Mexuar, Comares and finally the Palace of the Lions. The Nasrid’s were to rule until the second day of 1492 when Isobella of Castile and Ferdinand II of Aragon conquered the Alhambra.
They set about repairing the damage and the Arabic styling remained throughout with small additions. Despite the age of the buildings the Arabic art in the tiles, was still absolutely stunning. As it was forbidden to depict living things in their designs the use of geometric patterns and arabic script is breathtaking. The curved false ceilings with plaster designs is unlike any we’ve seen before. Throughout the palace the courtyards have fountains with long pools to draw the eye and catch the reflections of he buildings or simple fountains to aid contemplation, some quite simple but very effective.

Alcazabar is the military part of the Alhambra with the remains of the Military Barracks, fortress walls, and watch towers with magnificent views of the city far below. Entry is via a pathway below two imposing square towers which winds around the bottom of the battlements.

Generalife is a palace with a series of beautiful gardens and water features. Long hedged gardens with statues and water features which draw the eye, secret gardens. It’s quite a beautiful contrast to the earlier palaces. The architecture is different of course with a more modern style with whitewashed walls, long pillared verandas and arched windows.

There’s also a terraced garden with lovely sitting areas and a stairway which features fountains on each level and water coursing down the tops of the outside walls in drains as part of the feature. It’s quite unusual.

The walk back to the entry was quite nice with long tree lined avenues and lovely views back over the city and up into the surrounding hills.

We caught the bus back to the city where we stopped off at a little local restaurant for lunch. It was chaotic with a small room jampacked with diners. The food was great and we finally had an awesome paella with lots of flavour.

Not far from the Grand Via is the Royal Crypt. The chapel is quite high with Renaissance style ceilings. The carvings behind the main altar are quite stunning and a little graphic with a few bible scenes. Beneath the floor in dark wooden boxes lie seven of the Spanish royal family’s bodies. It’s not very ornate after the magnificence of the chapel.

In the adjoining rooms are various items belonging to the former Royals such as a tabard style dress worn by Isobella and a cape worn by Frederick. They are both made from silver thread and seem quite heavy with designs and pictures stitched into them and trimmed with purple cloth. There’s other items including art and Isobella’s prayer items which were quite unusual.

As the Cathedral was quite near we decided to pop in. It really is magnificent. It has high grand ceilings and is decked out in the renaissance style. The main altar is surrounded by many levels of balconies which house paintings of different religious stories. It really is quite unique. One interesting thing we’ve noticed in Spanish churches is the electric pay candles. Either to prevent fires, or stop people from burning candles for free, or simply because not everyone carries matches many churches have electric candles where you put your money in the slot and a candle illuminates for you. The bigger the coin the more candles, however for some reason it doesn’t seem the same. Many churches also have coin operated lights which light up the chapels, it is another way to make a few dollars.

As the sun set in Granada it seems the city comes alive. As it’s a university city it has lots of young people so it’s really vibrant and energetic. All the bars, restaurants and cafe’s are overflowing every night. However the Spanish love to party and we could hear them singing at all hours on their way home.

Tomorrow we head to Malaga.