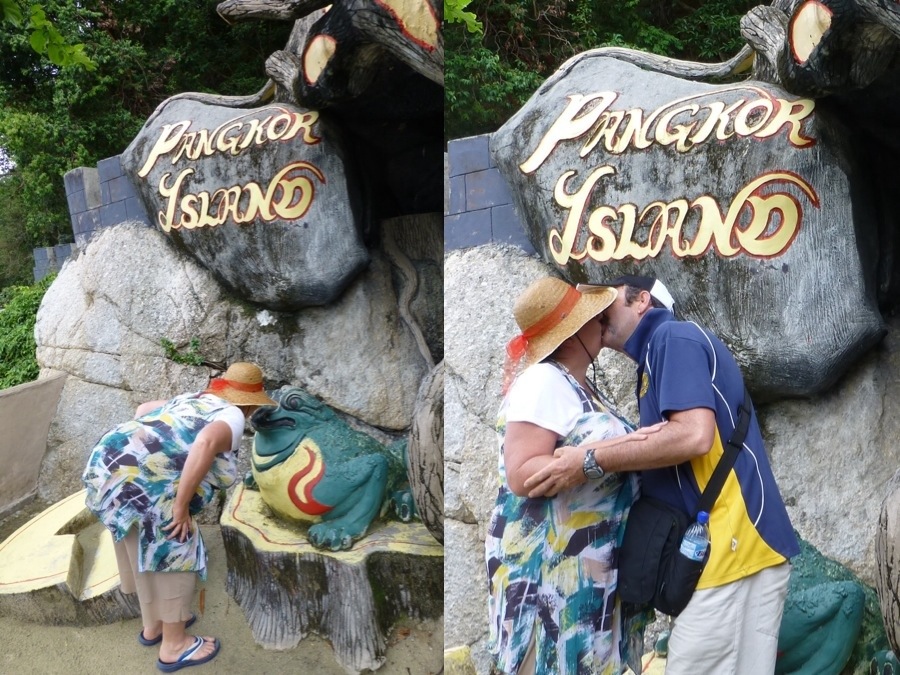 You know you are a traveller when you make plans and they change but you know you will have other opportunities.So just find another option for the day and enjoy it.

We missed the sunrise this morning, we made plans to get up early to watch it rise over the fishing village, but the sleep in was mighty enjoyable. The fishing village was buzzing this morning, which is funny for a place with two streets. On the main road restaurants, butchers, grocers and all sorts of vendors were busy preparing their goods for sale while people on motorbikes whizzed in grabbed what they needed and were off again. Apart from the motorbikes it could have been a scene from any Chinese village in the past.

We found a little restaurant fairly full of old Chinese men and a few old ladies, all talking ten to the dozen, all smoking and laughing whilst a lady at the front of the shop dutifully prepared homemade noodles. The locals invited us in and we sat and watched as people zipped up and down the street, ladies carried trays of drinks across the road to patrons at other venues, and as the chef at the next restaurant prepared a type of noodle with muslin cloth over a steamer. We ordered what everyone else was eating and a steaming hot bowl of fresh homemade noodles, with prawns, pork balls, beef, Chinese cabbage, fish, in a fish broth arrived. I can tell you now nothing beats fresh noodles for texture and taste because they were delicious. The locals asked us where we were from and we were given a pamphlet for the local festival (so that’ll be on the to do list).
We had a walk around the village and took a few photos of The Dog which is a mural on a number of houses done by a local artist.

We headed off to the Psychedelic temple, Lin Je Kong, Chinese Temple with Mickey Mouse, Donald Duck, a Mermaid, Giant Mushrooms and a few other quirky statues. Don’t be fooled people’s this is just an attraction for kids but the little temple at the top although small is the real deal. We met a nice man who explained to us a bit about the deities of the temple, and the significance of the coloured paper we saw people burning at temples all over the place. It was pretty interesting, the papers are prayers for prosperity, good health, and family. As he’d already unwrapped the paper, we decided it wouldn’t hurt to burn it and some incense, and say a few prayers for our families.

As the temple was at Coral Beach Michele decided to walk along the beach. the morning was beautiful with nobody about (its great being non tourist season). We then took a ride to Tiger Rock, a local landmark near the Old Dutch Fort. The story goes that a Dutch girl was taken by a tiger in the area so they carved a picture of a tiger with a child in its mouth and the Dutch East India logo VOC beside it.
Back to SPK for lunch to find we were either too late or restaurants closed. We met the local hairdresser we’d met last night and had quick chat (this island is a small place) We stopped at a local place for fish curry and rice,(a fish about the size and as boney as a Herring covered in curry sauce) Michele politely pushed hers over to me, oh well waste no want not. We had another look around town and I found my favourite dessert and made a new friend. Last year in Hoi Ahn, Vietnam I fell in love with Dau Hu, Soy pudding with ginger sauce (the consistency of smooth junket with the warming feel of ginger mmmmm) Well this is the Chinese version, same dog different name. As we road into SPK later she waved, she knows I’m hooked.
The day started heating up so we hit a tiny secluded beach at Pesar Bogak just the two of us. The shore break was a bit annoying so after we cooled down we headed to another beach. We had a ride around some of the back streets of the tourist areas and found most of the resorts absolutely abandoned. We decided to pop into Daddy’s again for some more delicious Satays, fried bananas and a cool drink. Once again there were only a few people around, a couple we met on the ferry and a pair of bright red Frenchies lying on sunbeds trying to see how sunburnt they could get before being hospitalised.

After lunch we found another deserted beach at Teluk Delam and cooled off again, cautiously keeping one eye out for macaques and ready to run and retrieve our gear at the first sign of them.
The bike was running low on fuel so we put RM 3 which put the gauge on 3/4 tank (dammit I was going to return it empty, just the way I got it) before returning to the guesthouse for a shower, a bit of washing and a bit of chillaxing. You know you’re a traveler when you give things a sniff and think yep good for another day. 🙂
Just on dusk Joyce led the way through all the tiny back alley ways on motorbike, with us behind which was heaps of fun. She took us to a local temple where each evening they feed wild boars that come down out of the forest. There were three large ones and three little striped piglets that were so cute. The pigs were a bit skittish, but they came very close, which we were told is very strange. One old man came down with his whistle to call them but we told him they’d eaten and left. We felt a bit sorry for him because he comes every night to feed them.

We then visited the old open air theatre which would have been fabulous in its day right in the middle of the houses. There was also a Buddhist temple close by which we had a quick look around, and were surprised there were no statues. We were told they practice a different form of Buddhism.

Our day ended at the corner restaurant where Michele picked out a number of different oddities to be cooked whilst I headed across the road and with Joyce’s help chose all sorts of fish balls, tofu, rice noodles and things to cook in a curry sauce by pointing. Joyce and her husband joined us for dinner and we had a great chat.

Meanwhile the sound was pumping from the stage behind the restaurant with different female singers dressed in fishnet stockings belting out songs in Chinese, loud enough to wake the dead.The locals surrounded the stage either sitting in chairs or astride their motorbikes. Strangely enough there were more men watching the show,( obviously purveyors of fine art) Across the road the cooked pigs started to arrive on the back of motorbikes at the temporary temple (a big marque) where tables were covered in plates of food, and people were popping in and out burning joss sticks, prayer paper and praying. We even saw our mate from the psychedelic Temple(I told you it’s a small island) This activity is all in preparation for the opening of the gates of hell (the hungry ghost festival) when all the souls come out to feast.
I wanted to stay on and enjoy the music but the two girls decided it was time to go so we headed home. I must say we’ll be sad to leave this place, it’s really homely. Ron

One thought on “You know you’re a traveller when…….”