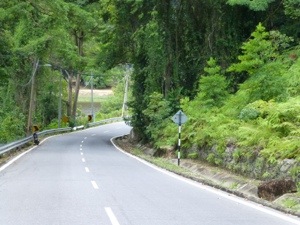 Lazy start today with the biggest decision being whether to go for a swim first or have breakfast. Swim won so we went down and enjoyed that before heading up to get ready for breakfast. There was a beautiful red Asian sunrise this morning, it gave a real tropical feel to the day.

We then headed down for breakfast and enjoyed the feast that laid before us
The resort Orient Star in Lumut is quite good value we thought.
A short 5 minute stroll had us at the ferry ticket counters. One lady was waving through the middle window, to get us to buy off her but I had heard that M were the best ferries as they had outside seats so we bought tickets off them but soon found out all tickets were for the same ferry. The ferry was absolutely chockablock when we left with lots of local families there were heaps of kids chattering away and squealing with excitement as we crossed the bay. Ron had a bit of reminiscing as we passed the Navy base, tunes we’ve sung before.

Our first stop was SPK where we stopped to let a few people off, then on to Pangkor town, the whole trip only taking 30 mins. When we arrived we started walking, but as we had no map, it was heating up and were going off a trip advisor comment we soon made the decision to turn back and hire a motorcycle and at RM40 per day for a brand new bike it was really cheap. Ron headed off with his luggage to find the hotel in the direction that the hire shop told him and I found a really nice cafe to have a drink and wait. The cafe had WiFi so I got directions, texted Siobhan to text her father (he of course had his phone in his pocket and was oblivious). Eventually after doing a lap of the island he returned and upon seeing the map did a luggage run to the Guesthouse and returned for me. He had a quick lunch of Seafood Nasi Goreng and Teh Tarek and we were soon on our way arriving only minutes later (it was at the end of the wharf in SPK). The guesthouse was wonderful, in an old shophouse located in the fishing village, the only one in town and one of only a few on this side of the island. We met the owner Joyce and she was wonderful. We had tried booking online but the booking agency was asking for all sorts of numbers, and details which i wasn’t completely happy about and finally I’d had enough so just crossed my fingers and hoped that she’d made the booking.
Luckily she had vacancies and we were set up in a quiet room at the back.

We dropped our bags off and Joyce gave us the tourist rundown of the island, map, the best places to eat, swim, temples etc. Then it was time to mount up and move ’em out. I tried to talk Ron into wearing his helmet but he pointed to the sticker on the back of his helmet which read Not for Motorcycle use, so I lost that argument. I looked at mine and it had the same sticker and I thought “what the hell” so I was a rebel as well.

On our travels we stopped at a boat building yard where they are building fishing boats out of wood, a Chinese cemetery with traditional horse shoe shaped graves, we saw a traditional wedding ceremony procession leaving the mosque walking down then road. It was quite a sight and many odd the guests were happy to pose for photos.

it was on to a Chinese Temple, which has a miniature model of the Great Wall of China it’s probably called the “Not so Great Wall of China but heaps cheaper Wall of Pangkor” or something like that. It’s a great temple really traditional set into the side of a hill leading up into he rainforest. They’re building another temple up the hill a bit and when it’s finished it will have excellent views. We cruised around he island checking out the beaches. We stopped at one beach for a walk along it and I spotted some Macaque’s not far from where we parked the bike and sure enough as we got further down the beach one was up on the bike checking out the parcel tray to see what it could steal.
We then sent the remainder of the day riding around checking out the local beaches and of course stopping for a drink until 630 when one of the local resorts feeds the hornbills. We turned up and so did many hornbills but sadly the feeders did not so there were some very disappointed birds.

Back along the coast to enjoy a drink while we waited for the sunset but we decided it wasn’t going to be a good one so headed towards home, we got diverted by a heap of people in a vacant lot racing remote control cars, there were heaps of people stopping to watch and the cars were flying past also saw some spectacular crashes.

We then looked up and saw the sunset so back on the bike to the beach to watch the sun go down and then onto a local Chinese restaurant for a seafood dinner, Ron had some really spicy prawns with a heap of dried chillies and I had egg and pepper squid. Meals were delicious and cost just on $10 which we thought was a bargain.

Back on the bike and we started heading home as the raindrops started falling, it is now pouring down and we are ready to hit the hay.

One thought on “Breakfast in Lumut then Back on the Bike”