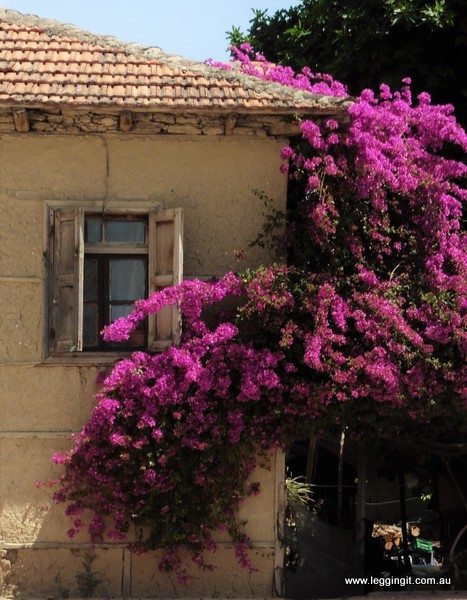 Today was our final day in Uzumlu, so after packing the bike we headed down to Eddies place with Sandy for breakfast. Walking through Umumlu at 9 o’clock we were surprised at how many restaurants were closed. Over the weekend Uzumlu staged the Uzumlu Mushroom Festival, so all the restaurants were packed with patrons so everyone was working long hours. Arriving at Eddies place we also found it closed but not for long for Eddie soon was opening the gate. A hearty English breakfast was the perfect way to kick off the day and Eddies place is supposedly the best place in the village. We’ve been here a few time for breakfast and they’ve been top notch.
As we headed out of Fethiye we couldn’t help but notice the hundreds of hothouses which surround the city. When I was looking down on Fethiye a few days ago from Kalyanda I was surprised just how many there actually are. The D400 runs through the centre of the valley formed between the coastal mountains and the interior. It passes through some great looking farmland covered in fields of wheat, canola, fodder, olives, almonds and oranges. The road towards Kas winds through low hills covered in pines and it was a really pleasant ride. As it was a sunny day we had to play dodge the Tortoise, as it seemed all the tortoises were warmed up and on the move.
As we came over the rise into Kinik we were just amazed at the sea of hothouses stretching out in the valley in front of us. The road passed through Ova before winding up through the hills and onto the coast. We stopped for a drink overlooking the coast at Kalkan and the views were just magnificent. 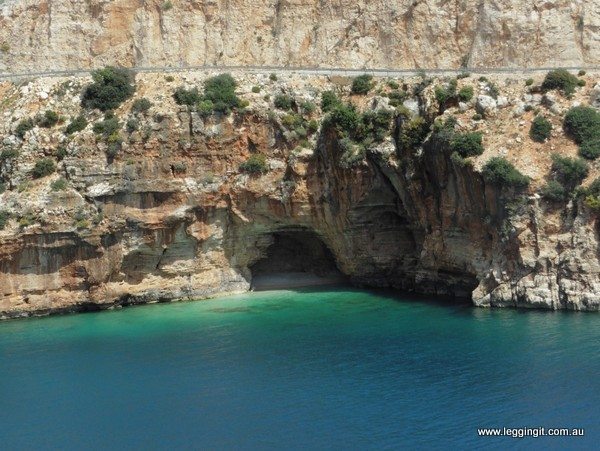 The ride along the coast was just breathtaking. There was not a breath of wind so the azure water was like a mill pond. The road hugged the coast ducking in and out and we had views of little beaches with crystal clear water. It was so inviting. 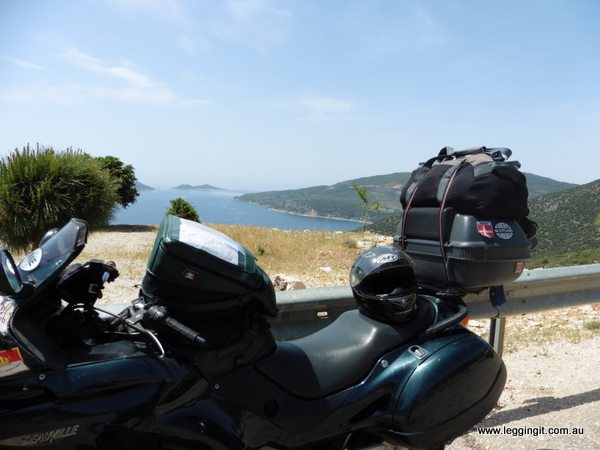 We were reminded a bit of some of our rides along the coast of Croatia with the little coves, and views across to nearby islands. 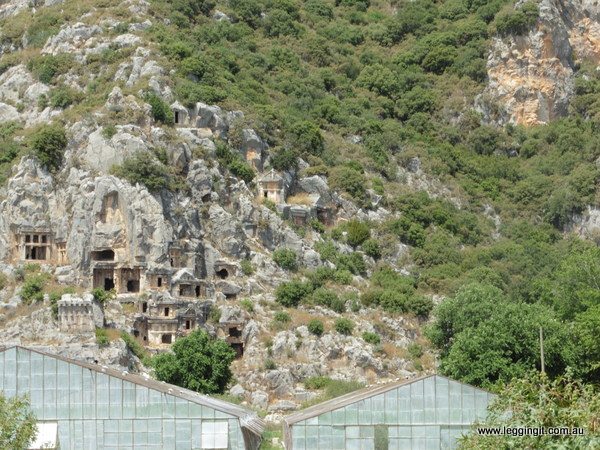 Eventually we made it to Demre and we were surprised at all the tall apartment buildings. The styles reminded us a bit of Morroco. As we entered the city we passed Roman and Lycian ruins. Demre was the former Lycian city of Myrna and in the hill not far from the city centre are Lycian Rock Tombs, pillared sarcophagus, a theatre and various buildings. We took a quick look from the road before retracing our route through the centre past a number of ancient sarcophagi on a round about. The road out of town winds around a large estuary with a few beach shack type restaurants which looked really nice. 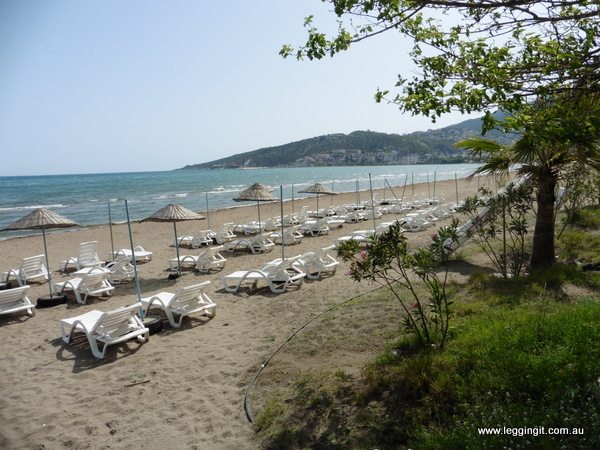 The final thirty kilometres into Finike was a nice run with more winding coastal roads, and great views of beautiful little beaches. As we arrived in Finike it looked like a really chilled place with beach restaurants and cafes. Finike in situated on a long beach with a long strip of five storey apartments and hotels facing the beach. Behind the buildings hundreds of acres of orange trees (which Finike is famous for) and greenhouses spread across the valley.

After checking into the hotel we found a little restaurant nearby overlooking the beach to enjoy a simple lunch. It was enough to recharge our batteries for an afternoon exploring around Finike.

The ruins of the ancient Lycian city of Limyra are only a few kilometres from Finike. The ride out to Limyra took us through the vast orange orchards which the city of Finike is famous for. Along the road to Limyra there’s lots of Lycian rock tombs visible, some very close to the edge of the road. At Limyra we parked up and took a look around the Theatre. It’s actually one of the better preserved structures we’ve seen. On either side of the arena area are vaulted rooms which would’ve been used in the performance. Along the top of the theatre a vaulted corridor runs the length of the structure which gives a real insight to what the theatre would’ve looked like. 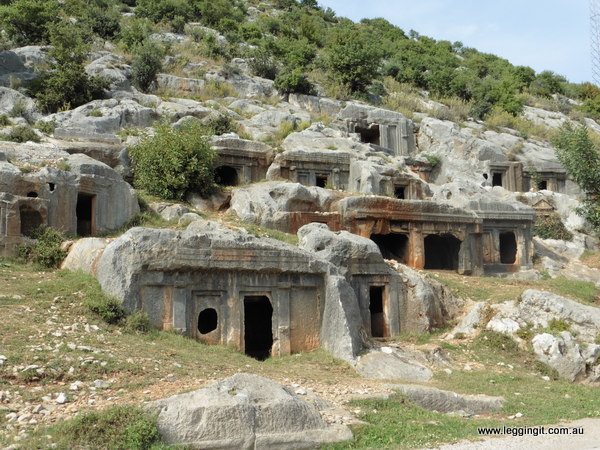 Across the road the ruins of a number of buildings are still standing, along with some of the city walls. After fossicking around the ruins we continued to ride along the road finding more and more Lycian rock tombs. After a few km’s we headed back along the route we came in on and misunderstanding Michele’s instruction’s went straight across the D635 intersection into Turunçova. A heavily potholed road led through lots of greenhouses into the centre of the dusty town. Turunçova is an interesting contrast to nearby Finike with all it’s lovely multi storey beach side hotels and restaurants. Throughout Turunçova there were lots of old houses many of them using the frame and brick methods of the Middle Ages like the Tudor style houses. 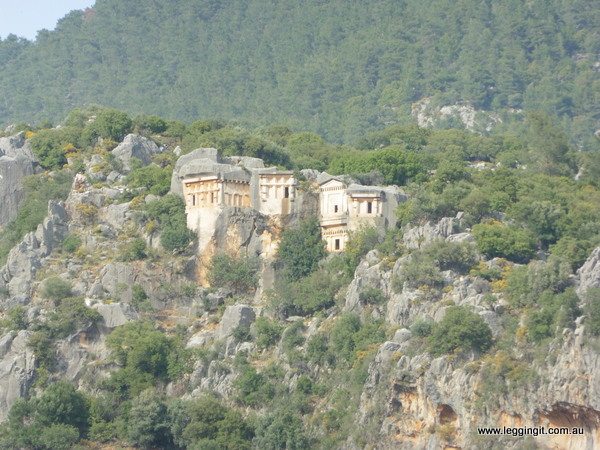 The detour into Turunçova also gave us a view back across the river to the royal tombs high on the hills. If we would’ve stayed on the D635 we would never had seen them.
The road up through the valley ran parallel to the D635 until eventually reaching a bridge where we were able to get back onto the main road. After a quick run up through the hills we called it quits for the day and headed back to the hotel. Tomorrow we head to Antalya where we’ll spend a few days exploring the area.