Well the winds came yesterday, but the only thing that affected us was the smoke being blown back down the chimney to fill the apartment. Our two days in Šibenik weren’t as productive as we expected with our first day spent at Krka National Park and yesterday dodging the rain as we checked out the old city. 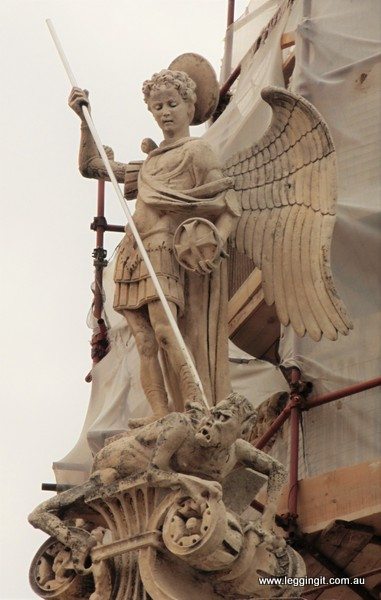 The cathedral was interesting as supposedly it was built without mortar. Work on the cathedral was started in the 1431 and completed in 1536 using local limestone and marble from the island of Brać. It also has a curved barrel type roof made entirely of stone which is also quite unique. The Cathedral was undergoing repairs so there were lots of scaffolding covering the altar transept area. The portal of the Cathedral is flanked by very simple statues of Adam and Eve atop pillars resting on the backs of two lions. The archway is a little reminiscent of the portal of the Trogir Cathedral. Also around the exterior of the Cathedral are heads of different personalities which see to be protecting the corners of the building. 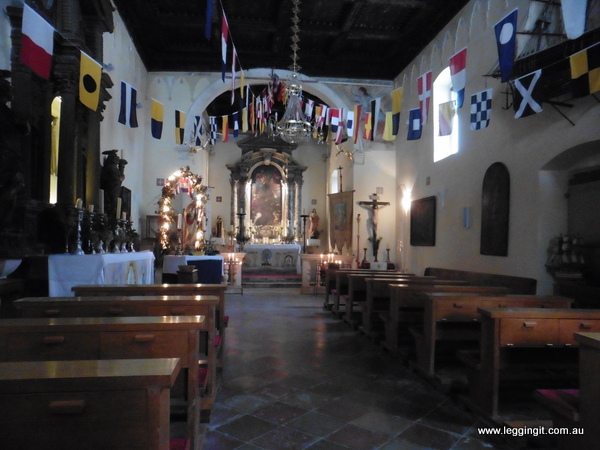 The most interesting building for us in the old town was actually St Nicholas Chapel. It’s a tiny chapel filled with model ships and ships communication flags hanging from the ceiling. The statue of St Nicholas was surrounded by a floral wreath and lights giving it a strange otherworldly appearance. 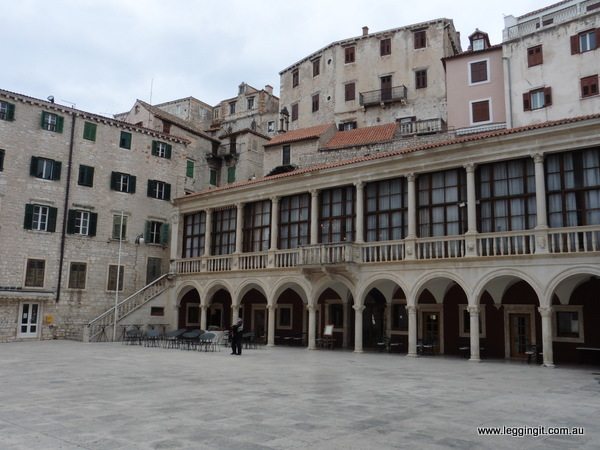 The weather was pretty depressing so after a quick visit to the centre of the city and of course a pizza we headed back to the apartment.

Hopefully next time we visit Šibenik the weather will be kinder. Today however, the sun was shining as we loaded up the bike (that’s the royal we of course) and headed for our ride from Sibenik to Rijecka. It interesting heading back along roads we’ve already ridden, seeing the country from a different direction and in different weather. This stretch of coastline was our favourite in Croatia as it has lots of winding roads and views across to the islands. It’s truly spectacular. 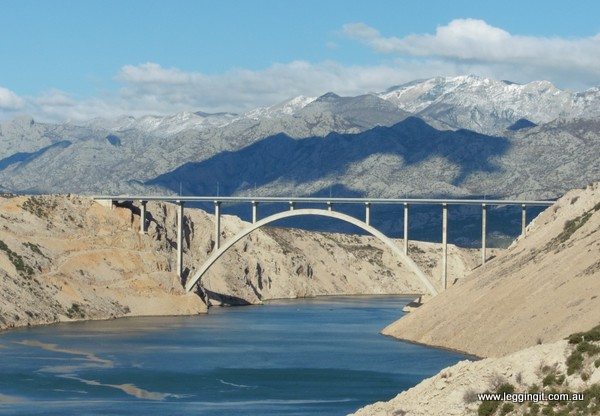 Today’s ride however was a bit more businesslike as the gusty winds made riding quite treacherous. More than once the wind blew us across the road or dropped off whilst cornering causing the bike to step out a bit. Our first stop was on a lay-by overlooking the islands. It was a great spot which was quite exposed so I had to keep leaning on the bike as the wind threatened to blow it over. 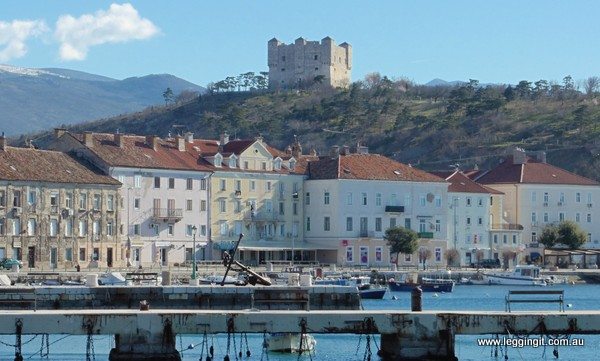 We quickly ate our lunch and took a few photos before heading off. Our next stop was much nicer, as we decided to stop off for a coffee and to warm up at Senj. Riding into Senj the first thing which is noticeable is the Nehaj Fortress, a big square fort atop a hill, surrounded by barren fields. It looks a little out of place and its name Nehaj comes from the word Ne hajati “don’t care”. The Uskoks who built the castle, in 1558, gave it this name to remind people not to worry until their enemies were at their gate. The Uskoks were pirates who sailed the Adriatic with impunity and secured the town of Senj which was never conquered by the ottomans. The old town of Senj was walled much of which still exist today. The town became a partisan stronghold during World War Two and much of the old town was bombed.

In the middle of the harbour-side we found a coffee shop which allowed us to warm up and enjoy the views over the harbour.

The run from Senj to Rijecka was wild with gusts of wind battering us all the way. A special feeling came over us as we rounded the corner at Kraljevica and looked across the bay to Bakar, what a beautiful sight. Arriving at Rijecka we headed through the city to arrive at the apartment a few km’s north of the centre. The apartment was wonderful with a separate bedroom, kitchen and sunroom. This was definitely a great choice for a few days.

With the rain falling we settled in for the night. Tomorrow we check out Rijecka in preparation for Karneval.