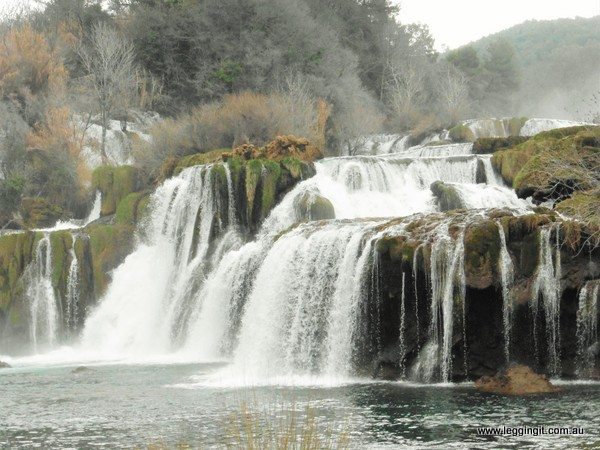 Surprisingly there was not a soul at Krka National Park when we arrived. It’s one of the great things about visiting Croatia in winter. No crowds. 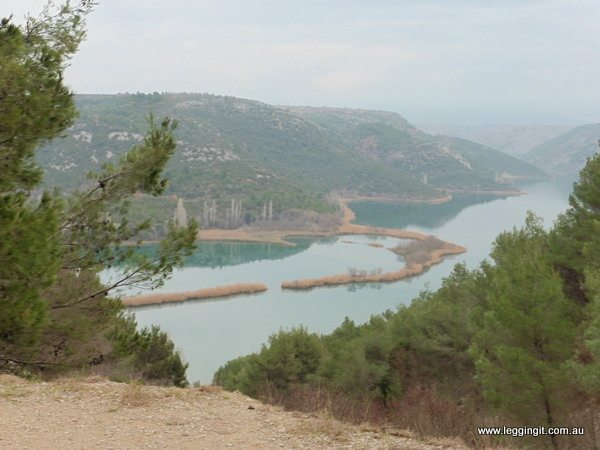 We headed to Skradinski Buk where we purchased our day tickets for $6 and although it was 10 o’clock we were told we were the first visitors of the day. The ride down the hill into the park gave us great views of the river and its layout. As we were the first visitors we had no trouble finding parking. Skradinski Buk is a series of waterfalls, the like we’ve never seen before. The river runs through a series of natural steps creating small and large waterfalls. 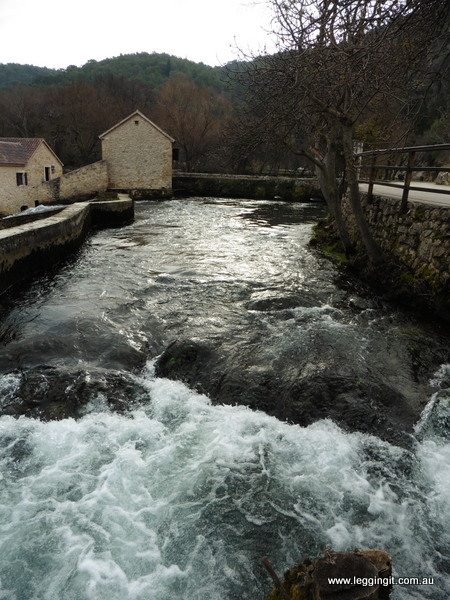 Along the southern edge a small village of old stone cottages straddle a small watercourse which was used to power waterwheels in earlier times. These days they’ve been converted to restaurants and souvenir shops. A two kilometre walkway winds through and around the waterfalls so we decided to take a stroll. 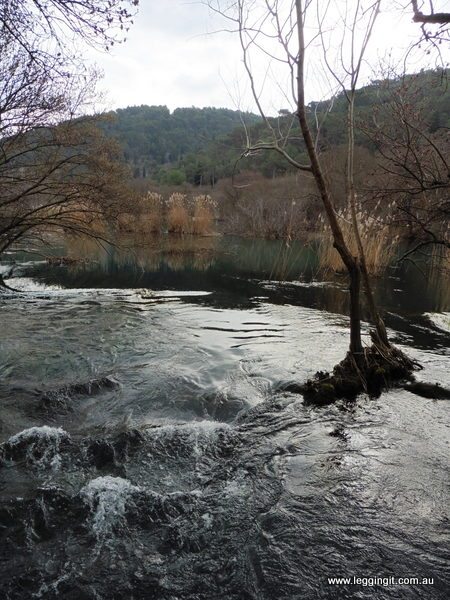 The initial section winds through a wooded area where due to the increased rainfall all the water levels were quite high so there were tiny waterfalls between the trees. It was just beautiful. 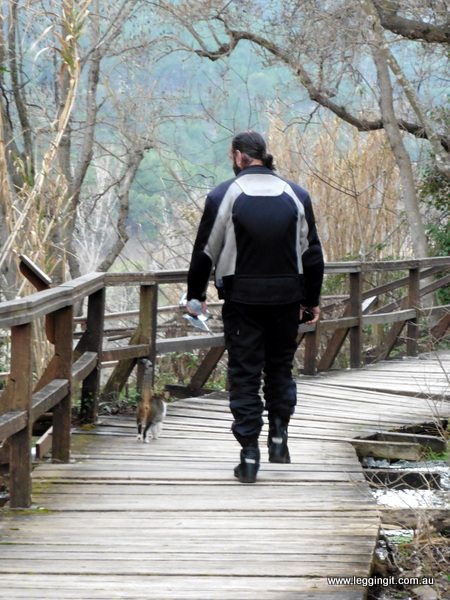 Along the way a cat suddenly appeared and stalked us for quite a distance. Along the way there were a few lookout points which gave great views over the different waterfalls. At the bottom of the river we crossed the bridge which led us back past the old hydro electric plant. The worlds second oldest recorded hydroelectric generation of electricity was produced by the old turbine here. It only missed being first by a few days. 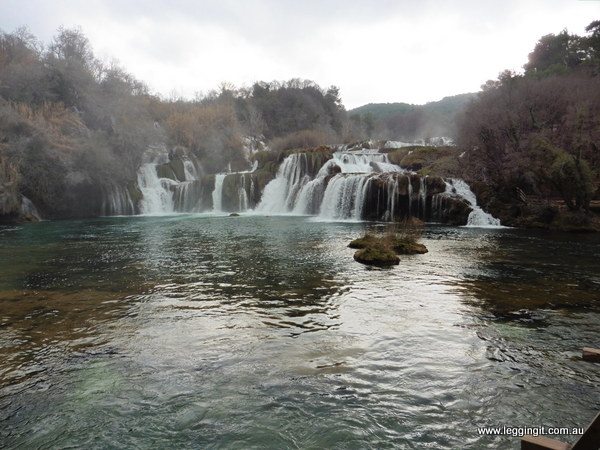 At the top of the waterfalls, a viewing platform “the Imperial Belvedere” dates back to Emperor Francis Joseph 1 visit in 1875. It gives a great view across the waterfalls. Supposedly when he visited,the hills were lined with people from all around the area trying to get a glimpse of him. He received a hearty welcome from the locals firing their pistols on the air and shouting “hurrah”. I don’t know if he was waiting until they’d run out of ammo, or was just impressed by the beauty of the waterfalls but it’s said that he stayed looking at the falls for a very long time. 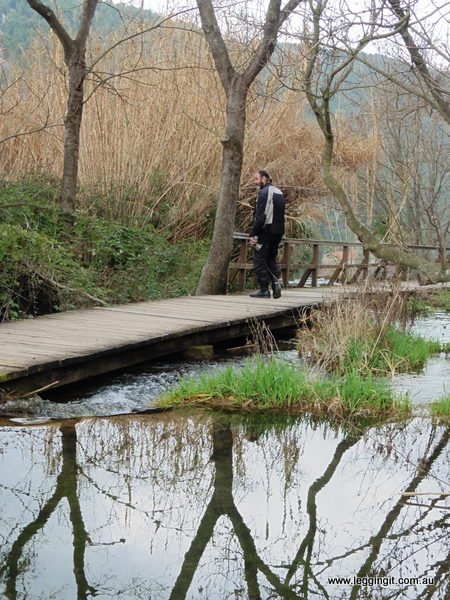 One thing that struck us was that how well thought out the facilities were for older people and the less mobile. A series of ramps allows access around the old village and viewing areas. Also across the first series of falls the boardwalk is also quite accessible. 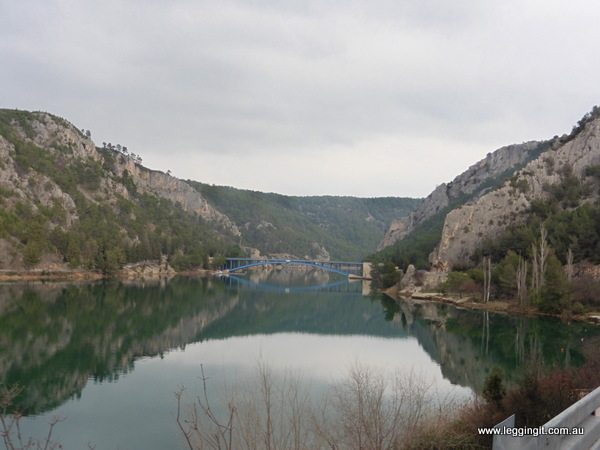 The park pass allowed us access to other parts of the park so we decided to head towards Roški Slap. The road took us along the escarpment overlooking the Krka river before winding down into Skradin. The town looked pretty rustic with old stone buildings and churches so we decided to stop for lunch. 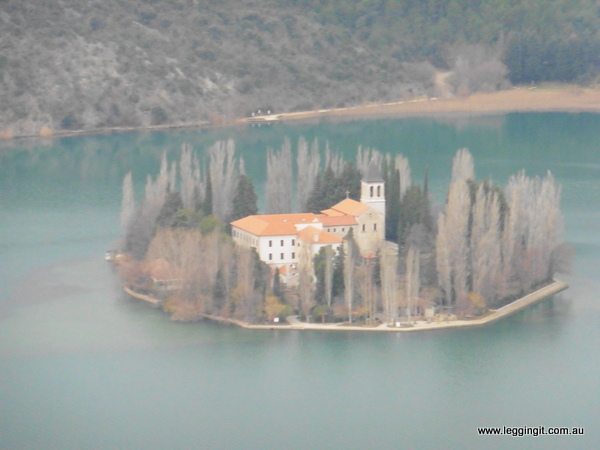 After lunch we took the road towards Roški Slap taking a detour to the river to get some photos of Visovac Island. During tourist season boats run from Skradinski to Visovac for tourists to visit the Franciscan Monastery of our Lady of Mercy which dates back to 1445. Another boat travels between Skradinski and Skradin.
The road to Roški Slap wound up through a few small villages where the occasional local would look at us a little surprised whenever we passed. 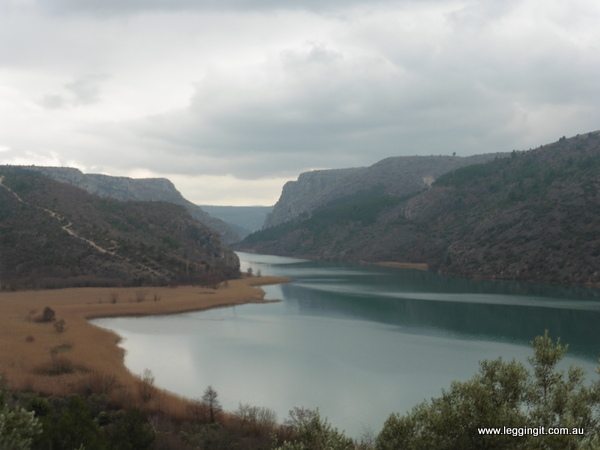 By the time we reached the top of the escarpment the rain caught up with us. It wasn’t heavy just light misty rain, like tiny ball bearings making it impossible to ride with the visor up. We wound our way back down the escarpment to Roški Slap where we decided that with the forecasted storms now approaching we’d best head for Šibenik. If the weather is ok tomorrow we’ll head back out to checkout the other waterfalls of the Krka National Park.

We wound our way back up the escarpment and headed on to Stinice to take in the views over Krka River to Visovac Island. The colours of the river is just magnificent. With the rain falling lightly we headed for home. Tonight there’s a forecast for “the Bura” the local wind which brings gusts of over 100 kph. Time to batten down the hatches.