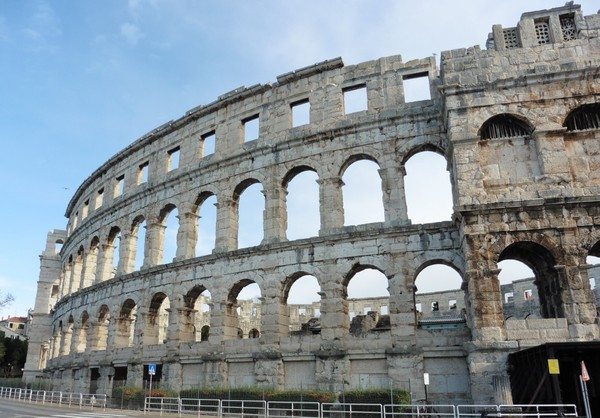 One thing that you can’t miss when visiting Pula is the Pula Colosseum. Supposedly it’s the sixth largest Roman Colosseum and the most intact. When the Romans arrived around 31 BC one of the most important structures they erected was of course the Colosseum. The Colosseum was all sorts of things to all sorts of people. It was a place where public announcements were made, a place of entertainment for the masses, a hub of roman culture, a place where the powerful held sway over life and death. More than that, it sent a clear message about the might and power of Rome. The stone tablets on the wall as you entered the colosseum reinforce the message to everyone of the emperors power. 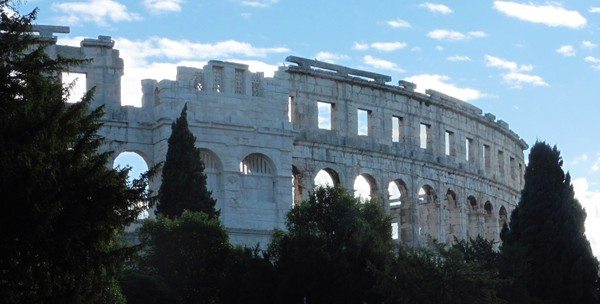 Two millennia later it’s still a pretty imposing structure. It also stands as a monument to the craftsmanship of the original builders with all the exterior walls still standing. We parked the bike across the road and took a look around. The entry fee of 40 Kn (8 Aud) was pretty reasonable and we were lucky to arrive when there was only one other couple. It was like having the place to ourselves. 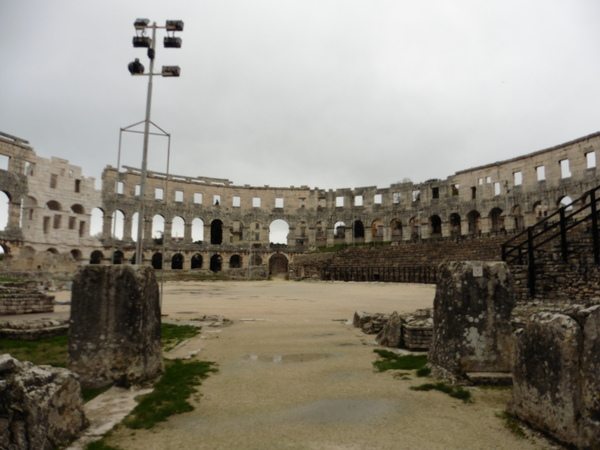 Inside it’s quite amazing looking at its sheer size. Supposedly in its time it seated about 25,000 people. These days some of the stands have been rebuilt and during the summer months concerts are held here. How fabulous would it be, on a warm summer night, to soak up the atmosphere of this place listening to music. 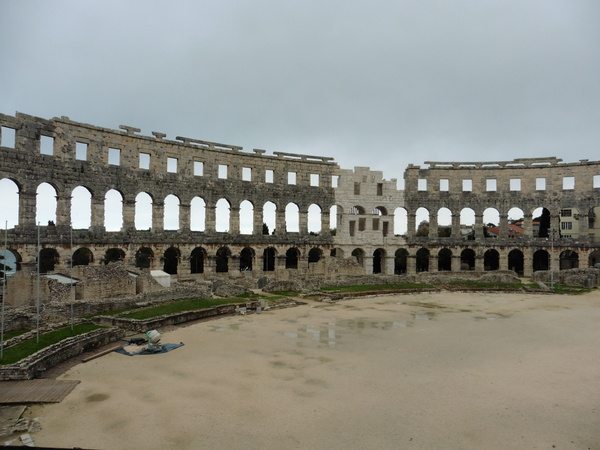 Michele got talking to a security guard who told us a little bit about the colosseums construction, conservation and layout. The colosseum has had some repairs over the years and it was interesting hearing a local view of the situation. The most extensive were during Mussolini’s reign when Croatia was governed by Italy. During this time the stands were rebuilt and some of the buildings were stabilised with concrete. Whether it was good conservation or not is debatable. However, the benefits are that different conservation methods can be compared over a longer time frame. It was interesting discovering and discussing different styles of tradesmen who worked at different times on the building. You could almost trace their origin just by the way by laid bricks. For visitors like us it means that today we can still enjoy the Colosseum, with some of the structures in place and not just an empty shell. 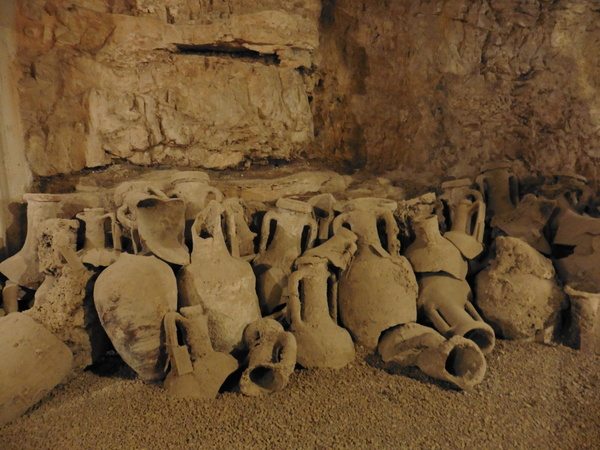 Beneath the colosseum is a small display on Olive oil in the region. There’s also some artefacts used in oil production such as olive presses and amphora retrieved from the sea around Pula. The Istrian peninsula has been an important area for high quality olive oil production since Roman times. Due to the milder climate in the area the olive trees produce higher oil content. Compared to other areas the olive oil was valued more as a flavouring, whilst olive oil from areas which produce more olives with lower oil content was used as cooking oil. A fact that locals still like to brag about. 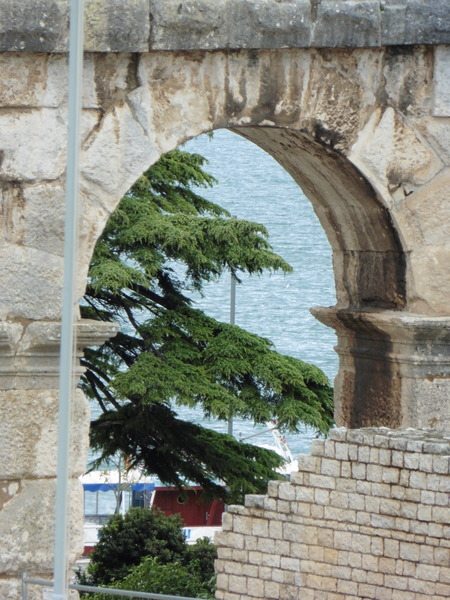 Heading back into the heart of Pula it’s easy to see the stamp that the Romans put on this city. From imperial arches, churches, forums, towers even the shape of buildings and building materials.
As the weather had changed and it had started to rain we headed back to the unit. Tomorrow we might look a little more around Pula