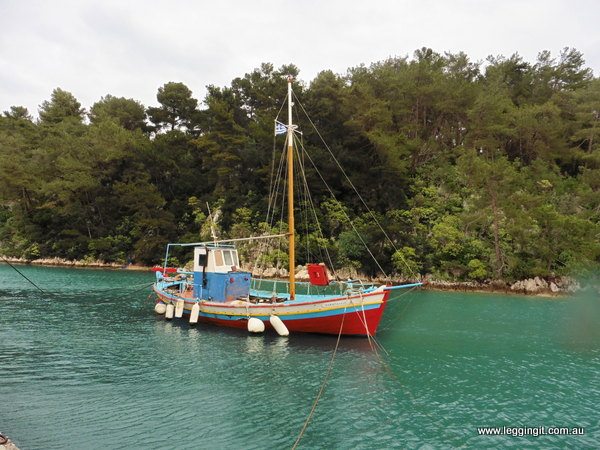 It was raining this morning as woke up and it didn’t let up. This is not how we dreamed of the Island of Paxos. It looked like it was going to be a wet day on the bike but Antigoni offered us her car. The generosity of the couch surfing hosts is amazing sometimes. 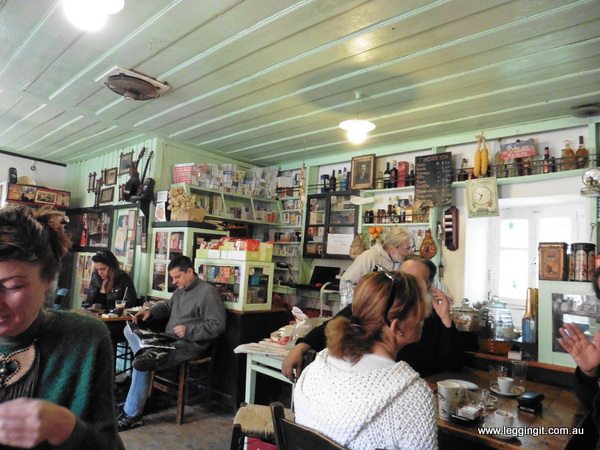 We started the day with a visit to Cafe Neo, which was packed with locals. There is something about this place which is quite heartwarming. Maybe its the crusty old guy who runs the place or the glass cabinets full of biscuits and other general items. 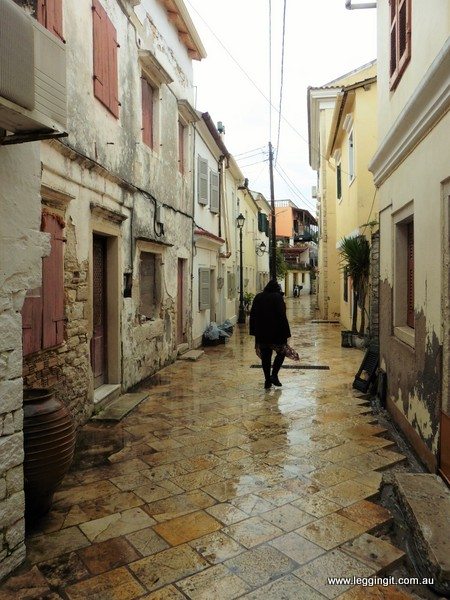 Afterwards we dropped Antigoni at her shop in Lakka and took a trip to Gaios. As Paxos is the smallest island in the Ionian group, and only 30 square kilometres in size that didn’t take too long. The roads on Paxos are fairly good but narrow so putting along at 30 kph was fast enough. Rain combined with olives on the road was another reason to keep the speed low. Paxos is a pretty island with a few hills and almost entirely covered in olive groves. The locals don’t prune their trees so they grow quite large. There’s a few small villages such as Longos and Lakka at one end and Gaios at the other. In between are a few small settlements with lovely little local cafe’s. at this time of year it’s the perfect place to get a local experience. 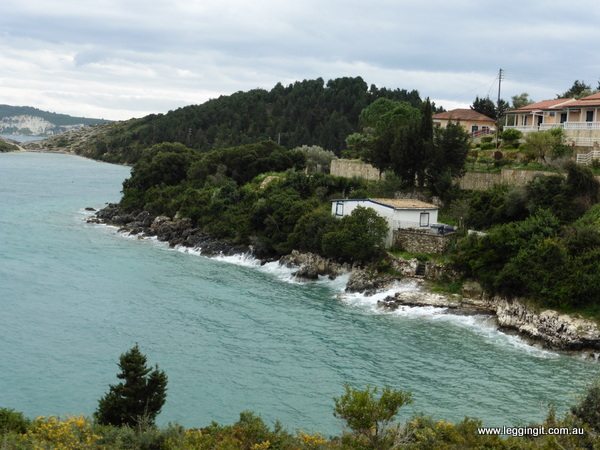 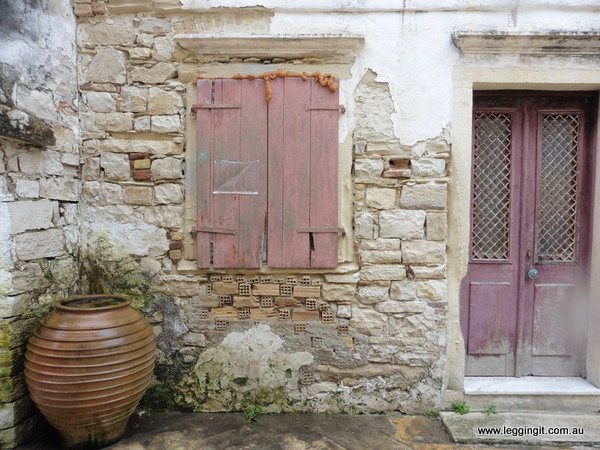 Returning to Gaios we took a walk around town. Gaios is set around a natural harbour with hills on one side providing protection and the islet of St Nicholas on the other. The town is quite beautiful with cobbled streets and old two storey buildings. The harbour had lots of small fishing boats riding at anchor which gave it a real Greek feel. It was the perfect spot to find a cafe to dodge the rain. Even though it’s off season on the island of Paxos, in Gaios there were a few cafe’s and restaurants to choose from. 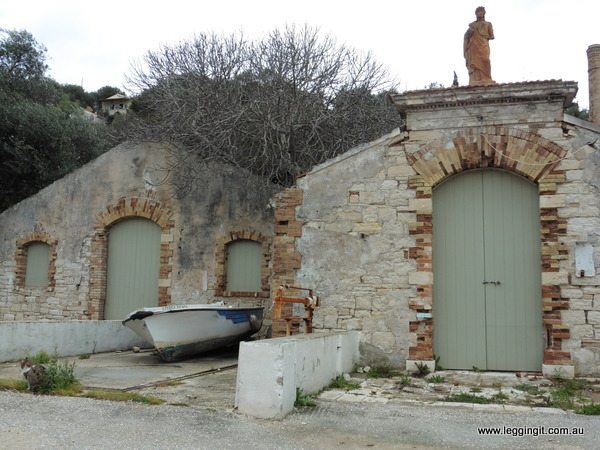 After a coffee we headed along the coast of Paxos past the port, through Kagkatika to the town of Longos. Along the way we checked out a few beaches and smaller settlements. Longos is a nice little town which also surrounds a bay. Lots of beautiful old buildings front the bay and it truly is a magical little spot. As there were no restaurants open we headed back to Lakka. 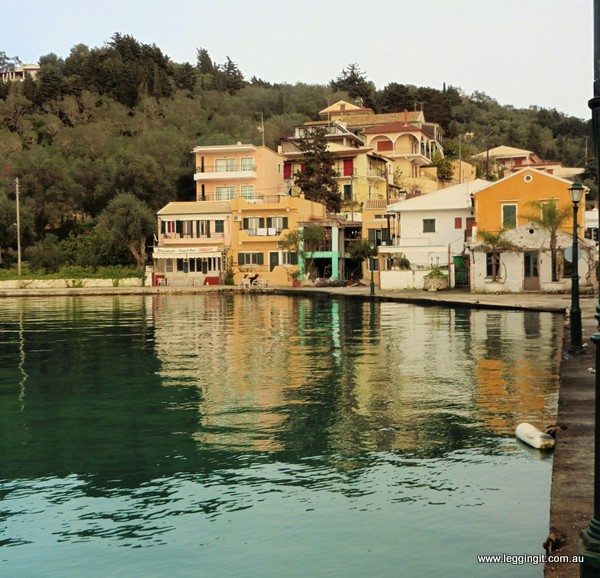 Lakka is probably Paxos’ most beautiful towns situated on a natural harbour. At this time of year it’s nice and sleepy, as the only people in town are locals sitting around in the cafe’s planning the tourist season. Lakka also has one of the most picturesque views across the harbour. In Lakka we caught up with Antigoni who was having a slow day at the shop and her friend Spiro. As they were locals they suggested a restaurant and joined us for lunch. We decided on a meze of octopus, vegetables, baked cheese and ouzo. It was a great afternoon spent chatting, eating and drinking. As we are on a Greek island we just had to try ouzo. The ouzo was served the traditional greek way with water and ice, giving it a cloudy appearance. We also tried a traditional greek drink called Retsina. It’s basically pine sap added white wine, producing a smoother taste. In days gone by good quality wine was used but these days cheaper wine is used. 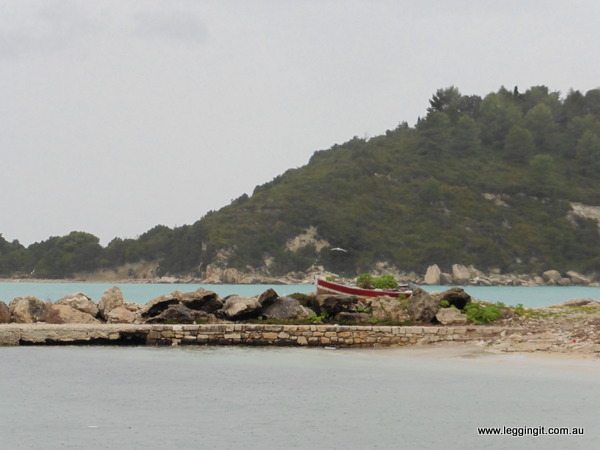 Late in the afternoon we dodged the rain to check out the town before heading back to Antigoni’s place for a rest.lol.
As it was our last night on Paxos we all headed back to Lakka, for dinner at a local restaurant overlooking the bay. Spiro joined us at the restaurant and we had a great night out eating local foods whilst drinking ouzo and rakija. It was great hearing about life on Paxos, local traditions and life in Greece. Even though we only knew Spiro and Antigoni for a short while we got on like a house on fire spending the night talking about all sorts of things. The setting was perfect, a small restaurant with a few tables filled with locals laughing, joking and talking loudly. Getting that local experience was just awesome.
It was pretty late as we headed back to Antigoni’s in a pretty happy state of mind. Tomorrow we leave Paxos and we are kind of sad to be leaving. It has been great spending a few days here. Paxos is a wonderful place to visit offseason and we really got a local experience at Café Neo and the local restaurants in Lakka.