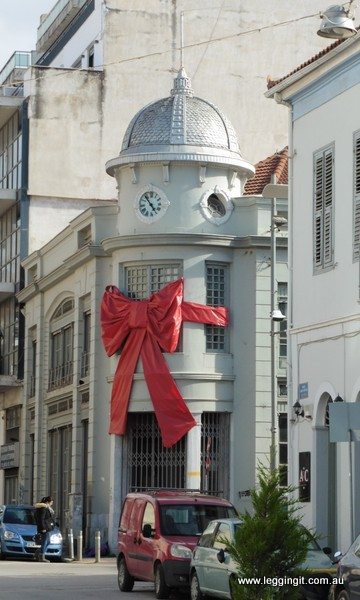 It was raining this morning when we woke up and it didn’t let up. Checking the forecast the rain was going to ease between 10 and 11 so we packed in readiness. Sure enough at 10 the sun emerged and I started packing the bike whilst Michele finished packing the last few items.
The roads were really slippery and water was laying everywhere in big puddles as we headed through Lefkada. Along the causeway and towards the heart of the town all the big wooden tour boats were tied up in readiness for the season. It really is a picturesque ride with cafes overlooking the water, boats and mountains in the background. As we came off the floating bridge at the end of the causeway we hit a huge puddle which just flooded my boots. It was not very nice to start the day in wet boots. 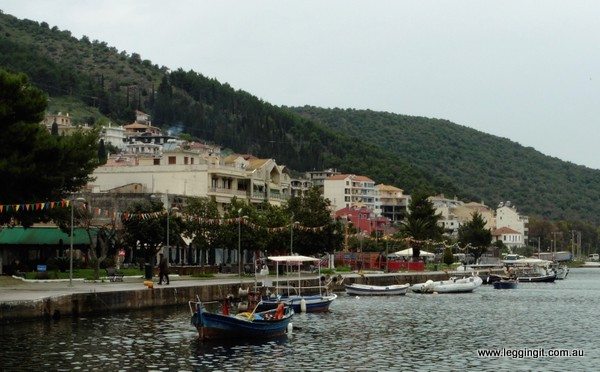 Just before the airport at Preveza we turned off and followed the E55 towards Venitsa. The countryside was a patchwork of farmland like a beautiful green quilt. The road traced the edges of the mountains heading into Amfilochias and we had great views of the bay.

We stopped off at Amfilochias for lunch of our old favourites chicken and pork gyros. The gyros were so good I had to have two. Whilst we were eating we witnessed one of the funniest examples of traffic chaos. 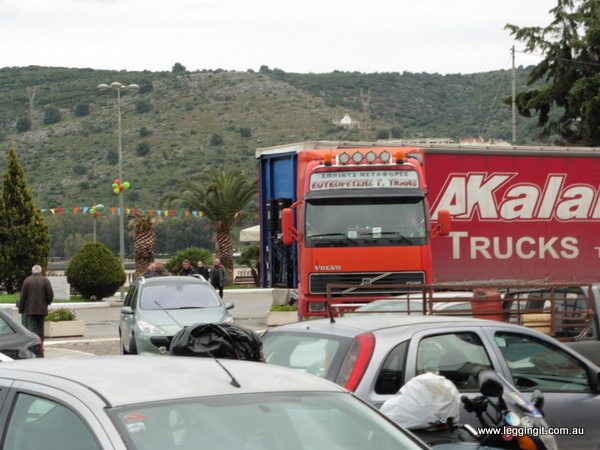 Right in the middle of Amfilochias the roundabout is the hub for all traffic heading to Lefkada, Patras and Chalkides. It’s so busy that it’s hard for pedestrians to cross the street. Well as it was lunch time cars started double parking along the street around all the restaurants leading up to the roundabout. Then we noticed people parking around the edge of the roundabout, which seemed pretty stupid. Sure enough the first truck that arrived couldn’t negotiate it’s way around the roundabout as a car had restricted its turning circle. Soon the traffics was banked up with everyone blowing their horns. The truck driver was going off his nut at anybody within earshot. After about five minutes of horn blowing the guy who owned the car wandered back as the truck driver let rip at him. It was useless because he didn’t have the car keys. His wife had taken the kids to grab some lunch. There was lots of huffing and puffing, arms going everywhere as the truck driver relieved some of the tension. In due course the guys wife wandered back with kids in tow, to receive her share of the truck drivers ire. It was hilarious watching her indifference to the whole situation.
Michele lived in Melbourne in the 80’s and remembers how the Greeks would double park their cars along Sydney Road, the old main road out of Melbourne, causing traffic to come to a standstill, whilst they popped in for a coffee.
The road from Amfilochias to Patras took us past a few lakes along the way and bays. I never realised how much water surrounds the Greek mainland, and just how mountainous it is. 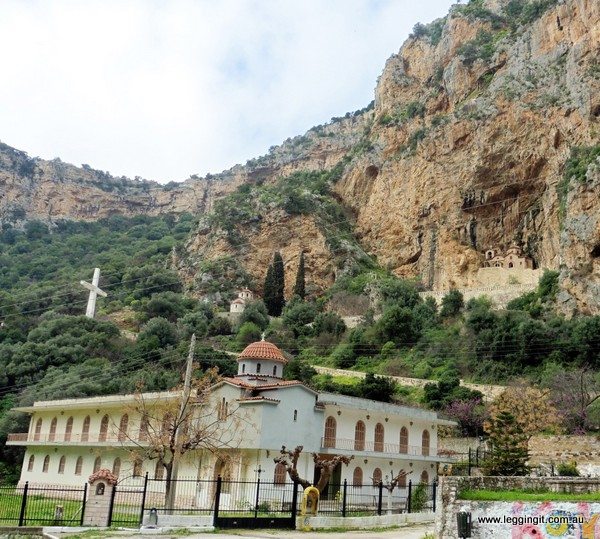 One ranger we passed through had a collection of Monasteries and chapels perched on the side.

As we arrived in Patras we were amazed at the Rion-Antirion bridge which crosses the gulf of Corinth. It looks really cool with all the cables leading from four towers. It’s supposedly the worlds longest fully suspended bridge and one of the world’s longest multi-span cable-stayed bridges .
Arriving in Patras we soon found our hotel was right in the heart of the pedestrian mall and the parking was actually paid parking a few streets away. Hotels which advertise parking but actually don’t have any, really are annoying because it’s just another hidden cost. After checking in we parked the bike up down the mall and went for a wander around the city.

The heart of the city is criss crossed by a number of long pedestrian only streets. As Patras is a university city around the centre there’s all sorts of bars, cafes and restaurants overflowing with lots of young people. It gives the city a real sense of vitality. The centre although vibrant also looks a little edgy with abandoned buildings and graffiti everywhere. It’s one of the defining features of the bigger Greek cities it seems that although the economy’s weak there’s still enough money for spray paint and nobody cares to stop it or clean it up. 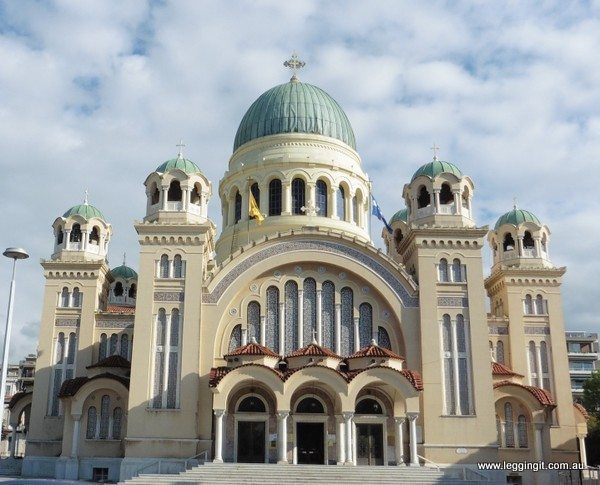 Not far from the centre is St. Andrews Cathedral. It’s the largest Orthodox Cathedral in Greece. Construction started on the cathedral in 1908 and was inaugurated in 1974. On the outside the main dome is topped by a large gold cross representing Jesus and around it are twelve smaller crosses on the other domes representing the twelve disciples. It’s quite impressive inside with mosaics in red and white marble on the floor and mosaics of the saints on the ceiling. 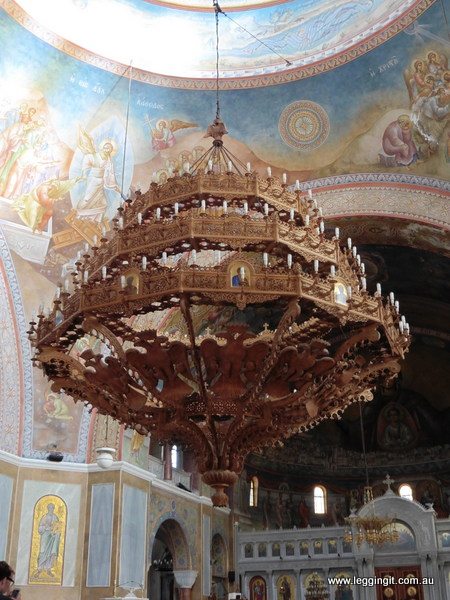 The huge wooden chandelier in the centre adorned with eagles is an impressive display of craftsmanship. The cathedral also houses relics of St Andrew. In a special silver mitre, part of the cross St Andrew was martyred on, a finger, and the top of St Andrews skull are on display. It seemed a bit creepy to be looking at the relics with people praying there. The relics were transferred from the St Paul’s in Rome in the 60’s.
Using the map provided by the hotel we walked around the city checking out the various parks, shops and the port. Just off the centre the buildings are grubbier, the people look a little hard bitten, rubbish and graffiti is everywhere. It really was pretty uninspiring. After dinner at a local restaurant we headed back to the hotel. We’re glad we are only staying one night before heading on to Athens tomorrow.