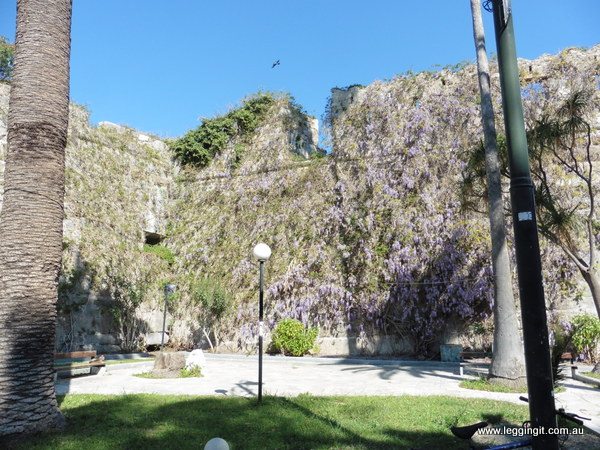 It was pretty hard getting Michele out of bed after last night drinking ouzo. Our plans of an early start to ride the length and breadth of the island of Kos went out the window as workmen with sledgehammers were busily hammering the inside of Michele’s head. To make it worse we were greeted by one of the sunniest days so far. There was no chance of sleeping as the sun bored through our eyelids.
Luckily, next door to the hotel was a coffee shop so we grabbed a takeaway and sat on the balcony of the hotel.
After packing the bike Michele spotted a sarong at the Bikini shop across the road so she investigated. Sure enough she found a sarong which suited her and at this stage we discovered that the owner was from Australia. She had come back to visit the island of her parents, met a guy got married and lived in Kos happily ever after.

After departing with her sarong we headed to the port of Kos to purchase our tickets for the ferry to Bodrum. It turned out fairly easy with the tickets costing €74 for the two persons and the bike. They also rang the green card insurance in Bodrum and purchased two months insurance for us for €100.

Nick at Sardelles Restaurant suggested we check out the centre of Kos Town so after sorting the tickets we headed into the centre.

Once again we were surprised by the friendliness of the locals as they greeted us and made us welcome. It seems we are the first tourists of the season so we are being treated like royalty.

The town of Kos most dominant features are the old fortifications which stretch from the port into the town. They were built by the Knights of St John who also held Bodrum Castle and the island of Rhodes. When the Island of Rhodes was captured by the Ottomans in 1423, Bodrum and Kos were handed over as part of the surrender agreement. 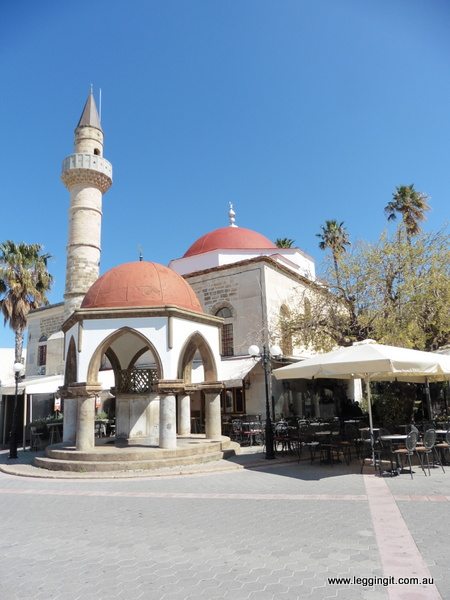 These days the fortifications add a bit of flavour to the town. Around the centre of town is an old mosque converted to a coffee shop, the old agora, Byzantine ruins, and a mix of old ottoman and newer greek buildings. In the market square is the perfect spot for a coffee. One of the waiters told us how he’d visited Port Kembla in Australia many years ago whilst working on a ship. We both know Port Kembla pretty well so it’s funny how small the world is.
After another coffee we headed off for a ride. It seems funny to be only about five kilometres from Turkey. The wind was pretty cold and gusty despite it being sunny so a swim in the Aegean Sea was out of the question, no matter how to it was. 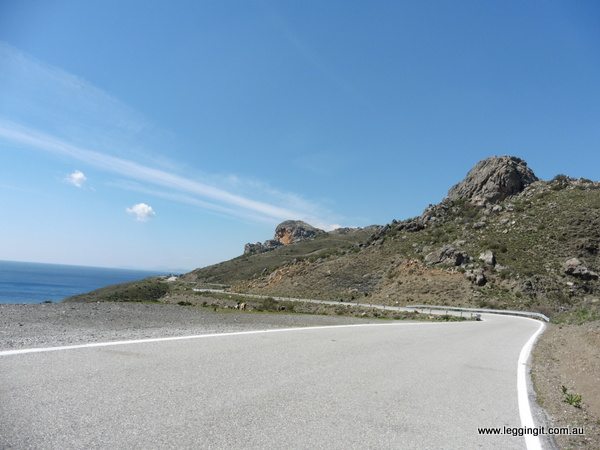 Firstly, we headed south to the end of the island before heading north tracing the coast. The island of Kos, Greece obviously makes a lot of money through tourism as there are lots of tourist hotels, hire company’s, and resorts. Most of them are closed at the moment awaiting the tourist season.

The island has been hit by a down turn in tourism due to the Syrian refugee crisis. With all the stories circulating tourists had been too scared to visit. We wonder how lots of places in Greece are coping with firstly the financial crisis and secondly the impact on their biggest industry by the press and social media. We saw a few abandoned life jackets on one the beaches but it is a long way from Kos Town. According to the locals. they haven’t seen many refugees in town at all. They were mainly along the stretch of beach closest to Turkey and when the refugees were on the island the locals said they were no bother at all. Sadly the media hyped it all up and now the Island suffers.
Kos really is a beautiful island with lovely beaches and beautiful blue waters surrounding it. A massive mountain range runs along the back of the island. Between this and the coastal resort towns locals farm crops and raise a few cattle. At this time of year it’s pretty sleepy and it’s definitely the best time to get a local experience. 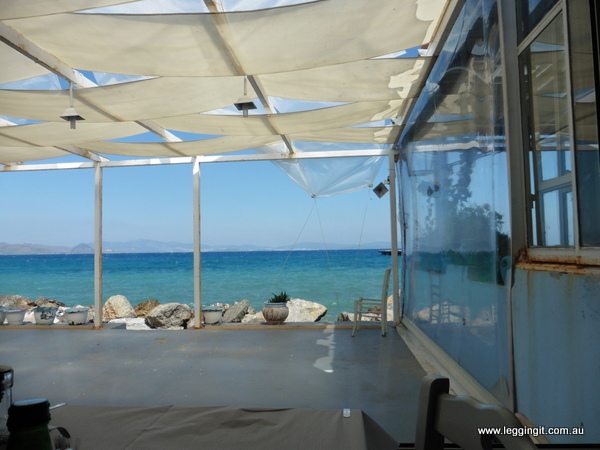 Heading back into Kos we found a seafood Taverna to taste some local grilled sardines and Calamari. It was a great spot overlooking the beach however, Michele’s dream of drinking ouzo on the beach of a Greek island didn’t happen.. . she’ll just have to settle for last nights drinking ouzo at a nice taverna across the road from the beach instead.
After lunch we headed for the ferry. The ferry was due for departure at 4pm so we had to check back about the green card insurance for the bike. If the bike arrives without a green card it will be impounded for 24 hours until it gets sorted out. After numerous telephone exchanges and sms photos of our registration papers they finally got it sorted. We paid the office at Kos and the agent would be waiting with papers in Bodrum, simple.

Customs clearance was fairly simple but to make it a little harder a customs official demanded insurance paperwork. Initially I thought she meant green-card for turkey but after showing my European insurance I was allowed to depart.
Whilst waiting to board I met a couple from Ireland. Merlin and his girlfriend were bike enthusiasts so of course we got chatting. It turns out Merlin runs a bike breakers in Wicklow so he might be a handy contact when we go to Ireland later in the year.

After everyone boarded the ferry they lowered the rear ramp and I loaded the bike. The ferry was a little bobby so finding a ratchet strap I lashed the bike down securely. 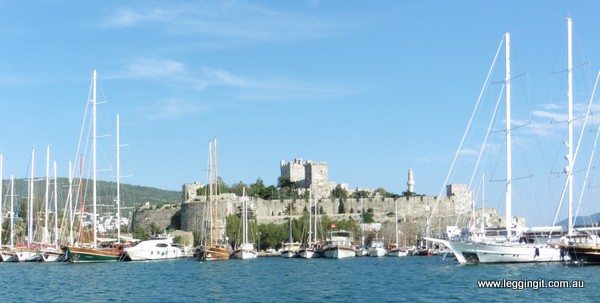 The trip across to Bodrum was fairly quick, only about 35 minutes and we were really surprised with our first glimpses of Turkey. Bodrum castle overlooks the harbour which is filled with luxury yachts and cruise boats. The wooden cruise boats with their high wooden masts would be perfect for sunset cruises along the coast.

After docking in Bodrum we parked the bike on the wharf and cleared customs. Waiting on the other side of the customs desk was the insurance agent with our insurance paperwork. He pointed us to the customs office, where after a twenty minute wait the customs official arrived, entered our information into the computer and stamped our passport.

The whole procedure was quite stress free and we were so glad to buy the insurance at the ticket office in Kos, Greece. It saved us getting the bike impounded for 24 hours until the paperwork was sorted.

The Centro Hotel was situated not far from the marina on a street filled with restaurants, cafe’s and hotels. All around the area are lots of beautiful white washed apartments and mansions. After checking in we headed back to the marina for a walk along the promenade. There are all sorts of high quality restaurants, cafe’s, bars and shops along the strip. Even though it’s off season the whole area was packed. We were quite surprised how opulent the area seems to be. It goes against all the impressions we get from the small amount of media we see.
We found a really nice restaurant for dinner overlooking the marina. Reflecting over the last few weeks in Athens we were feeling pretty drained. Maybe it was being in a big city, or the graffiti and filth. The brief visit to Kos, Greece and now landing in Bodrum we are feeling really recharged and looking forward to exploring Turkey. Bodrum was a great way to start our Turkish adventure. Tomorrow we’ll explore Bodrum and the castle.