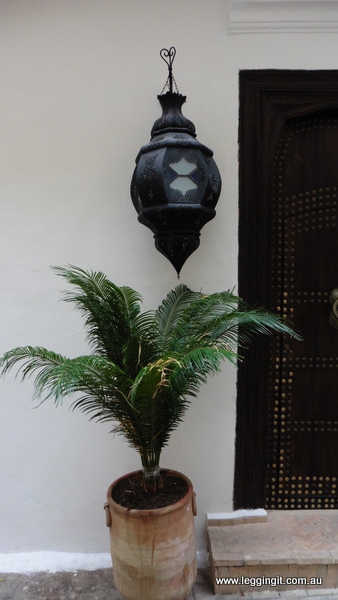 Today we ‘re off to Morocco so we were up early, well earlyish if 8 am is early. After breakfast at a local Cerveceria it was time to load up the bike. It was a shame to leave the hostel as the room had its own balcony which led from the room across the roof. It was about the same size as the room, with a table and chairs. The owners greeted us by name whenever we came and went showing real hospitality.

The ride down to Algaciras took us through all different landscapes. Firstly sweeping planes surrounded by low foothills around Seville. Then rolling hills as we reached Jerez. It all looked like rich fertile soil good for grain crops.

As we reached Cadiz the wetlands spread before us and the salt evaporation ponds and piles of salt lined the road.

Just past Chiclana the hills started becoming taller and the countryside a little rougher. Along the way we passed a few of the white villages high on the hills. Coming into Tarifa we were greeted by wind farms hundreds of wind turbines line the hills and valleys it’s quite amazing but not fun to ride in.

At the top of the range overlooking Tarifa, about 10 km’s from Algeciras, we stopped off at the cafe to take in the view of the strait. Gibraltar and Algeciras to the left, Tarifa to the right and straight across the strait the rugged coastline of Morocco.

There were only a few cars lined up when we arrived at the terminal and an two officious looking guys were walking up the line of cars filling in paperwork. We’d done our homework and printed off the cartel but one of the guys showed us another piece of paper in Arabic and French (two languages we’re struggling to master). After he filled it out for us he asked for money which Ron told him no. His mate came over and after much pleading Ron handed over two euros.

There were cars loaded high with all sorts of things and the springs under stress as every available space was jam packed. Just on 330 pm we passed through Spanish customs who couldn’t find our entry stamps amongst all the stamps in our passports. Lol…. What a pair of international travellers (it could’ve also been that Ron had got my passport wet and the inks had run oops).

After all the trucks and trailers were loaded it was our turn and as we were the only motorcycle we had a prime spot in the middle.

As we got underway the customs desk on the ferry opened and a nice young man processed our visas and we received a numbered stamp which seems that every hotel records. He also greeted us with a warm ‘Welcome to Morocco’ normally  it is a stamp and next!

The weather on the crossing was good and the ferry fairly mild  compared to the English Channel ferries.

As the ferry docked the mad dash started with all the cars and trucks trying to be first off. After un strapping the bike we joined the cavalry charge, following the big green signs reading exit but no sign of the police post where we were supposed to process our

The police post and customs area was quite a distance out of the dock and as we approached we were ushered to a bay and told to park just beyond it. Despite the gates and the booths the way it works here is everyone is told to park under the roof and beyond the gates as the customs collect the paperwork. Then the fun starts as the staff search vehicles. Some cars had everything laid out around their cars in readiness.

Maybe it’s the grey hair or maybe we were lucky but the two customs officers who were handling our paperwork were really nice and after a short while we were ready to go. Our customs officer cracked us up when he asked us if we had a “pistolero?” We of course asked him “do we need one”. As we were riding out it was fascinating watching a man surrounded by the contents of his car kneeling in prayer oblivious to everything going on around him.

Finally as the sun was setting we reached the exit gates and headed for the freeway. As the countryside is quite hilly it became dark really quick. To top it off it started raining and a lightning storm struck. The storm passed pretty quickly but our next obstacle was toll gates. Somehow we’d got on a toll road and as we didn’t have a single Dinar we were stuck.

Ron being of convict stock wasn’t perturbed and simply backed up and rode around the barrier. All the instructions we’d written on the tank bag didn’t match up with anything as signs were scarcer than rocking horse poo. Eventually we took the Tanger Ouest exit and once again hit another toll gate. Ron was ready to ride around the gate but being the Party Pooper that I am (I had visions of Moroccan jails, Ron however in his younger days had a few brushes with the law including a low speed pursuit with a mate on scooters, but enough of that)

I climbed off the bike and went into the admin building where I explained in French, English and sign language that we’d got lost and gotten onto the toll road and had no Dinars only euros. I was pretty pleased with myself as at the beginning of our journey I would’ve found that too confronting and would’ve left Ron to sort things out, this took a while but it got sorted

The road from the toll road into Tanger was chaotic. Large sections were unlit, the surface was pretty dodgy and it seemed everyone was insane. To top it off there were no road signs. By now stress levels were running pretty high, we rode around trying to find any sign of the roads we were trying to navigate in by.

Eventually we just stopped off a Thé shop, had a bite to eat and tried to get wifi, with no success. The waiter asked us where we were looking for and gave us instructions which included once we got to a place ask the police. Well, we rode up and down the street he told us and just as we thought that we were going to get it on google maps the phone died. Argh

All up we probably spent about two hours riding around the streets which were absolutely packed with people being a Friday night. Men dressed in hooded capes were everywhere along with the usual groups of young people.

The instructions from the policeman turned out to be useless as he sent us in the wrong direction and upon spotting the Ibis Hotel sign we decided to call it a day. The staff at the Ibis were really friendly and efficient so not long after we were relaxing in a nice double room planning how we’d find the hotel tomorrow.

2 thoughts on “Off To Morocco”