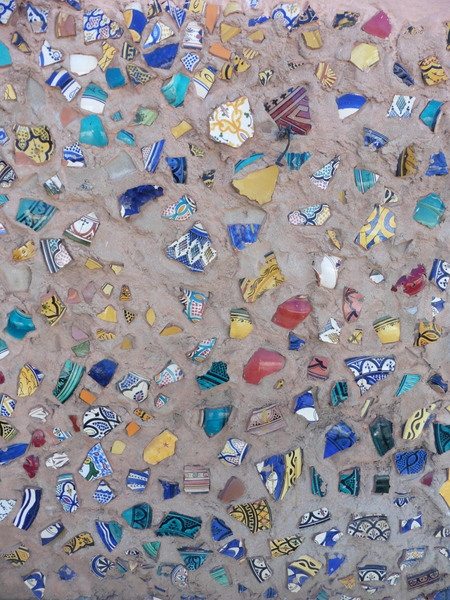 Since we’ve been in Morocco nearly every person we pass on the street calls Ron, Ali Baba because of his ever lengthening beard. In honour of his nickname we’ve decided to unofficially name this blog post about our trip to Safi as Ali Baba and the Forty Thieves, just to set the tone.

Before we went to Safi, we’d been warned by Moroccan friends, to be careful. With comments like “don’t go to Safi it is full of thieves” and “if you go to the Medina make sure you hide your wallet”. So we were very wary when we visited Safi.

First impressions riding in from the south is that it’s an industrial city. It has a lot of expansion towards the south along the coast with groundwork being conducted on what appears to be an extensive resort with a sea wall for a marina underway.

The southern gateway to Safi is through lots of chemical plants and its not very pleasant with all sorts of stuff raining down on the traffic and spewing into the atmosphere. Big outlet pipes empty straight off the cliffs into the Atlantic and on reflection maybe buying fish in Safi wasn’t such a great idea.

We had heard that the beaches around Safi were pretty good, so wanted to check them out. However, after taking a ride down past the port, it was clear the beaches we’d heard about would have to be further north. The coast was rugged and had cliffs leading right up to them. We expected beaches, people playing soccer, surf shops like Essouira and Rabat but there was nothing. As we were leaving a car with surf boards on the roof told the story of someone else who’d been given a bum steer.

On arrival we were greeted with, you can park your bike here…’it will only cost you 5 dinah’ (it cost 10). In the beginning, we felt like movie stars (odd as it sounds)….everyone wanted to talk to us, they wanted to know where we were from, kept saying welcome (as Moroccans do) everyone wanted to show us where to get cheap seafood, where their café was and of course as Safi is famous for it’s pottery..their father’s factory.

So we started by going to the seafront and having fish. Like mugs, we accepted that there was no menu (something we never do). We thought we did ok, agreeing on the price for the grilled fish dish. The thing we didn’t count on was when the waiter said salad, bread etc it would be added on to that cost. Everywhere else we have been on Morocco it is included on the price. The oldest trick in the book and we fell for it.
When we returned to the medina, our ‘friend’ asked was good no? We told him how expensive it was, suddenly it became, “It’s because it’s winter and there’s no fish that’s why the prices are high”. It is still very good price.

Another Moroccan friend’s words were ringing in our ears “Moroccans rip you off because they think they are smarter than you”. Its actually dumb business because although theres a short term gain theres no return business. Well as Le Panoramique restaurant in Essaouira discovered good service, good prices guarantee return business and word of mouth recommendations. As we’ve been in Essoira for a month we’ve there visited most days, the place in Safi will never see us again.

The Safi medina is like most of the other ones we’ve visited, with the same things of course for sale. However Safi’s claim to fame is its pottery and there’s more than enough guys ready to escort you to their ‘father’s factory’. 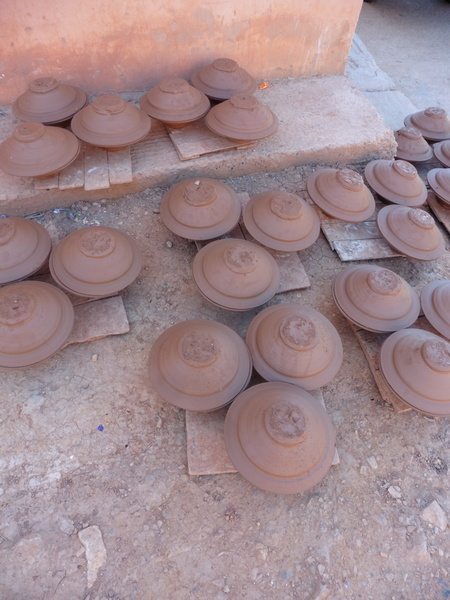 Unfortunately we let our guard down as we were interested in what appeared to be hand made pottery. We had visions of potters in small sheds turning out individual works. A local salesman was walking with us and offered to show us the factory, just around the corner. It wasn’t just around the corner but rather a few blocks away up the hill.

The factory was a jumble of buildings containing different parts of the process from mixing the clay, shaping, different kilns, glazing, and sculpting. It was quite interesting especially the demonstration on a potters’ wheel. In a short while the potter had transformed a piece of clay not much bigger than a bottle of wine into a bowl, an ash tray, a tangine and a candle holder. The sculptor was also fascinating using tools made from bits of sardine tins he cut the clay on the shaped items to provide intricate shaped patterns prior to firing in the kiln.

The inevitable came with a visit to the exposition. All local potters supposedly display their wares in the two room showroom. The money is shared between all the workers in the factory. As we travel on a motorcycle, we were straight up with them telling them that we weren’t thinking of purchasing anything. We also explained about the blog and how we were happy to write something about them.

There were some really nice items and feeling pressurised to buy something when we asked the prices. With our friend’s words were ringing in our ears “Safi it is full of thieves”. We were a but stunned when straight faced thy told us that four small vases (for key rings) about 4 cms long were 15 each. 15 Dirhams was a fair price and we started selecting four to use for couch-surfing gifts. The price suddenly became 15 euros each, thinking that they got their dirhams and euros mixed up we asked again, yes we heard them right 15 euros for something you can buy for 2 in most places.

They were arguing how it was all handcrafted and how long it took to make. It didn’t take a rocket scientist to work out they weren’t hand made,. It was like good cop bad cop with the boss coming the heavy and the salesman long faced saying how he can get us a good deal.

As we started to walk out the door the offer was reduced to €5 each, still a ridiculous price in any language. So paying the salesman quite well for an interesting tour we left without any items.

Thinking back they used a tried and tested method of relieving tourists of their money. The salesman gains the persons trust and then isolates them. In this case we were taken to a smaller second room where three staff confronted us putting pressure on us to buy. 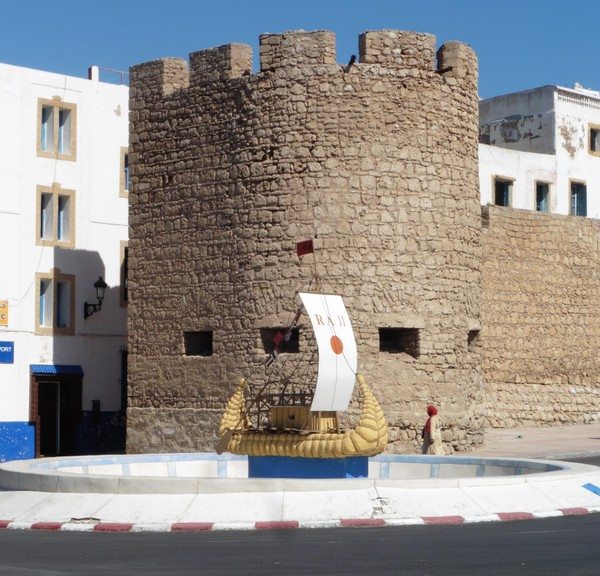 On a happier note we noticed a monument to Ra II, the papyrus ship which Thor Hyderdahl in 1970 sailed from Safi to Barbados. We remember the National Geographic stories. Thor also sailed the Pacific Ocean in the balsa boat the Kon Tiki. After a bit of research we found that Ra II is in the Kon Tiki Museum in Oslo, Norway. It’s now on our list of things to see in Norway.

After our visit to Safi our suggestion is…. Wind your windows up, lock your doors and keep driving because even Moroccans think Safi is full of thieves. There are plenty of lovely places to visit in Morocco without going here.

On a side note if you’re interested in handcrafted pottery one of the best places we’ve visited is on the Coromandel Peninsula on New Zealand’s North Island not far from Auckland.

2 thoughts on “Safi Is Full Of Thieves”