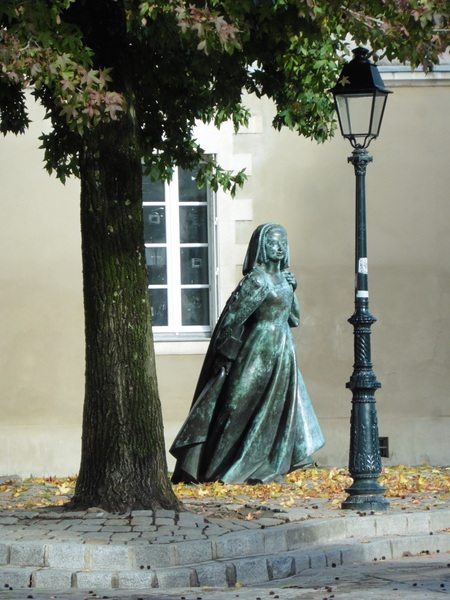 It was lovely to be able to walk to the local bakery to purchase fresh baguettes. Where else but in France can you do this. The weather cleared to a lovely autumn day as we headed out to explore Nantes. Near the apartment we were surprised to see bananas growing in the centre of the roundabout. The weather in Nantes must be quite mild. 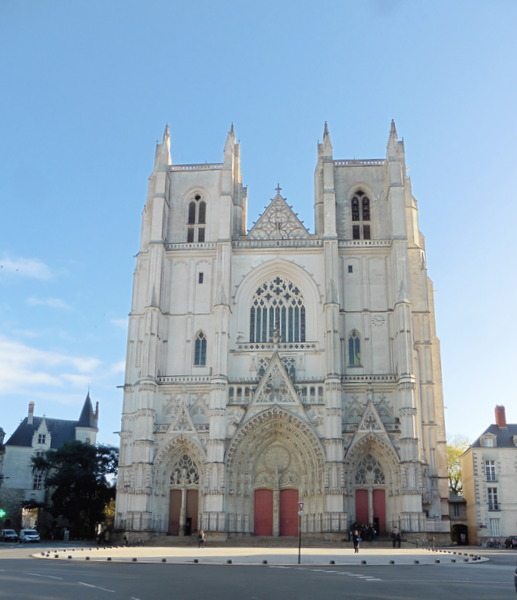 Using the app we navigated our way to our first stop, the Cathedrale St Pierre St Paul. The gothic cathedral was built over an existing Romanesque cathedral in 1434. However like most cathedrals construction took hundreds of years to finish. Four hundred and fifty seven to be precise . The cathedral has traditional square towers either side of the facade. In true gothic style the cathedral has a high vaulted ceiling and long windows making it light and airy The cathedral was damaged by a fire in the ceiling in 1972 and as a result there are still traces of the fire. 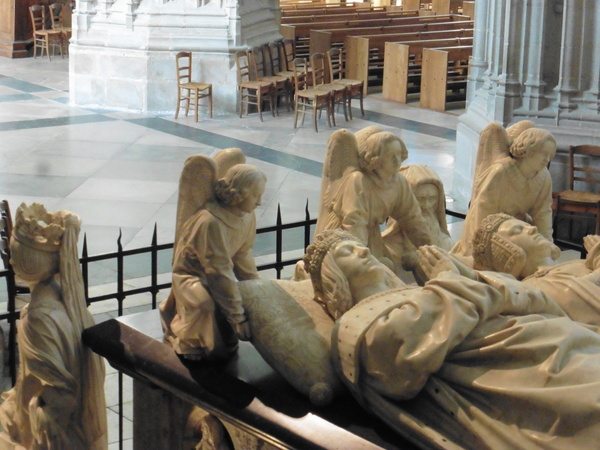 On either side of the transept are the tombs of Francis II, Duke of Brittany and of his wife Marguerite de Foix, and General de Lamoricière. The tomb of Francis and Marguerite was originally in the Carmelite chapel. However, during the revolution the tomb was dismantled and hidden because it was feared the revolutionaries would vandalise it. The Carmelite monastery was destroyed and 18th century the tomb along with the bones of the Duke, his two wives and his father Arthur were interred at the cathedral. The tomb is crafted from marble with the bodies of Francis and Marguerite lying side by side. Their heads rest on pillows held by angels. 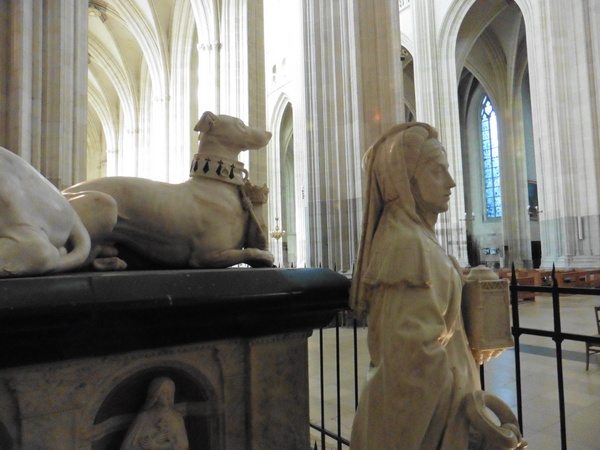 A greyhound (the sign of fidelity) lies at Marguerite’s feet whilst a lion lies at Francis’. On the four corners of the tomb are the statues representing courage, justice, temperance and prudence. Around the tomb are statuettes of the twelve apostles and beneath them black hooded mourners. It’s quite an exquisite piece of craftsmanship with lots of symbolism. 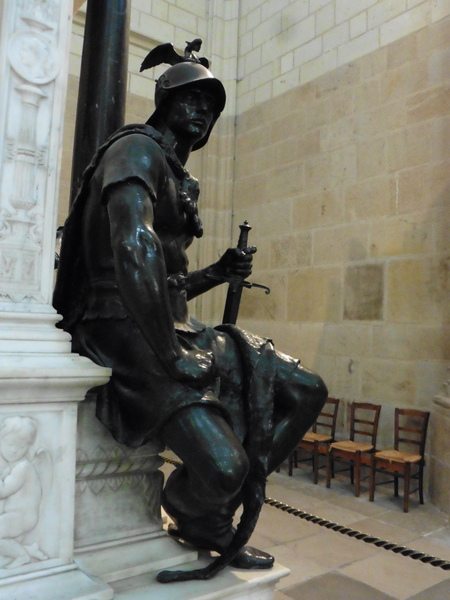 On the opposite side of the transept the tomb of General Christophe Léon Louis Juchault de Lamoricière is quite simple. The former general was war minister in the French Republic in the late 1800’s. Although part of the 1848 revolution he fell from favour of Louis Napoleon as he was critical of his policies. After the coup which saw Louis Napoleon crowned Napoleon III he was arrested and exiled. He refused to submit to Napoleon III. He was offered and accepted the post of leading the Papal Army in Italy against the Garabaldi’s Italian Army. The papal army was defeated and he went into retirement. After his death in 1865 the pope commissioned the tomb in his honour. 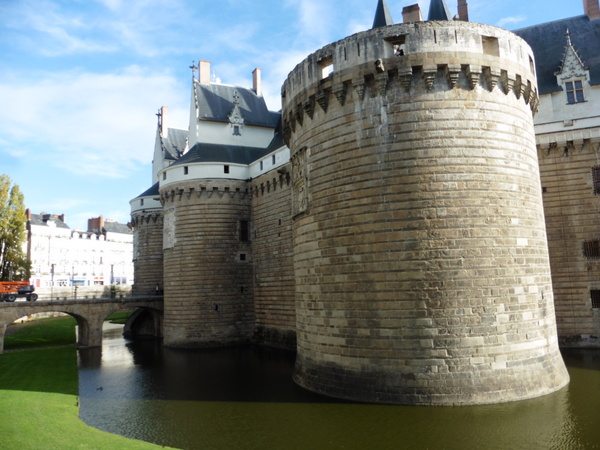 Our second place to visit was the nearby Château Des Ducs De Bretagne. The Chateau was built in 1466 by Francis II, Duke of Brittany. It was built over a previous castle with a moat fed by the nearby Loire river.
The chateau was built with seven defensive towers and retained the tower of the original fortresses. As Brittany was separate from France the chateau was built as a royal residence. It was also built to house an army big enough to withstand the French Army. In 1532 Brittany was absorbed into the french kingdom and the Chateau became the French kings royal residence whilst in Brittany. 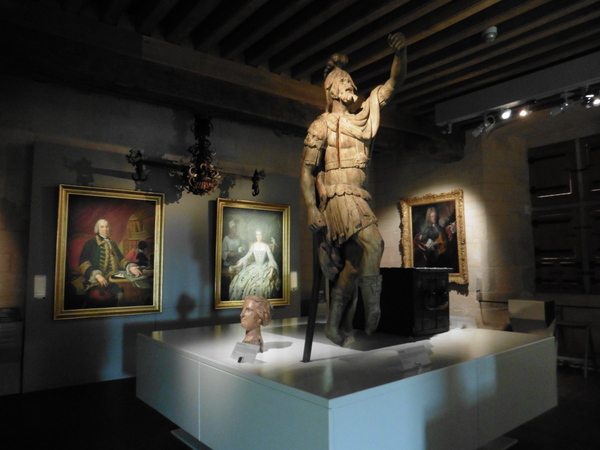 The castle is home to the Museum of Nantes which is housed in the grand Logis. The museum is separated into seven separate sections which trace the history of the castle, Nantes and Brittany. It is a very impressive display which is supported with an audioguide. One of the most interesting displays is on Nantes involvement in the slave trade.

During the 18th century Nantes became very wealthy from the slave trade. Around Nantes are many stately houses built to look like chateaus which are evidence of the wealth created during the slave trading period. The museum also tells the story of different personalities involved in the trade. Other sections of the museum cover Nantes during the revolution, the industrialisation of the city, the war years and modern Nantes. We learnt how the city changed when the old city walls were demolished in the 18th century. Large boulevards and Haussmann style architecture which was all the flavour in Paris spread to Nantes creating what we see today. In the end we spent the best part of the morning exploring the museum. It was such a fascinating exhibition with all sorts of exhibits and supportive multimedia.

Icon, The Treasures of Refugees 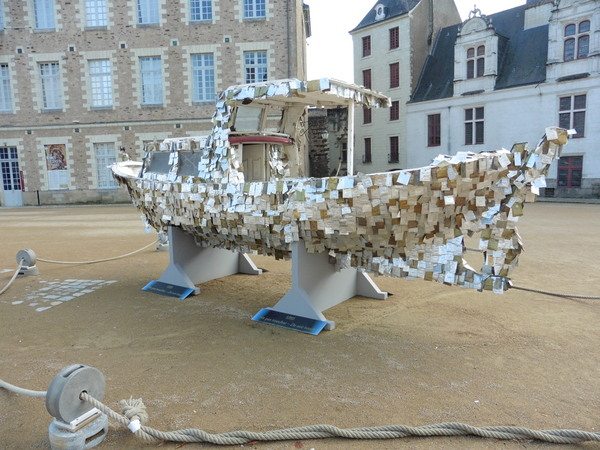 In one of the other buildings of the chateau Michele visited the exhibition entitled “Icon, The Treasures of Refugees”. It was an exhibition of the 1,300,000 Greek refugees who in 1923 were expelled from Turkey as part of the population exchange. The exhibition told the stories of the Greeks who expelled from Turkey sought a new homeland in other countries such as France and the US. The stories were told brought the use of icons and personal treasures no matter how small. The boat in the chateaus courtyard was also part of the exhibit. Covered in votives the refugees had nailed to it in thanks for salvation in a new land.

The Chateau cost €8 to visit and opening hours are here. 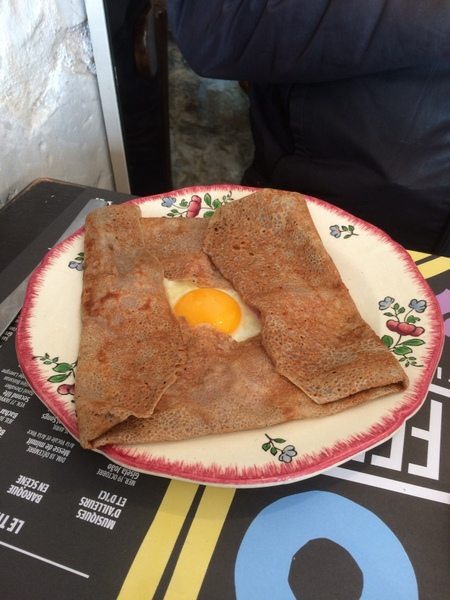 After visiting the chateau it was lunchtime and we were able to find a a small cafe cooking Breton galettes. The buckwheat pancakes are a real tradition in the area and no visit to Breton would be complete without a galette and cider.

The dessert of course was a Breton pancake. They’re made with a little cider to give them a slight apple taste. Michele had hers with Salted Caramel  however I stayed with traditional sugar. It was a delicious lunch. 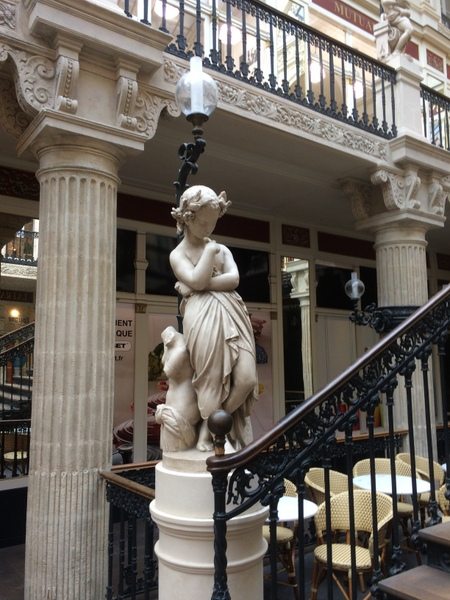 Next stop was a shopping centre, yes unusual for us but this is quite unusual. Opened in 1843 Passage Du Pommeray is named after the developer. His dream was to turn a poor dangerous part of the city into a shopping area worthy of Paris. The result is stunning, a huge staircase and balconies edged with statues makes this centre quite unique. It is also one of the first places where merchants could actually put their wares on display in large windows, before this stock was kept on dark shelves. The arcade is now filled with quaint shops selling sweets, high quality clothes, shoes, curiosity show shirts, ties, chocolate, gifts, handbags and souvenirs. It really was a nice stopover before we headed on to…

The Memorial to the Abolition of Slavery 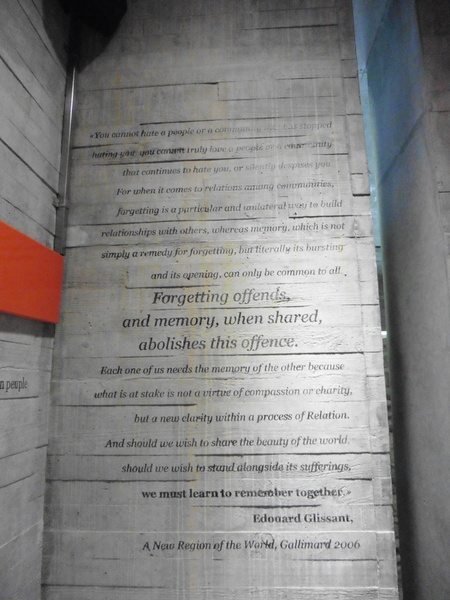 Afterwards we headed along the Loire river where a riverside walk lead us to the Memorial De L’Abolution De L”Esclavage. (The Memorial to the Abolition of Slavery). It was a fascinating memorial which has hundreds of lights in the footpath with the names of all the slave ships. On the wharfs where the former slave ships left from the memorial takes the form of of the hold of a slave trader. We descended below the wharf into the hold where the curved side of the “ships hull” and overhead beams of the “ships timbers”set the scene.
The memorial traces a timeline of slavery within the world and years when it was abolished within different countries. It is quite surprising to see how recent slavery was in many of the “civilised” countries. Also on the hull are quotes on slavery from famous people. It’s quite a thought provoking monument. It is also quite fitting that it should be located in Nantes, as 45 percent of the 4,000 slaving expeditions left from Nantes.

The Memorial to the Abolition of Slavery is free to visit, opening hours are here. 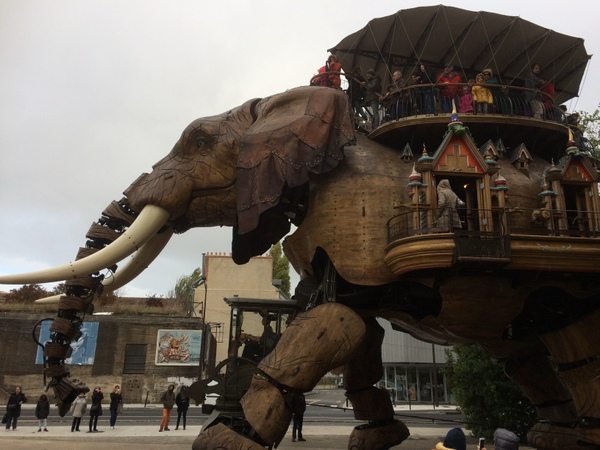 From the monument we crossed the bridge and headed to Machines De L’Ile. The Machines De L’Ile is part artistic, part Jules Verne attraction on the site of he old Nantes shipyards. It’s separated into two parts the Marine Carousel and the Machines Gallery which includes the workshop. Machines De L’Ile seeks to replicate animals with machines. When we arrived at the gallery we saw the star of the exhibition, the great elephant, in action. The 12 metre high Great Elephant is made from 45 tons of wood and steel. It can carry up to 49 passengers and features animated legs, trunk, head and ears. It was quite amazing seeing it emerge from the shed. The Great Elephant does tours around the vacant area which forms the former ship yard. 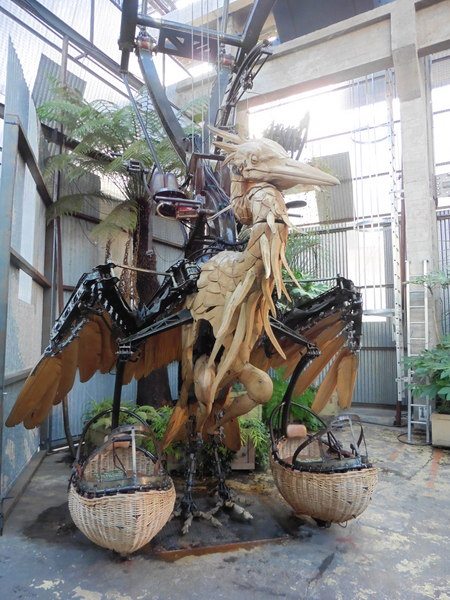 We purchased tickets for the gallery which gave us access to the gallery and workshop. Inside the gallery were different machines including spiders, caterpillars, ants, a heron and others. The machines were quite fascinating especially the ant and the heron which we saw being ridden. In the future the Heron with become a ride outside at the front of the gallery. It was disappointing that everything was in french. The Marine carousel is based on sea creatures of Jules Verne and built from steel.

A 40 minute ride on the elephant, a ride on the carousel and gallery would cost €25:50. Despite all the hype we were pretty disappointed with the Machines De L’Ile. It’s been running since 2007 but it seemed like it was a work in progress which is still in the early stages.

Nantes really is a beautiful city to explore and we really enjoyed our day discovering the highlights.

2 thoughts on “Nantes On Foot”